Class of 2018: McIntire Grad from Nicaragua Creates Family on Grounds 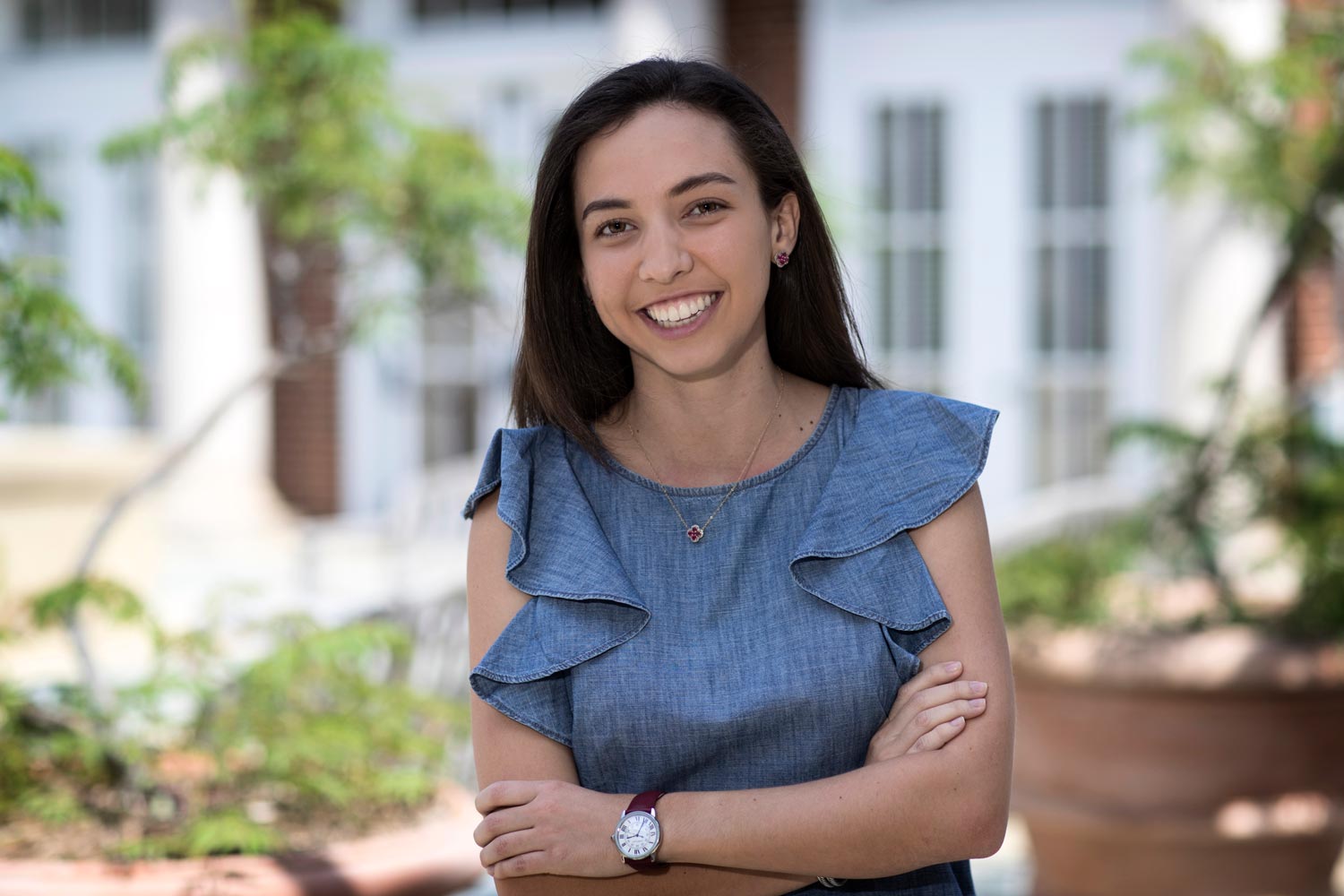 Family – both at home at on Grounds – is all-important to Maria Ernestina Castillo. Not surprisingly, her peers call her “Mom.” (Photo by Dan Addison, University Communications)

Sherri Moore had to take a picture. It was the perfect moment in a perfect, picturesque setting.

The University of Virginia professor had led a group of 24 students up Table Mountain, a prominent landmark that overlooks the city of Cape Town, South Africa. They were there as part of a Global Commerce Immersion program, but taking a break from academics for a quick hike. Moore took a step back, anxious to snap a photo of her students.

Moore fell, ultimately breaking a bone in her foot that required surgery.

Maria Ernestina Castillo was the first student to Moore’s aid. And Castillo rarely left her side.

Castillo, who is the president of the Latino Student Network and will graduate this month from UVA’s McIntire School of Commerce, pushed her professor around in the wheelchair at the hospital. She got her plate for dinner. She checked in regularly.

“She doesn’t ask you if you need help; she just does it,” Moore said of Castillo. “Nice to have someone like her. … She literally just did it all. Like having a daughter.”

All in the Family

Family is everything to Castillo.

Her middle name, Ernestina, goes back four generations, to the grandmother of her grandmother, who owned a retail store and was one of the first female entrepreneurs in Nicaragua. “That name gives me so much pride,” Castillo said.

Every Sunday, at 12:30 p.m. on the dot, as many as 18 family members gather at her grandmother’s house for lunch. When she gets a chance to return to her native Managua, Nicaragua, Castillo calls a week ahead to place an order for lunch. “It’s so important,” she said of the tradition. “We get together to talk about life.”

Castillo has accepted a job in the Latin division of asset and wealth management with JP Morgan, starting after graduation. She was given the choice to live in New York or Miami. It was no choice, really – Miami is only a two-hour flight from home.

“For me, family is the most important thing in life,” Castillo said. “Family is the priority. It’s the No. 1 thing.

“Coming to UVA, it was really hard, because I was no longer close to them.”

Castillo, though, made another family, here on Grounds.

After two years as a member of the Commerce School’s Latino Student Network, Castillo took a leadership role, first as vice president and then, this year, as president. But she’s more than just the president. Many of the 50 members of the organization “joke around and say that I am the mom of LSN,” Castillo said.

During her time as president, she organized employers’ visits for information sessions, helped lead résumé workshops for students and, most importantly, focused on relationship-building within the organization.

One highlight of the past year was a team-bonding trip to the Escape Room in downtown Charlottesville.

“It taught us the importance of communications and working on teams,” she said. “It was a little competitive, too.”

To strengthen the mentor-mentee relationships within the organization, Castillo made it a requirement that before the tandems could attend events, they had to send her a photo of them having fun – and not at school.

“We want to help them academically, but also emotionally,” Castillo said of the mentor-mentee relationships. “We want to be there for them. We want them to know there is this community within (McIntire) that is willing and wants to help them succeed.

“To come to such a huge university as an international student is kind of scary. But we want to make sure they know they have a community that is going to back them up. For me, that’s amazing.”

For the Latino Student Network, like her time taking care of Moore and her broken foot, Castillo did everything. If the group needed food for an event, she handled it. If transportation was needed, she got it. If a younger member needed extra time, she gave it.

“She never sees anything as an obstacle or a problem,” Moore said. “That’s the attitude she has. Can-do. And will-do. She is the leader you want.”

At Home in McIntire

Getting the Maria Ernestina Castillo tour of McIntire’s Rouss-Robertson Hall is a treat.

She’ll guide you through the main fourth-floor lobby, down the stairs, pointing out highlights, saying hello to an endless stream of people and telling a few quick stories along the way. All in about five minutes.

Castillo has an apartment here in Charlottesville, of course. But it’s more like a hotel. She’s there to sleep, and that’s about it. McIntire, really, is her home.

She goes to class, meets with Latino Student Network members and, especially, spends time with professors.

“I love having lunch or coffee with professors,” she said. “That’s why I don’t eat that much at home. I see professors as valuable assets that I can learn from. They want to see you succeed, not only in their class … but in life. That’s what professors here at McIntire have taught me. They want to help you in life, you are not just another student.”

That became clear to Castillo shortly after meeting Moore, her mentor, friend and “second mom.”

On the first day of class, Moore told her students that she did not have office hours. Her door was always open for students.

“I took that seriously,” Castillo said.

Moore was glad she did. Frequent visits led to a vital relationship, for both of them.

“She is so easy to fall in love with,” Moore said. “She’s so positive. Such a great person.

“It’s just the way she is. She cares. I’m very fortunate to become friends with her.”

How a Single Email Changed a Life END_OF_DOCUMENT_TOKEN_TO_BE_REPLACED

Fall Is in the Air on Grounds END_OF_DOCUMENT_TOKEN_TO_BE_REPLACED

At UVA, There Is a Club for Everyone END_OF_DOCUMENT_TOKEN_TO_BE_REPLACED