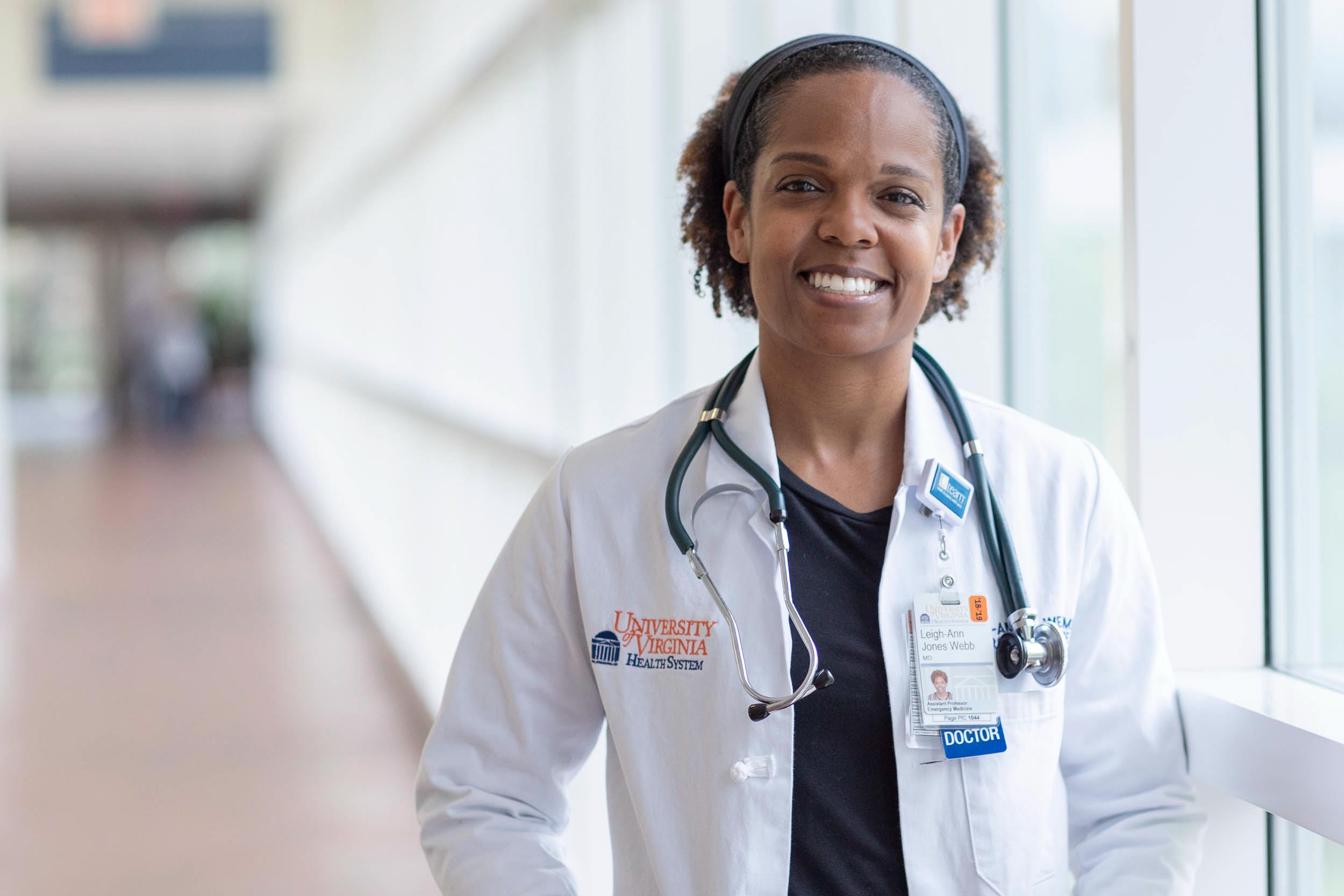 Growing up in Appomattox, Leigh-Ann Webb dreamed of attending the University of Virginia.

Suffice to say, the dream has come true – and then some. By a multiple of three, to be exact.

This week, the emergency services doctor in the UVA Health System and assistant professor of emergency medicine in the School of Medicine (who also holds a dual appointment in the Department of Public Health Sciences) will earn an executive MBA from the Darden School of Business and become a “Triple Hoo,” a term reserved for three-time graduates.

Webb – who met her husband, Cameron, when they were first-year undergraduate students at UVA – previously earned a degree in kinesiology from UVA’s Curry School of Education and Human Development in 2005 before graduating from the UVA School of Medicine in 2009.

The cherry on top: As a result of a Darden course she took, the mother of two has launched a company that aims to improve a patient’s time in a hospital.

The feeling has been mutual.

Webb is the epitome of what Darden seeks in its executive program students, according to assistant dean Barbara Millar.

“Leigh achieved success in the program, while also serving as an emergency room doctor and raising a family,” Millar said. “If that doesn’t reflect a drive and commitment to continuous learning and professional development, I don’t know what does.”

During medical school, Webb thought she would go into anesthesiology, but a final hospital rotation during her fourth year of medical school – that she signed up for almost on a whim – changed everything.

Needing to fill out her schedule, Webb did a two-week rotation in emergency medicine. The daughter of a pastor and stay-at-home mom, she knew right away she had found her calling.

Webb especially liked the fact she could be the first person to evaluate a patient.

“It was the front door to the hospital and you could evaluate and treat everyone, regardless of their ability to pay,” she said. “I loved the way I could order a test and it would come back the same day.”

Webb went on to do her residency in emergency medicine at the University of Chicago. She subsequently worked at hospitals in North Carolina, New York City and Baltimore before coming back to UVA in 2017 with Cameron, a UVA assistant professor of medicine in the Division of General, Geriatric, Palliative and Hospital Medicine (and the featured speaker for Saturday’s Final Exercises ceremony).

In the nine years Webb has worked in health care, she’s noticed its landscape changing, with business playing a more vital role than ever. Emergency departments have become overcrowded, and many patients just don’t have the resources that they need.

Webb felt she needed to expand her skillset.

“I wanted to see if there was something else I could do to contribute to health care beyond the clinical aspect,” Webb said. “I still loved taking care of patients, but was just like, ‘There’s something more to this.’”

I felt like I was in the medical bubble for a really long time. … I really wanted that multi-disciplinary professional interaction. – Leigh-Ann Webb

“I chose Darden because I wanted to have a broader view of the world,” said Webb, who visited China, South Africa, Europe and India. “I felt like I was in the medical bubble for a very long time, starting from when I was an undergraduate student through medical education and the practice of medicine. I married someone in the health profession and many of our friends are in medicine as well.

“So I really wanted that multi-disciplinary professional interaction.”

Webb said working with classmates – all professionals from other fields – was one of the most valuable parts of the experience.

“Everyone came in with their expertise,” she said. “Whether they were looking to climb the ladder or pivot into something else, it was amazing working with them – going through the case method and just absorbing and learning from other people who think so differently from each other, because everyone is from different spaces.

“For me, that was definitely the advantage over a health care MBA exclusively for physicians.”

Toward the end of her time at Darden, Webb took an entrepreneurial course in which her class project, born from an idea she and her husband thought of during a recent road trip, led to her starting “The Get-Well Company.”

“The question we asked ourselves is how we might use empathy and innovation to revolutionize patient experience, while they’re in the hospital dealing with all of the lifestyle disruption that comes along with that,” Webb said.

Webb’s answer is a digital platform that serves as a gifting service – still in the very early stages of development (she’s not planning on giving up her day job just yet) – that can link patients and their caregivers to much-needed services. Their village will be able to use social payments to chip in for gifts that mitigate the disruption of being admitted to the hospital – from comfort items to upgraded toiletries to concierge services such as errand running and house cleaning.

“I envision people using it with friends and family to provide practical, doctor-curated gifts when somebody they know is admitted in the hospital,” Webb said.

Webb, who has devoted many nights and weekends to the project, all while continuing her clinical work and raising two young children, laughed when asked if she would be going back to UVA in the future for another degree that could make her a “quadruple Hoo.”

It’s Copperhead Season in Virginia. Here Is What You Need to Know END_OF_DOCUMENT_TOKEN_TO_BE_REPLACED

What’s Next for UVA’s Class of 2022? END_OF_DOCUMENT_TOKEN_TO_BE_REPLACED