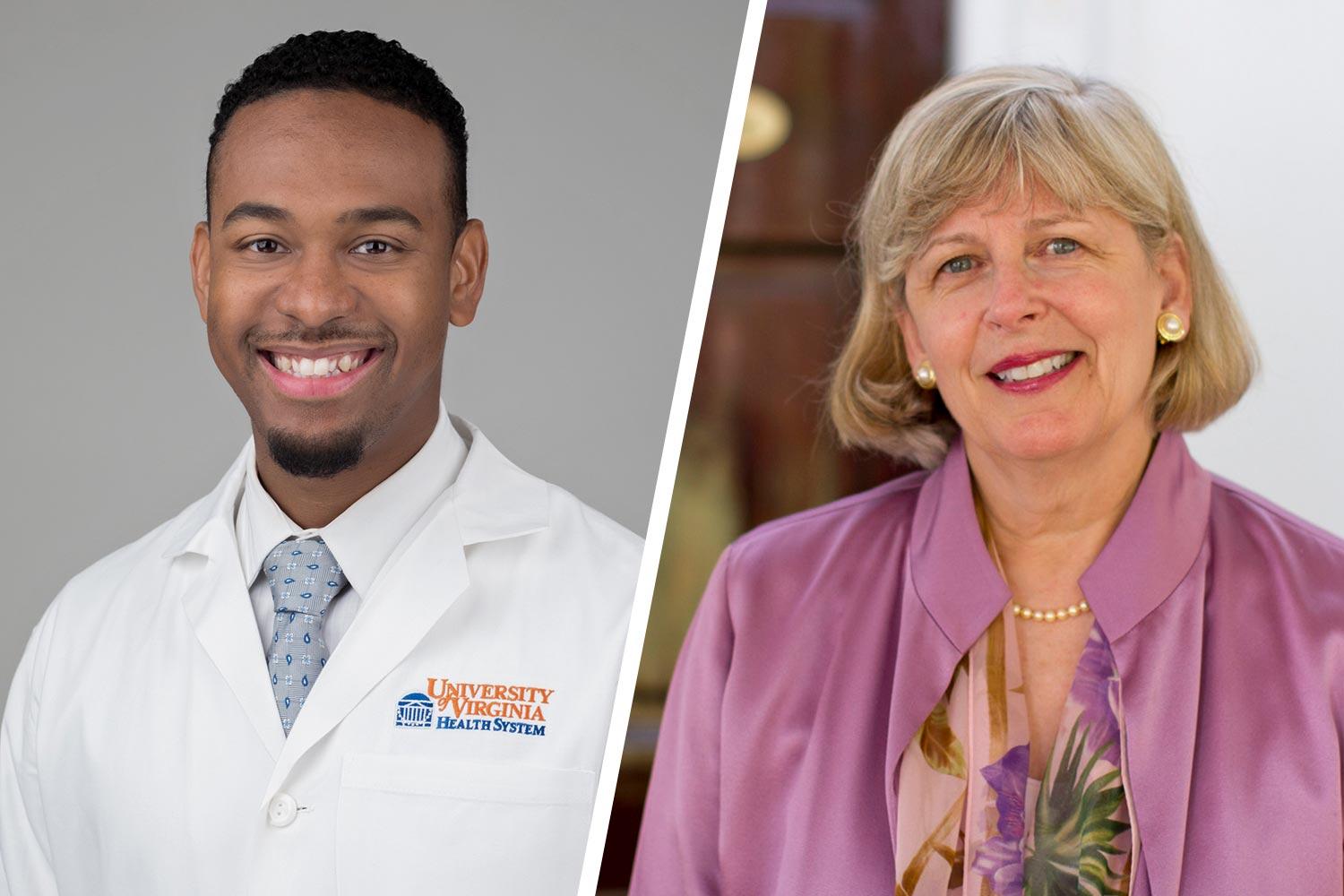 Dr. B. Cameron Webb, a physician and lawyer who was selected for the prestigious White House Fellowship Program, and beloved School of Nursing Dean Dorrie Fontaine are this year’s speakers for the University of Virginia’s 190th Finals Exercises.

On Saturday, May 18, Webb will address graduates from the College and Graduate Schools of Arts & Sciences, UVA’s largest school. The ceremony on Sunday, May 19, will feature Fontaine, who is stepping down this summer. She will speak to graduates from the University’s 10 remaining schools, plus UVA’s Data Science Institute.

Webb was selected for the yearlong White House Fellowship Program in 2016. The program, founded in 1964 by Lyndon B. Johnson, is one of America’s most prestigious appointments for leadership and public service, providing gifted and highly motivated young Americans with firsthand experience in the process of governing the nation.

Webb is a passionate champion for health equity and is committed to advocating for the needs of underserved and marginalized communities. He has served on several non-profit boards and is currently a member of the boards of directors of Doctors for America and of the Boys and Girls Club of Central Virginia.

A proud Wahoo, Webb received a B.A. in interdisciplinary studies as an Echols Scholar at UVA, then obtained his J.D. and health law certificate from Loyola University Chicago School of Law and his M.D. from Wake Forest School of Medicine. The National Minority Quality Forum recently named him to its “40 Under 40 Leaders in Health Awards” list.

Fontaine is the Sadie Heath Cabaniss Professor of Nursing and Dean of the School of Nursing since 2008. A critical care and trauma nurse for over 40 years, Fontaine came to UVA after a career in academic and clinical leadership at the University of Maryland at Baltimore, Georgetown University and most recently the University of California, San Francisco.

A focus on creating a healthy work environment including compassionate care, interprofessional education where nurses and physicians train together and creative efforts for inclusion and diversity are hallmarks of her 11-year tenure at UVA.

In 2009, Fontaine founded UVA’s Compassionate Care Initiative with a mission of alleviating human suffering through developing compassionate people and systems. The initiative nurtures students, faculty, staff and clinicians to become resilient and know that caring for themselves provides a foundation for the safe and exceptional care of others.

As a past president of the American Association of Critical Care Nurses, Fontaine is a champion of healthy work environments for clinicians and faculty and staff alike. In 2019 the nursing school received the first annual Healthy Work Environment award from Sigma Global, the National Nursing Honor Society for the dedicated work of staff and faculty who fostered an environment where all could flourish.

During Fontaine’s tenure, the School of Nursing has attracted $57 million through gifts and bequests with over $35 million in grants to advance nursing science and patient and community care.

Other academic firsts include new courses on mindfulness and leadership presence, a “Wisdom in Nursing” curriculum for undergraduates; and a palliative care concentration for graduate nursing students. Fontaine also led the school’s $6 million overhaul of McLeod Hall, which included the renovation of the school’s 10,000-square-foot Clinical Simulation Learning Center.

UVA has the only nursing school from Virginia ranked in the top 25 nursing schools according to the latest U.S. News and World Report ranking of over 500 schools. U.S. News also placed UVA’s Clinical Nurse Leader program – which has doubled in enrollment under Fontaine’s tenure – No. 2 in the nation. More than 1,300 high school seniors applied for 68 spots in the school’s incoming undergraduate class.

Fontaine and her husband, Barry, a New Orleans native, are longtime residents of Pavilion IX. They have kept their doors open, hosting hundreds of events, courses, lectures and celebratory gatherings for students, faculty and staff. They famously held regular jambalaya dinners for Lawn residents after the annual Trick-or-Treating on the Lawn event.