Class of 2019: ‘If You Know Someone Needs Help and You Can Help, You Have to Help’ 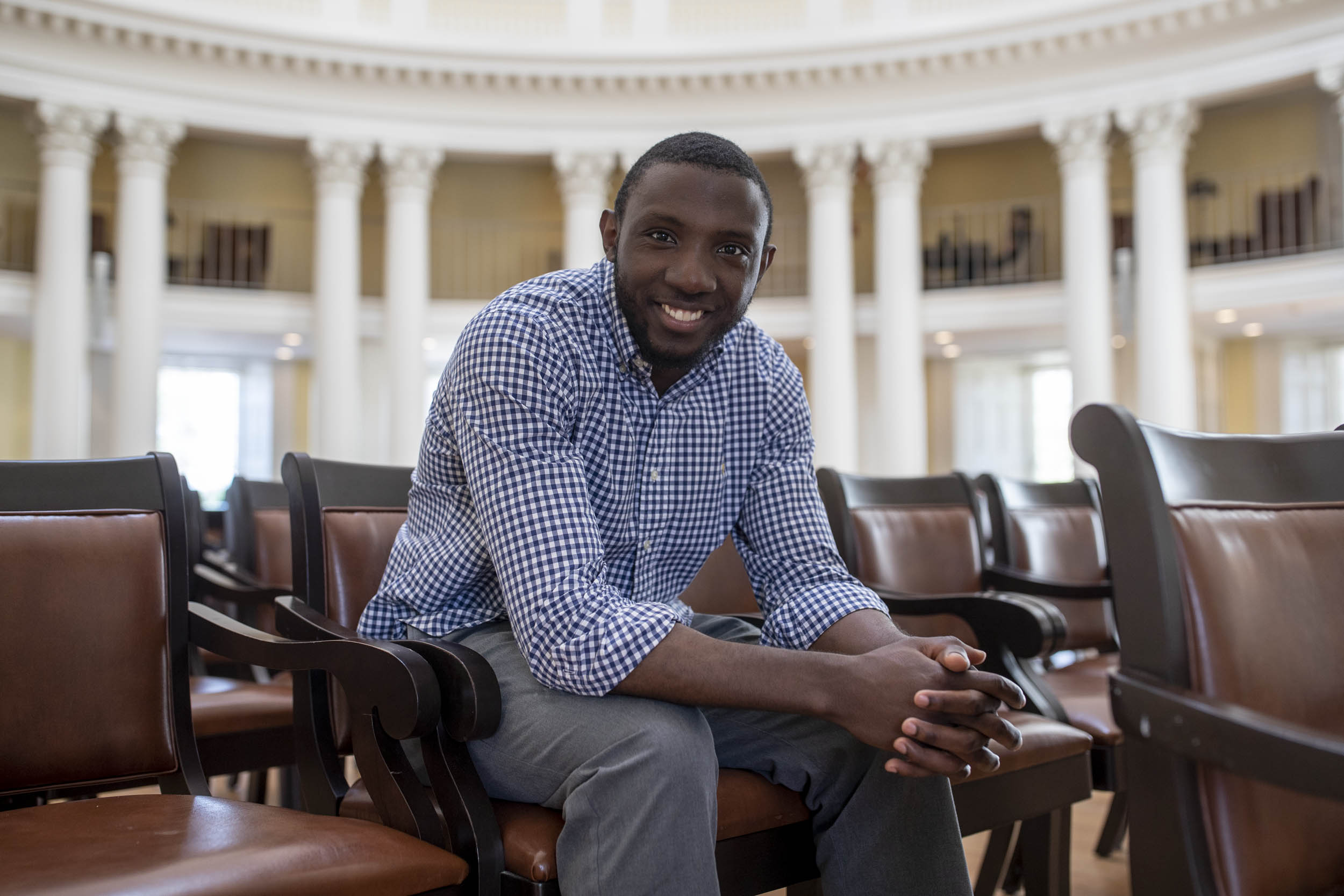 In the Douala, Cameroon neighborhood where University of Virginia medical student Franck Azobou Tonleu grew up, families were so close with one another that it sometimes felt like everybody was living under the same roof.

If a family member was sick, someone from another family was always ready to help out.

If you wanted to play soccer, you could easily jump right into a pick-up game.

Of course, if you had something private to tell somebody, you better keep your voice down.

And, if your report card came, well, neighbors sometimes knew your grades before you did.

“It was impossible to live in the neighborhood and not know everybody,” Azobou Tonleu said. “You had like several sets of parents basically.”

That’s what made Azobou Tonleu’s initial transition to the United States so tough.

Well, that and the weather. When Azobou Tonleu arrived in Baltimore in the winter of 2008 from Douala – a city with an average daily temperature of 80 degrees – it was snowing.

“It was bad,” recalled a smiling Azobou Tonleu, who had never seen snow before. “I didn’t think I was going to make it.

“It was exciting to see what a new experience was going to be like, but it was a difficult assimilation because everything was new and everything you had known you had left behind. Everything was new – language, weather, culture. There were times in the beginning when I almost regretted coming here, because things were so hard.”

Azobou Tonleu’s mother had moved to Baltimore five years earlier in search of a better life for the family, leaving Azobou Tonleu and his siblings to be raised by their grandmother.

“We did OK,” said Azobou Tonleu, who also had an older brother to lean on, “but it was hard to go home and, say, not be able to show your report card to your mom.”

“I definitely would like to be involved in global health – maybe Cameroon or maybe somewhere else,” he said. “It’s kind of wherever life takes me.”

Azobou Tonleu was in the 10th grade when he and his siblings reunited with their mother in Baltimore, and he continued to excel in the classroom. Eventually, he earned admittance to the University of North Carolina and, subsequently, UVA’s School of Medicine.

According to Meg Keeley, the school’s assistant dean for student affairs, Azobou Tonleu’s commitment to service stands out. It’s a commitment that he traces to his upbringing in Douala.

“For me, it’s like if you know someone needs help and that you can help,” Azobou Tonleu said, “you have to help.”

A glance at Azobou Tonleu’s list of extracurricular activities makes you wonder how he had any time to get through med school.

The Adult Learning Center in Charlottesville was one Azobou Tonleu’s first involvements. For three hours every week, he spent time with refugees, helping them with their English.

Since then, he has served as community outreach co-chair of the Student National Medical Association; an instructor in the MiniMed School program, in which he introduced medical topics to community members; and helped run this year’s Charlottesville Health Fair.

Perhaps most impressive was a new program he created, “Discover Medicine,” that welcomed high school students to visit the School of Medicine and the UVA Health System once a month for an entire school year, learning about various areas of medicine and shadowing doctors.

The idea came to Azobou Tonleu after he noticed students were coming in once a year as part of the previous program, only to never be seen or heard from again.

Azobou Tonleu said the program has been a big success.

“The kids have loved it,” he said. “Most of them have never stepped into a medical setting before. They’ve learned a lot, and it’s been really rewarding for us in that we can make a difference in their lives.”

Ironically, when Azobou Tonleu first got to medical school, he wasn’t planning on volunteering much. He had heard plenty of stories about how busy he would be.

However, a few weeks into his first year, Azobou Tonleu realized a piece of him was missing.

“I think that’s why service was such a big part of my medical school career. Service drove my choice of medicine. I feel like a lot of time it’s the other way around, where people want to become doctors for so long and then they figure out they could do a lot of good through medicine. So I guess, in a way, medicine is almost a means as opposed to an end because it allows me to do that stuff, just while enjoying what I do.”

While at UVA, Azobou Tonleu – who won the Health System’s Martin Luther King Jr. Award for service – said a number of the minority physician-instructors recruited by School of Medicine Dean David S. Wilkes had a huge impact on him.

“There’s something about when you have a person who looks like you in front of you – it’s almost like a goal where you’re like, ‘OK, he’s done it, maybe I can do it as well,’” Azobou Tonleu said. “He brought in some really great people. Having people like that, I never realized how impactful it could be.”

On Sunday, Azobou Tonleu will walk the Lawn, then head to Emory University in Atlanta for his residency in internal medicine, with the hope of doing a fellowship in cardiology. He said he chose cardiology because heart problems affect such a large amount of people and he knew he could make a big impact.

“He is highly intelligent, motivated, hard-working and dedicated,” Keeley said. “I predict that he will make major contributions during his career in medicine.”

“I definitely would like to be involved in global health – maybe Cameroon or maybe somewhere else,” he said. “It’s kind of wherever life takes me.”

What’s the True Story of Brooks Hall? This Architectural Historian Has the Answer END_OF_DOCUMENT_TOKEN_TO_BE_REPLACED

At UVA, There Is a Club for Everyone END_OF_DOCUMENT_TOKEN_TO_BE_REPLACED