Class of 2019: Paul Ready to Tackle Life After Football 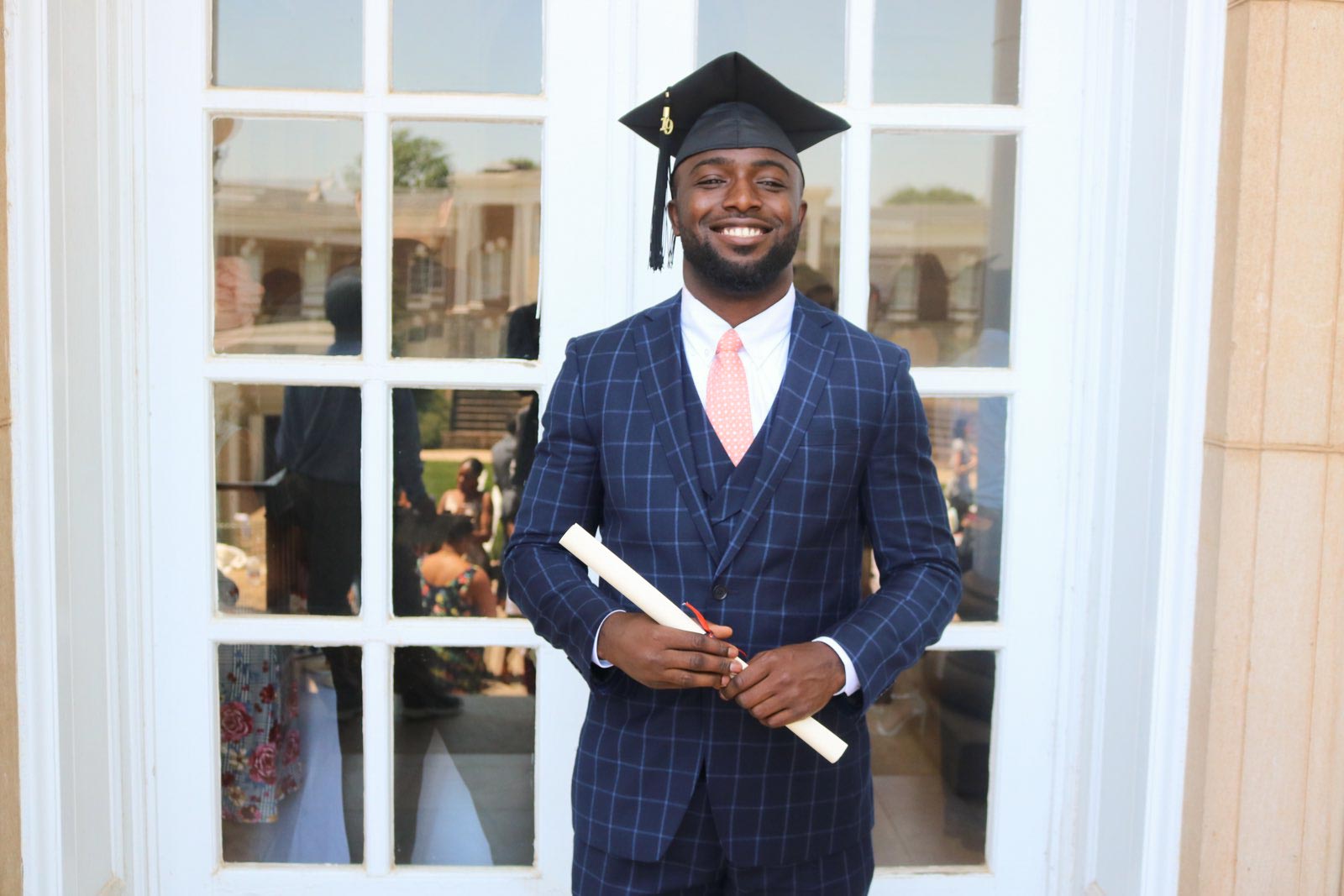 Gladimir Paul will be moving to Philadelphia, his hometown, for the School District of Philadelphia’s teacher residency program. (Contributed photo)

In his native Philadelphia, Gladimir Paul starred in football at Northeast High School, and he expected to experience similar success at the University of Virginia.

It didn’t happen. Paul, who redshirted at UVA in 2015, appeared in three games over the next three seasons, all of them in 2016.

“Coming out of high school, you’re like the greatest in your city, and you have really high hopes and goals,” Paul said recently. “From the very start, my goal was to come here and play and dominate. It just didn’t work out that way. I was hit with the reality.”

The Cavaliers’ head coach when Paul joined the program was Mike London, whose preferred defense was a 4-3 – four defensive lineman and three linebackers. When Bronco Mendenhall took over after the 2015 season, he installed a 3-4 scheme (three linemen and four linebackers) in which Paul, an outside linebacker, wasn’t a natural fit.

Even so, said co-defensive coordinator Kelly Poppinga, Paul earned the respect of his teammates and coaches.

“Glad was a guy that just came to work every day and put forth good effort,” Poppinga said. “Eventually he had to accept his role as a scout-team player, but he never complained about it, and he showed up and worked really hard to try to improve his situation and try to gain a bigger role  It’s probably not exactly what he was hoping for in his college experience, but he’s the type of person character-wise that we would be looking for, and I think that’s why he fit in with us really well, because he’s such a high-character kid.”

Paul considered transferring to another school, but he recognized the value of a UVA education. Moreover, he never let football define him.

The percentage of college players who reach the NFL is extraordinarily low, and the average career of those who make it lasts only a few years. Poppinga, a former Brigham Young University standout, played one season in the NFL.

“And so being prepared for life after football becomes that much more important,” said Poppinga, who oversees UVA’s outside linebackers. “That’s just something we’ve always emphasized as a program, and that’s where that word ‘and’ that we use in our program comes in. You can’t just be a football player. You have to have more than just that, and that’s where the University of Virginia brings such a great opportunity to receive a degree that can help them after football.”

An African American and African studies major, Paul received that degree Saturday during a graduation weekend in which he took part in four ceremonies.

Two of them took place Friday. The first one, at John Paul Jones Arena, honored Virginia’s graduating student-athletes. The second, at Old Cabell Hall, was the annual Donning of the Kente in which graduating students with roots in Africa are recognized.

On Saturday, Paul walked the Lawn with other graduates of the College of Arts & Sciences, and he later went through a diploma ceremony at Minor Hall with others in his major.

“I was probably running on about two hours sleep, so afterward I was exhausted, but it was worth it,” Paul said.

A fifth year was not an option for him in Mendenhall’s program, but Paul could have played for another college team as a graduate transfer this fall. Instead, he decided to embark on a new challenge.

In August, Paul will enter the School District of Philadelphia’s teacher residency program. In this program, each resident works alongside a mentor teacher, usually in a high-needs classroom, for an academic year while also taking college courses.

“So it’s very hands-on and practical,” said Paul, who plans to pursue a master’s degree in the program.

At the end of the academic year, during which they’re paid, residents receive their teaching certificates. The new teachers commit to work in the Philadelphia school system for three years, said Paul, who wants to teach English and language arts at the middle school level.

The perspective he’s gained at UVA, Paul said, “kind of motivated me to just want to teach. I want to give students the same eye-opening experience that I was able to get when I chose African American studies.”

In his second year at UVA, he took a course taught by Lisa Shutt, who later became his academic adviser in the African American and African studies department. She saw how education classes he took piqued his interested in teaching.

“I am far from surprised that Gladimir has decided to teach, particularly at home in Philadelphia,” Shutt wrote in an email. “It seems a completely natural fit. It has long been my impression that Gladimir’s home and family are absolutely central to his sense of purpose and to his understanding of his place in the world.”

As Paul began exploring teaching as a profession, Shutt wrote, he “started making connections between the observations he was making during his field experience in Charlottesville schools and the skills and knowledge he was starting to build in his study of African American and African studies: critical thinking and the ability to quickly digest and reproduce complex ideas, the ability to work with people from diverse backgrounds and see problems from a number of different perspectives, and the ability to conduct research and analyze different kinds of data, among many others, and he used his strong writing and public presentation skills to process the connections he was identifying.”

Football required a significant time commitment from Paul, who lived during the 2018-19 academic year with teammates Richard Burney, Rob Snyder and Dominic Sheppard. Still, Shutt wrote, Paul “was extremely dedicated to his work in the classroom, particularly as he realized more and more how his studies in AAS strengthened and helped him focus his resolve to effect positive social change in his home community.”

At UVA, Paul took two classes taught by Otu, who’s from Ghana. The first was "Introduction to African American and African Studies and the second was "Revolutionary Struggles in the African Atlantic."

Like Shutt, Otu was impressed by seriousness with which Paul approached his studies.

“He wanted people to get to see him as a very multi-faceted person, to see him as more than just an athlete,” Otu said. “He saw it as his calling, if you will, to really invest in education and take his studies seriously and become the kind of intellectual he wanted to become.”

“He [touched] on many concepts of the class to show how it could be very difficult for athletes like him to manage,” Otu said. “He was very sensitive to the benefits the University has to offer, but also the ways he must as a student navigate UVA as an athlete who also wanted to be seen and affirmed as an intellectual.”

Education, Paul said, has always been important in his family. He has five siblings, four of whom attended Pennsylvania State University and the other Delaware State University. At UVA, he volunteered in Charlottesville-area schools as part of the Athletes Committed to Education program.

His college football career officially ended in late December in Charlotte, North Carolina, where Virginia defeated South Carolina, 28-0, in the Belk Bowl. For the first time since enrolling at UVA, Paul didn’t spend the spring preparing for the coming season, but the adjustment wasn’t difficult for him.

“It wasn’t weird at all,” he said. “It was actually very relaxing, because I’ve been playing football in school for a long time.”

Paul, who plays bass guitar at the Charlottesville Vineyard Church, stayed busy this spring. He held a part-time job at a local restaurant, and in March he went to Belize on a mission trip sponsored by Filter of Hope and Athletes in Action/Fellowship of Christian Athletes. His group volunteered in poor communities where families had little to no access to clean water.

When the spring semester began, Paul hadn’t settled on a post-graduation plan. But he was ready to tackle life after football, and he’s excited about the career path he’s decided to follow.

“I knew whatever I was going to do was going to be related to teaching, but I just wasn’t sure through what program,” he said. “So I was just researching, and I just happened to land upon [the program in Philadelphia]. And as I learned about it, I was like, ‘This is a great program and a great opportunity.’”

What’s the True Story of Brooks Hall? This Architectural Historian Has the Answer END_OF_DOCUMENT_TOKEN_TO_BE_REPLACED

At UVA, There Is a Club for Everyone END_OF_DOCUMENT_TOKEN_TO_BE_REPLACED