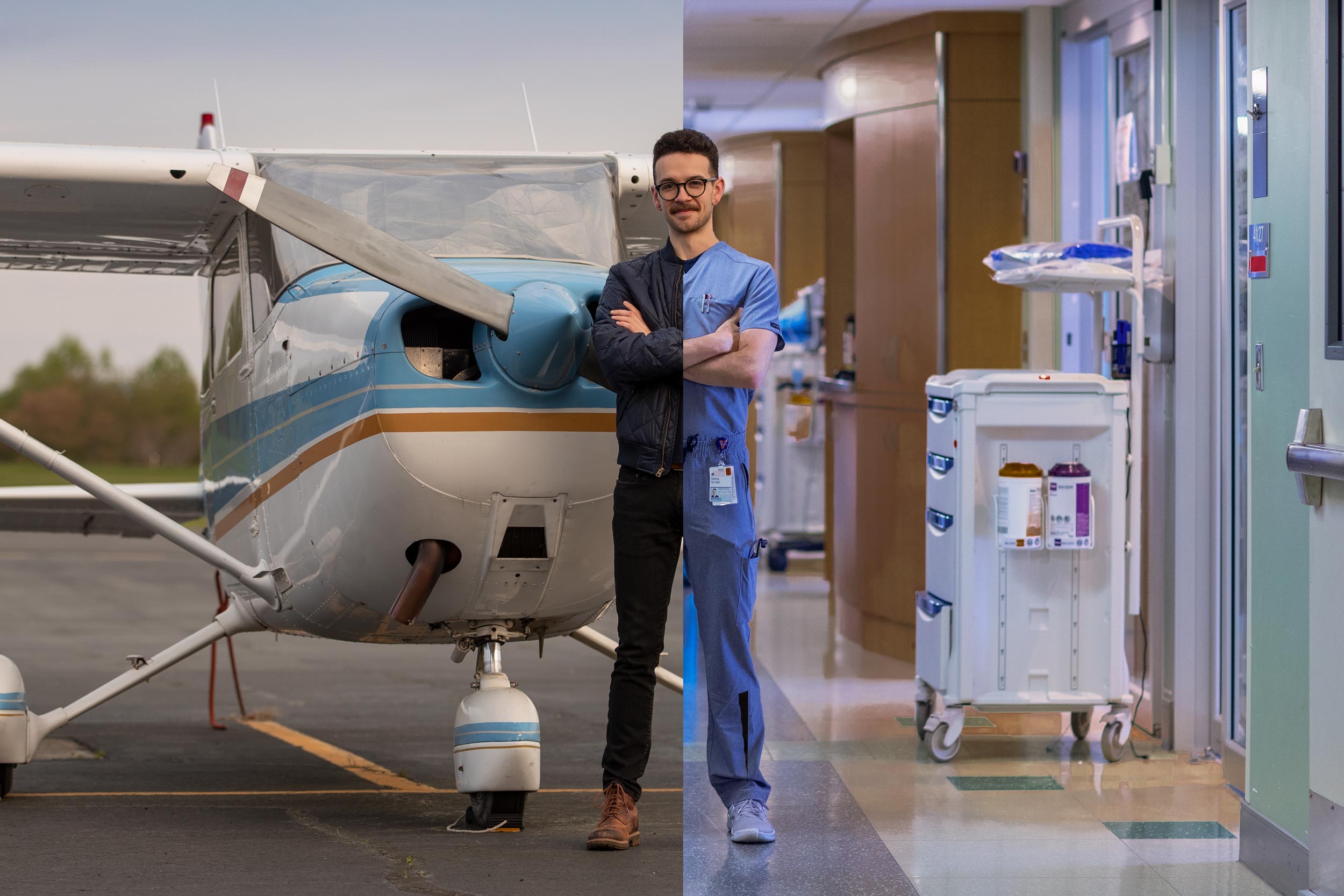 Though Sidney St. Clair found in nursing a career that satisfied his passion for hard science and his love of human connections, he still finds to time to fly as an escape. (Photo by Sanjay Suchak, University Communications)

There’s both gravity and grace in Sidney St. Clair’s voice as he talks about the lives he’s lived.

As a wannabe weatherman. As a Midwestern radio personality. As a recreational pilot who toggles between right-side-up jaunts in a small, single-engine plane and the daring swoops, loops and rolls of a stuntman.

While the variety of his experiences belies his age (he’s just 24), as the Bland native prepares to graduate from the University of Virginia for a second time, he calls himself lucky to have found his ultimate calling: nursing.

In many respects, the process of becoming a nurse brought St. Clair full circle, back to one of the most difficult periods of his life. It was 2011 when his father, Todd Webber St. Clair – a talented rock musician and lead singer in a variety of Virginia bands, including Shot Tower, Fast Passion, Catch 22, Loud Clangin’ and Bangin’ and Gasoline Alley – died of an inoperable brain tumor at the age of 47. Sidney, then a high school senior, was just 17.

Of course, the experience left an indelible mark on the young St. Clair, whose family made the nearly 200-mile journey numerous times from their Southwest Virginia home to UVA Medical Center, where Todd received radiation treatments and care. Though the memory is dark, St. Clair recalls the nurses as points of light.

“I call it the ‘chair pulling,’” St. Clair said. “The nurses would pull up a chair, sit down, ask me about things I was interested in, how my family was, how things were, and that was really important for me to have someone who not only seemed as if they were giving me the time, but really were noticing me, and noting that illness isn’t just something that affects the person who experiences it, but extends to the family as well. In my nursing, I know that’s just as important as my ability to put in an IV line.”

After graduating from high school in 2012, St. Clair spent a year enrolled in the University of North Dakota’s atmospheric sciences program in Grand Forks (“the coldest city in the U.S.,” he quipped), learned to fly, and interned at pop hit radio station KZGF Z94.7, earning a spot on its popular morning show as “Sid the Kid.”

Despite his success, St. Clair felt dissatisfied with the Midwest, returning to Virginia the following year. He garnered entry to UVA, graduated in 2016 with degrees in biology and Arabic, and contemplated a career in medicine.

““[Flying is] probably the best self-care I think I have, the best way I escape everything – physically and metaphorically. It’s freeing. It’s exhilarating. In the air I think, ‘I’m a human being, and human beings built these airplanes, and I feel really alive right now.’””

But after a stint as a volunteer in a Ryan White HIV Clinic and a job with nursing professor Kathryn Laughon, who studies intimate partner violence, St. Clair finally lit on nursing, something that satisfied his passion for hard science and his love of human connections. UVA’s Clinical Nurse Leader program – Virginia’s first fast-track to nursing master’s degree program for individuals from outside the profession, currently ranked No. 2 in the nation by U.S. News & World Report magazine – proved the perfect vehicle.

Though the two-year program proved something of a whirlwind, nursing “is a very different phenomenon than weather,” St. Clair said. “And it excites me to apply important notions about cell biology, and apply it in a professional way, where I get to build this puzzle. It’s very new and refreshing – and very human-centered.”

To St. Clair’s professors, he’s a standout, even among a talented crowd.

“His intellectual curiosity, his emotional intelligence, and the way he connected with patients was really striking,” recalled assistant clinical professor Michael Swanberg, who taught St. Clair during his obstetrics rotation. “He seems to have that perfect combination of left brain, right brain, together.”

His nursing education was equally varied. St. Clair has helped deliver babies, researched nursing interventions to fight cervical cancer with assistant professor Emma Mitchell, even studied and overhauled the signage related to protective garb requirements in the ICU to help prevent the spread of infections like Clostridium difficile for his capstone project.

On free mornings or weekends when he wasn’t working or studying, he’d still find time to sneak away to the Charlottesville Flight Center for a two-hour trip, or take to the skies with his aerobatic flight instructor, departing from the Orange County Airport.

“It’s probably the best self-care I think I have, the best way I escape everything – physically and metaphorically,” St. Clair said. “It’s freeing. It’s exhilarating. In the air, I think, ‘I feel really alive right now.’”

He’s also discovered that Charlottesville – a “scary” place he initially equated with his father’s illness – is ultimately where he wants to stay. Having secured his first nursing job in the UVA Medical Center’s Thoracic Cardiovascular Intensive Care Unit, and bought his first house (a fixer-upper at the wood’s edge that recalls his family’s 16-acre home in Southwest Virginia), St. Clair says he’s “digging in” – and finding peace.

“I often think about my father,” he said. “But this is the space that I’m supposed to be in, and I think I can use that experience in my nursing, and use it for good. [My father’s death] doesn’t have to be this wildly debilitating life experience.”

It’s not the only full circle he’s experienced. Just last week, when St. Clair was asked to allow a UVA undergraduate considering nursing to shadow him in the ICU, he felt the metaphoric swoop of an airplane stunt – a “complete 180.”

“It’s crazy,” he laughed. “I’m not really a spiritual dude, but it’s wild, this full circle, to talk to this young man who, as a third-year, is just like me.

“I love that these opportunities just don’t end.”