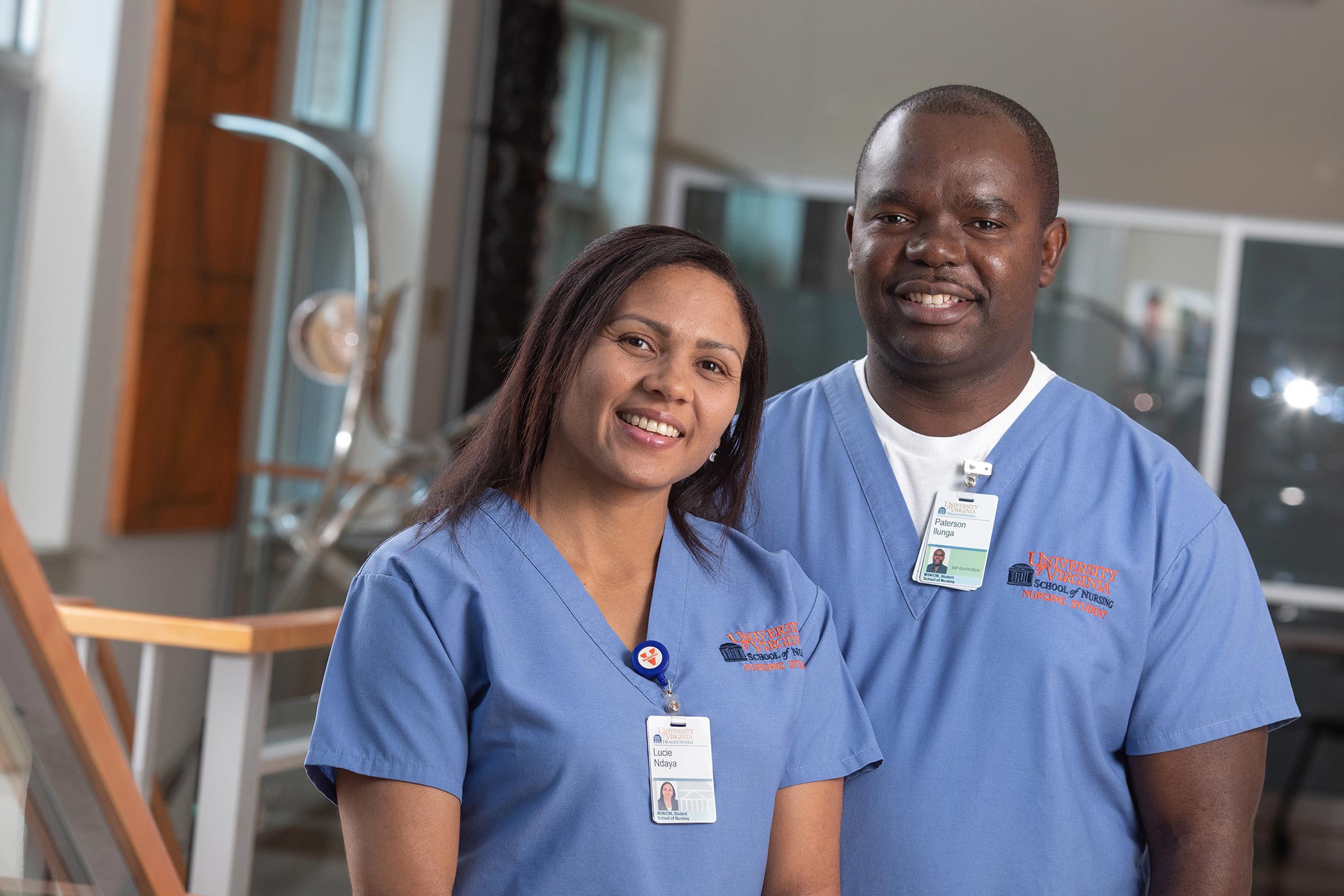 Lucie Ndaya and Paterson Ilunga spend a lot of time together.

Native to the Democratic Republic of Congo, the couple graduated from University of Lubumbashi together in 2005, becoming doctors, and, as physicians working in neighboring Zambia, did rounds in the hospital together, shared on-call responsibilities most nights and weekends, and even learned English and the local dialect, Bemba, concurrently.

As nursing students in the Clinical Nurse Leader master’s program at UVA – in which they both enrolled in 2018 after emigrating to the U.S. through its Diversity Immigrant Visa program – they also grew to appreciate the role American nurses play. Now, as they earn master’s degrees in front of their children, ages 8, 13 and 14, it’s a fitting moment for a couple that’s built bridges across the arc of their lives together and then, hand in hand, crossed them together.

“Doing things together has been a good experience for us,” said Ilunga, simply.

As physicians trained in general medicine in Africa, they treated patients with malaria, tuberculosis, HIV, AIDS and other infectious diseases; delivered dozens of babies; and tended to those with malnutrition, chronic conditions, and individuals in need of emergency help. As senior medical officers in Zambia, first at Ndola Central Hospital and, later, Kamuchanga District Hospital, between 2006 and 2011, they did it all.

Eventually, the exhaustive nature of their work and the need for more knowledge and efficiency led them to seek more education and a specialty.

“We were trying to give our best,” recalled Ilunga, “to give the kind of medical services that we ourselves would want. But when you’re an obstetrician, a surgeon and everything else, you need more education. You cannot be everything. For us, [America] was a place to get an education and a chance to specialize.” 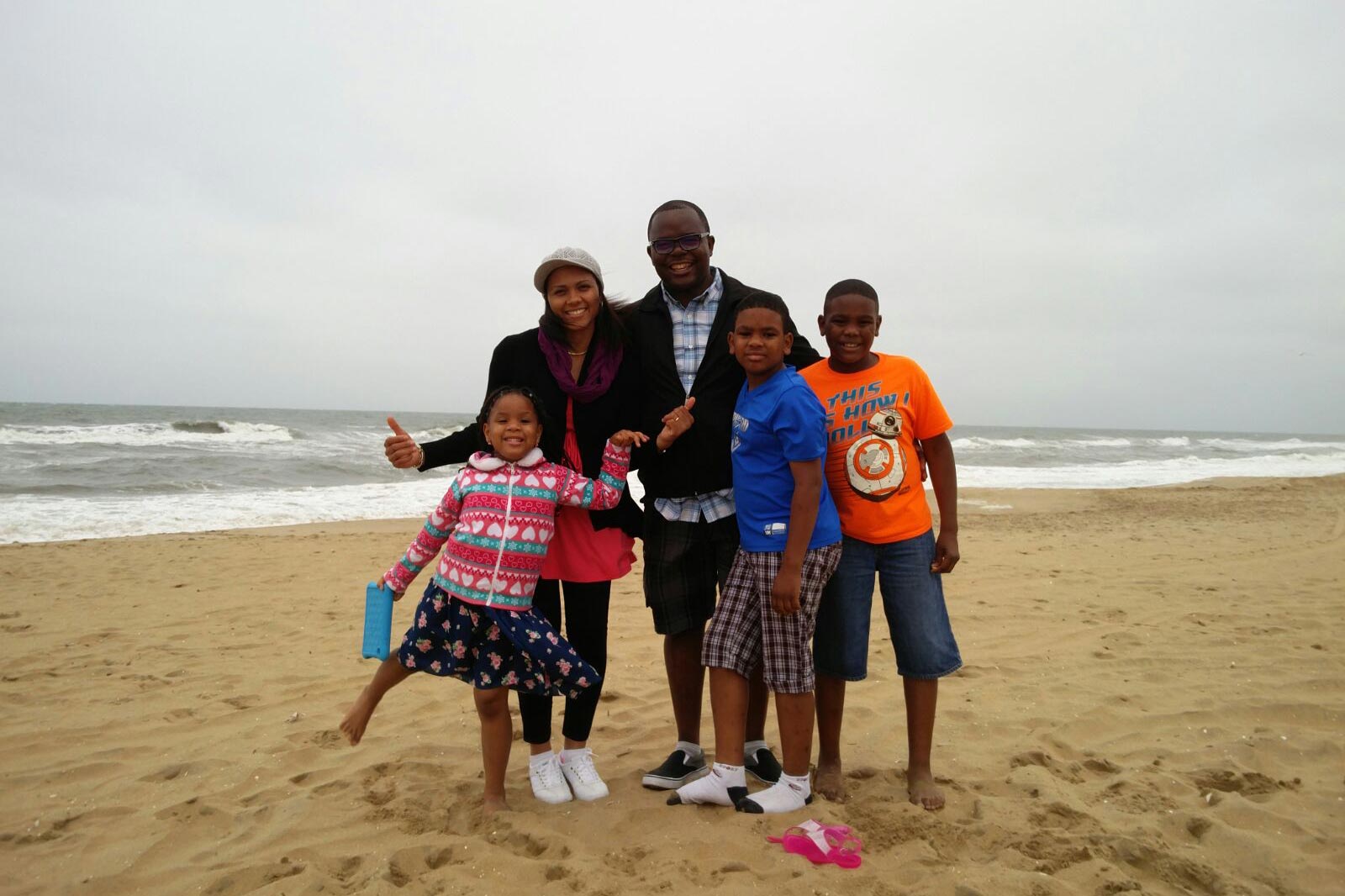 In 2011 they arrived in Tennessee to set up their new life, their two young children in tow, and found work as translators. Though they’d initially planned to apply to medical school, their plans changed after a scare with Ndaya’s third pregnancy brought them into contact with a nurse practitioner, who diagnosed a choriocarcinoma, a cancerous growth on the placenta.

It was, they shared, a revelation.

“Even though experienced nurses in Africa can teach and advise medical students and novice physicians in certain areas of patient’s care, their role is limited in many ways,” said Ilunga, whose third daughter, now 8, was born healthy and without the deadly carcinoma predicted by the ultrasounds. “But here? Things are different. That experience changed our perception and our trajectory of what we wanted to do. We thought, ‘Why not go into this? What advanced nurse practitioners do here is in many ways what we were doing in Africa.’”

The couple – who’d heard of UVA’s Clinical Nurse Leader program, which offers those with degrees in other fields a fast-track approach that prepares them to be nurses in two years – applied, garnered Conway Scholarships, and arrived in Charlottesville in 2018, commuting from their home in Harrisonburg, and never looked back.

“With our different background, adjusting into a new culture here hasn’t been easy. But we are glad to have found a sense of belonging here and feel appreciated. We don’t take anything for granted. The School of Nursing has been a place where we’ve found amazing faculty and fellow students who were very much supportive and made easier our journey. We are so grateful for them.”

Nursing provided a new challenge, they said, and they found the program both difficult and easy. Technology proved a steep learning curve; even typing quickly on a computer was a new skill, given that African record-keeping was often done on paper. Navigating American English (one of five languages the couple now speaks) also proved a challenge, given the highly technical information they were learning.

“Writing was often a challenge,” laughed Ilunga, who became a U.S. citizen in 2017. “You have, for example, a 10-page paper. For most of my peers, it’d take half the time it takes me because I want to choose each and every word very carefully, and often I’m translating in my head from French what I want to say in English.”

Even taking tests for their nursing classes initially posed a challenge because “you think a different way as a physician than you do as a nurse,” explained Ilunga. But just as they’d done before, they adjusted, earning between them over six semesters, 75 credits, and 24 courses just three B’s, and the rest A’s – a result of a work ethic that CNL program director Emily Drake termed “driven, hard-working and gently tenacious.”

But there was much about nursing that proved familiar. To Ndaya, who became a U.S. citizen in 2018, it was even preferable.

“I feel fulfilled, when I’m delivering care at the bedside,” she explained. “A nurse has a unique opportunity to connect with patients and deliver care with a holistic approach. Providing compassionate care with empathy, as a valued member of the health care team – that’s what drives my willingness to serve as a nurse and hopefully as an advanced practice nurse.”

Now, as they study for the nursing board exam and consider job offers, they’re reflective of how they’ve changed during their time in the U.S., their time learning to be nurses – as well as the many ways they’ve stayed the same and found a community.

“I think, ultimately, you live the life you want,” said Ilunga, “and we’ve always wanted to be in health care, where we have opportunities to serve and help with our skills. When I look back, I feel happy because the decisions we’ve made and opportunities we’ve had make us able to do the things we want to do.”