Class of 2021: From a Life Abroad, Student Brought a Unique Perspective to Grounds 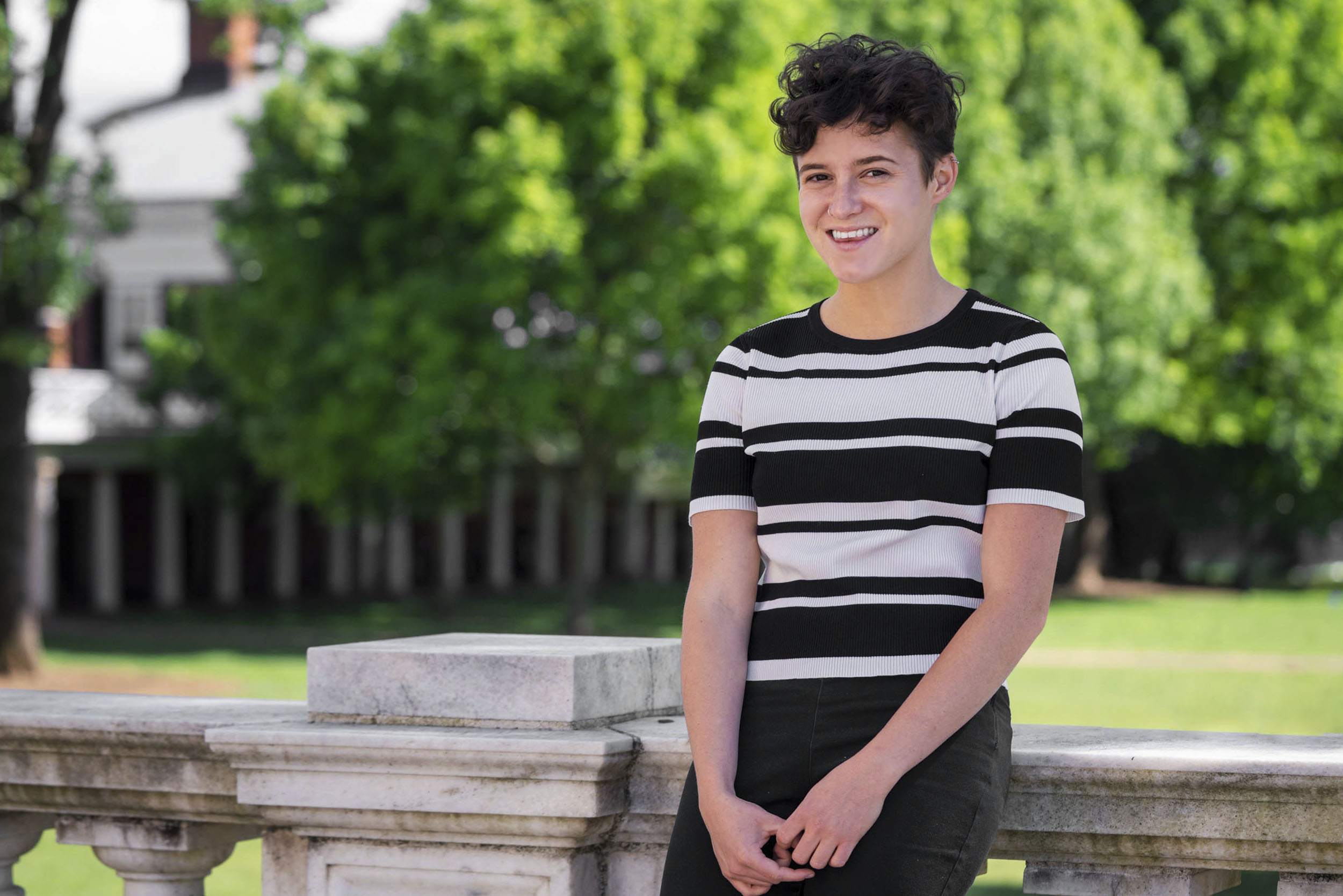 “I really just love learning for the sake of learning,” said Zoe Larmey, who just completed a double major in political and social thought and in studio art. (Photo by Sanjay Suchak, University Communications)

Zoe Larmey’s globetrotting path to the University of Virginia began in Dar es Salaam, Tanzania, where she grew up as her parents led Young Life’s efforts there. After being accepted to UVA in 2016, she delayed her arrival for a gap year spent working as an au pair in France to improve her French, and then as a housekeeper and volunteer translator for a Mercy Ships hospital vessel offering medical care off the coast of Benin for some of Africa’s poorest populations.

The ripple effects from those experiences prodded the graduating UVA student to continue seeking international connections and opportunities for service over the course of her four years in Charlottesville. Larmey volunteered with the local International Rescue Committee, using her French and Swahili language skills to help refugee clients from the Democratic Republic of Congo and other countries settle in the area. Through a summer fellowship with the Religion, Race and Democracy Lab, a research project associated with UVA’s Democracy Initiative, she also reported and produced a podcast episode on the Ebola crisis in Liberia.

Now, after completing a double major in political and social thought and in studio art, with a focus in cinematography, Larmey plans to return to Tanzania before mapping out her next big step.

“I haven’t been back since I started college, and I have the privilege to embrace a bit of uncertainty right now and give back,” Larmey said. “I want to see how much I’ve changed when I get back within the context that I used to be in before deciding where I want to continue.”

That open-ended curiosity and enthusiasm for exploring the unfamiliar, along with the perspective she brought from growing up outside the United States, distinguished Larmey both in the classroom and outside the confines of the University community.

Professor Michael Joseph Smith, director of the Political and Social Thought program in UVA’s College and Graduate School of Arts & Sciences, said he first met Larmey several years ago before she started the major, as she was preparing for a spring break trip to Cuba. 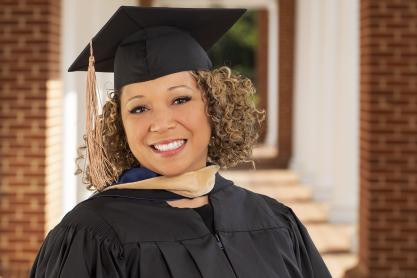 “I could see right away she had an adventurous and interesting spirit,” said Smith, Thomas C. Sorensen Professor of Political and Social Thought. “PST is a fairly intense interdisciplinary major, and I think Zoe’s classmates appreciated her unusual perspective on things and her lovely sense of humor. She raised questions that many of our students who haven’t had quite as varied a background as she has would not have thought of. She brings a kind of sophisticated cosmopolitanism, and that may sound ‘hoity toity,’ but she combines an awareness of the range of human experience with just a very light touch of humor that shows she doesn’t take herself too seriously.”

In her first two years on Grounds, Larmey took a wide variety of classes to explore subjects that weren’t offered in her school in Tanzania.

“One of my friends looked at one of my early schedules and joked, ‘This looks like an art piece. There’s no logic to what you chose,’” Larmey said. “But I really just love learning for the sake of learning, and both of the majors I chose helped me explore the interdisciplinary connections between so many topics I’m interested in, while allowing me to ask questions about the political and social dynamics underlying them.”

In her studio art major, Larmey quickly gravitated to filmmaking, studying and working with professor Kevin Everson, an internationally acclaimed filmmaker whose honors and recognitions include a 2019 Heinz Award in the Arts & Humanities. Larmey worked with Everson and history professor Claudrena Harold, along with many other students, on their long-running project, “Black Fire,” which documents the history of African American students at UVA and the pursuit of social justice and racial equality on Grounds.

Like Smith, Everson believes that Larmey’s unique life experiences have provided her with a refreshing perspective on American culture.

“Her framing of everything is completely different than that of many of her classmates here who grew up in the United States,” Everson said. “She has a good eye, also, as a filmmaker and photographer. Just the way she frames up stuff, and the way she writes on various subject matters in a very humane way. Her sensitivity to humanity, as conveyed to the viewer, is exciting.”

Larmey said she has enjoyed the collaborative aspect of working on a variety of short film projects with classmates and with Everson as her mentor.

“I really like the idea of creating art that deals with time and involves work with other people that I could never do by myself. You always have to be coordinating a team and asking for help. I also love writing, so being able to attach storytelling and all those different components in moments that are perishable and not permanent, that’s really interesting and exciting for me.”

For her political and social thought thesis, Larmey examined iconic images of violence, suffering and protest. Working with thesis adviser Mona Kasra, an assistant professor of digital media design in the College’s Department of Drama, Larmey assessed the power, impact and ethical problems of documenting the trauma and violence of human suffering.

“Her thesis topic is undoubtedly an important-but-challenging one,” Kasra said. “Zoe is an exceptional thinker and writer; she writes eloquently and conveys her ideas in a very clear way. She’s a curious, committed and passionate researcher, and I was continuously impressed by the energy, drive and thoroughness she put into her work.”

The final chapter of Larmey’s thesis discusses Neda Agha-Soltan, the young woman whose 2009 death grew into a symbol of anti-government protests in Iran, as well as the killing of George Floyd in Minneapolis last year and other deaths of Black Americans that Larmey said are not only symbols of protest, but evidence toward accountability.

“The thesis is based on the intersections of a lot of the things I’m interested in related to the fields of humanitarian aid and our response to crises,” she said. “It goes back to my time working on the Mercy Ships and the efforts to fund-raise for their important mission. Is it OK that we’re looking at pictures of people suffering? How is this helping?

“It’s part of the tradition of how we communicate about disasters, whether it’s protests against state violence or whether it’s humanitarian disasters and famines. … The readings on this subject are so vast, and there are so many photos to study, but I really am interested in the ways that protesters have commandeered the narratives of suffering from hegemonic powers, from the government, from white audiences and Western audiences, to make a difference.”

Larmey’s interests in exploring the unfamiliar and embedding herself in different communities extended to where she chose to live as a UVA student. For the last three years, she was among a small group of undergraduate students who have chosen to live together off Grounds in the Perkins House, within Charlottesville’s historic 10th & Page neighborhood. The intentional living community seeks to live and work with families in the area. The house is named after John and Vera Mae Perkins, who ministered to the poor and their communities in Mississippi during the civil rights era and after.

Larmey and many of the other graduates of UVA’s Class of 2021 arrived in Charlottesville in the summer of 2017, when white supremacists provoked violent clashes during the “Unite the Right” rallies of Aug. 11-12 of that year. The traumas and racial tensions of that weekend, including the death of Heather Heyer, a young woman killed by a driver ramming his car through a crowd of counterprotesters, influenced Larmey’s studies of injustice and racism. However, she said her interest in living within a diverse neighborhood of families with deep roots in the community predated that.

“I spent my whole childhood as a visitor in Tanzania, and now I’m a visitor in Charlottesville. I’m interested in learning how to live well in spaces that belong to someone else,” she said. “At the Perkins House, we try to live outside the ‘UVA bubble’ a little bit and meet with neighbors and take some time away from our student lives to be present, and to learn the stories of the people in the town and the ways that the University has impacted them and the ways that they have been making their own histories in these neighborhoods. It’s inspired by the idea that as students we should learn how to live in the larger community.”

The goal isn’t necessarily to launch service projects or to seek to “improve” the neighborhood in any way, Larmey said. Rather, the residents of the Perkins House aim to tread lightly as they build relationships.

“It’s really great to also have friends who are not students, to just be able to hang out on the porch with neighbors and to have a grandma bring us meals sometimes or play with their grandkids,” Larmey said.

Among Larmey’s friends in the 10th & Page neighborhood is DeTeasa Brown Gathers, a longtime resident. A UVA Medical Center employee, financial administrator for Charlottesville’s First Baptist Church and co-chair for the nonprofit Descendants of Enslaved Communities at UVA, Gathers also serves on the Community Engagement Committee for UVA’s Memorial to Enslaved Laborers. She and her husband reside in their home, which has been home to Brown’s family for decades.

“I’ve known Zoe for three years, and she quickly caught my attention. She is so inquisitive and bright, and just so peaceful. I just love her,” said Gathers, who also serves on a community advisory panel for the Perkins House. “I need to adopt her as one of my own kids.”

Larmey occasionally stops by to drop off some banana bread that she had picked up for Gathers and her husband, Gathers said, and they will catch up on their respective lives. Gathers said she expects Larmey to be a leader in whatever field she eventually embraces.

“She could be a community activist; she could do something in politics. She’s so unique in how she’s able to deal with people with compassion and grace,” Gathers said.

At this point, Larmey said she isn’t ruling anything out, after taking a break from the academic grind.

“Whether that’s law school or a fine arts program or something related to humanitarian policy, I want to figure that out,” she said. 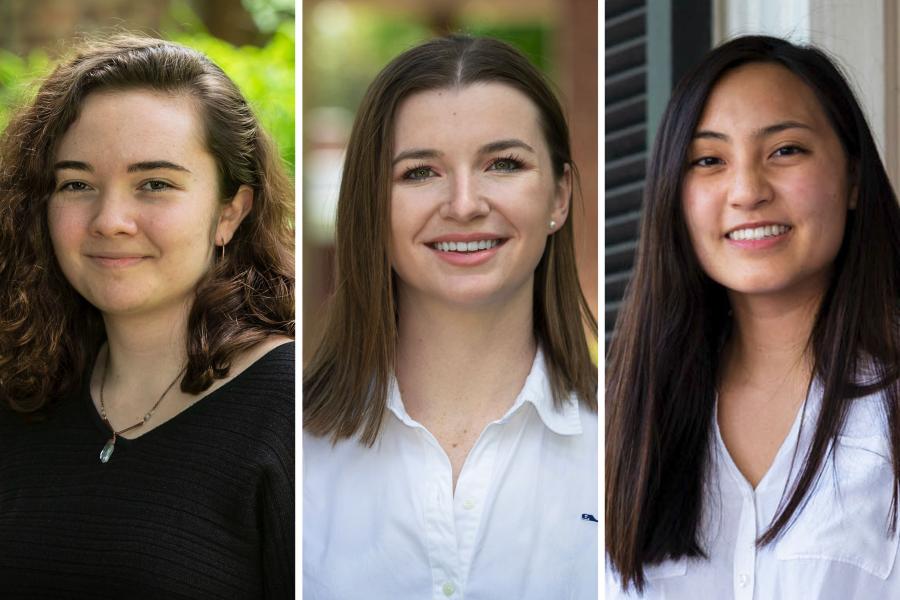 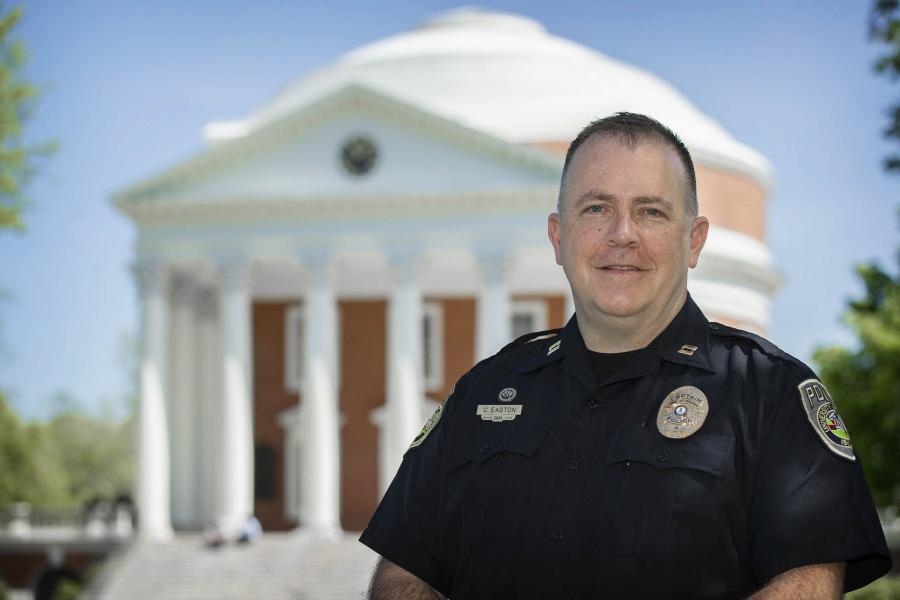 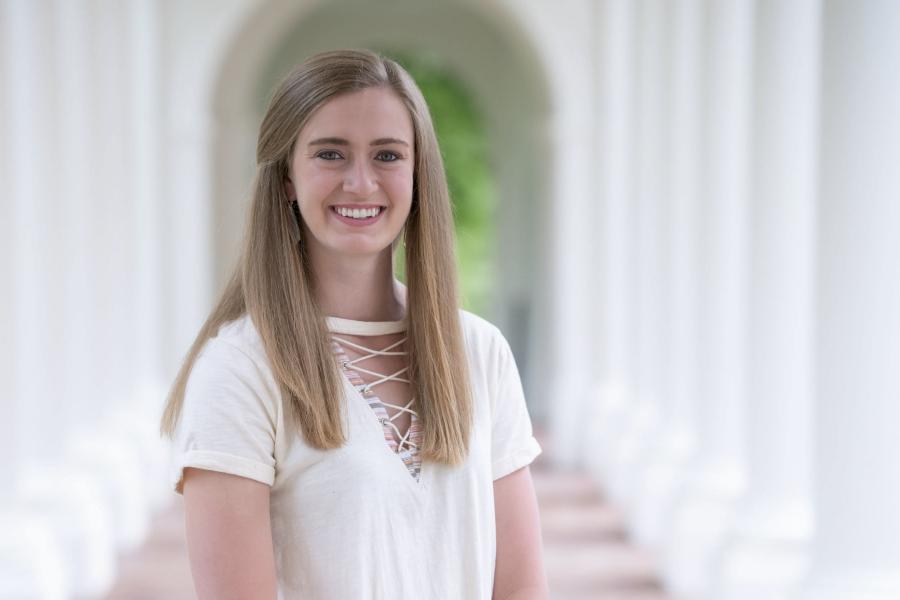