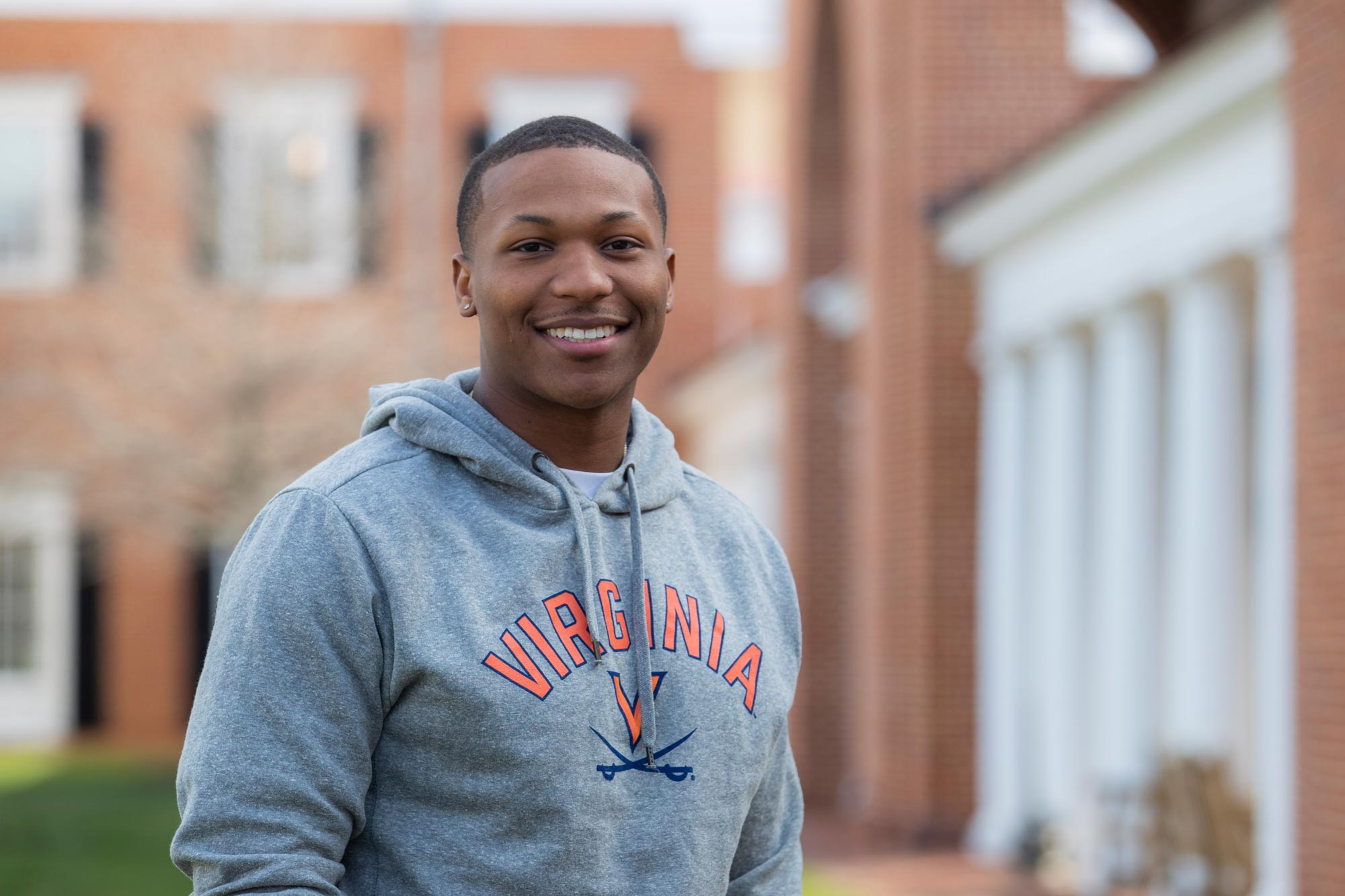 It didn’t take long for Antonio Brodie Jr. to understand that not all elementary, middle and high schools were created equal.

When Brodie was attending middle school in the Fort Worth, Texas, metro area, his parents fostered Brodie's 8-year-old cousin from St. Louis who lived in a notoriously under-resourced school district. His cousin, Marvin Davis, was unable to acquire the necessary reading, writing and math skills to advance beyond the second grade.

Yet within a year and a half of transferring to a new school in the Fort Worth area, Davis was thriving. (Brodie chipped in to help tutor his cousin.)

“The concept of [de facto] segregation and individuals being limited to certain schools depending on their ZIP code, creates a ceiling to the resources and quality of education that one receives – I wanted to explore that,” Brodie said.

Brodie has been doing just that – and much more – in a dual-degree graduate program at both the University of Virginia School of Education and Human Development, and the Darden School of Business.

His path to becoming a successful graduate student, which has included serving as vice chair of the Student Admissions Committee and vice president of the Graduate Student Council, was a circuitous one.

Originally, he had his eyes set on playing college basketball. As a standout high school player in the Fort Worth and Atlanta metro area, he was recruited to play at Princeton University.

However, Princeton had a coaching change and the new staff chose to recruit different players and go in another direction.

Afterward, Brodie played at an NCAA Division II college before opting to focus on academics at the University of California, Los Angeles.

In 2016, Brodie graduated from UCLA with a sociology degree and proceeded to work at Charles Schwab in Austin, Texas, for two years. He started in the private wealth management leadership program, and then advanced to operations. Afterward, he worked at Goldman Sachs in Dallas for two years as a regulatory operations associate.

Brodie’s transition into a consulting career led him to UVA in 2020. Initially, he had hesitations about coming to Charlottesville. It was a place that, as a Black man, he had only heard about in the media because of the white supremacists’ rallies.

Additionally, Brodie had recently celebrated the birth of his son and was reluctant to leave him behind in Dallas with the rest of his family. “But I took that leap of faith and made the decision to come,” he said. “It was a dream of mine to attend business school, but it was also a sacrifice –even though the choice was beneficial to my son’s future in addition to mine. 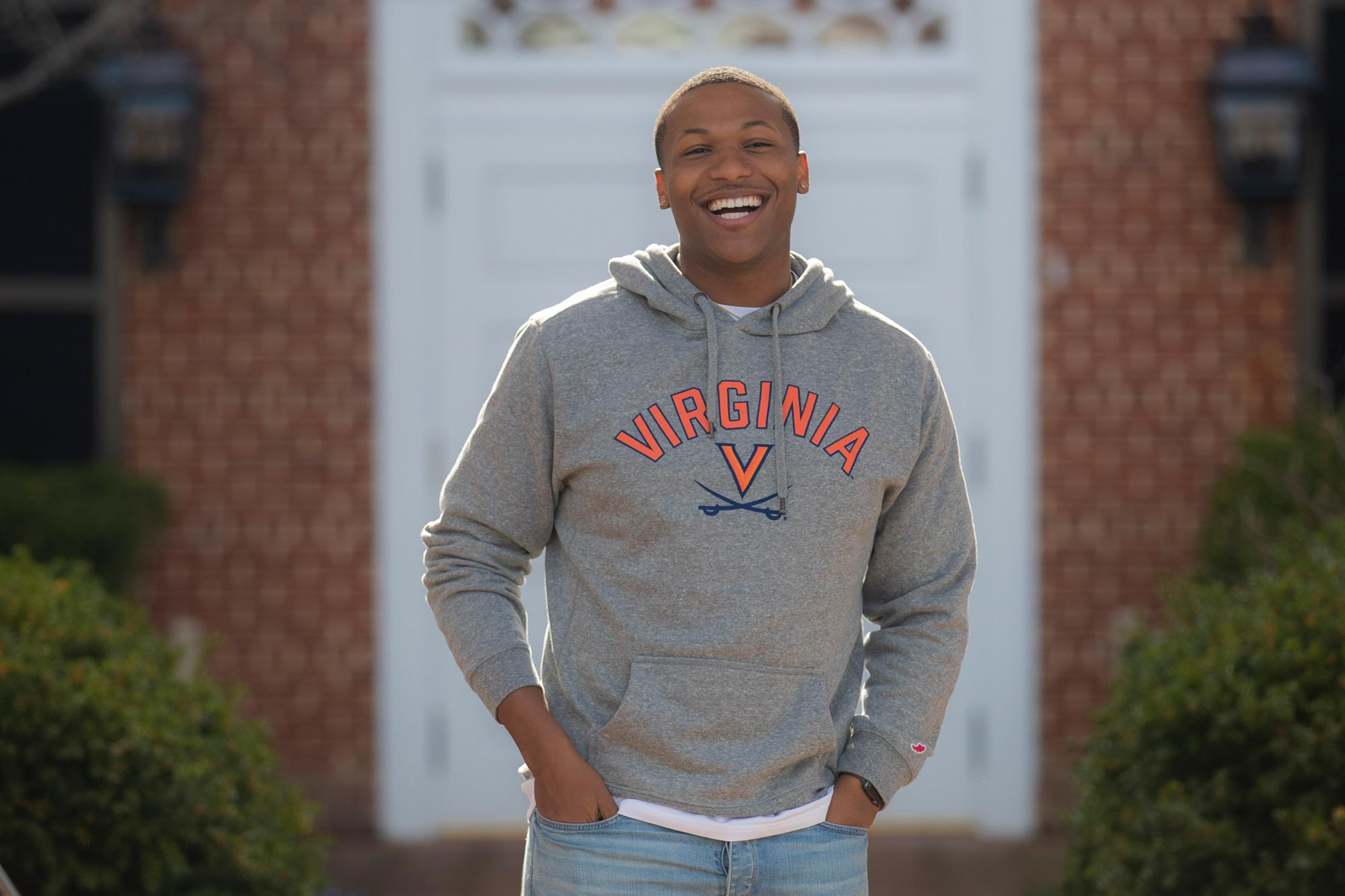 “The biggest thing I kept telling myself was, ‘When I’m older, I want my son to understand the value of persevering despite your circumstances, like my parents taught me.  ”

Brodie’s decision to attend UVA was further influenced by the death of his cousin. Davis was killed in a random shooting in 2019, two years after graduating from high school in St. Louis.

“Marvin is an example of the outcome of structural racism that is so embedded within the United States’ systems,” Brodie said. “Marvin’s experience fuels my ambition to eradicate systemic and structural racism within the public sector that determines the outcomes of underrepresented minorities in urban communities. Everyone deserves an opportunity to dream big and know that those dreams are attainable.”

Brodie was born in St. Louis, but moved around a lot as a kid while his mother served in the U.S. Army for 21 years.

“She instilled many values in me that came from her military background, and that has influenced how I approach situations in my own life,” Brodie said. “My mother taught me the values of love and authenticity. I always noticed her putting other people first and I truly love that about my mother – her consistent actions are the primary reasons why I believe in doing right by people.”

Brodie said his father, who has held jobs in various fields, has also been a major role model.

“He made a lot of sacrifices, with us moving all the time,” Brodie said. “He would always have to find new jobs everywhere we went. Seeing that molded me into the man I am – showing what you have to undertake in order for your family to succeed.”

At Darden, Brodie said, he has learned problem-solving skills that he believes will help him as he embarks on his new consulting career path.

“Coming into the program, there were particular concepts and strategic decision-making tools that I was not privy to,” he said. “Through the rigorous coursework, I’ve learned to think practically and apply theory to real-life experiences.

“For example, I also have developed a holistic perspective to complement quantitative thinking, such as consumer behavior, ethical considerations, as well as social determinants – just to name a few – that would impact a final management decision.”

Meanwhile, Brodie believes that his degree in education will provide a foundation of knowledge that he can use to inform future innovations within the public education arena.

“I always believed in understanding the universal ‘language’ of an industry before immersing myself in it,” he said. “As I think about my career in consulting, I plan to contribute to public sector projects that have a focus on education. Having my master of education degree allows me to better understand pressing issues of students, school administrators and parents. Accordingly, I can become a better public servant and consultant when making recommendations to future Fortune 500 clients.”

Being a dual-degree student these past two years certainly has not been easy. In going through the rigor of classes and traveling back and forth on weekends to Dallas to see his son, one of the big things Brodie said he has learned is the importance of making time for his mental and physical health.

“Without making time for these things, I find myself burnt out and not capable of giving my best contributions to my team, or work and school responsibilities,” he said.

After graduation, Brodie will return to Dallas to join the Boston Consulting Group, where he interned during the summer of 2020. He worked on an equity project aimed at reducing systemic racism in Dallas by addressing food deserts and alleviating food insecurities.

In the future, Brodie aspires to be in a role in which he helps drive diversity, equity and inclusion initiatives within the broader corporate strategy, in order to bolster the firm's impact and reputation in the communities they serve.

“That is what I aim to do,” Brodie said.

What’s Next for UVA’s Class of 2022? END_OF_DOCUMENT_TOKEN_TO_BE_REPLACED