Class of 2022: This Future Surgeon Draws Inspiration From Her Sister 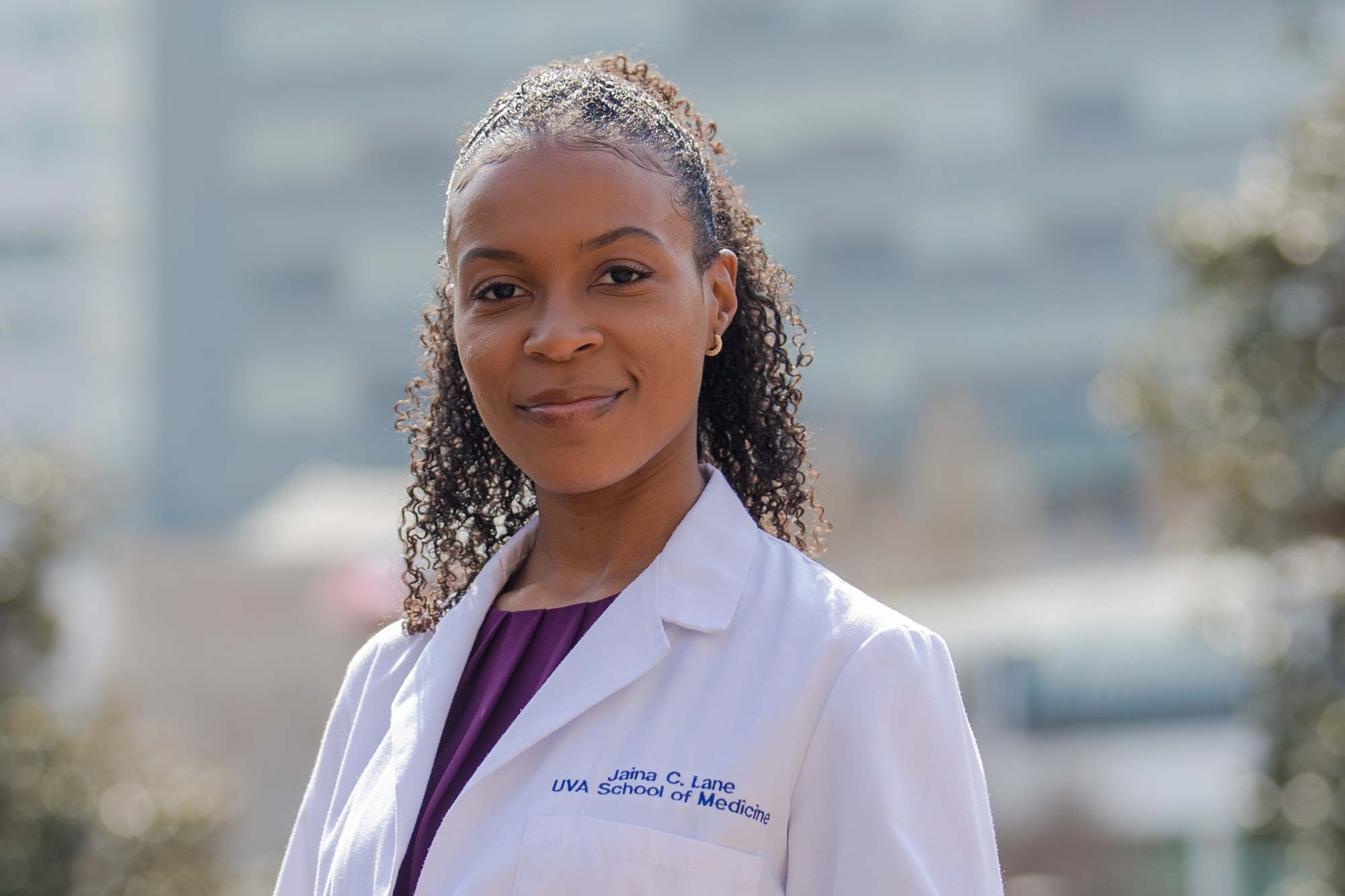 Jaina Lane has blossomed at UVA’s School of Medicine. She’ll soon move on to residency at Temple University in Philadelphia. (Photo by Erin Edgerton, University Communications)

Kids can tend to dream big when contemplating their future. Perhaps they see themselves as the star of the next bingeworthy Netflix series, or that’s their song topping the Apple Music charts, or that’s them capturing a gold medal in the Olympics.

A 12-year-old Jaina Lane, though, didn’t have her sights set on Hollywood. She wasn’t looking for a record deal. And sports weren’t her thing.

Their expressions would speak for themselves. “It was a mouthful for a middle schooler.”

Lane is now 25 with a bachelor’s degree in chemical and physical biology from Harvard University. On May 22, she graduates from the University of Virginia School of Medicine. Next, she’s off to Philadelphia as a surgical resident at Temple University.

It’s all a fancy way of saying, yes, Lane’s on the path toward achieving her highly specific childhood goal.

How did she arrive at this dream, anyway?

That answer has roots in an information session she attended as a pre-teen in the Atlanta area, where she learned about Operation Smile, a nonprofit organization that provides free facial reconstructive surgeries for underprivileged children and young adults around the world.

“I just fell in love with the field,” Lane said. “I saw those kids and just how impactful these surgeries were and I thought to myself, ‘I can’t think of a better way to contribute and serve in the world than to help these kids who were born differently.’”

Just a few years later, on Feb. 16, 2013, Lane’s sister Kristin Mack was born with microtia, meaning the external part of her right ear was small and not properly formed, which affected her hearing. Plastic surgery would eventually be required.

“For me,” Lane said, “I was just thinking about those kids that I learned about in middle school and I realized, ‘Hey, I was going to walk through a very similar journey with my own little sister.’

“That was a really strong confirmation for me that I was on the right path.”

Lane, then a medical student, was granted an all-access pass to her future as she forged a relationship with her sister’s plastic surgeon at the Children’s Hospital in Cincinnati.

Lane was there for Mack’s surgeries – a detailed process over a year that involved removing pieces of Mack’s rib cartilage and reforming it into the shape of an ear – and the ensuing physical therapy sessions.

“The experience taught me how to understand my future patients from their perspective and just understanding how resilient these kids really are, going through all of this,” Lane said. “My sister, she’s a performer at heart. She loves being in front of people. And it’s so ironic because she has these physical differences. But it doesn’t keep her from who exactly she is.

“It’s just been amazing seeing how her plastic surgeon has been able to give her more confidence to be that person.” 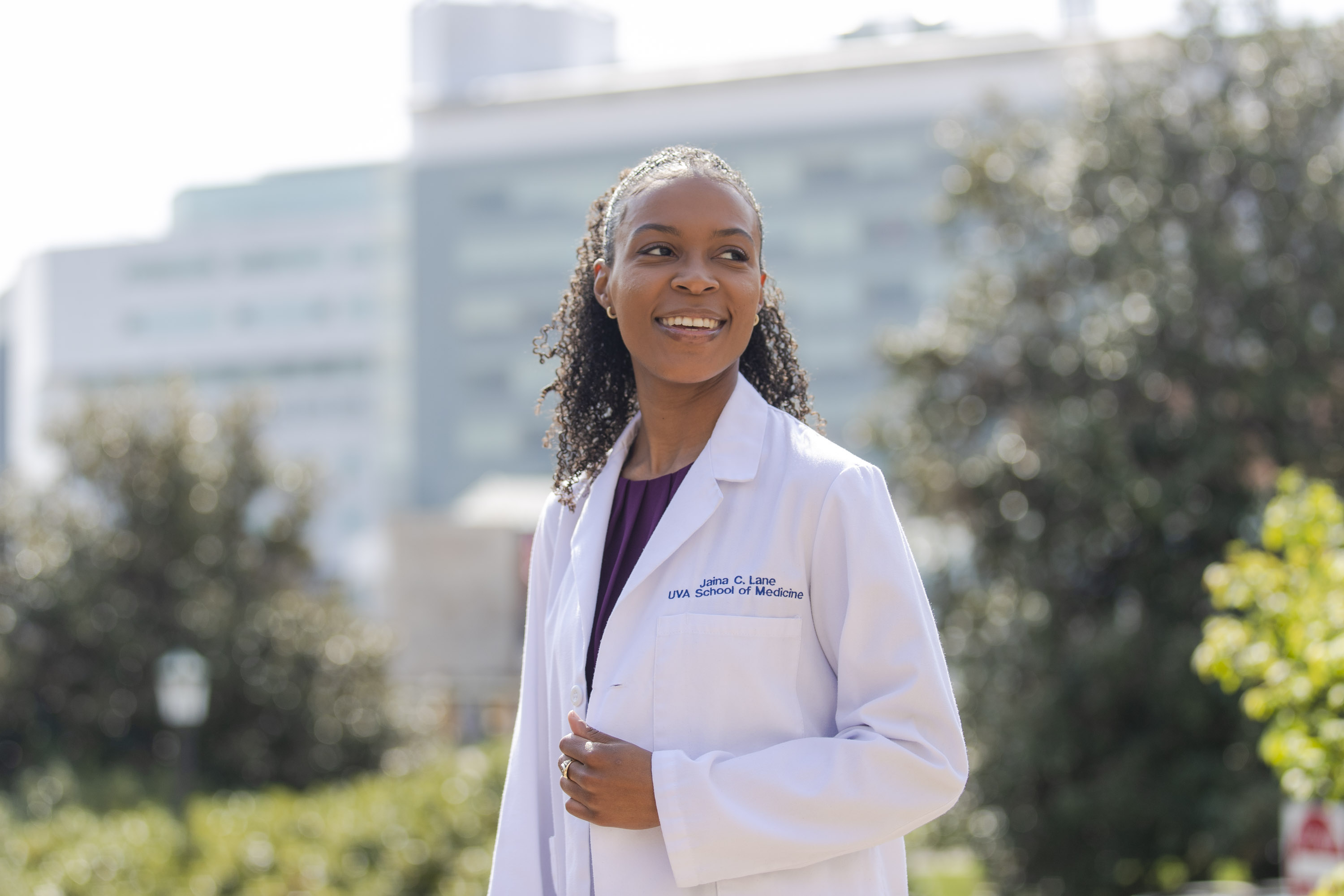 Whether as a big sister or a mentor in the medical community, Jaina Lane has affected many lives through her natural ability to lead. (Photo by Erin Edgerton, University Communications)

Mack, who was 7 after her final surgery, could lean on the love of her sister and mother, Queen Lane, in her formative years. Jaina and Queen would fix Mack’s hair in a way that covered her deformed ear. They’d also make sure she had her green stuffed animal from “Henry Hugglemonster,” the child’s favorite show.

“It’s something we don’t think about as much now,” Jaina Lane said. “Sometimes, kids still ask about her ear, but it’s gotten to the point where she’s able to answer them with, ‘You know, yeah, I was just born this way.’

“She makes friends faster than I ever did. She’s great.”

Jaina was the more reserved of Queen Lane’s two daughters, the ace student who skipped the second grade. Mack, 9, is the outgoing type who, Queen said, has been known to burst into song while in the aisles of a grocery store and can quickly become the most popular kid on the playground.

But, in watching their relationship blossom over the years, it’s clear to the mom that opposites attract.

“Kristin was automatically drawn to Jaina,” Queen said. “It’s her big sister, this person who is loving her and nurturing her through all aspects of these experiences – medically, mentally, physically. Together, they’re just like the perfect pair. They were made for each other.”

Jaina Lane’s passion for guiding young people is ongoing. She’s taken a variety of leadership roles at UVA and in the medical field.

As diversity and inclusion coordinator for the Association of Women Surgeons in November 2020, Lane organized a virtual “Day in Surgery Life” event for more than 100 underrepresented minority students. A five-part thread about the session is pinned to the top of Lane’s Twitter account, including the line, “Proud to have helped empower and reflect the diversity of the next generation of surgeons.”

I knew I wanted to be a surgeon since middle school, but I had no idea what kind of path was ahead. This year’s Association of Women Surgeons Day of Service Virtual Event was the experience I wish I had. Over 100 URM high schoolers around the country were given a (1/5) pic.twitter.com/NXPY0k3ZjH

Lane, who has been the recipient of consecutive Excellence in Minority Recruitment awards from the UVA chapter of the Student National Medical Association, said she’s trying to create experiences that she didn’t have as a Black child interested in medicine.

A recent study by the career website Zippia, which analyzed 30 million profiles, found that only 2% of surgeons in the United States are Black.

“We ended up doing a survey [after the November 2020 event] where we looked at how the students were impacted before and after the event,” Lane said. “We found that students perceived the field of surgery as more diverse after the event, with statistical significance.

“There’s this phenomenon of, ‘If you can see it, you can be it.’ So, being able to see that manifest and be able to contribute that, I think is really meaningful.”

Lane, through her work in the Student National Medical Association , has become a mentor to several pre-med UVA students, including Christian Jenkins.

“I think [Lane] was one of the only people that I met at UVA who had the same passion for really guiding minority students through the pre-health process at UVA,” said Jenkins, who graduated in 2021 and will soon pursue his nursing degree at Johns Hopkins University. “She was super adamant about helping undergraduate students and really supporting them in any way.”

Lane and Jenkins would meet regularly in the Claude Moore Health Sciences Library. Jenkins knew to come prepared because his mentor kept tabs on his exam schedule.

“I remember always thinking that I had to do well on my tests,” Jenkins said, “because it was going to be hard to tell Jaina if I didn’t. It was inspiring.”

Whether with her sister or mentees, Lane has a natural way of instilling confidence in others.

It’s safe to say her future patients will reap those same benefits. What started as a childhood ambition could turn into a lasting legacy.

“I’m excited about that. She’s that person, that pioneer who goes forth and makes the world a better place.”

At UVA, There Is a Club for Everyone END_OF_DOCUMENT_TOKEN_TO_BE_REPLACED