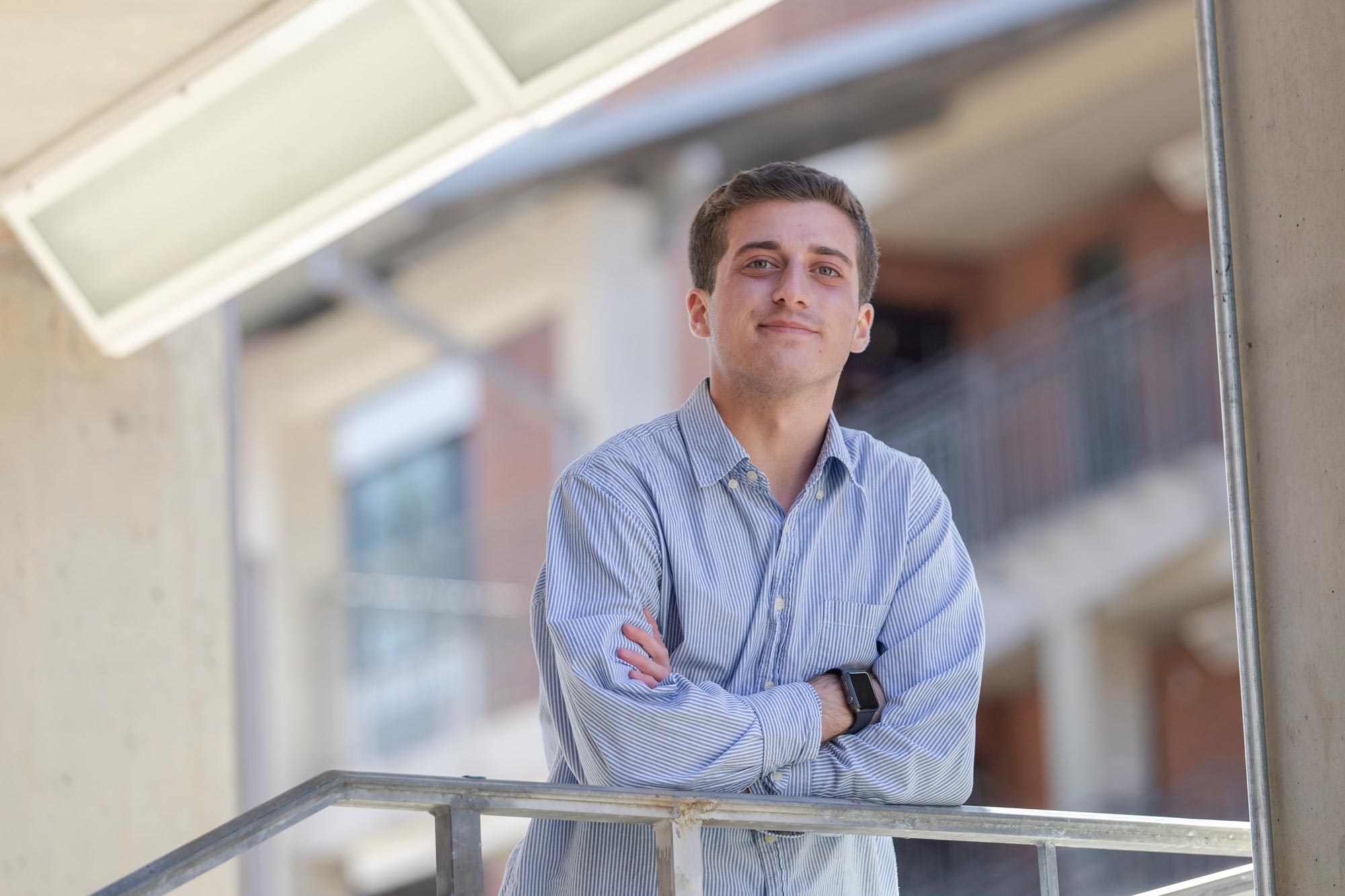 Jack MacLeod will graduate May 22 from the School of Architecture with a Bachelor of Science degree in urban and environmental planning and a minor in historic preservation. (Photo by Erin Edgerton, University Communications)

If you ever find yourself in a conversation with Jack MacLeod, prepare to have your socks charmed off.

A natural and enthusiastic interlocutor, MacLeod sprinkles his conversations with phrases like “the best thing ever” and “this has been so much fun!” It’s hard not to get swept up by his enthusiasm.

MacLeod, a member of the Class of 2022, is about to take his next step into adulthood when he graduates from the University of Virginia’s School of Architecture on May 22. He will earn a Bachelor of Urban and Environmental Planning, with a minor in historic preservation.

MacLeod can trace his fascination with infrastructure and how communities connect to his childhood, born-with-it love of toy cars, trains and highways.

“As a kid I loved traveling on highways,” he said. “Whenever we would go to Boston to visit our family, I was obsessed with going under The Big Dig,” ’an underground tunnel bypass road through South Boston.

His fixation with urban design was solidified when he was just 9, and memorialized on his mother’s Facebook page, when after a visit to Cambridge, he declared he wanted to study at the Massachusetts Institute of Technology.

Her remarks about MIT not being covered by the Virginia529 College Savings Plan were prophetic. Thirteen years later, AccessUVA, a financial aid program that meets 100% of students’ demonstrated financial need, would seal the deal for MacLeod. He was going to be a Wahoo.

But he was not always certain he wanted to be. “’I heard that the competition culture was intense,” he said. “So, I was pretty put off by UVA, I would say. But I came, and much to my surprise, I found that a lot of those stereotypes weren’t true within the communities I joined’,” he said.

His passion for the discipline of urban planning was also guided by where he grew up: his beloved Virginia Beach. “Growing up in Virginia Beach, sea level rise was a massive issue,” he said. “It is the second most impacted place in America by sea level rise right after New Orleans.”

MacLeod added, “I think it’s stuck with me; an innate knowledge of how people share a relationship with where they’re from, but also how the communities that we develop and the infrastructure that we have are sometimes at odds with the environmental surroundings that they were built upon.”

In his second year of college, the architecture student was awarded a Gilman-McCain Scholarship, which is funded by the State Department. The study-abroad program is available to dependents of active-duty members of the military. (MacLeod’s father is in the Navy.)

The coronavirus pandemic precluded MacLeod from going abroad, however. Still, he made the best of it, and as with his AccessUVA financial aid package, he said he was grateful to be awarded the scholarship. “I felt very, very lucky and super humbled that that opportunity was yet again afforded to me,” he said.

So instead of going to Morocco as he had hoped, MacLeod took a remote, four-month internship with SEWA Bharat, a nonprofit in India that supports women in the country by helping them with land rights issues in urban areas.

“I had never worked in an international setting before,” he said. “It was a lot of expanding my language on urban planning themes and ideas, but in a context that was entirely different from what I experienced at school. So much of what we do in the A-School is based on our immediate surroundings that it was really interesting to learn about how housing and land use policy are implemented and regarded by community members in a place that is totally different than Charlottesville. It was a really cool experience.”

Since has first year, MacLeod has spent all of his summers in Charlottesville and made it a priority to really get to know different parts of the city. His coursework also plunged him into the local community.

“A lot of what we learn is about Charlottesville because it’s right outside of our classroom doors,” he said. “In my studios, a lot of the issues that we’ve tried to tackle revolved around affordable housing, which has reached crisis-level in Charlottesville.”

MacLeod said he thinks the issue is one a lot of students don’t really think about. “You come here for four years, you get your education and then you sort of leave without ever having to confront the nuances of the relationship that your school shares with the town that it’s hosted by,” he said.

Last fall, he and a team of his classmates participated in a neighborhood planning studio.

“Our assignment was to pick a neighborhood or an area of Charlottesville so that we could propose design and policy interventions for certain issues the community was facing,” he said.

They chose an area in the Woolen Mills neighborhood, which was once Thomas Jefferson’s property. It was an industrial area and home to a working mill from the 1790’s to the 1960’s. The company helped employees purchase property surrounding the mill to build homes. Today, it is zoned for mixed use development.

They focused on connecting the residents of the Carlton View Apartments to resources and amenities because the apartments are designated as affordable housing’.

“Our goal was to come up with solutions that would allow the Broadway Street corridor to develop in a way that supports the low-income population there, maintaining or trying to improve its accessibility, and introducing a policy framework whereby businesses, grocery stores, pharmacies and other key resources could be developed in that area,” he said.

They also looked at ways to bring in more affordable housing while not displacing the current residents. “It was really interesting to be able to apply what I was interested in, in a hands-on sort of setting,” MacLeod said.

Suzanne Moomaw is the chair and associate professor of urban and environmental planning in the School of Architecture. She was MacLeod’s academic adviser “and a wonderful mentor,” he said.

“I remember in class, I asked the students to discuss their vision for cities, and I remember Jack saying something like, ‘I love cities and I love the relationships I have. I want cities, all cities and all people, to have that kind of love and attention and sustainability in our cities.’

“It was that kind of attention that really encouraged me to get to know him even better. And he really is an exceptional student,” she said.

After graduation, MacLeod will move to Nashville for a job with an infrastructure solutions consulting company. “I’ll be working as an environmental planner on projects that they have primarily with Tennessee’s Department of Transportation,” he said. “I’ll be working with environmental policy and law to help promote sustainable transportation practices across the state and region. 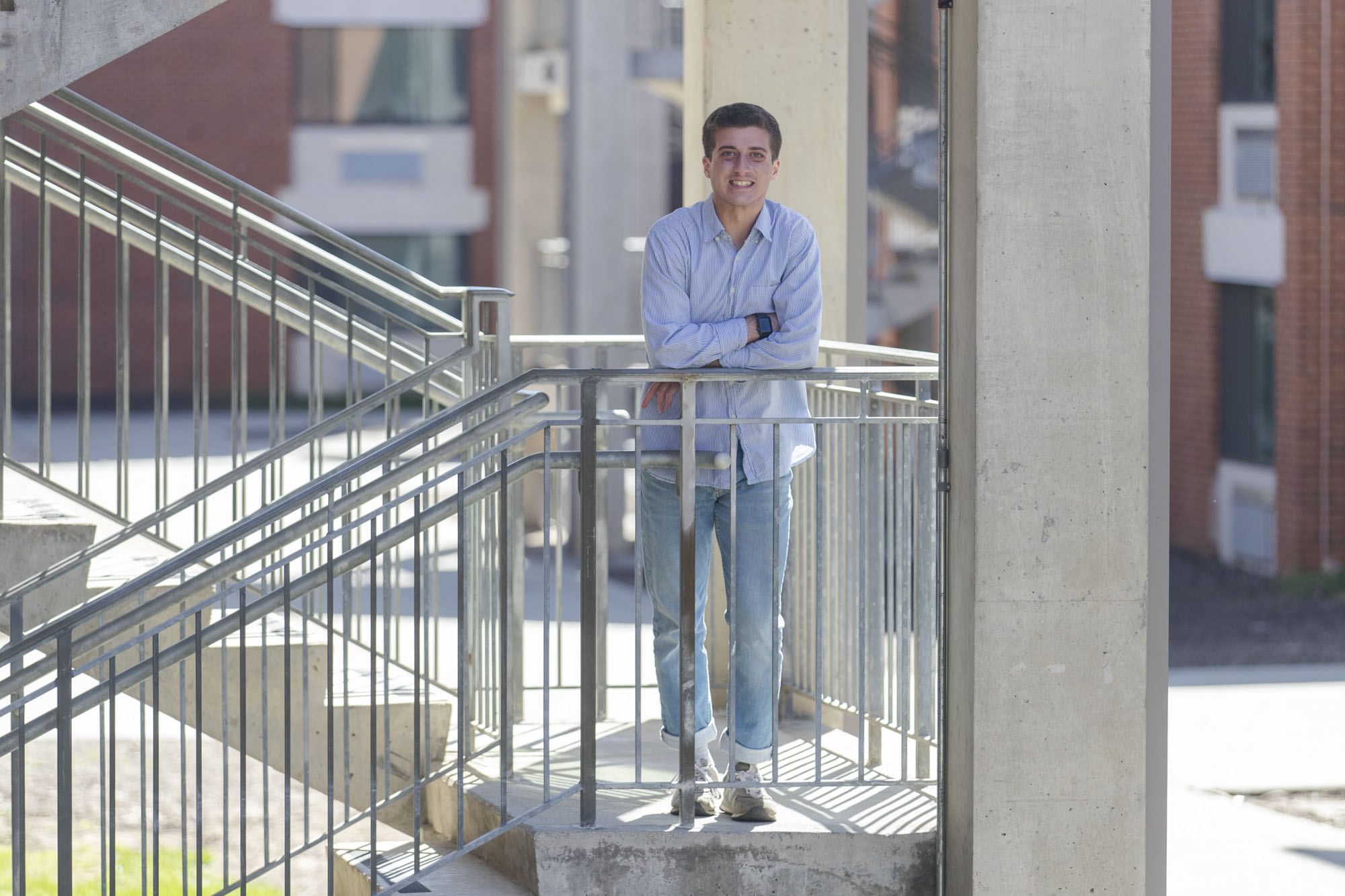 After graduation, MacLeod is headed to Nashville for a job with an infrastructure solutions consulting company. (Photo by Erin Edgerton, University Communications)

He said it’ll be a big move because he’s never lived outside of Virginia, “but I’m really excited for it.”

“The summers have all been such a formative part of my time here at UVA, just spending time with people who I normally wouldn’t hang out with during the school year, but also learning how to operate in Charlottesville without the influence of taking classes or being a full-time student,” he said.

“It’s a town that’s big enough where you’re never going to get bored, but it’s also small enough to foster connection. UVA has supported me too, and comforted me in a way, as I tried to figure out who I am and what I wanted to do post-grad. So I’m going to miss Charlottesville a ton. It’s going to be really hard to say goodbye.”

At UVA, There Is a Club for Everyone END_OF_DOCUMENT_TOKEN_TO_BE_REPLACED