Class of 2023 is Officially Welcomed to UVA at Opening Convocation

Class of 2023 is Officially Welcomed to UVA at Opening Convocation 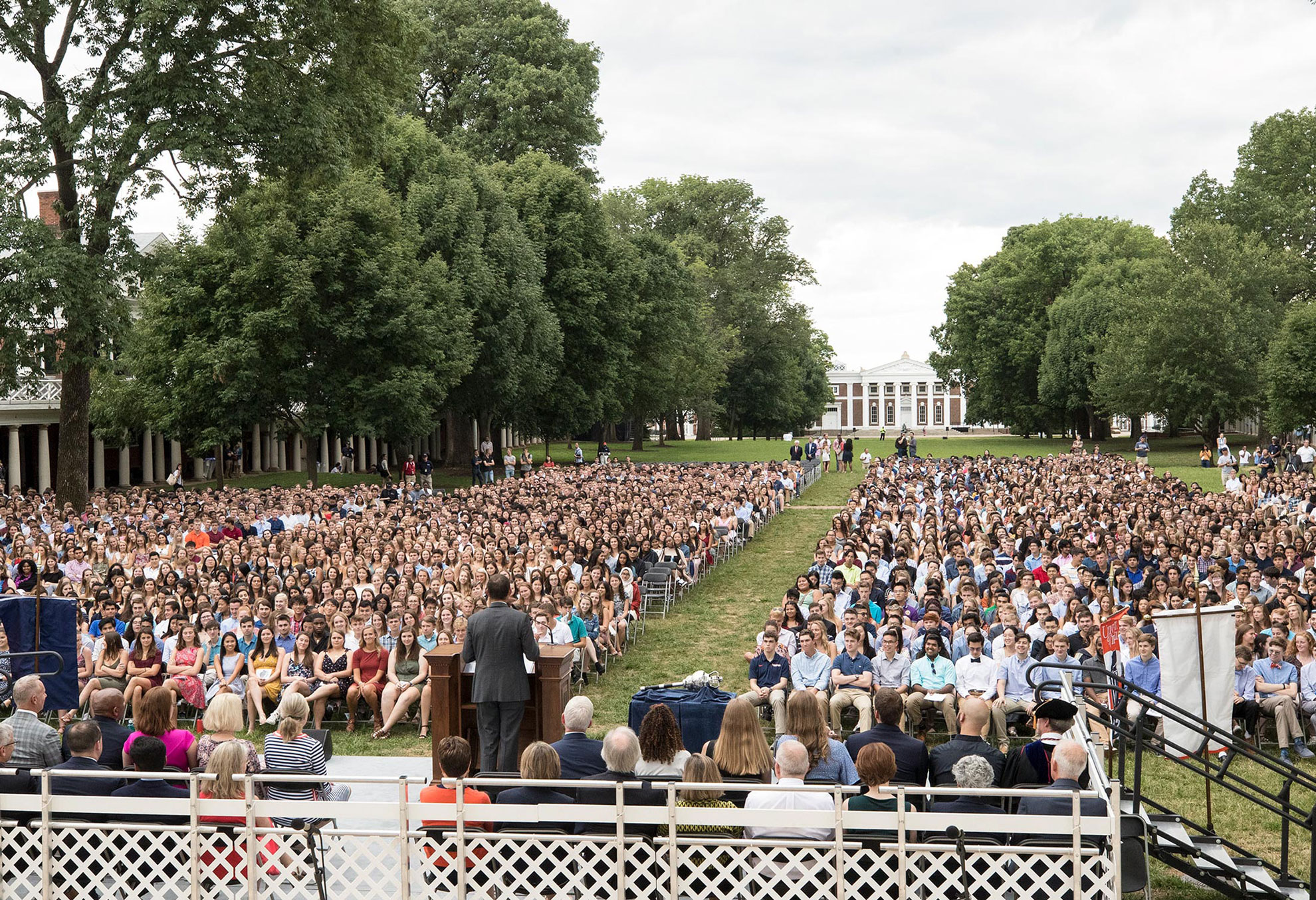 The University of Virginia’s Class of 2023 gathered on the Lawn on a beautiful Sunday evening for an official welcome to UVA at the Opening Convocation and Honor Induction ceremony.

As soft breezes blew during an unusually pleasant summer night, more than 3,900 first-year and transfer students sat in neatly assembled chairs facing the Rotunda to start their careers as Cavaliers. The symbolic staging marks the first time the class assembles in its entirety at UVA; during graduation, known as Final Exercises, they will face the other end of the Lawn.

There are 3,920 members in the class of 2023. About two-thirds come from Virginia. The remaining third hails from 46 different states and 78 different countries. Almost three-quarters of the incoming class went to public high schools. There are 623 transfer students, including 296 students who transferred from Virginia community colleges. And in the year that marks 50 years of co-education at UVA, more than half of the members of the Class of 2023 are women.

Ahead of the ceremony, the University Singers performed “Gaudeamus Igitur,” a lofty Latin composition that extols the energy and promise of youth and education.

Allen Groves, the associate vice president and University dean of students, began the program by welcoming UVA’s newest students to Grounds. “I would like to be the first to formally welcome you to the Lawn,” he said. Groves said he wanted the Class of 2023 to be happy, healthy, safe and to have each other’s backs. 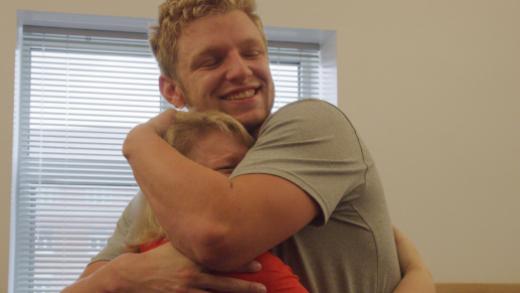 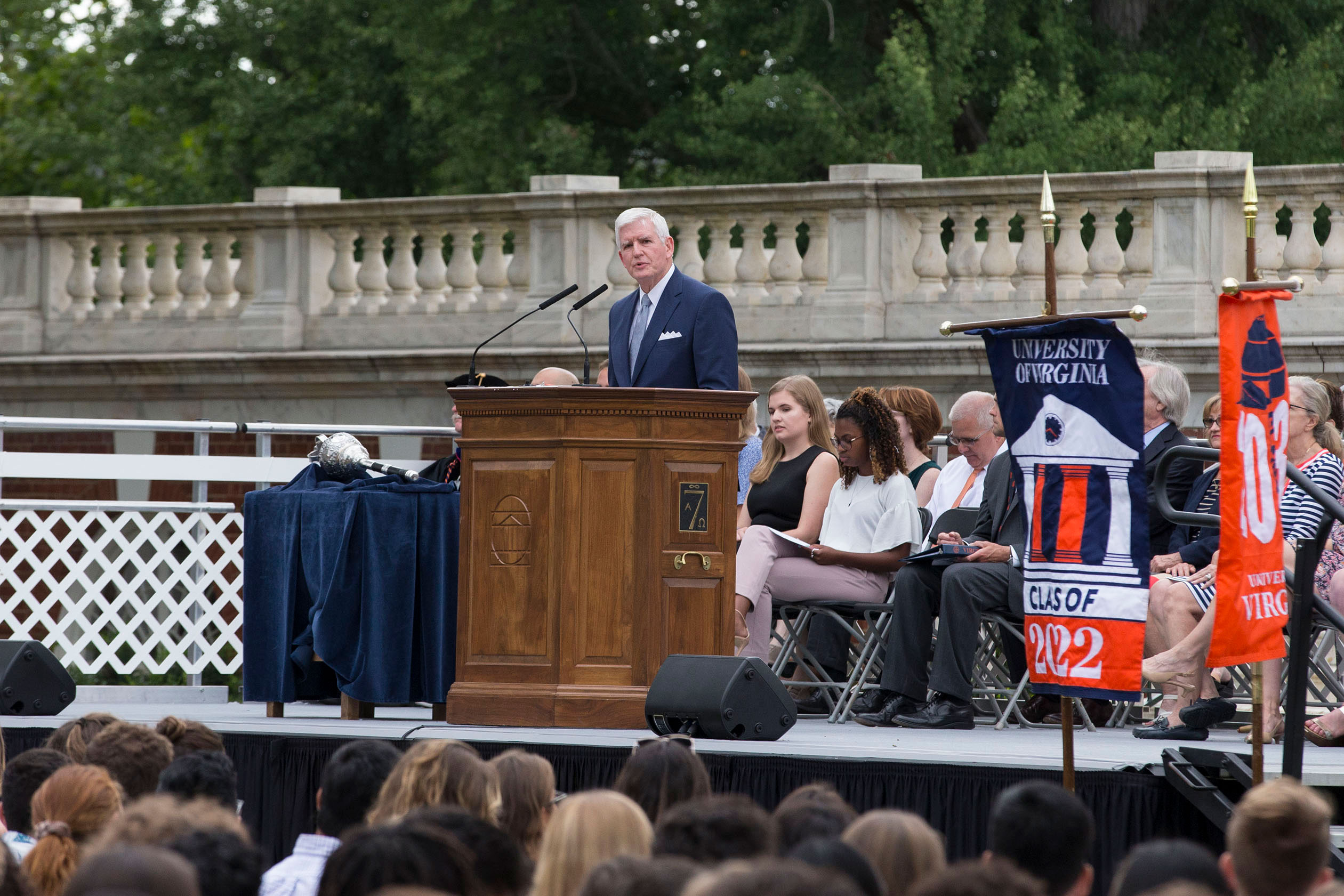 UVA’s ninth president, Jim Ryan, then approached the podium to offer his salutations.

“On behalf of the entire community here, I would like to welcome you – the Class of 2023 – to one of the finest universities in the world,” he said.

He drew a metaphor between college life and Space Mountain, the thrilling and, in Ryan’s case, terrifying indoor roller coaster at Disney World. He visited as a preteen, standing in the long line with his sister and ultimately growing too anxious to ride. When he dashed back to his parents, unable to face the ride, they assured their son that it was fine and only a ride, after all. But then his dad posed this scenario: if Ryan felt comfortable returning home and telling his friend Scott Peters that he’d decided not to ride Space Mountain, then he should stick with his plan. But, if he did not want to have that conversation, maybe he should reconsider. 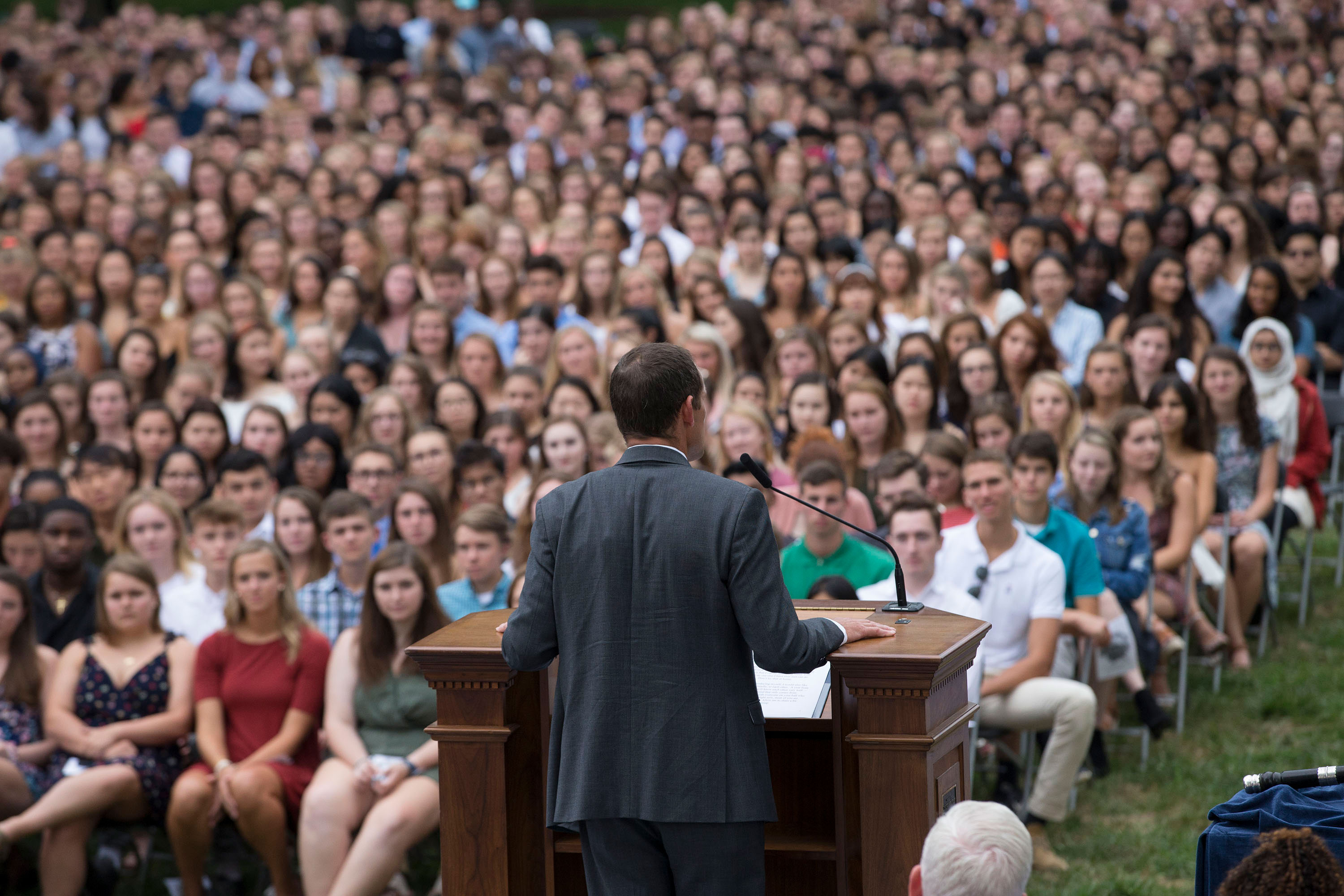 In his first address to the Class of 2023, President Jim Ryan encouraged students to be open to new experiences and overcome fears.

How could it be that the senior Ryan was telling his son to basically give in to peer pressure? “Whatever happened to ‘If your friend jumps off a bridge, would you jump as well?’” he asked. 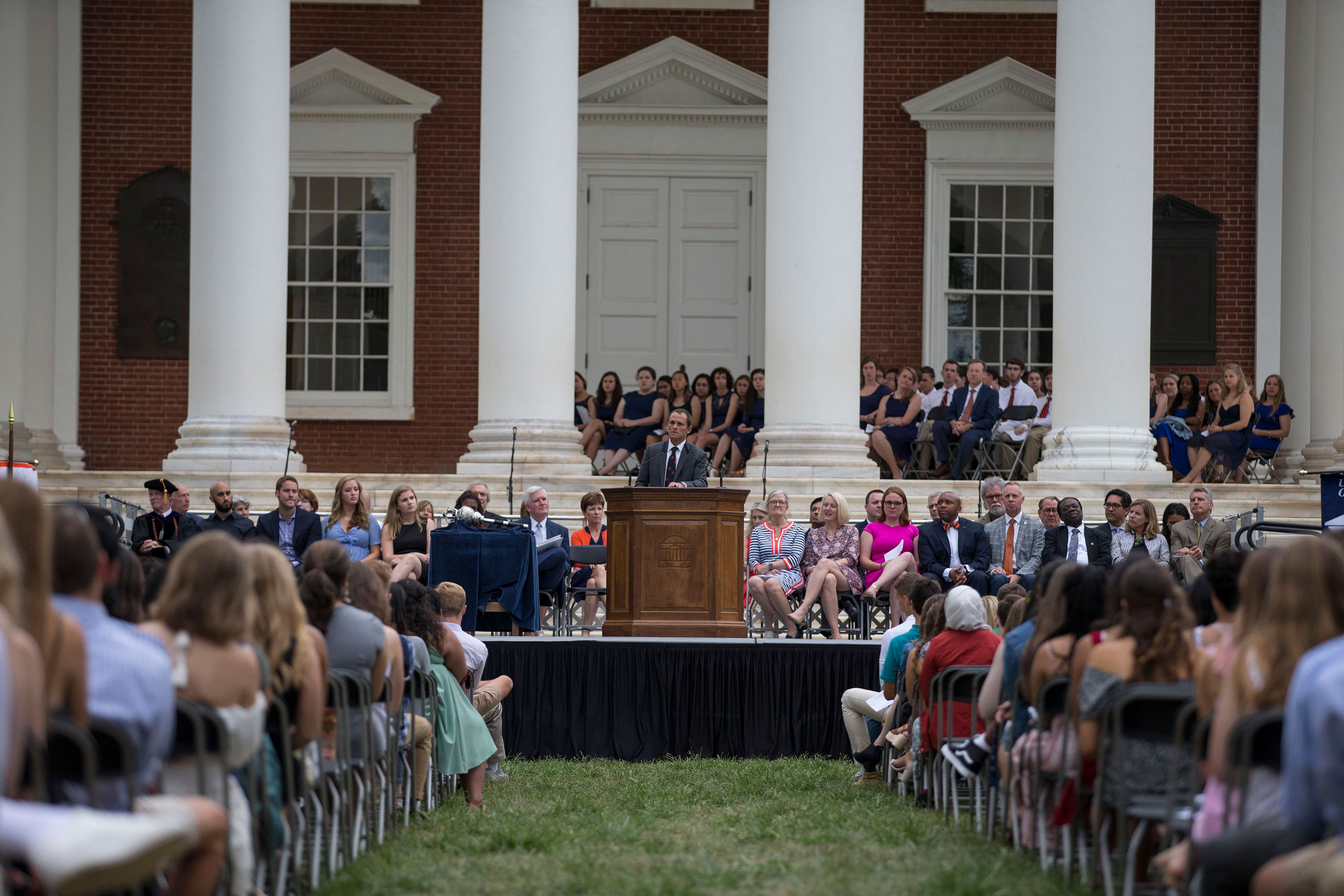 “But my dad was right.” The younger Ryan did want to ride Space Mountain and in this case, peer pressure helped him overcome one of his fears. (Ryan was quick to point out that, in most cases, peer pressure is not helpful.) The next day he got back in line with his sister. “I got on the ride, and I loved it,” he said. “I was scared and I think I screamed a few times. OK, maybe I cried a little. But I ultimately found the ride thrilling.

“The lesson I drew from this, the one that has stayed with me, is that if you really want to do something, don’t let your fear of the unknown prevent you from trying,” Ryan said.

In this way, Ryan continued, Space Mountain is like college or some other large challenge one might face. Dig in, he said, explore and seek out challenges and know that it will not always be easy. “In fact, I would encourage you to find at least one thing – one lawful thing, I should add –one lawful thing that scares you or makes you anxious, and try it – whether it’s a class that seems too hard or an activity that you’ve never done before.”

Around 7 p.m., as clouds continued to gather, creating a lovely pinkish and blue hue overhead, the ceremony pivoted to the honor induction, when students make the important pledge not to lie, cheat or steal while enrolled at UVA.

Donna Byrd, the Honor Committee chair from 1991-92 and a former Lawn resident, gave the keynote address. Byrd is the founding publisher of The Root, a cutting-edge online news publication aimed at African Americans. 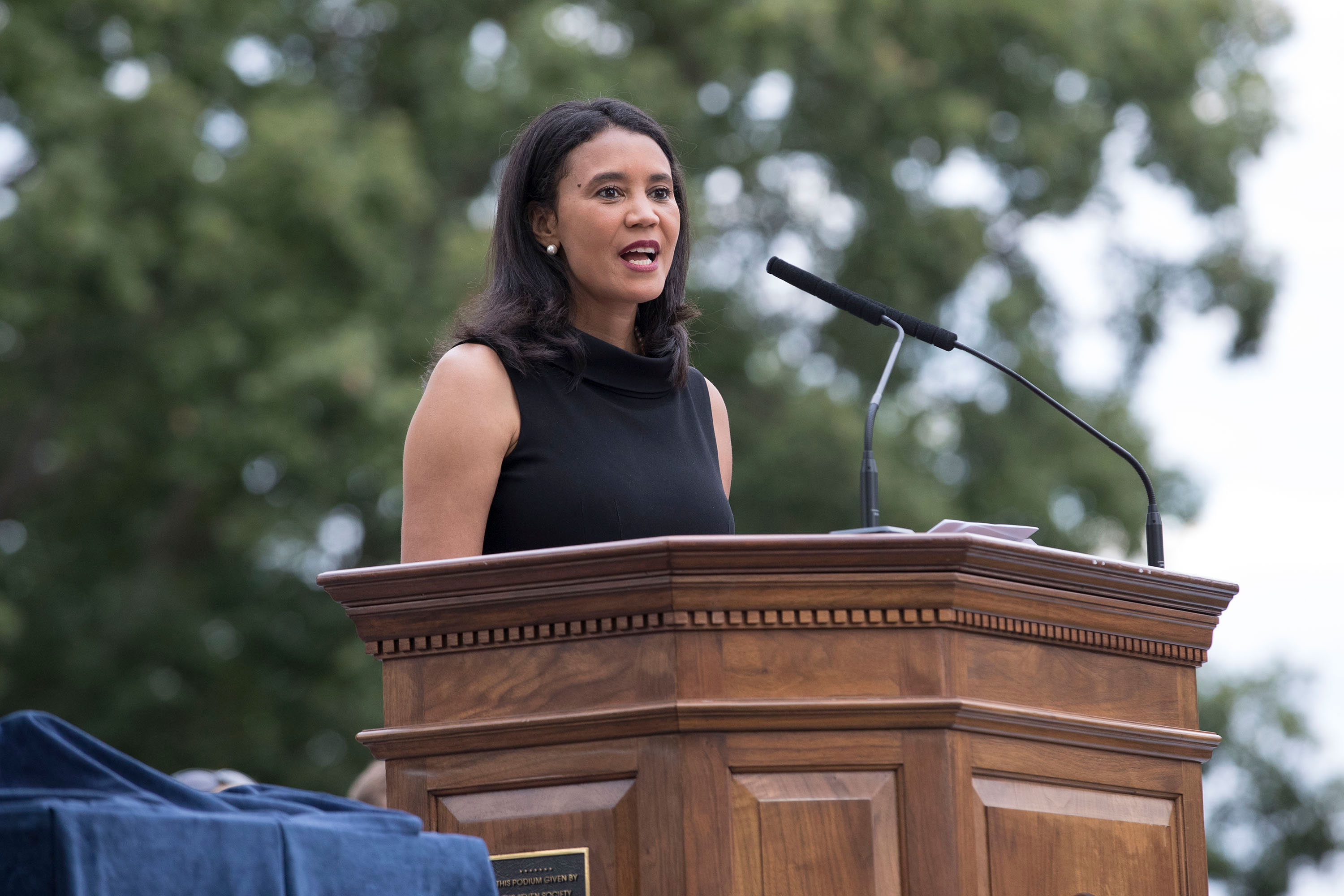 With a broad smile, Byrd told the Class of 2023, “It feels great to be back on Grounds!”

She also gave a shout-out to her cousin, Alex, an incoming first year, as well as residents of Kent House, which was her first dorm.

“In my mind you, are at the best school in the entire country,” Byrd continued. She said the Lawn had always been a space that gave her clarity and discernment and that in time, it will also become to feel like home to UVA’s newest students.

She put great emphasis in UVA’s honor code system. “Over the next four years, you will have chances, when no one is watching, to decide between right and wrong,” she said “What you choose in those moments is what you will become.” 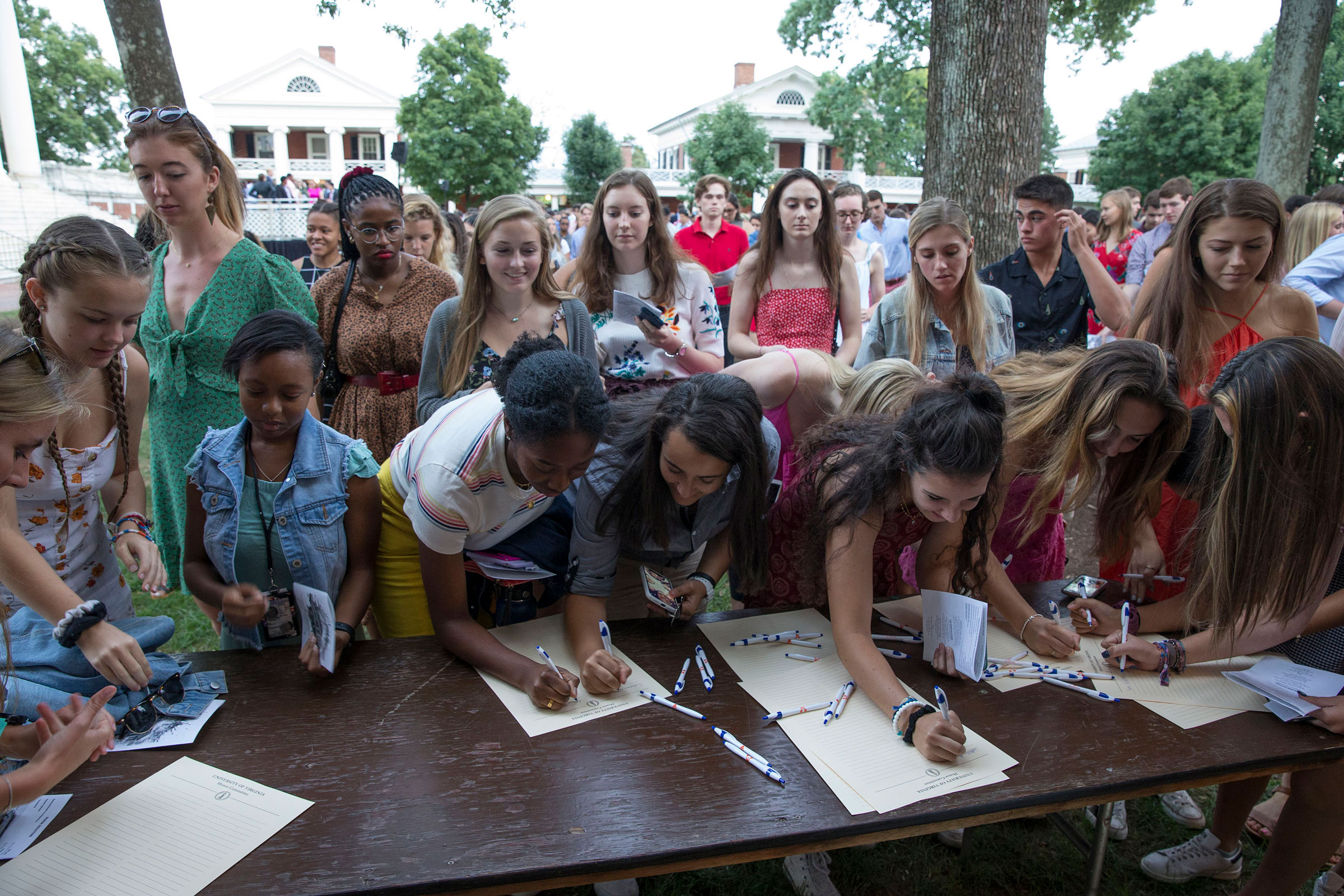 Students signed the Honor Pledge on Sunday evening as part of Opening Convocation.

As Byrd closed her remarks and the sky dimmed, a chorus of humming katydids replaced the opening musical performances and students fanned out to sign their individual pledges of honor.

“We admitted you and recruited you because we think you have much to gain by being here and we have much to gain by having you among us,” Magill said. “I am absolutely confident you are in the right place. And not only do I believe you are in the right place, I think we collectively should be partners in this common enterprise of accumulating additional knowledge, transmitting that knowledge to the next generation and serving the greater good.”

Magill said graduate students contribute to the University’s teaching, research, and service mission, are partners in creating and innovating at the University and play a vital role in advancing UVA’s tripartite mission.

She offered some examples of stand-out students.

Sophie Abramowitz, a Ph.D. candidate in the English department, is teaching UVA’s new curriculum in the College of Arts and Sciences. Magill noted Abramowitz has wonderful student reviews. One in particular called Abramowitz “an amazing and perhaps life-changing” teacher. 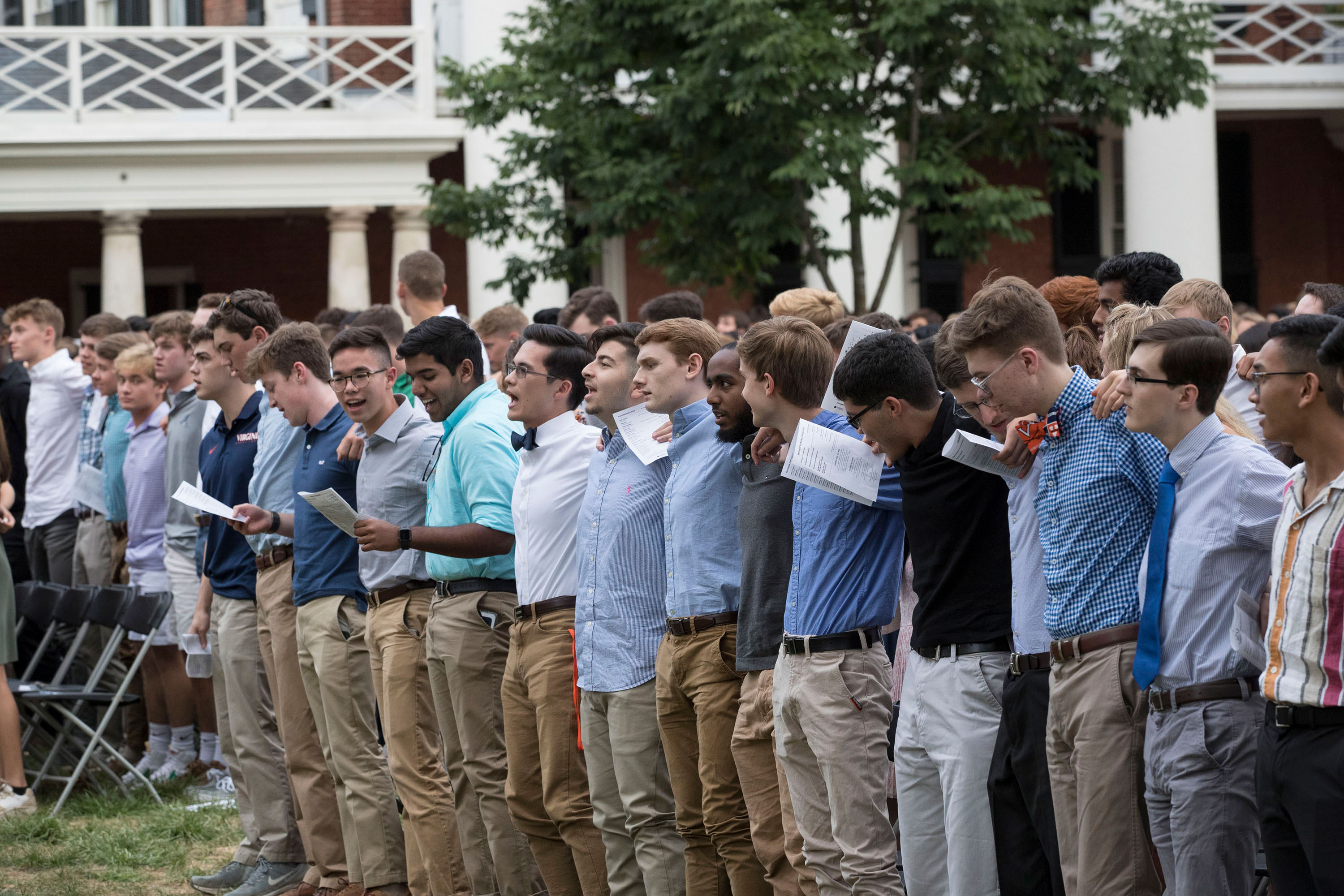 The Class of 2023 sang the Good Old Song together for the first time.

The provost urged graduate students to take advantage of opportunities offered by the Center for Teaching Excellence and the Graduate Public Humanities Lab, to name a few. She also asked students to grow by reaching beyond their disciplines, finding mentors and engaging with the local community.

The conclusion of both ceremonies, graduate and undergraduate, marked the official start of the new academic year. Classes begin on Tuesday. 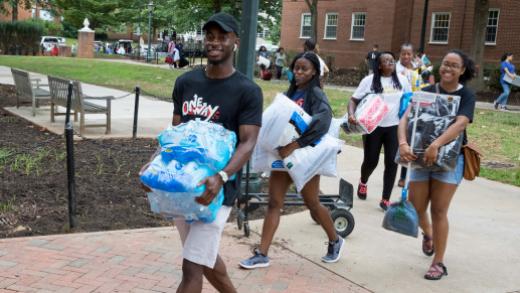 They’re Here! Class of 2023 Descends on Grounds for Move-In Weekend 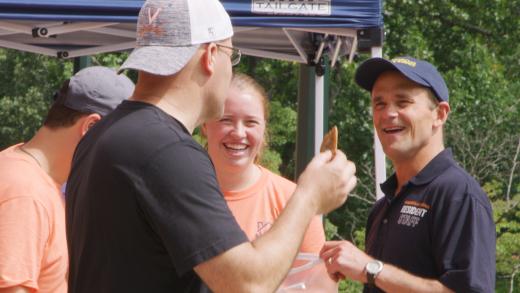 UVA Class of 2023 Greeted by Puppies, President and Cookies 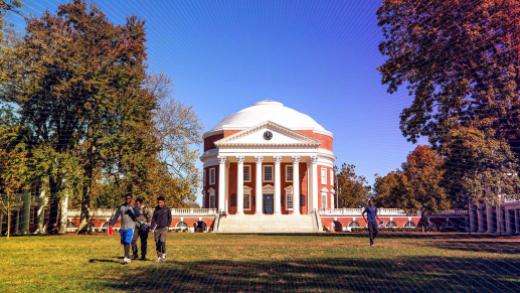