From Cleats to Pleats: How This Soccer-Playing Student Navigated School-Life Balance 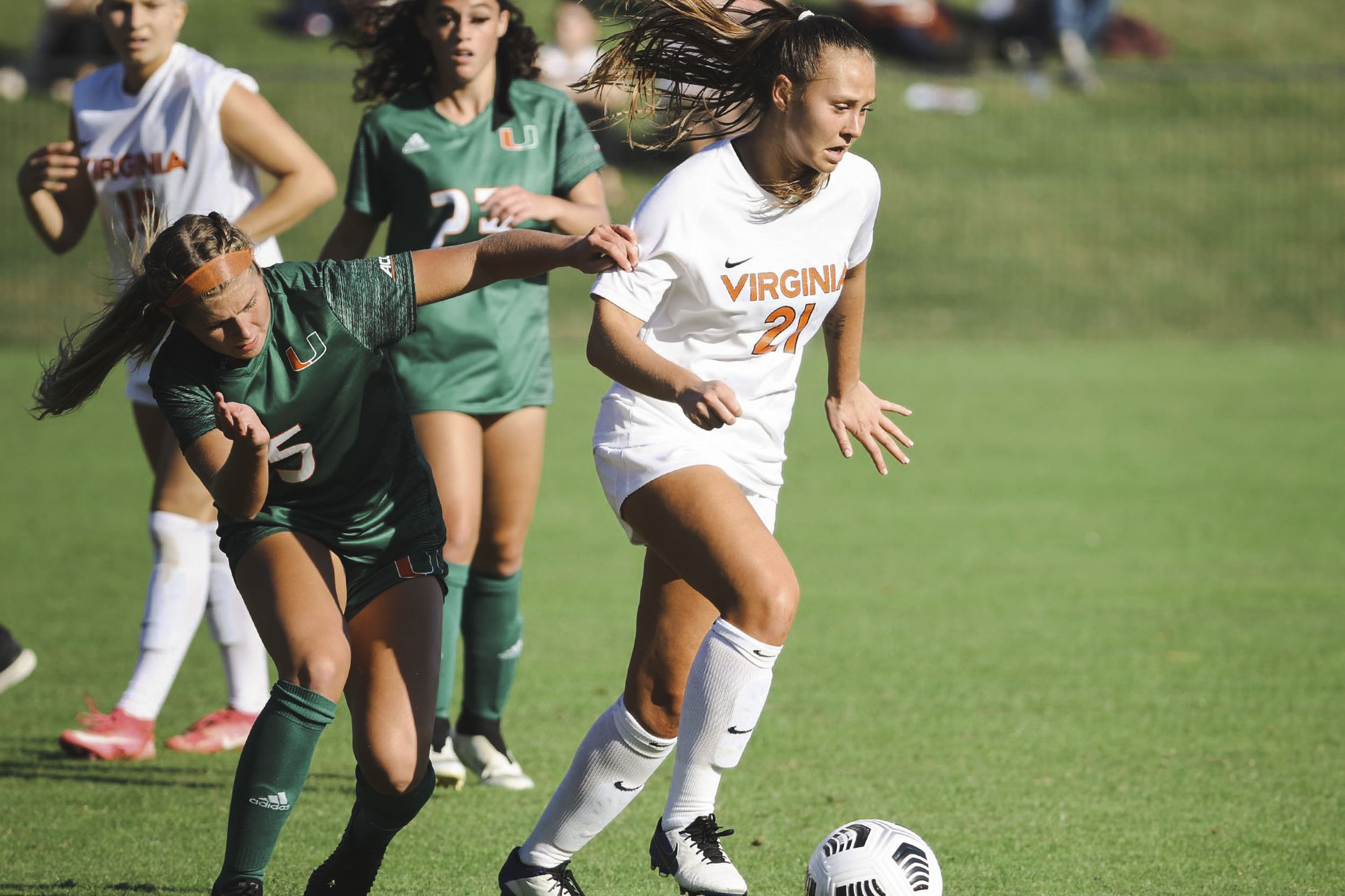 Being a student athlete can have its high and lows – its exhausting moments, as well as its exhilarating highs. For Lauren Hinton, a fourth-year student who played soccer for the University of Virginia while attending the McIntire School of Commerce, that experience gives her perspective that often differs from those of her classmates.

The highs have been fantastic, she said. “For our senior game this year, my comm group from fall 2020 was there to cheer me on. Parents in the stands even commented on how loud they were. They made a sign. It was great.”

But Hinton said playing soccer for the University as a reserve midfielder while studying commerce has provided “the ultimate test of prioritizing and balancing school and athletics,” necessitating a proactive approach to stay atop both athletics and academics.

“As much as procrastination tempts me, I know that I will be overwhelmed if I do not prioritize tasks and make it a point to get them done early,” she said.

Pointing out that as McIntire coursework has a strong focus on team projects, she said it has been imperative that she reaches out to her fellow students regularly.

“When your whole life is dedicated to playing on a team, everyone you meet or work with moving forward becomes part of your team, in a way,” she said.

Hinton said she’s been interested in business ever since she watched her father and great-uncle launch a company that performed background checks, then shifted it into a data-collection enterprise. As the enterprise grew, so did her interest.

That attraction to the world of business took hold, eventually leading the Parker, Texas, native – by then a college soccer player – to apply to transfer to the McIntire School from Florida International University in 2019. The decision felt natural, she said. And despite having to delay graduation by a year to catch up on prerequisite courses, Hinton said she had no regrets. 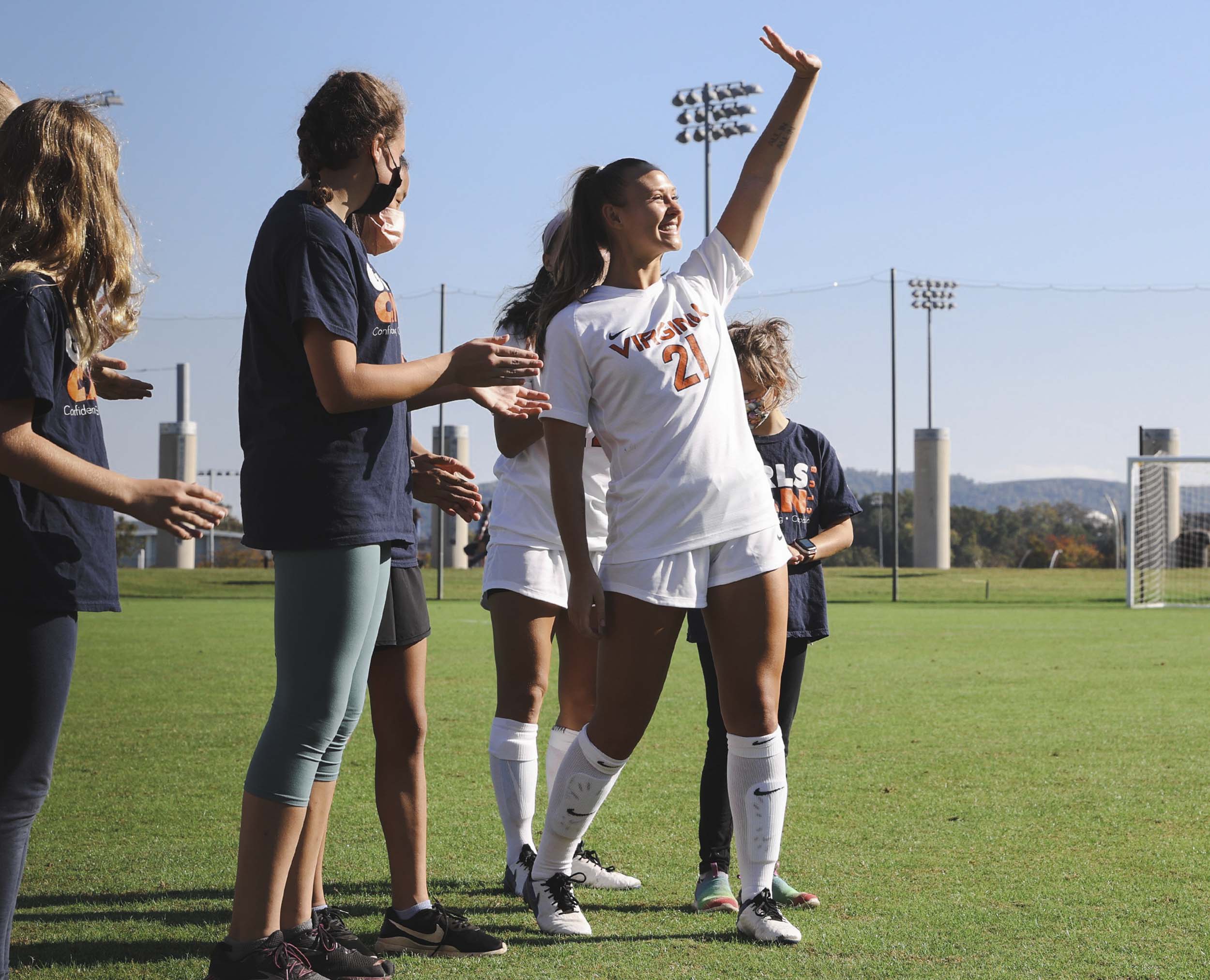 “McIntire has expanded my idea of business, has given me the opportunity to look at it with various lenses and through the experiences of various people I have worked with,” she said. “The professors in particular have helped me meet my academic goals, as well as being a personal resource.”

Hinton lauded the McIntire faculty who have had a positive impact on her experience, with two professors standing out. The first was Peter Maillet, who taught her “Foundations of Global Commerce” course.

“I don’t think I have ever met a more intelligent person,” Hinton said. “Professor Maillet knows just about everything happening in the global economy, and each topic for class got more interesting as the semester went on.”

The second was Jeffrey Leopold, who taught her “Foundations of Commerce” and another course last fall, “Project and Product Management.”

“Professor Leopold made it clear from the start that he wants to be a professional resource for us as well as a teacher,” Hinton said. “His anecdotal teaching style helps to visualize what the real world of business entails and helps make learning the concepts more engaging.”

Getting involved in the real-life business world proved to be the most challenging aspect of Hinton’s academic life. Beyond the balancing act of dividing her time between her sport and her courses, participating in the professional recruiting process was something soccer had kept her from until 2020.

“With a fall sport, we always have to report back to Grounds in early July, so there is no way to hold internships over the summer,” Hinton said.

The pandemic forced changes for many regularly offered internships other times during the year as well. Hinton eventually landed a position as a private wealth intern at AllianceBernstein, an asset management firm.

“Through that process, though, I learned a lot about accepting rejection and figuring out how to best advocate for yourself,” she said. “The whole experience taught me what any athlete should inherently know: When you fail, get back up and keep trying.

“I also learned that there is a lot of added pressure to having an internship or a job – especially if your peers have one – but everything works out how it should if you are willing to put in the work.”

Following graduation in May, Hinton won’t be in the business world just yet, however.

“After graduation, I want to play soccer abroad for a year,” said Hinton, a member of the Cavaliers squad that made it to the Sweet 16 of the NCAA Tournament in November. “I have one year left of eligibility, but playing abroad has always fascinated me. If I were to get an opportunity to do so, I wouldn’t pass it up.”

A member of the Atlantic Coast Conference Academic Honor Roll, Hinton said that she hopes to follow up that stint by returning to AllianceBernstein.

“I know I will get to work in a team environment in some way, so I am excited to see how I can take the skills I have accumulated from playing soccer and attending McIntire and transfer them to the real world. There is so much to look forward to.”

What’s Next for UVA’s Class of 2022? END_OF_DOCUMENT_TOKEN_TO_BE_REPLACED