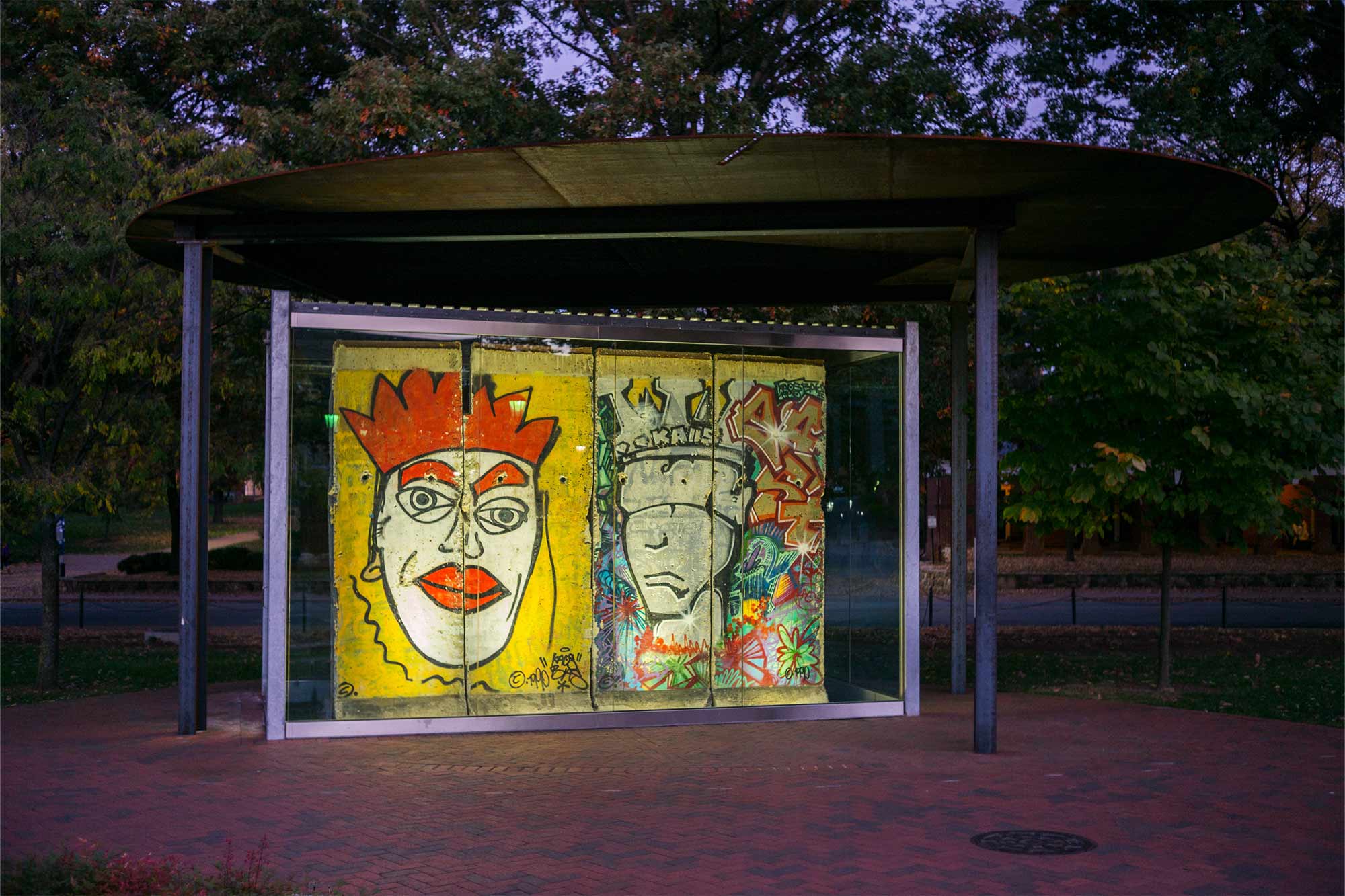 Four panels of the toppled Berlin Wall – a unique piece of Cold War history – are likely standing on Grounds at the University of Virginia for their final year.

Called “Kings of Freedom,” the panels – with graffiti art on one side by West German artist Dennis Kaun – represented the two sides of Berlin when Germany was divided into democratic West Germany and communist East Germany until the collapse of the Soviet Union in 1989. In peaceful protest, people started physically breaking down the Berlin Wall after that. Germany’s unification soon followed.

The panels arrived on Grounds courtesy of art collector and business leader Robert Hefner and his wife, MeiLi Hefner, but were only slated for display for a little over a year. Yet every year since, UVA’s agreement with Hefner has been extended, and the panels have remained in view in a prominent spot along McCormick Road, near Alderman Library.

But according to University officials, it’s likely this is the final year for students and others to see this relic of the Cold War.

“We’re grateful to the Hefners for having these panels here and thrilled to have more opportunities for programming and for the University and community to enjoy them,” Jody Kielbasa, UVA’s vice provost for the arts, said. 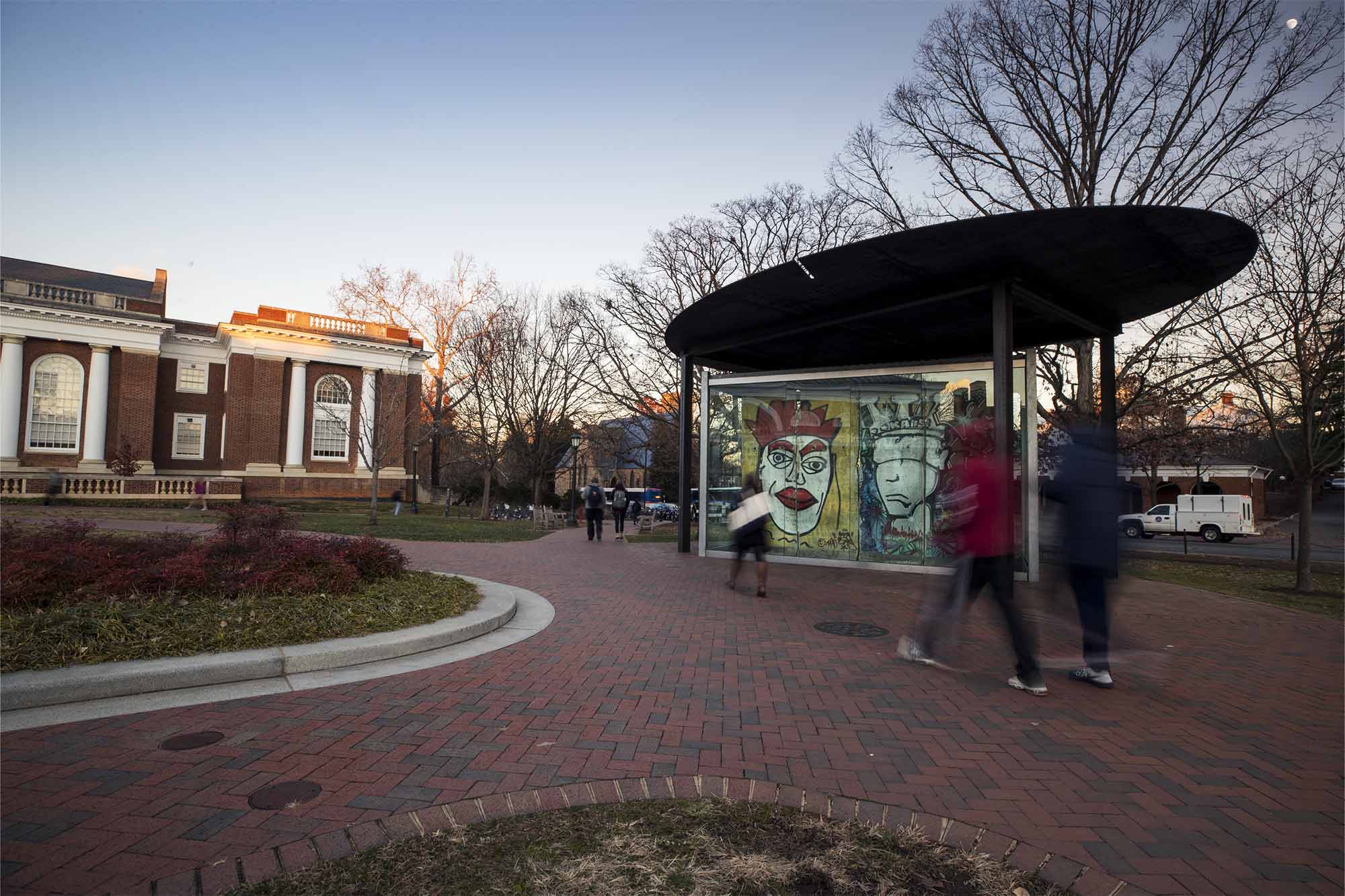 The Berlin Wall panels are a powerful symbol of freedom that pairs well with the permanent Declaration of Independence exhibit in the Albert and Shirley Small Special Collections Library, in the background. (Photo by Sanjay Suchak, University Communications)

The concrete panels are striking in both what is on them and what is not. Kaun’s paintings on what was the western side depict a brightly colored, joyful king representing freedom alongside a frowning, blindfolded king. The side that faced East Germany remained concrete gray, without any artistic adornment.

As the Declaration of Independence symbolizes American freedom, the Berlin Wall panels are another symbol of freedom, Kielbasa said. It made sense to locate them not far from the University’s permanent exhibit about the declaration in the Albert and Shirley Small Special Collections Library, he added.

It was no small task setting up the outdoor exhibit when the “Kings of Freedom” panels arrived on Grounds on the occasion of the 25th anniversary of the Berlin Wall’s toppling, Kielbasa remembered.

Measuring 16 feet long and 12 feet high, the sections weigh 8,818 pounds. UVA’s Facilities Management employees designed and built a glass and steel structure to house the panels, including lights that give the display a dramatic view at night.

The University was planning to return the panels this summer to Hefner and his wife MeiLi, founders of the Oklahoma City-based Robert & MeiLi Hefner Foundation and The Hefner Collection, but the couple agreed to let them stay another year. It’s likely the last extension, according to University building official Ben Hays.

Over the years, UVA departments and faculty have organized programs highlighting Cold War history. In addition to a ceremony when the panels were installed, the University celebrated the 30th anniversary of the fall of the Berlin Wall with a semester’s worth of events in 2019.

Monkeypox Is Spreading, But University’s Risk Believed To Be Low END_OF_DOCUMENT_TOKEN_TO_BE_REPLACED

Q&A: Assessing the Risks and Rewards of Pelosi’s Plan to Visit Taiwan END_OF_DOCUMENT_TOKEN_TO_BE_REPLACED

These Giant Wind Turbines, Inspired by Palm Trees, May Be the Future of Renewable Energy END_OF_DOCUMENT_TOKEN_TO_BE_REPLACED