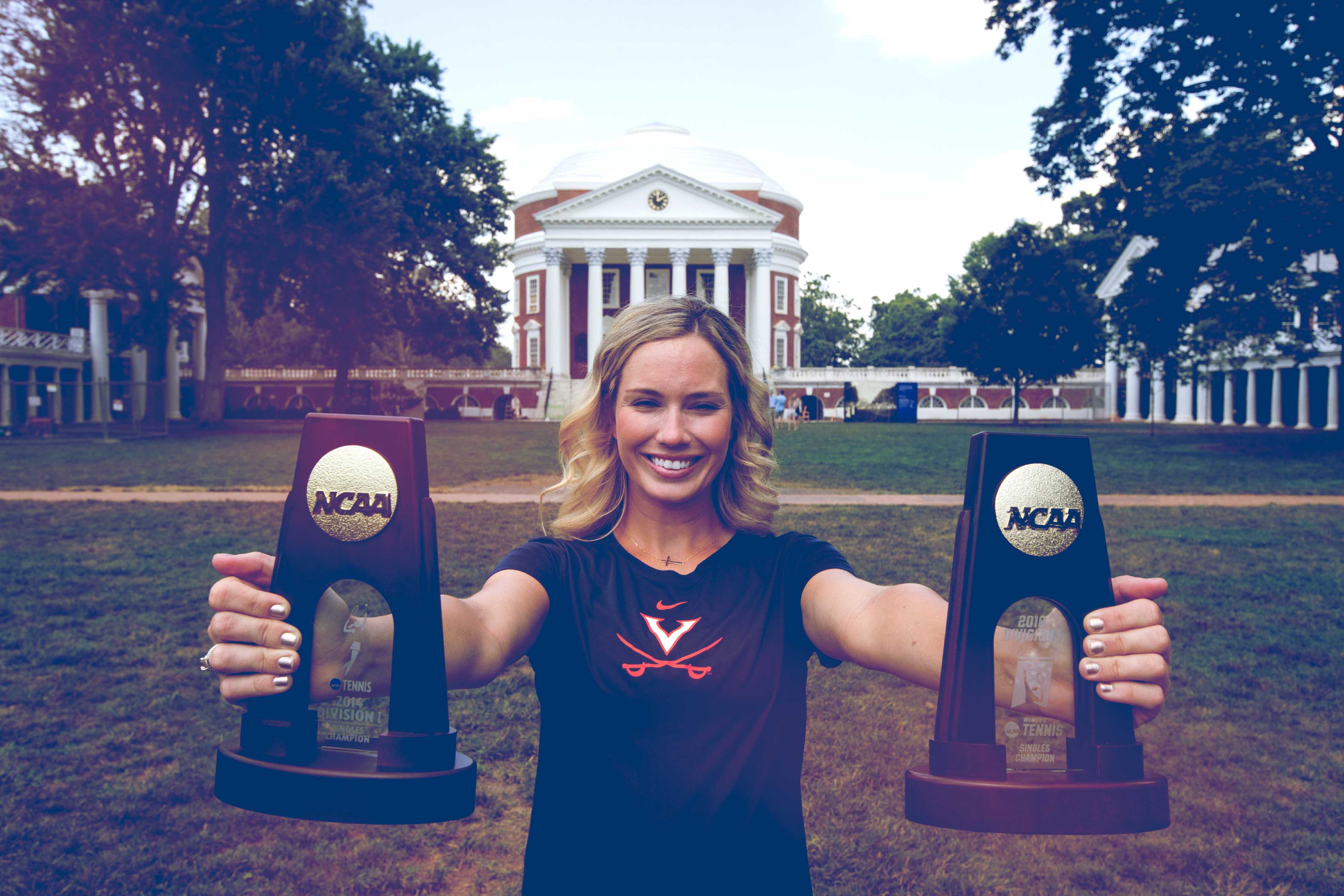 After a long day of travel that started in Oklahoma and included a layover in Charlotte, North Carolina, Danielle Collins finally made it back to her Charlottesville residence early Wednesday morning.

As she had in 2014, the University of Virginia tennis star returned to town with a championship trophy in tow.

In her final match as a Cavalier, Collins knocked off top-seeded Hayley Carter of the University of North Carolina-Chapel Hill, 6-2, 6-3 on Monday to capture the NCAA singles title at the Case Tennis Center in Tulsa.

“It was definitely the perfect exit,” said Collins, the tournament’s No. 2 seed. “I hate losing so much. I just did not want to go out of my college career losing my last match.”

Two years earlier, in Athens, Georgia, Collins had become the first women’s player from UVA to win an NCAA singles championship, beating the University of California-Berkeley’s Lynn Chi for the crown.

Only six other women have won two NCAA singles titles. Collins, who’s from St. Petersburg, Florida, is one of only two – the other is former Stanford University great Sandra Birch, who won in 1989 and ‘91 – to triumph in non-consecutive years.

Collins’ latest feat capped a spectacular senior year in which she won three national singles championships: the Oracle/Intercollegiate Tennis Association Masters in September, the Riviera/ITA All-American in October, and the NCAA this week.

She finished her college career with a singles record of 125-28. She was 24-8 at the University of Florida in her freshman year, after which she transferred to UVA, where she went 101-20.

Asked Wednesday about having reached such heights, Collins said, “I haven’t really thought about it that much, honestly, because we’ve had so much going on the past couple days. But, yeah, it’s a huge accomplishment, and luckily I was determined and told myself to work really hard and pushed myself and had a good group of coaches who pushed me.”

The unwavering support she’s received throughout her tennis career – from her coaches, her father and many others – “accumulates over time,” Collins said, “and eventually all of that hard work pays off.”

Collins, 22, who traveled back to Charlottesville with associate head coach Troy Porco, is a media studies major at UVA. She needs two courses to graduate, and she’ll take them in the second session of summer school, which starts June 13. But she has another task to complete first.

“I am so overwhelmed right now with [congratulatory] texts and phone calls, and then texts and phone calls that went to the coaches,” Collins said. “So we’re trying to make sure we get back to everybody and thank everyone, because obviously it’s so nice and such a good feeling to know that people are watching and supporting you. People have said some really sweet and caring things, and hopefully we can get back to everybody and thank everyone for being so supportive.”

In 2014, Collins helped Virginia, whose other standouts included her classmates Julia Elbaba and Stephanie Nauta, advance to the NCAA quarterfinals for the first time in program history. The Wahoos’ 2015 postseason run ended in the Sweet Sixteen, but last month they upset third-seeded North Carolina 4-2 to get back to the quarterfinals, where they fell 4-2 to Vanderbilt University.

“That was a huge accomplishment as a team, but obviously we wanted to get a little bit further,” Collins said. “So it was a sad ending, but there was a lot to be proud of. And I knew I was playing really good tennis and had a good chance to do well in the individual tournament.”

As a junior, in the NCAA singles quarterfinals, Collins lost in three sets to eventual champion Jamie Loeb of North Carolina. As a senior, Collins could not have been much more dominant. She did not drop a set in any of her six matches.

“She can generate pace and she can handle pace,” Guilbeau said. “Those two skills give you a chance every single day.”

After she completes work on her bachelor’s degree, Collins plans to turn pro this summer. As NCAA singles champion, she’s also expected to receive a wild-card invitation to the main draw of the U.S. Open, as she did in 2014.

That summer, Collins took second-seeded Simona Halep to three sets before losing in the Open’s first round in Flushing, N.Y.

“That’s a huge confidence-booster,” Collins said. “Not a lot of people are able to do that. So I’m really looking forward to being able to start my professional career and see what it has in store for me.”

Collins remains close with several of her former Florida teammates, including her best friend, Olivia Janowicz, who in April traveled to Charlottesville for the Cavaliers’ Senior Day at the Snyder Tennis Center.

Still, Collins said, she has no regrets about leaving Gainesville.

“It worked out for the best for me,” she said. “I have had the best three years here – not just from a tennis standpoint, but academically. To be able to go to one of the most prestigious universities in the country and to get this type of education and have it all paid for, I’ve been so fortunate, and I’m really happy that I made the decision to transfer.

“I also needed coaches that were more hands-on with me, and Mark and Troy have been more than great. They’ve always pushed me to be the best and to always reach for a higher level. I’m just very happy that I’m here and made the decision to come here.”

When Collins arrived at Virginia, Guilbeau said, he might not have predicted she’d win two NCAA singles titles, but “honestly, I knew she had the ability with good effort and training to win at the highest level.”

At 5-foot-9, Collins is a commanding presence on the court. As impressive as her physical skills, though, is her mental approach.

“She basically has a killer instinct before the tournament starts, which is what you really want,” Guilbeau said. “She prepares herself for those tough moments beforehand and has a very strong tolerance for those moments when they occur.”

Collins said: “I try to be all business. This is what I want to do for a living, and I take it really seriously.”

Since coming to college, Collins said, she’s spent countless hours “not only trying to get stronger physically – that was one of my goals, and that’s something that I’m always chipping away at – but mentally, too. There’s been a lot of effort put in there, too, and I’ve been fortunate to have the opportunity to work with Dr. Freeman.”

Jason Freeman, UVA’s sports psychologist, “really helped with giving me different tactics and ways to think about things when I go on the court, and it really gets me prepared,” Collins said. “I think that’s probably been the biggest factor that’s helped my tennis: becoming mentally stronger and being able to deal with tough situations and not be too riled up about it.”

Collins spent about two weeks in Tulsa before leaving Tuesday. That’s a long time to be in an unfamiliar city, but in this case she didn’t mind.

“It was nice this year,” Collins said, “because my family is from Oklahoma. So I think at one point 15 of my cousins were there. We had a pretty big crew.”

One of her cousins, in fact, stayed with Collins for much of the tournament. Collins’ parents watched her matches online, but did not make the trip to Tulsa.

Her father, Walter, owns a landscaping business in Florida.

“He’s 78 and still working. Somebody’s got to pay the bills,” Collins said, smiling. “Fortunately he loves me enough to do that for me. Hopefully, if I can start making some money, maybe I can put my dad into retirement and start taking care of him.”

“I don’t want to put a number on it,” he said, “but I think Danielle has a chance to be one of the best players in the world.”

What Is the ‘4th Side’? END_OF_DOCUMENT_TOKEN_TO_BE_REPLACED