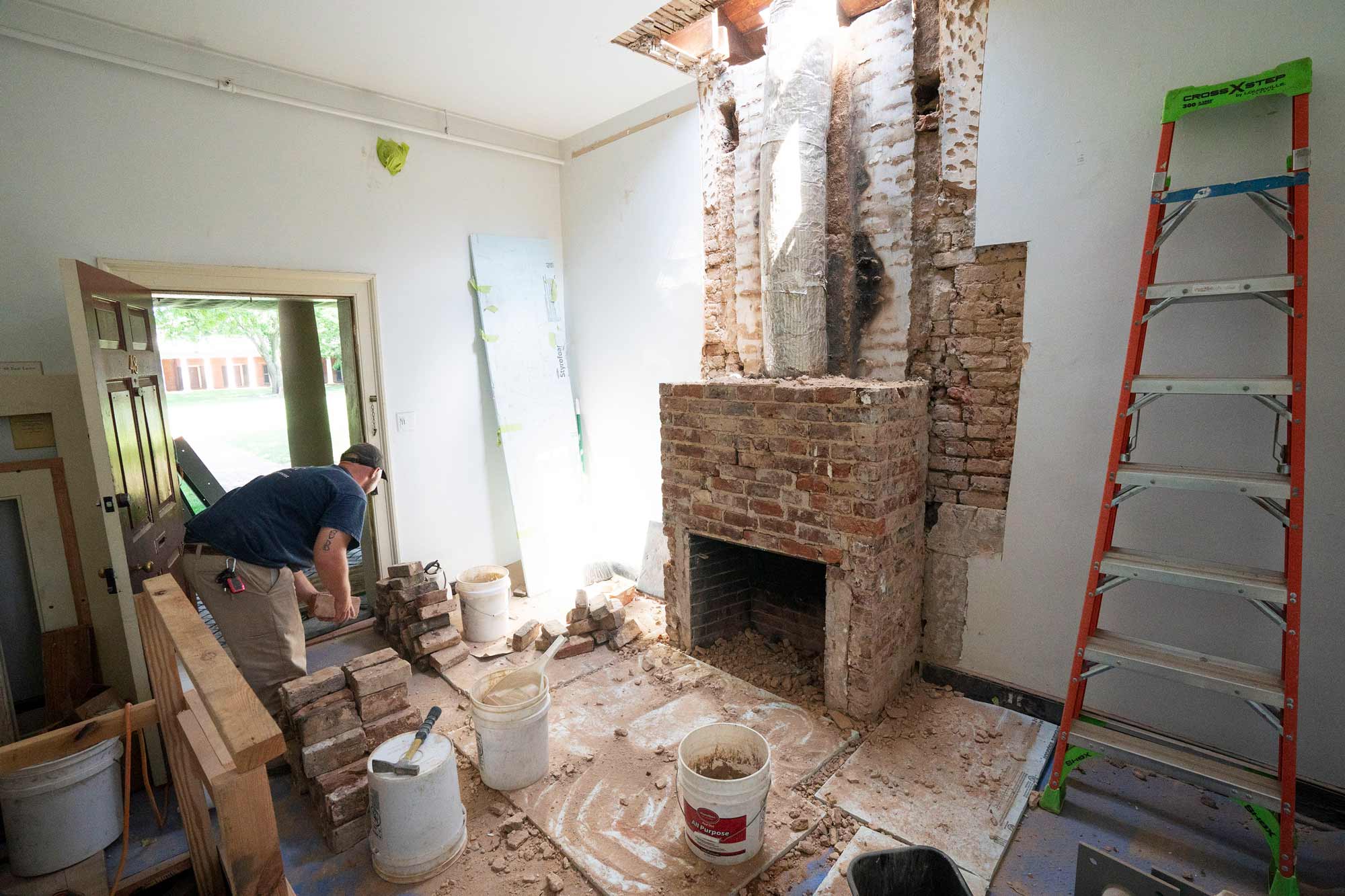 Mason Tim Shifflett prepares to lay the brick apron in front of the fireplace in Lawn Room 50. (Photo by Dan Addison, University Communications)

For the first time in 146 years, Room 50 on the University of Virginia’s historic Lawn will soon have a functioning fireplace.

University workers are restoring Lawn rooms 48 and 50 to their original configurations, with fireplaces sharing a common chimney. These are the only two rooms on different elevations of the Lawn terraces that share a chimney.

To accurately recreate the original spaces and features, University architects and workers had to take a deep dive into the history of the rooms and the people who lived there – a history drawn both from archival records and “ghost marks” of previous architectural modifications. 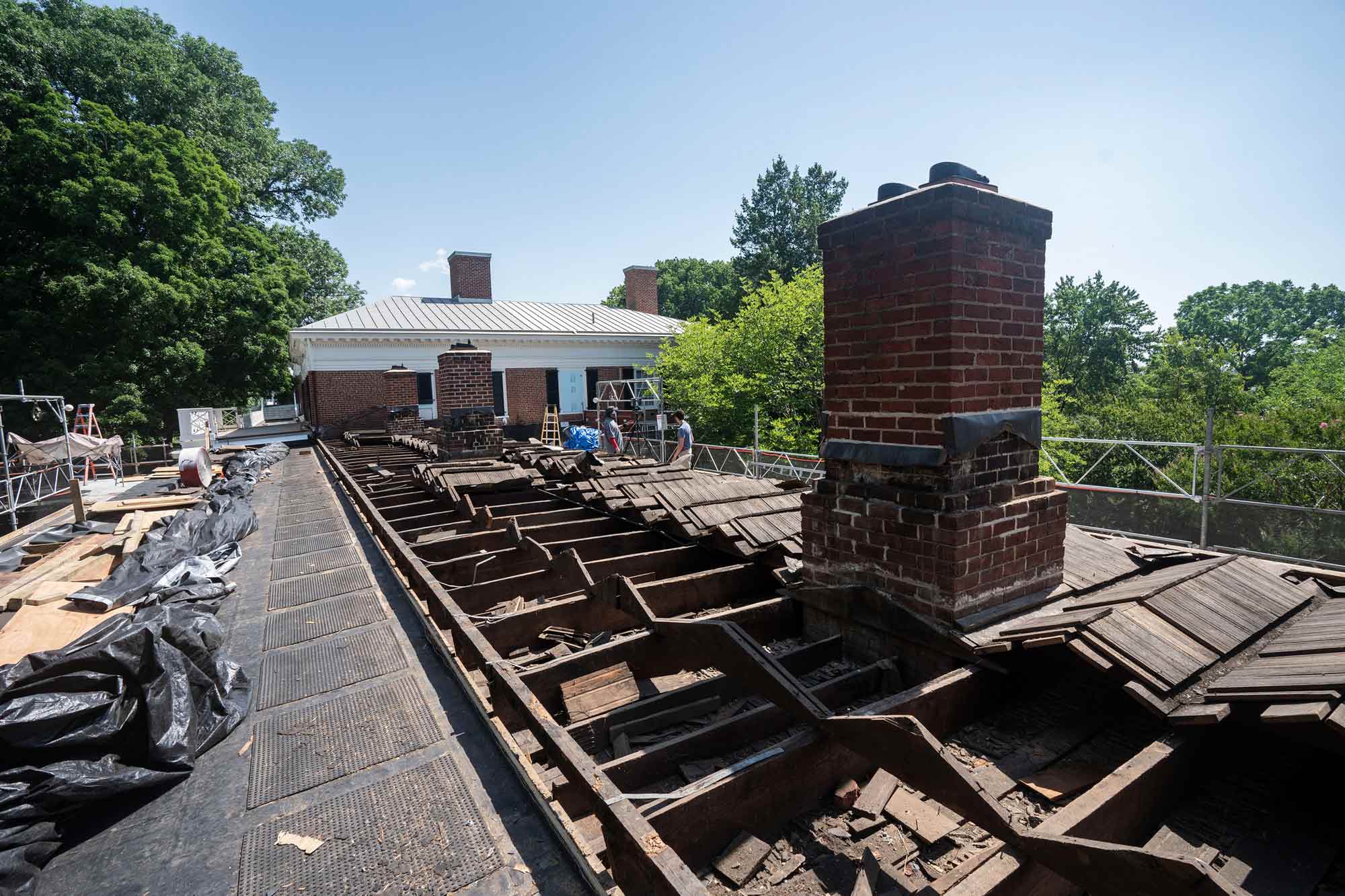 The story starts as early as 1837, when a professor wanted more space for himself. A series of Pavilion X expansions eventually swallowed several student rooms, including Rooms 46, 48 and 50. These expansions sacrificed the fireplace and chimney that once served both 48 and 50, and resulted in the construction of a new chimney and fireplace in Room 48, on the opposite wall from where it had originally been.

Expanding pavilions into student rooms was not uncommon in the University’s early years. Over decades, pavilion residents, hotel keepers and professors regularly annexed student rooms to give themselves more living and working space. Floors were lowered, then raised. Doors were cut through walls. Student rooms were converted to pavilion restrooms and, more recently, into accessible restrooms.

But for a University so steeped in history, there were more than a few gaps in the historical records of these Lawn rooms and the many renovations they underwent. It fell to James Zehmer, Senior Historic Preservation Project Manager of the chimney reconstruction in UVA’s Department of Facilities Management, to sort it all out.

To return the rooms to their original layout, Zehmer first had to understand how they had evolved and why. He compared records from University archives with evidence uncovered when the rooms were dismantled for renovation. He relied on the historic structures report prepared by Mesick, Cohen, Wilson and Baker Architects, in Albany, New York, and Williamsburg. And he worked with floor plans from the different stages of encroachment, many of which came from the Law School archive, since Pavilion X was the home of the professor of law and the law classes for 130 years.

As early as 1837, the Board of Visitors granted permission to law professor John A.G. Davis - who later was shot to death by a masked student on the Lawn in 1840 - to use Lawn rooms 50 and 52 for his purposes.

“By 1839, [Davis] is paying rent on those rooms, so we know he has both rooms,” Zehmer said. “And they would stay part of the pavilion throughout that second pavilion plan, until 1847.”

Zehmer said it was common for professors back then to request more space because the pavilions themselves had relatively small footprints. A first floor was generally a classroom and a dining room. Upstairs was typically a parlor and two living spaces. For professors with families, space was tight. 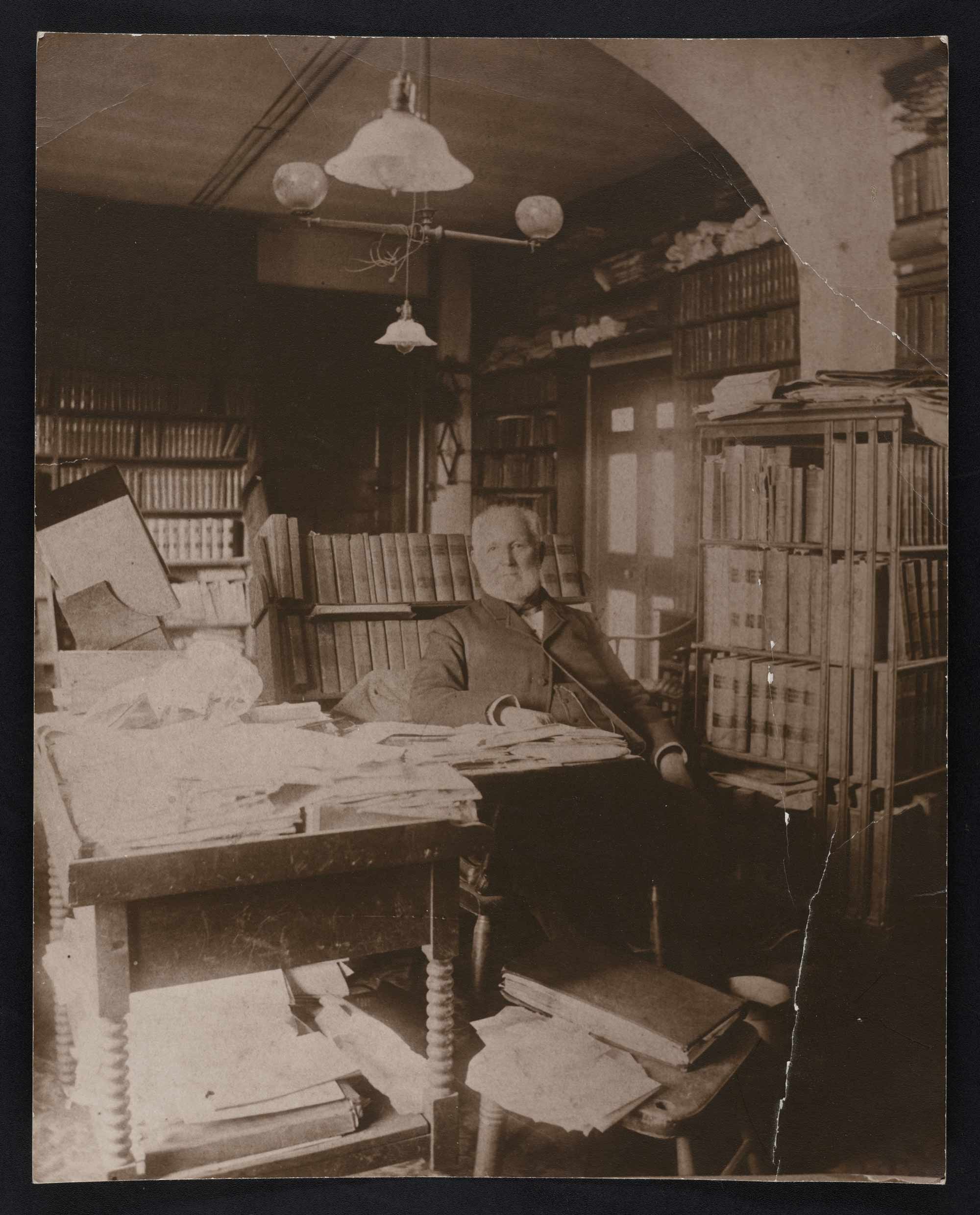 John Minor in his office on the lowered floor of Room 48 looking into Room 50. The door of Room 50 onto the Lawn had been glazed to let in daylight. Behind Minor is the door into Pavilion X. (Contributed photo)

Law professor John Barbee Minor took over the pavilion in 1845 and lived there for the next 50 years.

Two years after he moved in, Minor gained permission to knock holes through the walls of Pavilion X and install doors directly into the student rooms, according to Zehmer. It appears the student rooms were converted to office space, and Room 52 became a pantry.

In 1876, Minor again petitioned to build onto the rear of the pavilion. While the Board of Visitors agreed, it needed time to raise the money. In the meantime, the board gave Minor permission to expand into rooms 48 and 46, north of Pavilion X, one terrace up.

“The physical evidence shows us that in rooms 48 and 46, the floors were lowered roughly five feet so they were on the same plane as Pavilion X,” Zehmer said. “Rooms 50 and 48 became one big room at a lowered elevation. A doorway was cut in the wall in what we now consider the cellar space between rooms 48 and 46.  So you had all three rooms on the same elevation as Pavilion X.”

Minor died in 1895 and was succeeded as law professor by William Lile, who took over the pavilion and connected rooms. At that time, rooms 46, 48, 50 and 52 were considered part of Pavilion X.

Eventually, the University began taking back the rooms for students, starting with Room 46.

“Room 46 shows occupancy from 1903 to 1906, of a Mr. M.P. Robinson and then a T.B. Gay,” Zehmer said. “Both were in the Law School. My theory is that for several years they actually used Room 46 as a dorm room in its lowered state, getting special permission from the law professor.”

After the two law students residencies, Room 46 remained sunken and unused, but then the student directory shows continuous student use of Room 46 starting in 1920. 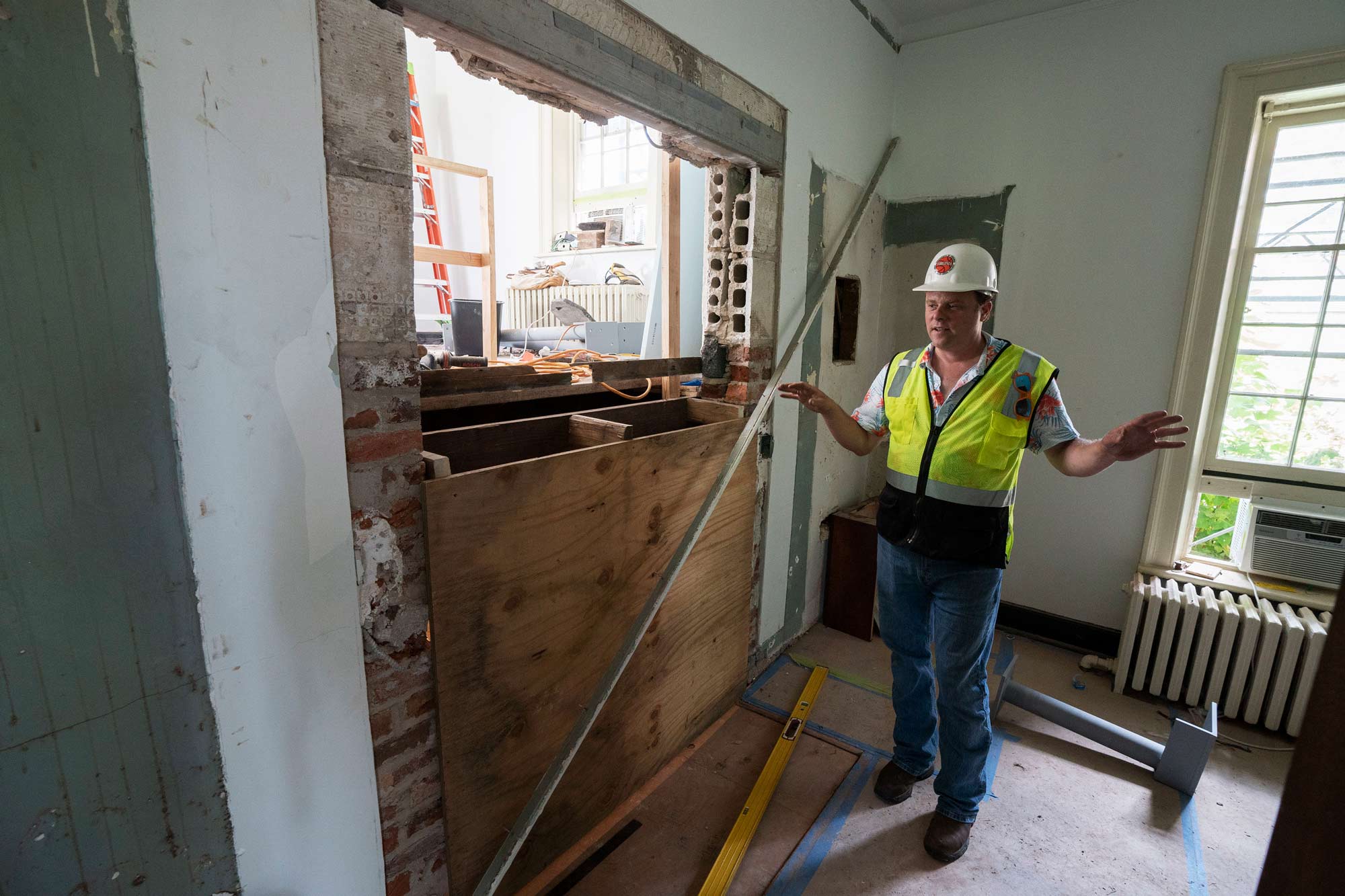 “I think there is enough evidence to argue that Room 46 was raised in 1920, based on the student directory,” Zehmer said. “The floor plan indicates the floor of Room 48 was back up in 1936, returning it to student use. That is also the year that rooms 50 and 52 were returned back to student use.”

Lyle died in December 1935. The student directory shows continuous use for those three rooms as student rooms starting in 1936.  This makes sense, as the change in tenancy of the pavilion allowed the University to return these rooms to student use.

But while the rooms were restored to student use, Room 50 still did not have a chimney or a fireplace. Steam radiators heated the room, and because the room stayed warm, there’s no evidence anyone complained.

Kimball Winn, a 1978 economics graduate who lived in Room 50, did not miss the chimney.

“It's hard to miss something you never had,” he said. “I was just grateful to have any room on the Lawn. I certainly wasn't going to feel bad for not having a fireplace. The upside is that the room had slightly more floor space without the fireplace and hearth.”

While Winn did not mind, some of his friends felt sorry that he lacked a fireplace and sought to provide it.

“One weekend while I was away, some friends, one of whom was a former Lawnie, somehow got into my room and ‘installed’ a fireplace of cardboard and construction paper, among other mischief,” he said. “Evidently some others think it’s not a proper Lawn room without a fireplace.”

As part of an ongoing effort to restore the flat roofs and correct Jeffersonian railings to the Lawn, the current project provided an opportunity to rebuild the chimney in its original location.  And now, 146 years after the fireplace was removed, Room 50 will finally have one again.

What’s the True Story of Brooks Hall? This Architectural Historian Has the Answer END_OF_DOCUMENT_TOKEN_TO_BE_REPLACED

At UVA, There Is a Club for Everyone END_OF_DOCUMENT_TOKEN_TO_BE_REPLACED