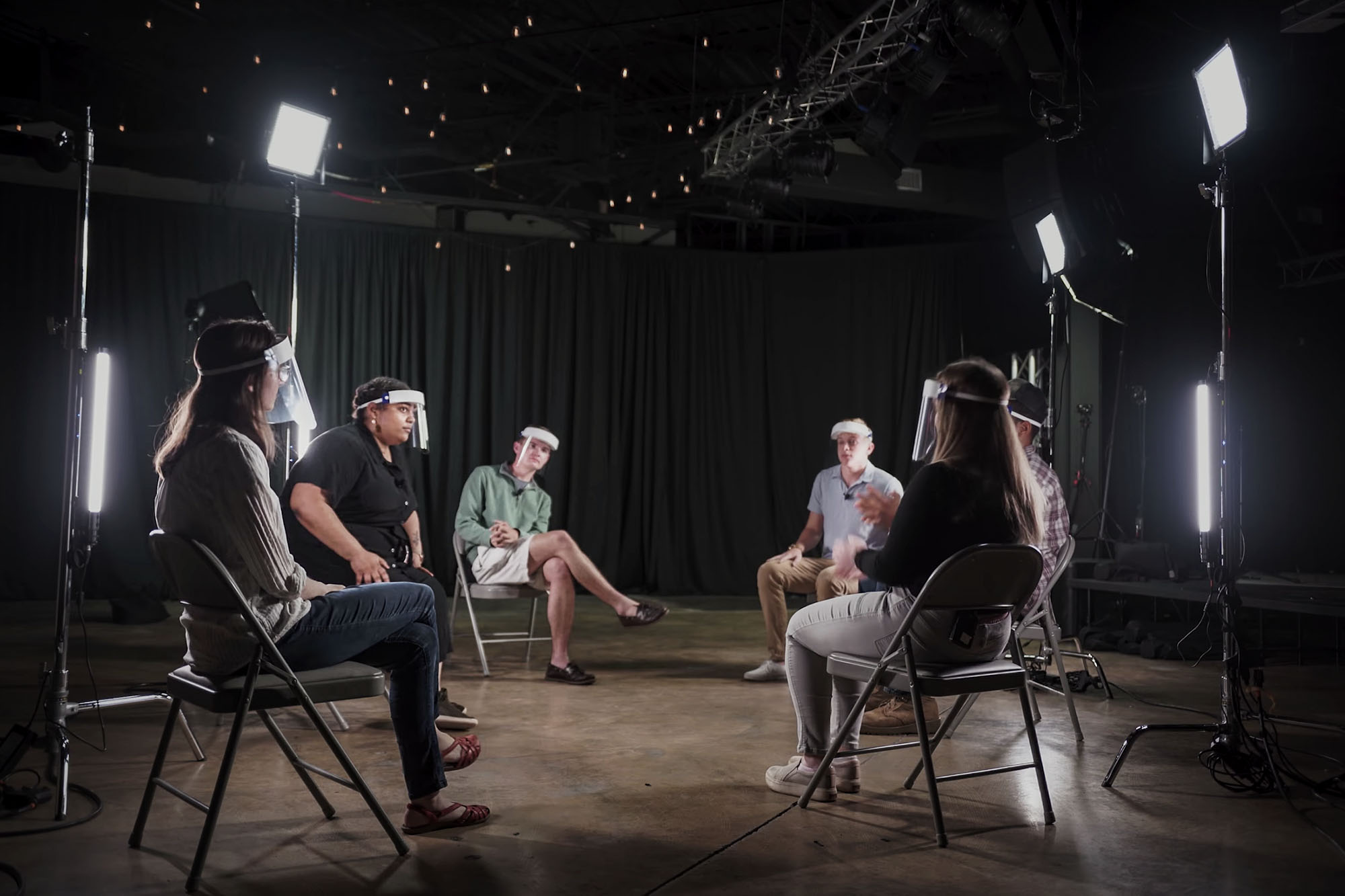 Center for Politics student interns are premiering the documentary film they made to bring together their peers to bridge political divides in discussion and paint Beta Bridge. (Contributed photo)

Even though the political color of Virginia’s executive leaders switched from blue to red in last week’s statewide elections, the political arena was just as divided as last year when Democrat Joe Biden won the White House and after the Jan. 6 insurrection at the Capitol.

That’s when a group of five University of Virginia students interning at the Center for Politics came up with the idea of making a documentary film to see if they could encourage their peers to bridge political divides.

“We started the semester in a tense national political climate,” said fourth-year foreign affairs student Raed Gilliam, who directed the group’s film project, “Common Grounds,” that is culminating in the documentary’s premiere Thursday.

The students started the spring 2021 semester enrolled in center associate director Ken Stroupe’s internship course without being able to do a lot of in-person activities due to the pandemic, so they brainstormed other possibilities.

“Our idea was to have people do individual interviews, sharing their honest opinions on free speech, civility, ‘cancel culture’ and similar topics, and then get them together in a group to see if they could talk it out and have a good conversation,” Gilliam told UVA Today earlier this year, after students painted Beta Bridge with a message, “There is common ground on our Grounds.”

“The interns that are chosen to work for the programs area of the Center for Politics are usually able to work on something they already feel passionate about,” said Glenn Crossman, the center’s director of programs, who supervised the students. Projects in the past have included outreach to public and private schools, and daylong programs hosted on Grounds, such as voter registration and other education programs.

The free premiere event will be held in-person and virtually Thursday at 7 p.m. in the Rotunda Dome Room. Masks are required for in-person attendance. Afterward, the filmmakers will discuss their project. Registration is required.

The 30-minute documentary includes individual interviews with students of widely differing political beliefs; a small-group discussion bringing six of those students together; and the scene at Beta Bridge that became a kind of “grand finale,” an idea sparked by students in the film to bring together those who participated.

Click here to view the trailer (which starts with footage from the August 2017 Unite the Right riots, when white supremacist groups descended on UVA and Charlottesville).

UVA Today checked in with the interns, who answered a few questions via email. In addition to Gilliam, who describes himself as a centrist politically, the interns are Molly Hayes, who calls herself a progressive and assisted in directing the documentary; Thomas Driscoll, a moderate Democrat who worked on social media; Sean Piwowar, a government major who worked on production and describes himself as a conservative Republican; and Miranda Hirts, who describes herself as liberal and also worked on production as well as the Common Grounds Challenge, the next phase of the project.

Said Driscoll, also a participant: “I hope viewers will come out with a sense of hope about the future of our country in spite of its present challenges.”

Q. How do you think the documentary turned out?

Gilliam: It really came together! We were really able to get a feel for where students were at when it comes to a whole range of issues. … Whether it was contrasting different students’ opinions in individual interviews or the group dialogue, people will come away from this with a better idea of the range of opinions, backgrounds and perspectives that college students have.

The filming and editing was finished before the elections were really a major issue for most students. However, with the release of the documentary coming little over a week after the state government elections, it could definitely influence the reception this film gets. How so, I’m not entirely sure, but it will be interesting to see people’s reactions to the film and how much it has to do with the state of local politics.

Piwowar: I was so thrilled with our participants’ openness and honesty; it’s intimidating to say your unfiltered political beliefs to strangers, let alone to do that on camera. The whole project hinged on finding people from a range of perspectives who were excited to share their opinions, and fortunately we found them.

Q. And the project’s goal, to get people to talk about their different views – how did that work out?

Driscoll: While the filmmakers could have easily picked a group of participants who were relatively close to one another on the political spectrum or with whom they were friends, they instead selected the most politically active and vocal people on Grounds. To illustrate this point, we literally had the presidents of both YAF [Young Americans for Freedom, described on its website as “advancing the conservative movement on Grounds”] and YDSA [Young Democratic Socialists of America, whose website stresses learning to “be empowered to fight against the most pressing social justice issues impacting our communities”] – the two most diametrically opposed political clubs on Grounds – participate. As a result, simply having a civil conversation was by no means guaranteed, and yet this is precisely what ended up happening.

Gilliam: People definitely didn’t hold back. Some students were diplomatic and maybe chose their words carefully, but the difference in views was evident for all to see – even in the in-person group discussion. There was also a real uniqueness to a lot of people’s answers. We tend to make a lot of assumptions about people based on what they post on social media or how they look, but people are a whole lot more complex than a label!

Hirts: We got people to openly talk about their views, but I am not sure we were successful in changing anyone’s mind. I think that we did expose participants to opinions that they might not have otherwise considered, so in that regard we were successful.

In terms of the climate now, I believe it is still just as polarized and tense as ever. Trump holds lots of influence over big and small-scale elections.

What brought people together, or made them feel togetherness?

Hirts: I think that realizing that even though they all had different beliefs or opinions, they had things in common, too. Many shared a liking for the same TV shows or music, and finding that commonality brought people together.

Hayes: I think humor was the thing that I most saw bring the participants together. Whether it be humor at the dysfunction that arose from setting up camera equipment, or humor related to everyday UVA happenings, it allowed the participants to have a point of shared experience.

Piwowar: I think the sheer fact of being physically together, in the same room, in the middle of the pandemic, actually played an enormous role in creating a sense of togetherness. So much division is manifested online, where we are physically apart from one another and don’t experience the fullness of human interaction, and it makes debates nasty and unproductive.

Q. What was the most surprising thing that came out of the discussions?

Gilliam: The level of respect, friendliness and almost a sense of camaraderie was definitely surprising. Several of these students are the heads of some of the most vocal political groups on Grounds, and yet they couldn’t have been more poised and respectful to each other, across some radical differences.

Hayes: For me, the most surprising thing that came out of the discussion was the way in which participants interacted with each other off camera. Of course, there was tension and hesitation, but on a human level it seemed that the participants were enjoying the company of the other participants.

Driscoll: Everyone featured in the film was very vocal about their opinions, but when it came time to actually sit down together in a room, they were all gracious and respectful toward one another. For me, being a part of that conversation and speaking with people who I very strongly disagree with was incredibly rewarding. I honestly did not expect for the conversation to be quite nearly as civil and substantive as it ended up becoming, and it honestly gave me a sense of hope about the future of politics in our country.

Q. How do you compare the political climate then and now?

Driscoll: I would argue that the 2020 presidential election and indeed the entire Trump presidency really defined the political climate on Grounds, both when we were filming as well as now.

When watching the film, it’s important for viewers to remember the fact that Charlottesville was the site of unspeakable violence just four short years ago. The Unite the Right rally was truly a watershed moment for our country, and yet for those of us who worked on and participated in this project, it was – and still remains – deeply personal. Charlottesville is our home and to have something like this happen here has really had a deep and lasting impact on the way in which we look at the world and, by extension, form our own political perspectives. To have students from across the political spectrum sit down together while the memory of Unite the Right remains so visible fresh really speaks, in my mind, to so much of the significance behind this project.

Piwowar: The filming was all done before the state elections, but I think the state elections are a new link in a chain of other events (which we briefly touch on in the film) that affected the climate at UVA and therefore the experiences of our participants. The tense political climate in this country is unfortunately something we are going to have to deal with for a while, which is why we tried to do something about it in making this film.

Q. What comes next?

Hirts: We are soon launching the “Common Grounds Campus Challenge.” We will be encouraging other schools and universities from around the country to do what we did: bring together students of varying political backgrounds and beliefs and engage in a conversation covering an array of topics.

Driscoll: This campaign will encourage high school and college students from across the country to come together and try to find common ground themselves. We believe that this campaign will be especially relevant given the enormous amount of attention that politics in schools and on campuses has received. While the premiere is coming up this week, our work promoting political dialogue amongst young people has only just started.