Continuing Ed Degree Has Emergency Responder Fired Up About His Future 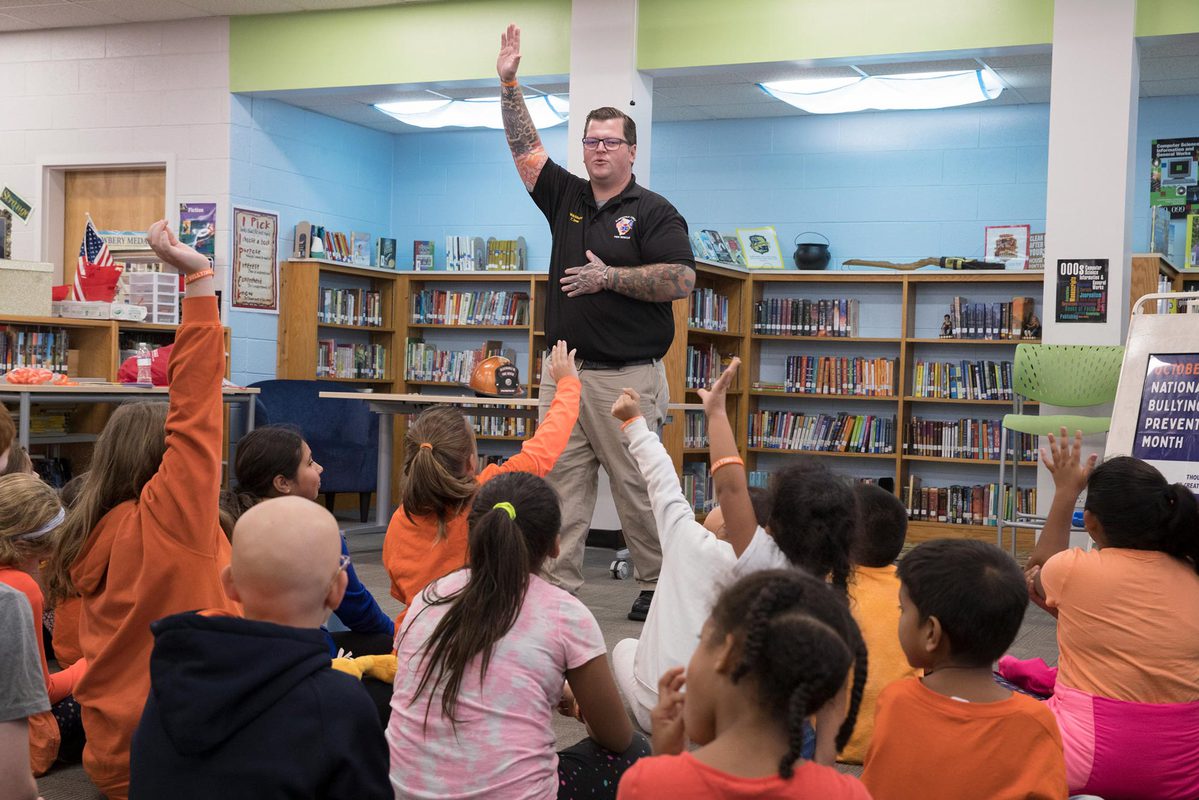 It was like a Cavalier pep rally – excited students dressed in orange, clustered together, laughing loudly and waving their hands in the air. But instead of a sports team, they were elementary students focused on firefighter Tyler Dean, a public educator with Albemarle County’s Department of Fire Rescue, who was talking to them about bullying.

Dean instructed about 50 students clustered in the library at Paul H. Cale Elementary School on Unity Day, an anti-bullying effort symbolized by orange garments. Most of the students wore orange (much of it with University of Virginia logos). Cale principal Cyndi Wells wore an orange shirt and an orange wig.

“I figured if I was going to wear orange, I might as well go all out,” Wells said.

In contrast, the bespectacled Dean wore no orange. He was adorned in his standard uniform of khaki trousers and a black polo shirt that exposed his heavily tattooed arms, decorated in an “Alice in Wonderland theme” (“I fell into some paint markers the other day,” he told the students as a way of explaining the body art.).

Dean gets the students warmed up by having them clap their hands over their heads and then stand on one leg. The father of three clearly relishes working with his young audience. Dean also came with backup, about 10 firefighters and police officers who hovered around the outskirts of the room. He pointed them out to the students, telling the youngsters they could trust the officers. 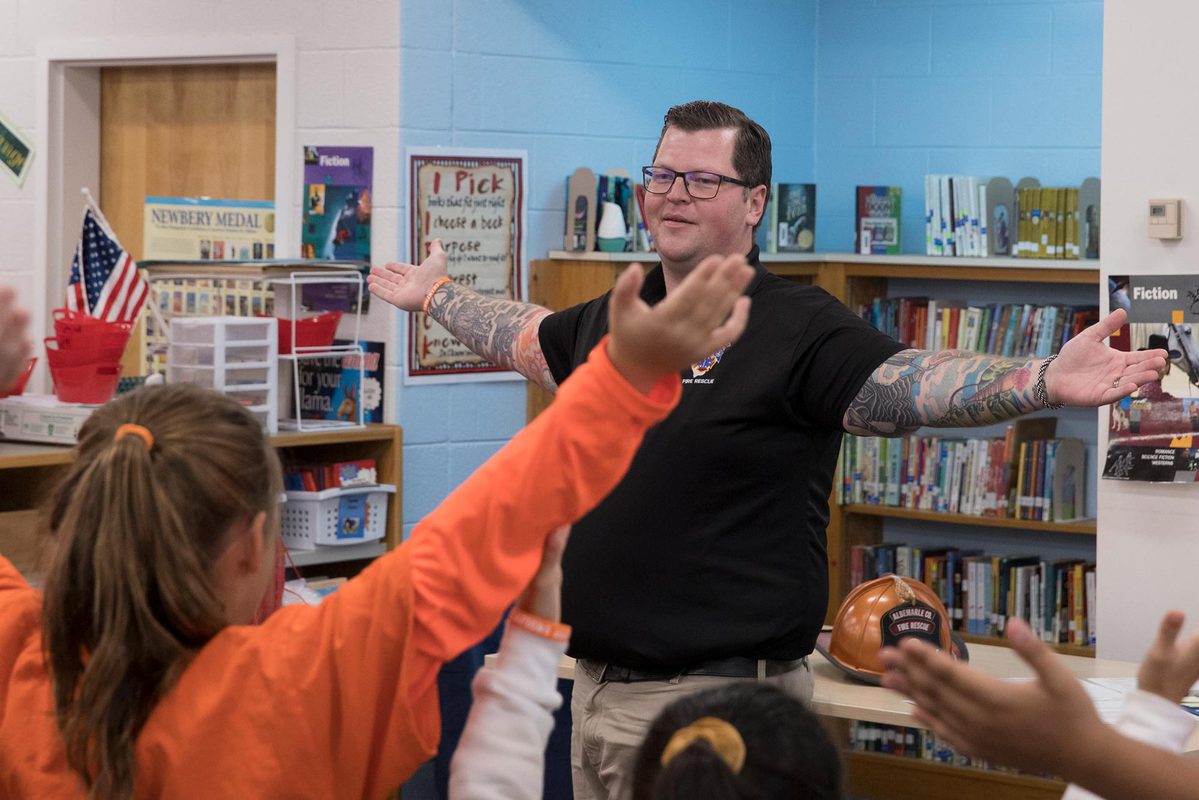 “You’ll be in school the rest of your lives,” he said solemnly. “I am.”

And indeed he is. At 34, Dean is slated to graduate in May from UVA’s School of Continuing and Professional Studies, earning a bachelor’s degree in health science management.

“I want to do it for me,” Dean said. “It’s a personal challenge just to say that I have achieved a degree from UVA. I wouldn’t have been able to do this 15 years ago when I got out of high school. [The School of Continuing and Professional Studies] gives me an opportunity to continue my degree at a pace that worked for me.”

While initially going back to school was a personal quest, Dean has seen the professional benefits of earning a degree.

“I have learned it’s never too late to continue your education,” Dean said. “There is always opportunity out there. I learned this a long time ago, but this reinforced it.”

The courses he has taken in different aspects of health care and management have given him different perspectives and opportunities to work with diverse personalities.

“It has helped me vastly improve my ability to communicate effectively with my peers, but also those above me, the senior staff and management in my department, as well as recognizing different leadership traits and abilities and learning how to apply them appropriately in my position,” Dean said.

“I was always the type of guy that wanted to help in some way or another,” Dean said. “When I would drive by car accidents or see ambulances or fire trucks out in public, I wanted to be involved and see how I can help.”

“I started as a volunteer firefighter/emergency medical technician and from there I have worked in emergency departments and various clinics before moving here,” Dean said. “I have been with Albemarle County Fire Rescue for the last seven years. I worked as a firefighter/paramedic with Albemarle County for 5½ years and then I transitioned to the role of public educator in the prevention division of the fire marshal’s office.”

With young children and a wife working as an acute care nurse practitioner, Dean said the change put him on a more family-friendly schedule with less time spent responding to emergencies, and in a position where he was working to prevent them. 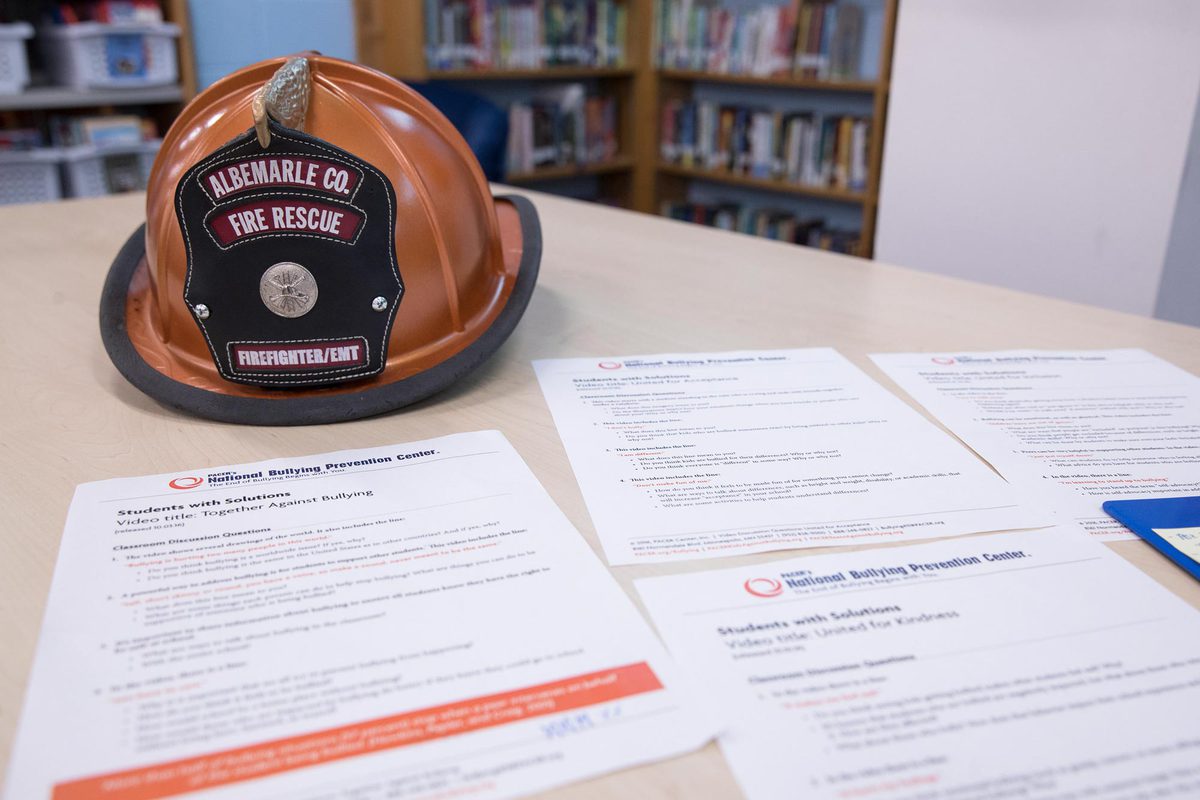 “It is not a reactionary type of position, as it was with a firefighter being on emergency calls,” Dean said. “I am more proactive. I have to plan. I have to schedule, work with data and things like that. It is being able to understand more and being able to create some projects.”

In developing new approaches to educating the public and within the emergency response community, Dean is creating, as his UVA capstone project, a training program to familiarize emergency responders with the signs and symptoms of someone who is on the autism spectrum.

“First responders may not see these signs and symptoms,” Dean said. “You have a tendency to follow your training and your protocols and these signs can mask or mimic a lot of other symptoms. If you don’t recognize them, it can lead to other problems down the road.”

Ana Abad-Jorge, program director and an assistant professor of health sciences management at the School of Continuing and Professional Studies who is working with Dean on his capstone project, said she is very impressed with her student.

“He is essentially what our Bachelor of Professional Studies in Health Sciences Management program was designed for – allied health care professionals with national certification in their field,” Abad-Jorge said. “Tyler is not only intelligent, but he is articulate and dynamic in his engagement within our program and with the other students in our online courses, during our live sessions. He is quick-witted and very clever and does a great job at bringing his experiences as a paramedic into our discussions about leadership, health care management and organizational behavior.”

Abad-Jorge said Dean has a strong future in the emergency services and in teaching.

“Tyler will go far as a leader within emergency medical services, but also as an educator,” she said. “He is passionate, engaging and inspiring as an educator and has a commitment to serving and providing quality health care to underserved groups and specialized populations, such as children and adults with autism spectrum disorders and intellectual development disorders. It has been a joy and a privilege to have Tyler in our program.”

Dean said his Continuing and Professional Studies program, which included courses in behavioral theory, leadership and management, has helped him with this transition.

“As I have gotten older and I have worked in a big department, I can see how some of these behaviors, these traits and this education have helped me,” he said. “Some of the leadership principles I have learned have helped me be better at what I have done. Others have been really beneficial in helping me organize myself mentally, helping me plan ahead and create big projects.”

Dean knows the health sciences management program is a good fit for him.

“It was a curriculum I was interested in,” he said. “I wasn’t being forced to take classes that didn’t apply, or were were required, but were not necessarily something that was interesting to me. … I want to learn about something I enjoy – something I can use and take in.”

His continued education gave Dean the confidence to create the part-time public educator position he currently occupies. He wants to expand it so there would be a dedicated person focused on attending community events, health safety fairs and classroom settings to educate children, adults and businesses on different fire and life safety techniques.

“If we can prevent these incidents from occurring, prevent fires from starting, prevent people from being injured or worse in a house fire, then that’s the goal,” Dean said. “When I was in operations, a majority of our calls would go to assisted living facilities and skilled nursing facilities for falls and things like that. A lot of those falls occur because of things that are very simple fixes. Too many rugs, too many newspapers and magazines stacked up, too much furniture in the small apartment into which they moved.”

Through these interactions, Dean realized he was good at educating.

“We have a lot of firefighters who want to communicate and educate and talk and some that just aren’t very good at it,” Dean said. “You can’t expect everyone to be comfortable around 50 kindergarten children or 30 senior adults. I come in there and help facilitate that.”

Once he has achieved his bachelor’s degree, Dean may consider further education, but he is not going to rush into it.

“I’m going to bask in the achievement for a little while and see where this career takes me,” Dean said. “Whatever other doors open up for me, family comes first. If I can find time, then we will see where it goes.”

A Year We Will Never Forget: 2019-20 in Review END_OF_DOCUMENT_TOKEN_TO_BE_REPLACED

‘What Will You Carry With You?’ Remarks From UVA President Jim Ryan END_OF_DOCUMENT_TOKEN_TO_BE_REPLACED