Convocation Speaker: Happiness Is Learning, Reflecting, Achieving – as Well as Surfing and Sitting Under a Palm Tree 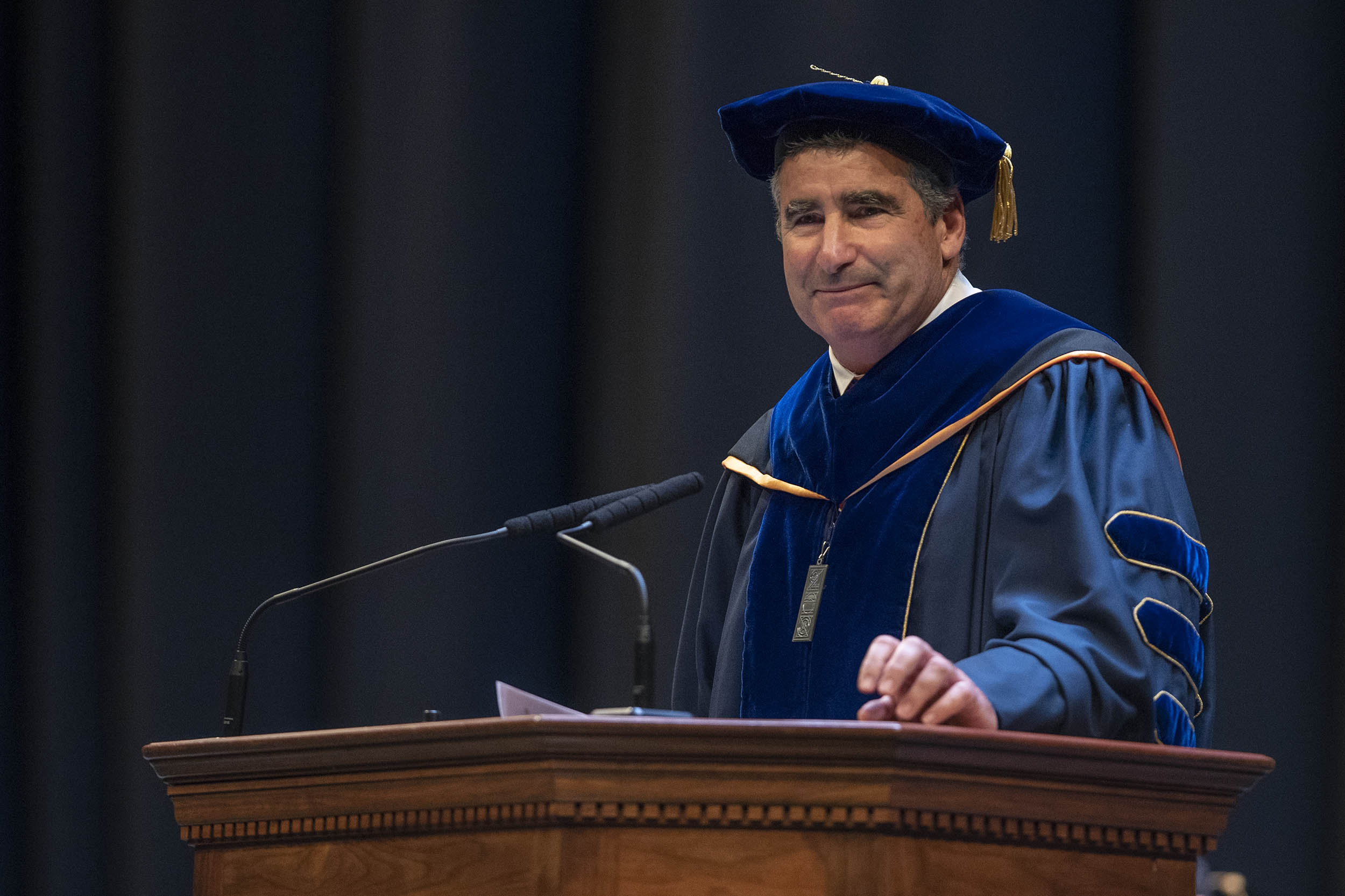 At Friday’s Fall Convocation, University of Virginia Executive Vice President and Provost Thomas Katsouleas explored the secret of happiness with Intermediate Honors recipients, telling them they were already ahead of the game.

During the ceremony in the John Paul Jones Arena, held in conjunction with Family Weekend, UVA President Jim Ryan presented two Thomas Jefferson Awards – one for excellence in scholarship, to Charles A. Holt, A. Willis Robertson Professor of Political Economy in the Department of Economics and professor of public policy in the Frank Batten School of Leadership and Public Policy; and one for service to Richard M. Carpenter, patient care services manager at the UVA Medical Center. The awards are the highest given by UVA to a member of the University community. 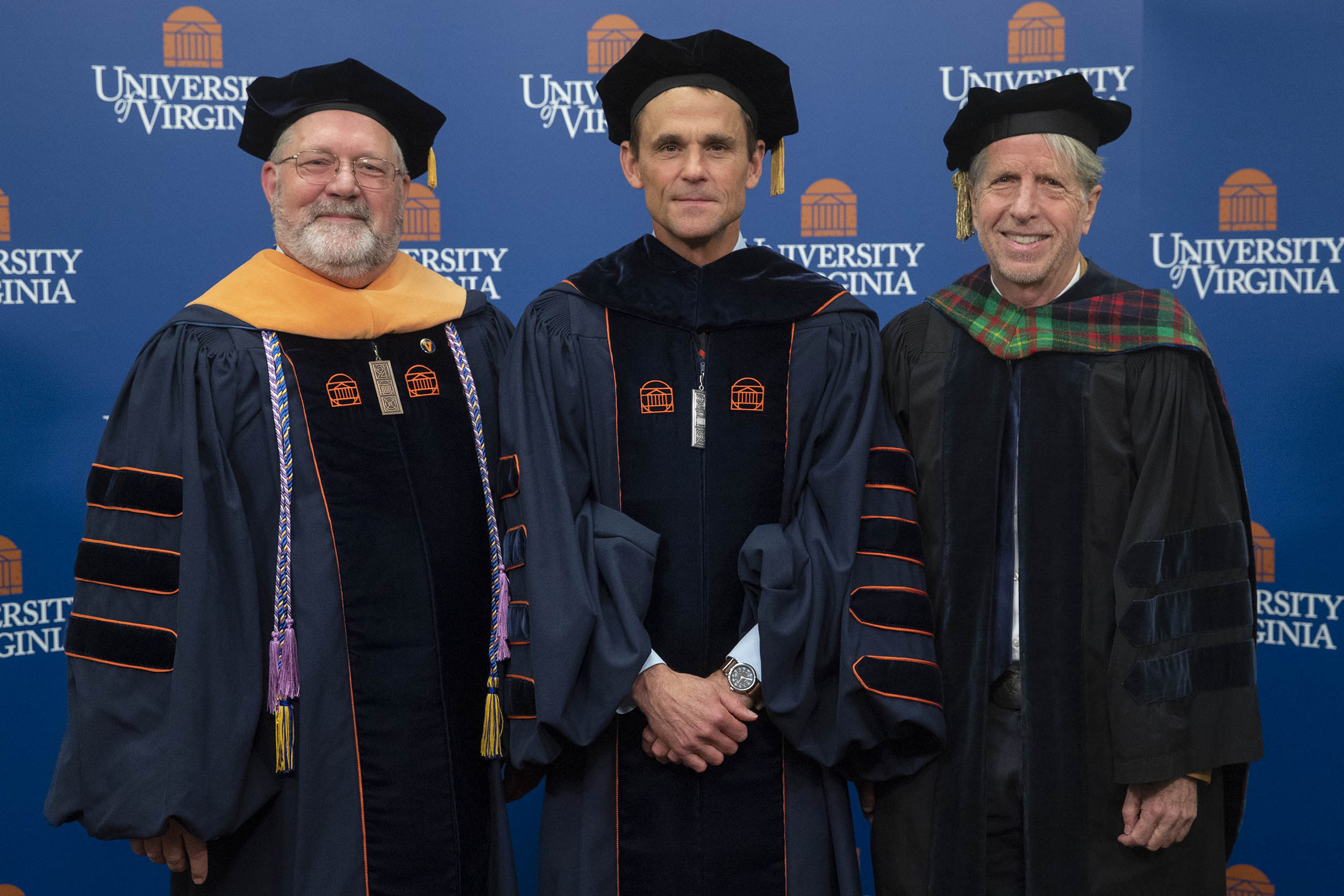 Ryan also recognized the winners of the All-University Teaching Awards, who had been announced in the spring.

In his keynote remarks, Katsouleas, a leading scholar of plasma science, recounted for the students where he had been in the fall of his third year at school: recently transferred into the University of California at Los Angeles from a community college, and having just failed his calculus midterm examination.

“You are in a far better place than I was,” he said. “You can stop worrying so much about checking boxes or completing degree requirements and instead focus on bigger questions.”

Those questions include: What value do you bring to, and get from, your time at UVA, and how will the next two years make a difference in your life and that of others?

Katsouleas cited his own quest for happiness over the years and the advice he had gotten from mentors, including his calculus teacher at Santa Monica Community College, whom he referred to as simply “Mr. Crawford.”

“All happiness comes from successful effort,” he quoted Crawford as saying.

“That’s it,” Katsouleas said. “Effort is necessary; if it comes too easily, there is not much satisfaction. But success is necessary, too. It seemed simple and true enough.”

But then he cited UCLA chemistry professor Donald Cram, who had received a Nobel Prize.

“I think we can all agree he expended successful effort,” Katsouleas said. “But according to him, one of his greatest sources of happiness was surfing and sitting under a palm tree at San Onofre Beach. Don’t get me wrong, he seemed pretty happy that he had won the Nobel Prize, too, but clearly there was something to be said for aesthetic and kinesthetic pleasures.”

Then he cited Socrates: “The purest form of happiness is sharing with someone else something you have learned.”

As a young engineering professor, Katsouleas encountered Richard Easterlin, who founded a field of study known as “happiness economics.”

“His biggest contribution came from surveying hundreds of people at all stages of life and finding three correlations with happiness: health, marriage and education,” Katsouleas said.

Of these, Katsouleas said health seemed obvious; he declined comment on marriage and focused on the education aspect.

“What the data did show is a measurable separation in happiness between those going to college and those not, and that gap persists for the rest of life,” he said. “So you are totally ahead of the game. If you happen to be a surfer from California, you are really winning.”

“So what have we learned?” he said. “Happiness comes from surfing and sitting under a palm tree and also working hard. It comes from taking care of your health and your family life. It comes from helping someone across the street and helping the planet. And it comes from learning.” 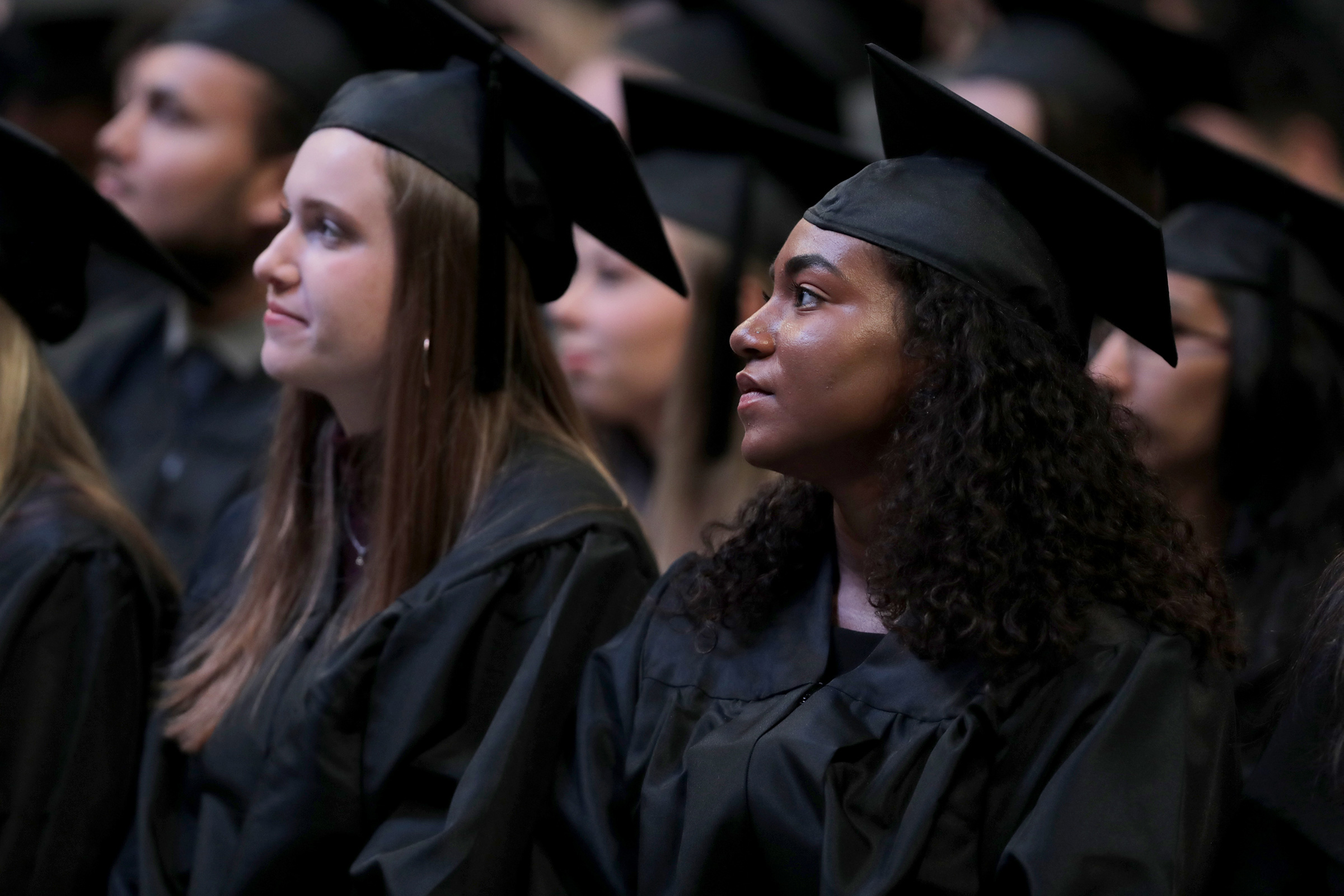 And while learning, he suggested the students allow for important detours that will also educate them.

“You need time to discover who you are and your place in the world; something best done inefficiently through an exploration of blind alleys as well as main thoroughfares,” he said. “You also need time to create and be involved in a community – both here on Grounds and in Charlottesville and beyond – where you can share what you have learned. And you need to take some time to sit under a tree and think.”

While he cited some school experiences, Katsouleas said he learned a great deal as a weekend lifeguard at Santa Monica beach.

“I didn’t lifeguard in preparation for a future position in higher education,” he said. “It was a way to be in a place that I loved, with people I respected, doing work I believed in. But inadvertently, I also gained experience with supervision, human resources, law and dealing with the public, all of which have been useful to me now.”

He said the detours from a straight-line path in life can provide experiences that give diverse perspectives, which he told the students they could bring to later challenges. He suggested the students take what they have learned in the classroom and apply it to real-life experiences while they are still students. UVA offers these opportunities through internships and research projects, pitching a start-up idea or volunteering through Madison House, he said, advising the students to think about how a combination of coursework and experience can prepare them to deal with the larger problems of society.

“One of the things that is special about a UVA education is the strong sense of student self-governance – that sense of ownership of this place,” Katsouleas said. “That is the magic of UVA. And it is a powerful advantage for you and for society. If you can keep that same sense of ownership and responsibility and extend it to the community and the world beyond Grounds, you can design and realize a future that reflects your values.”

He summed up his remarks with his own recipe for happiness: “Work hard at learning; take time to reflect; and share and use what you’ve learned to help others. We have given you the education; you’re going to have to take care of the health and marriage on your own.”

“I know your UVA education is giving you that ability – empowering you to help people, to solve grand challenges and to make the world more peaceful and just, so you have the responsibility to do just that,” he said. “However you choose to pursue that responsibility, you have my assurances, along with those of Socrates and Mr. Crawford, that you will be happy that you did.”

Following the address, Ryan presented Intermediate Honors and the Thomas Jefferson Awards. In presenting the Intermediate Honors, Ryan stressed the word “intermediate,” telling the students, “You are not yet finished. So keep asking questions and challenging yourself.”

Holt, the winner of the Jefferson Award for scholarship, came to the University in 1983 as an associate professor in the Department of Economics and has been a transformative and influential scholar and teacher in the field of experimental economics. He is known internationally for his work in both experimental and game-theory economics. 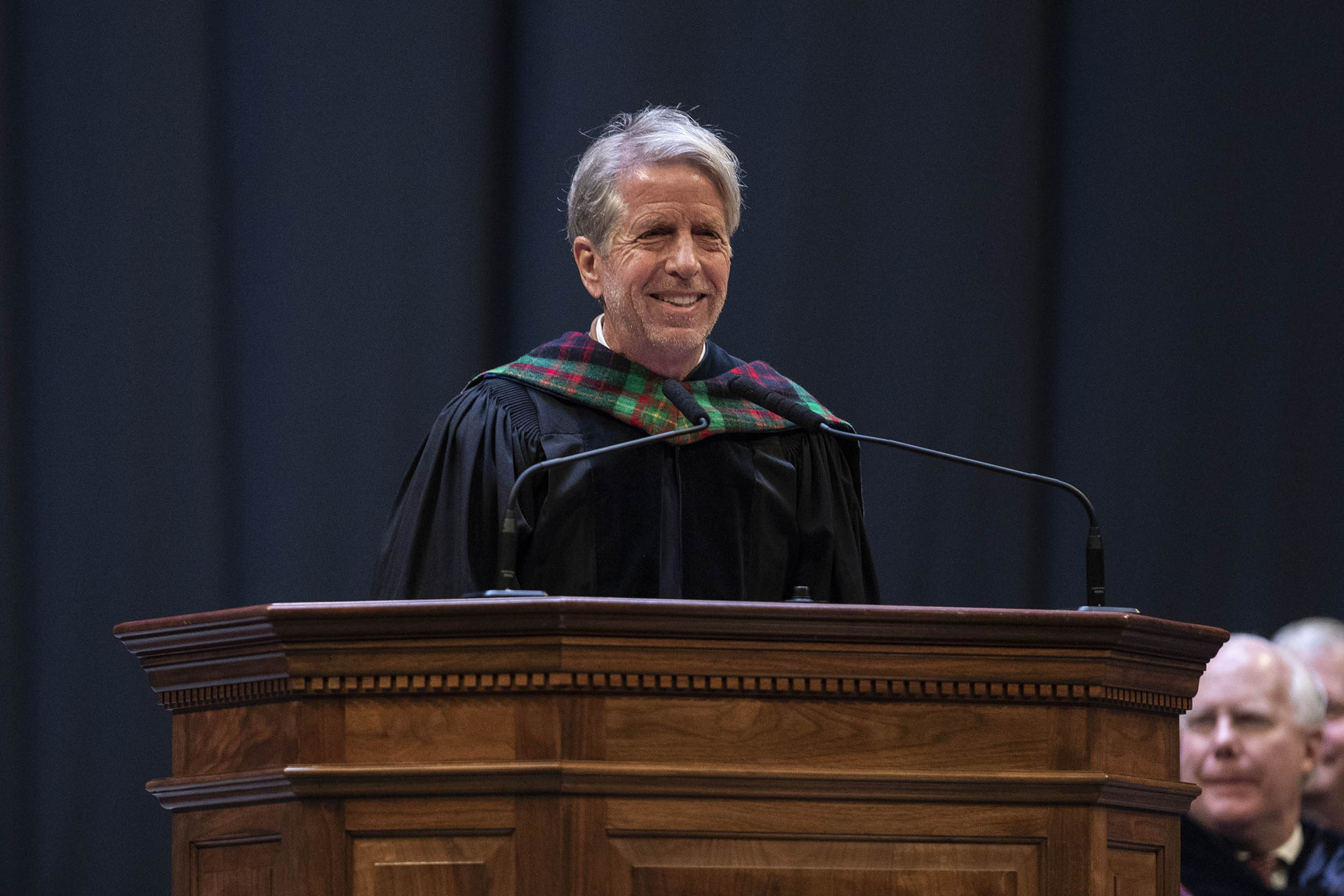 Holt has written five books and more than 100 journal articles and, at last count, has received nearly 20,000 citations in scientific journals. The National Science Foundation has awarded him  17 grants. Holt is a founding co-editor of the journal Experimental Economics, and developed the web-based Virginia Experimental Economics Lab, known as VeconLab, which makes economics research and teaching resources available through free, interactive software.

Holt mentored both students and colleagues, and has won teaching and mentoring awards. His emphasis on both graduate and undergraduate student involvement in research and classroom experiments has played a key role in developing young economists at UVA.

Upon receiving his Jefferson Award, Holt said it was very meaningful to him, especially when he thinks of his colleagues who have received it in the past.

Carpenter, the winner of the Thomas Jefferson Award for public service, came to the UVA Medical Center 31 years ago; for the last 20 of those years, he has served as the patient care services manager for the Medical Intensive Care Unit – a unit that, with 29 beds, more than 100 employees and a budget of $10 million, is twice the size of the others at the hospital. His colleagues lauded his strong leadership in a unit that directly impacts the health and well-being of patients and their families. 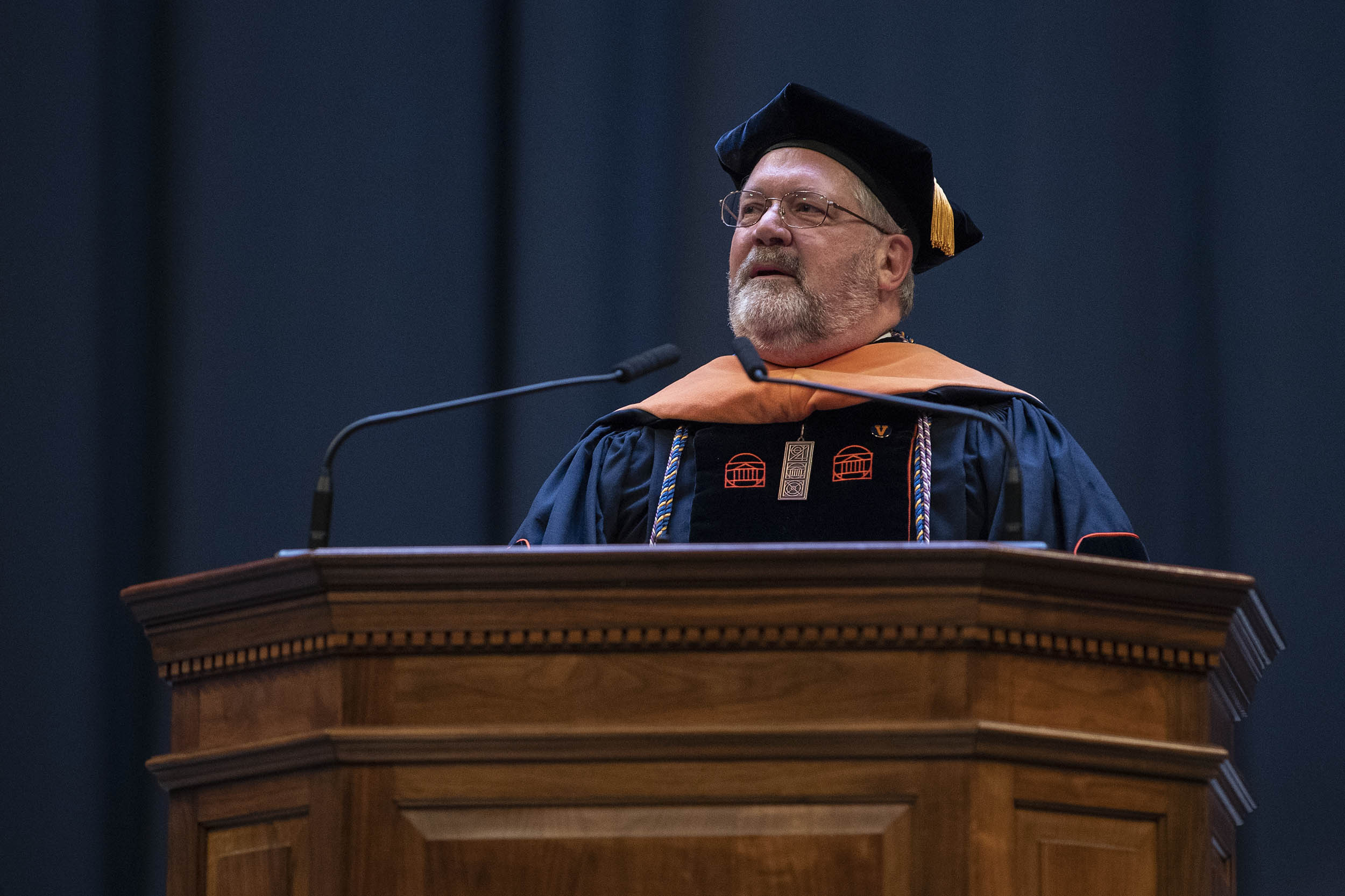 In an era where qualified nurses have their pick of positions, Carpenter’s unit has experienced employee turnover rates of between 3 and 5 percent, the lowest in the Medical Center, and there is a waiting list of people who want to work with him. Nurses under his supervision are regularly promoted on the clinical ladder and nominated for awards that honor compassion and care for patients. His unit has seen improvements in clinical outcomes, such as reductions in dangerous infections that exceed national benchmarks.

Carpenter came to UVA with an associate’s degree in nursing from the University of South Carolina-Aiken. He built his team while earning three degrees from UVA’s School of Nursing: a bachelor’s, master’s, and finally a Doctor of Nursing Practice, focusing on staffing responses to designated special pathogens, such as Ebola.

As his educational achievements propelled him forward, he always made sure to extend a hand to help others on their way. This year, 22 of his bedside nurses hold master’s degrees, which is rare even in an academic setting. He now serves as a faculty member for the Clinical Nurse Leader Master of Science in Nursing program, ranked No. 2 in the country.

Carpenter’s educational focus on special pathogens management has translated to important contributions to medical management in the hospital. When the U.S. faced a potential Ebola outbreak several years ago, Carpenter was one of several Medical Center leaders who developed a plan of care for suspected cases.

His dedication to health care outcomes extends beyond his office and his fabled rocking chair, where colleagues and staff sit to share their thoughts. A similar spirit of openness and caring is evident in his volunteerism in the community and the region, from rebuilding flood-damaged homes in Southside Virginia to volunteering to repair substandard housing in Appalachia.

Carpenter, who said he was shocked at having received the award, said being at the UVA Medical Center was an opportunity to work with some of the best and brightest health care professionals, as well to teach future nurses to be the best they can be. He thanked family, friends and colleagues for their support.

Class of 2020: Memories and Moments From a Long-Anticipated Celebration END_OF_DOCUMENT_TOKEN_TO_BE_REPLACED