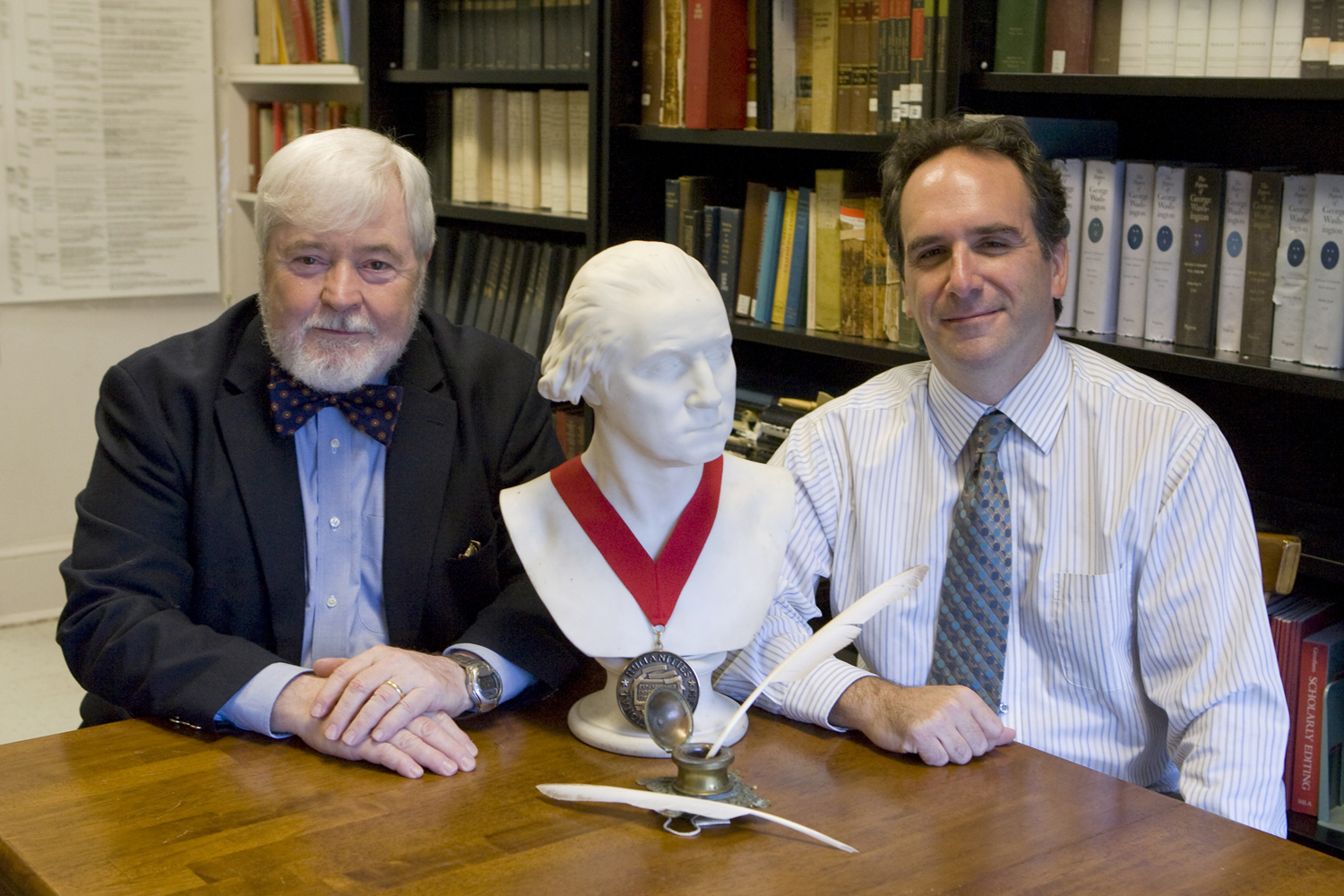 September 27, 2010 — Theodore J. Crackel, whose digital re-launch of the Papers of George Washington helped set a new course for traditional documentary editing projects, has retired after six years as editor-in-chief.

Edward G. Lengel, formerly senior editor, has taken over leadership of the University of Virginia-based project, which annotates and publishes volumes of Washington's correspondence and other documents believed to have passed through the hands of the Revolutionary War commander-in-chief and first U.S. president.

Crackel, 72, spent 18 years as a historical documentary editor after a 21-year career in the U.S. Army and shorter stints as a senior fellow at a Washington think-tank and as a strategic planner in corporate America. In 1993, he launched and headed the "Papers of the War Department, 1784-1800" – an effort to reconstitute, and make available digitally, records that had been destroyed in a fire in 1800. He joined the Papers of George Washington project in 2004 as the fifth editor-in-chief.

Upon his arrival, Crackel set about creating a digital team to make more readily accessible the thousands of historical documents that tell the story of Washington's life.

"The digital edition of the Washington Papers was a logical extension of the work I had been doing," he said. "With Rotunda, the digital imprint of the University of Virginia Press, and its marvelous team headed by David Sewell, and with our own team headed by Jennifer Stertzer, we were able to create a model that has become the gold standard – even for the other Founding Fathers projects."

To date, the Washington Papers project has published 62 letterpress volumes of Washington documents; 59 of those volumes, along with a cumulative index, now are available online via subscription.

While the digital edition of the Washington Papers may be remembered as his greatest contribution to the project – and perhaps to the field of documentary editing – Crackel also laid the groundwork for several related endeavors. Currently in progress are the development of a comprehensive George Washington bibliography, in partnership with the Center for History and New Media at George Mason University, and the annotated publication of Washington's extensive financial papers, an ambitious undertaking that was heralded earlier this year by a conference of premier scholars at Mount Vernon.

Crackel also initiated a series of Travel and Learn continuing education courses that will start in 2011 with a tour of the 1775-76 sites of Lexington, Concord, Bunker Hill and the siege of Boston, followed in 2012 by those of the 1776 crossing of the Delaware, and the Trenton and Princeton engagements, and then, year by year, to Yorktown.

"I have always had a great admiration for George Washington," Crackel said, "but, like the project's first editor-in-chief, Donald Jackson, I came as a Jefferson scholar. That said, over the past six years, I have gained a new and profound respect and affection for Washington, and an unqualified determination to help ensure the completion of this work and the preservation of his written legacy."

Lengel said that Crackel has left the project in good shape. "Ted not only established several important new public initiatives for the Papers of George Washington, but also left the project humming at a high level of efficiency and collegiality," he said.

Lengel, 42, the longest-serving member of the current Washington Papers staff, earned his Ph.D. in history from U.Va. in 1998, by which time he already had worked for two years as a graduate assistant on the project. He joined the staff in 1998 as an assistant editor, later becoming associate editor and then senior editor, and prior to his appointment as editor-in-chief had served on the "Retirement" and "Revolutionary War" series of letterpress volumes.

He has published several books, including "General George Washington: A Military Life," a study of Washington's life as a soldier; "This Glorious Struggle," a collection of Washington's Revolutionary War letters; and "To Conquer Hell," a vivid portrait of the bloody Meuse-Argonne campaign of World War I. As the sixth editor-in-chief, Lengel hopes to lead the Papers of George Washington through to its anticipated completion in about 15 years.

"The Washington Papers project will maintain its already high standard of productivity and scholarship," he said. "I also look forward to steering the project toward more active and visible participation in the University community. Among the new initiatives I have in mind is a plan to collaborate with K-12 and undergraduate students and schoolteachers in the development of educational programs for primary source-based founding-era research."

The Papers of George Washington was established in 1968 under the joint auspices of the University and the Mount Vernon Ladies' Association. An exhaustive worldwide document search has yielded the most complete collection of Washington documents ever assembled – photocopies of some 135,000 manuscript items from more than 300 repositories and private owners around the world.

The annotated documents are being published in separate series corresponding to significant segments of Washington's life. Completed series include "The Diaries of George Washington, 1748-99" (six volumes); the "Colonial Series, 1748-75" (10 volumes); the "Confederation Series, 1784-88" (six volumes); and the "Retirement Series, 1797-99" (four volumes). Two series remain in progress: "The Revolutionary War Series, 1775-83" has published 20 of an anticipated 40 or so volumes, and the "Presidential Series, 1788-97" has published 15 of an expected 21 volumes. The project also has published The Journal of the "Proceedings of the President, 1793-97," a one-volume diary dealing with the day-to-day work of the president.