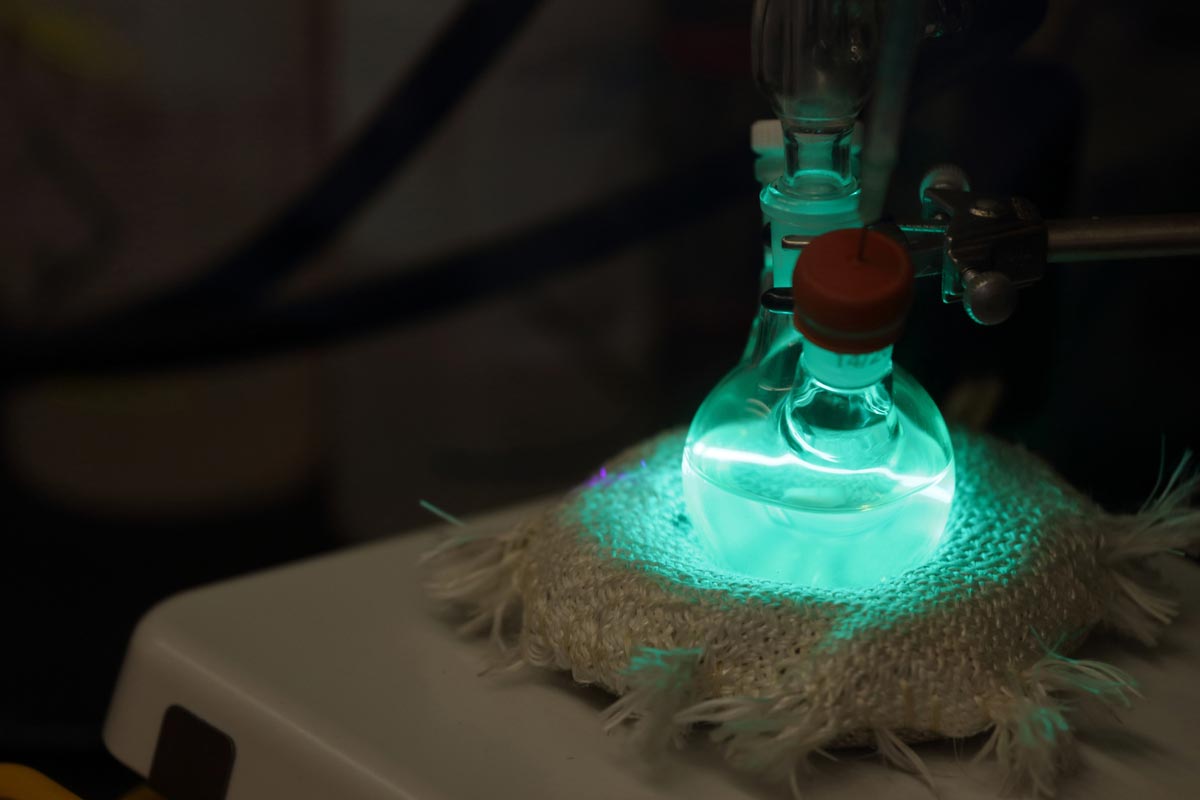 Quantum dots are synthesized in a flask in associate professor of chemical engineering Josh Choi’s lab. (Photo by Tom Cogill)

In a roundabout way, University of Virginia chemical engineering associate professor Joshua J. Choi and Commonwealth Professor of Physics Seung-Hun Lee are kindred spirits with the artists who created the beautiful stained-glass windows found in medieval churches and cathedrals. They are using the same technology that produces colored glass to help the Department of Homeland Security keep America safe.

More than 25 million cargo containers arrive in the United States by sea, truck and train each year. Homeland Security, through Customs and Border Protection, is responsible for ensuring nothing inside the containers can be used to attack the country, including radiological, nuclear, chemical and biological devices or materials.

It is the job of Homeland Security’s Countering Weapons of Mass Destruction Office to stop threats at the border by giving customs agents and security personnel tools to find dangerous contraband. Choi and Lee recently began a $1.75 million project for the federal office to develop improved X-ray and gamma-ray radiation detection materials called scintillators. Over five years, Choi’s optoelectronics nanomaterials lab at the UVA School of Engineering will receive $1.2 million of the overall grant, with the balance going to Lee’s lab.

Choi designs novel semiconductors that go into optoelectronics – devices that convert light to electricity or electricity to light – such as TVs, solar panels and the X-ray machines and radiation detectors at seaports, borders and airports. Scintillators enable detection of X-rays and gamma rays by converting the radiation’s otherwise invisible electromagnetic waves into light that we can see and measure more easily.

Existing commercial scintillators work, but the good ones are expensive to make, leading to a multi-step system to inspect shipping containers. First, containers pass through large radiation detection and X-ray portals – a speedy, low-cost procedure. But radioactivity is everywhere. Granite countertops, bananas and even cat urine can emit enough radiation to trigger an alarm, which in turn triggers an investigation involving time, people and expensive equipment to determine the source.

“I realized how powerful they can be when combined,” Choi said. “Both can be inexpensively manufactured by simply drying solutions, while resulting in superb performances on par with traditional semiconductors, such as silicon.” 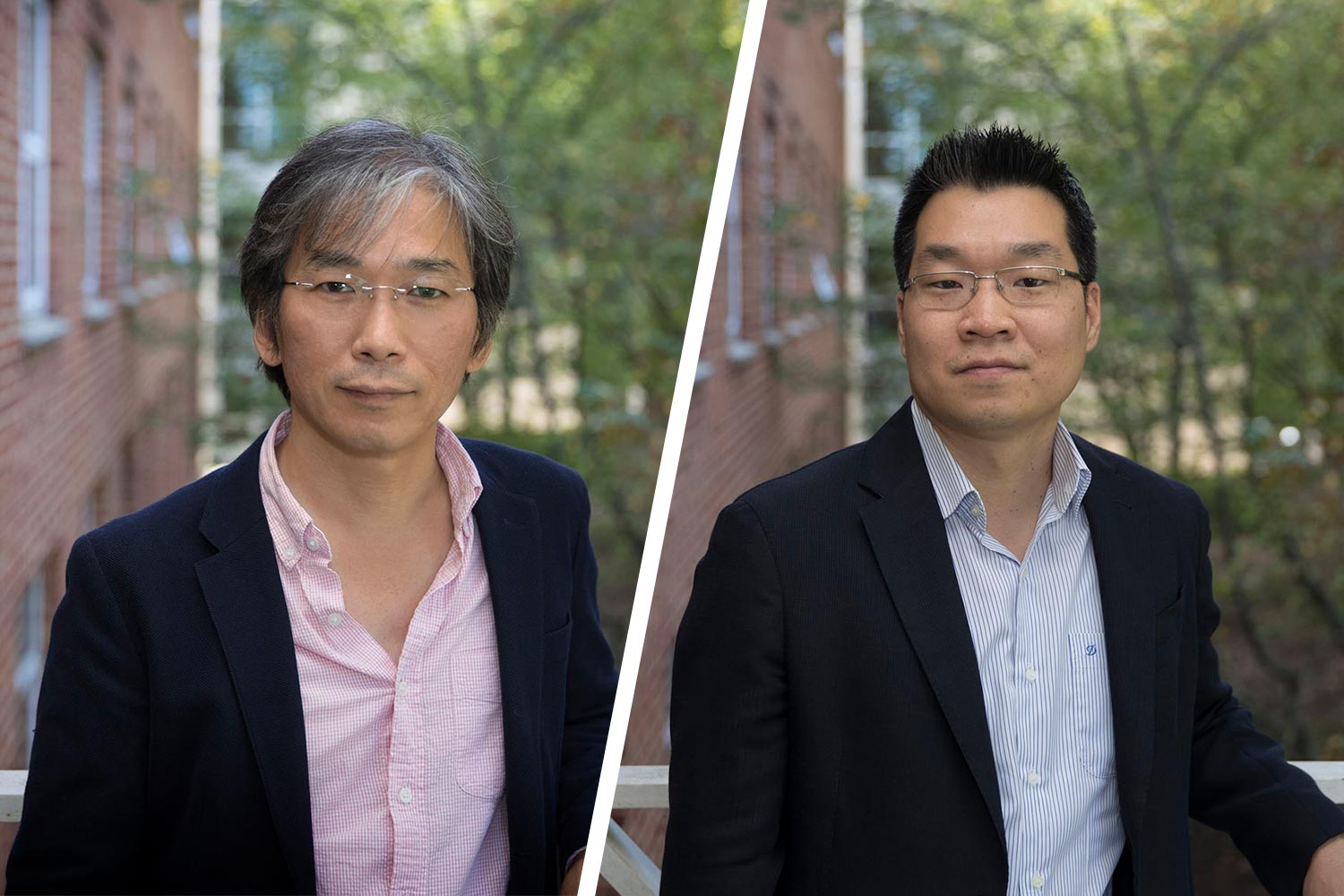 Metal halide perovskites are composed of metals such as lead, tin and cesium, and halogens such as chlorine, bromine and iodine, all of which are abundant and inexpensive. Among semiconductors that can be manufactured from solutions, Choi notes metal halide perovskites hold the world record in solar cell efficiency. They’re also excellent at absorbing X-ray and gamma-ray radiation and converting it into electricity.

Colloidal quantum dots are nanoparticles of semiconductors that can emit bright light as electricity flows through them. Choi “dopes” the metal halide perovskites with the quantum dots, letting the perovskites do the heavy lifting of absorbing the radiation while the quantum dots convert the generated electricity into a visible light. Both materials are highly tunable, allowing him to precisely design the resulting scintillator’s optical and electrical properties. This is possible thanks to a cool quirk of nature – and the fundamental principle of nanotechnology: When you dice up a substance into nanoscale particles, you can manipulate the substance’s properties by controlling the size of the particles.

For example, you can change the color of the light emitted by quantum dots to produce brilliant and energy-efficient TV displays. Or, you can add bits of metal to glass to scatter different-colored light.

Choi’s process is similar to producing salt from seawater, in which the evaporated water leaves behind dry powder. The powder is sintered into pellets by applying pressure and moderate heat. In this way, he can make large quantities of the scintillator material with the desired characteristics.

“The goal is to make the scintillator brighter, faster and cheaper,” Choi said. “For imaging, a short decay time and afterglow make the scintillator faster, allowing a higher frame refresh rate. For example, an infrared camera’s frame rate is often quite low, limited by the material and device architecture. When someone’s moving fast, the image will be choppy or blurry. If the scintillator is bright and fast, then we can detect things sensitively, we can image faster and can do spectrum measurements efficiently.”

Spectrum measurements are how screeners can tell a radiological threat from bananas and other innocuous sources. Spectrum measurement determines how strong the emitted X-rays and gamma rays are in different wavelengths. In contrast to visible light, ionizing radiation waves are short and hard to detect.

“Different radioactive elements have distinct, fingerprint-like features, but there is no scintillator that’s cheap, sensitive, fast and has good energy resolution for spectrum measurement. We want to achieve all these things combined,” Choi said.

Some scintillators that are fast, bright and sensitive enough to work well have to be “grown” in a single large crystal with all the atoms arranged in perfect order.

“Single crystals are expensive to make,” Choi said. “It requires very careful growth of the material. It’s time-consuming and energy-intensive, whereas we can make kilograms of our pellets to fill large areas in different shapes without sacrificing the performance.”

As Choi is developing prototypes for field testing, Lee’s lab will use neutron and X-ray scattering to study the materials from the inside.

“We’ll analyze atomic and intermediate-scale structures of our scintillators to evaluate the manufacturing conditions used to make them,” said Lee, who has collaborated with Choi to develop materials for low-cost solar cells since 2014. “Josh’s group will use the structural information we obtain to rationally optimize the manufacturing conditions for maximum performance metrics.”

For example, the scintillator won’t work properly if the quantum dots clump in one area.

“Without Seung-Hun’s expertise it will be almost impossible to see how the quantum dots are distributed across large volumes and evaluate the quality of the perovskite crystals as we try different manufacturing conditions,” Choi said. “Instead of working in the dark by trial and error, we’ll be able to characterize the materials as we go.”

Choi and Lee will recruit postdoctoral researchers, Ph.D. students and undergraduate students to the research team over the five-year project. Developing committed scientists and engineers well-trained in countering weapons of mass destruction is a key goal of the program. UVA team members, facilitated by the Weapons of Mass Destruction Office, will work in tandem with industry and national laboratory partners. In addition to accelerating the technology, they will form lasting professional connections, Choi said.

For Choi, the partnership with the Department of Homeland Security is an exciting opportunity to prove a promising technology and address a critical need – all-stemming from the quirky thing that happens when you chop something up into smaller pieces to make it do something useful.

Medieval artists didn’t know it, but they employed this principle to make their stained glass. The vivid reds, yellows and blues mostly come from gold and silver particles embedded in the glass.

“I think that’s the crux of nanotechnology,” Choi said. “It’s coming up with new materials that do not exist in nature from something of the exact same chemical composition. We thought that gold is just gold. But in nanoscale size, the same material behaves very differently depending on how small you make it, so there’s a lot of room for engineering in nanoscales. We are relying on that effect to make this scintillator work.”

When Less Is More: How Harnessing the Power of Subtraction Can Add to Life END_OF_DOCUMENT_TOKEN_TO_BE_REPLACED