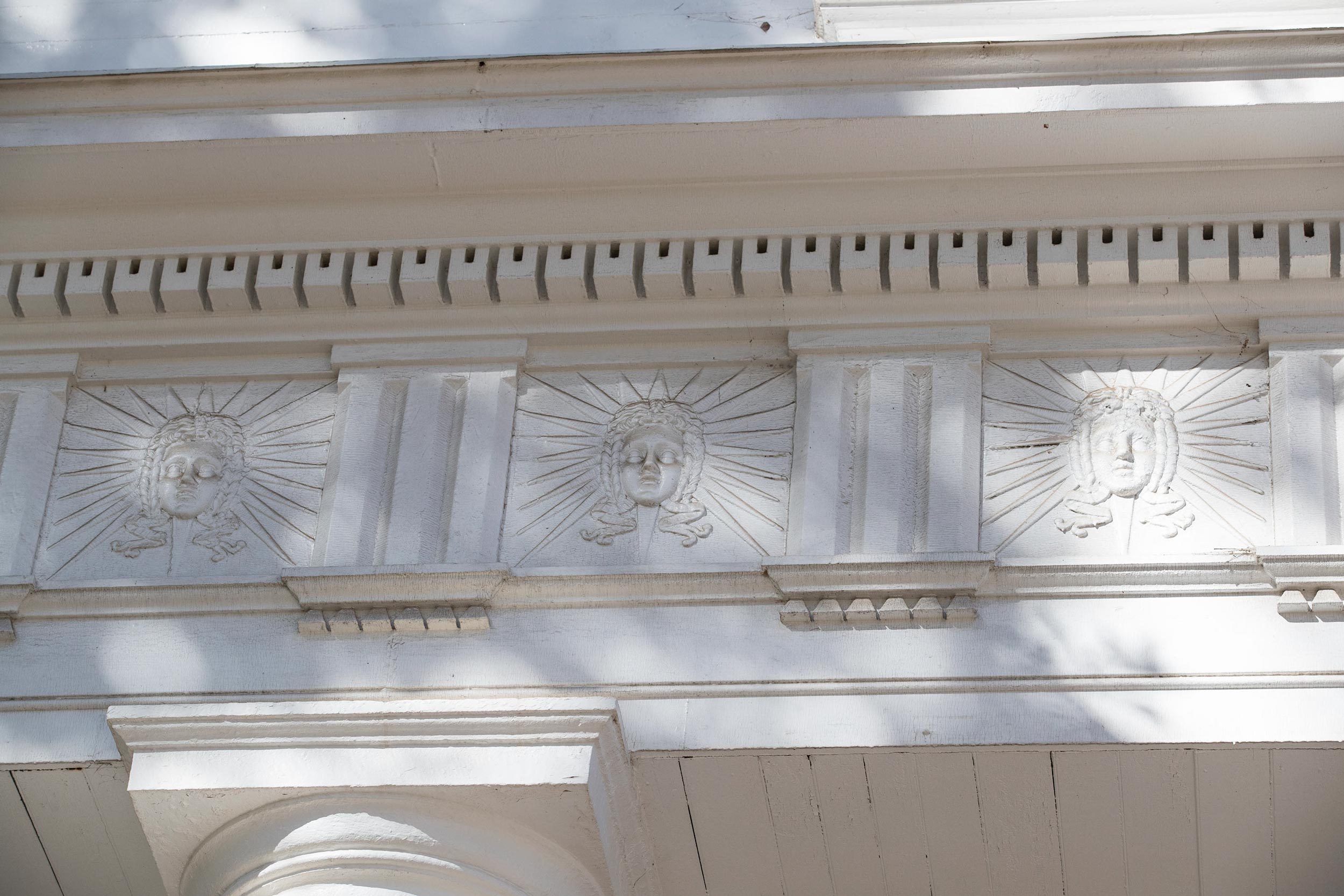 This summer, Pavilion X will again look like the rest of the Academical Village.

University of Virginia workers are giving Pavilion X a new, brighter coat of paint that will put it more in step with its neighbors. (They also will replace the roof on the rear addition to the pavilion and perform other carpentry repairs.)

For the past decade, the woodwork and the front columns on Pavilion X have been a stone color, a controversial, sandy brown shade that drew criticism because it was a variation from the standard bright white that became traditional on the Lawn in the 20th century. The stone color  was applied because a paint study performed in 2010 seemed to indicate that it was the original color.

As it turns out, the earliest paints in those samples taken at that time appeared slightly darker than they originally were, due to degradation and uneven paint grinding. A recently concluded study gained access to more protected and representative areas of the earliest paints.

“Over the last year and a half, we have undertaken a much more substantial analysis of the original finishes on the buildings facing the Lawn, including going back and looking at Pavilion X,” said Brian Hogg, senior preservation planner with the Office of the Architect. “There were more samples taken and it has become clearer that the color of Pavilion X originally was much closer to the color of all the other pavilions.”

Susan L. Buck, a private conservator who specializes in analyzing and conserving paint on wood and architectural pieces, conducted the new study with her colleague, Kirsten Travers Moffitt.

“It turned out to be a very complex project,” Buck said.

The complex project involved taking paint samples from around the Academical Village, using a scalpel to work down to the original wood. Buck and Moffitt carefully removed the samples and sealed them in plastic bags. Buck – who also worked alongside Mark Kutney, an architectural conservator with Facilities Management – took photos of each place from which the samples were taken. 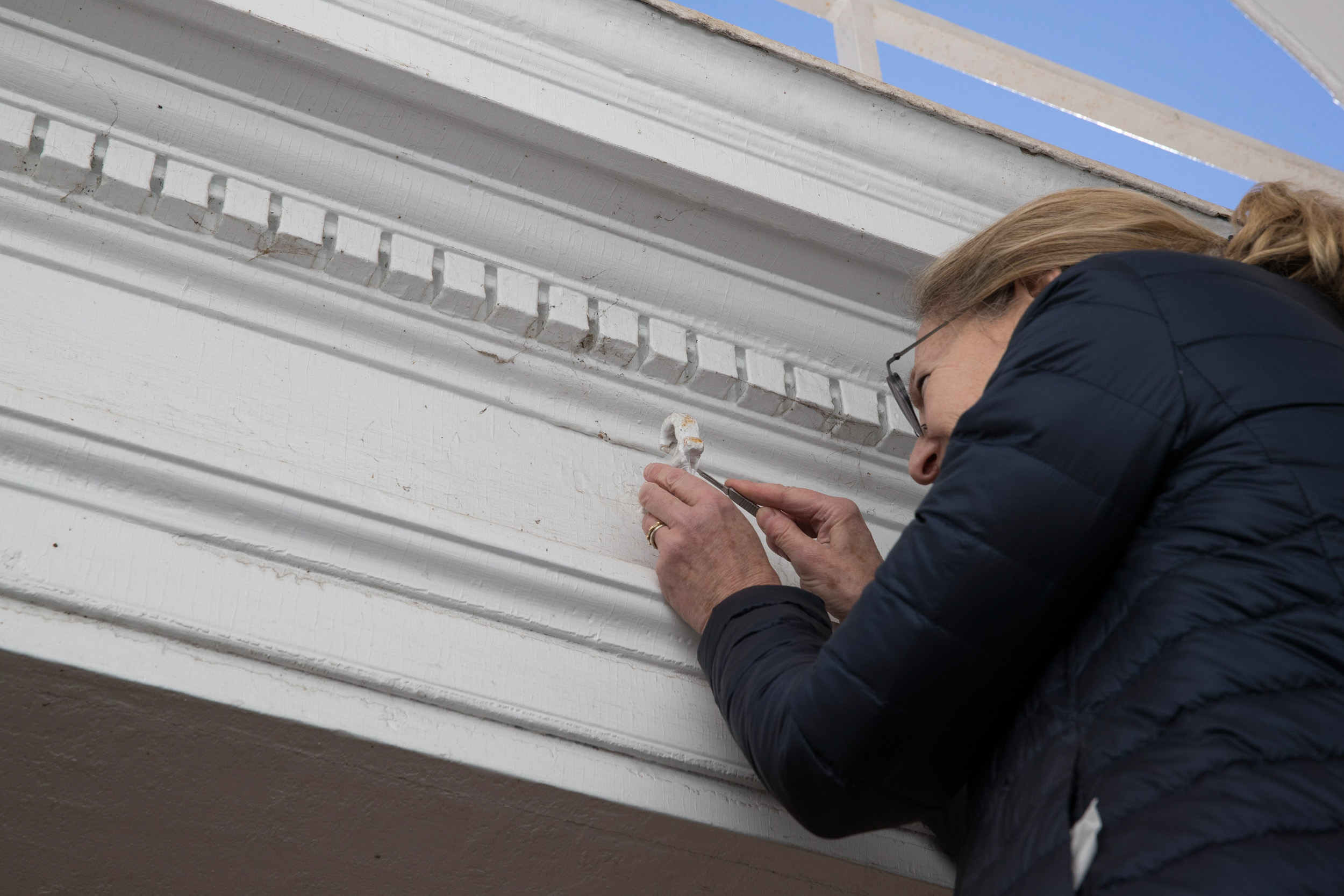 Buck said she was grateful that the painters over the years had put new paint coats on top of old, instead of stripping the old paint off to get back to the original wood surface.

The samples were placed in cubes of polyester resin, where they were polished to expose the cross section, which was then examined under an epifluorescence microscope, allowing her to see the varnish layers in the paint stratigraphies and organic binders in the paints, as well as variations in the colors applied over time. Once Buck found the target layer, she performed polarized light microscopy analysis to determine the pigments making up the original color. 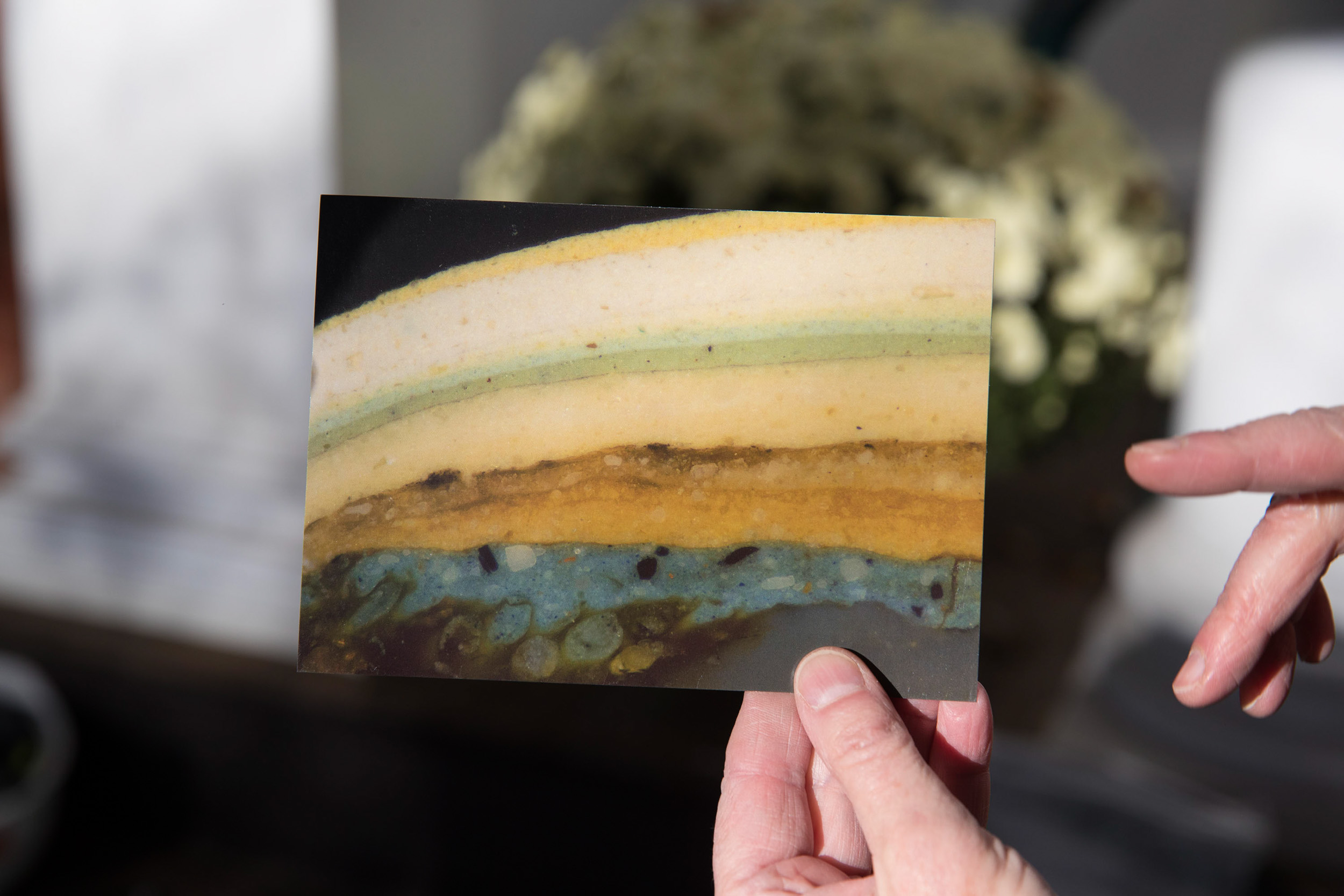 Buck said the buildings in the Academical Village were originally painted with a cream-based color that had other elements, such as red ocher, added in to vary the color. She said there were subtle variations in the shades of the pavilions.

“There was a coherency to cream-colored paints on the different pavilions, but the differences would have been visible on a sunny day,” Buck said.

Buck, who has done paint analysis at Thomas Jefferson’s residence at Monticello, believes that Thomas Jefferson was involved in the original paint selection for the pavilions. Part of her evidence is that the Apollo heads on the entablature on Pavilion I were originally painted with a paint made with chrome yellow, a brilliant yellow paint she also found on the walls of Monticello in Jefferson’s dining room. 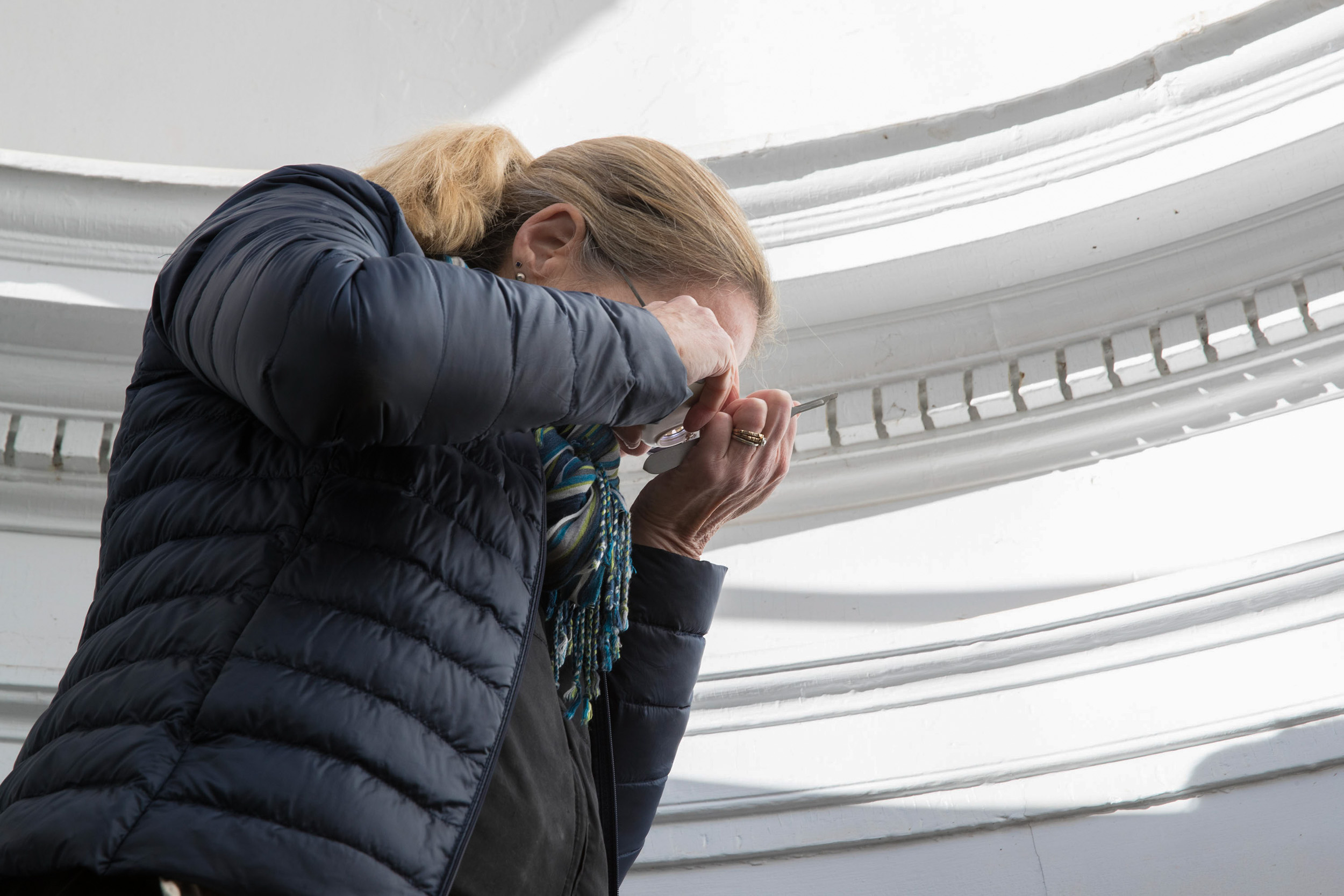 “Jefferson was quite conscious of color,” Buck said.

“There was a level of dynamism in the colors and in the ornament, which reinforces the notion that Jefferson is using these buildings as teaching tools,” Hogg said. “He’s highlighting some of the ornament, using polychromy. This is a way of expressing the architecture in a remarkably academic fashion and making it more engaging for the people who are looking at it.”

As part of the analysis, Buck and Moffitt read through historic structures reports to see when changes and modifications were performed on the pavilions and the Lawn rooms. Through this they could determine when new coats of paint were applied to the structures, such as the windows of the south wings of the Rotunda.

“We had her sample the cryptoporticus windows, on the south wings,” Kutney said. “We know those are not original – they were introduced in 1841 – There were two off-whites or tans, rather than the three that we see on the pavilions,

Performing a comprehensive paint analysis of the entire Academical Village puts many of the paint elements in context, instead of examining one building at a time.

“Susan has provided a lot if information in her report that I think helps us understand much better than we did in the past the real character of the Lawn,” Hogg said. “While over the years there have been many efforts to look over the individual buildings, this is the first that takes a comprehensive look in one project at all of the buildings together, and that is a really important step in piecing together the information that we have. Where some of our work has been one-off in the past, we have now established a context for the whole Lawn, and the at Pavilion X is a now reflection of that broader study and the context as we understand it.”

The color selected for Pavilion X after the color measurement and matching of the original paint is a Benjamin Moore shade marketed as “Swiss Coffee,” a variation of the creamy shade Jefferson had applied to the Academical Village and similar to the color of the renovated Rotunda. Hogg said it is a good simulation of the original colors used on the Lawn. 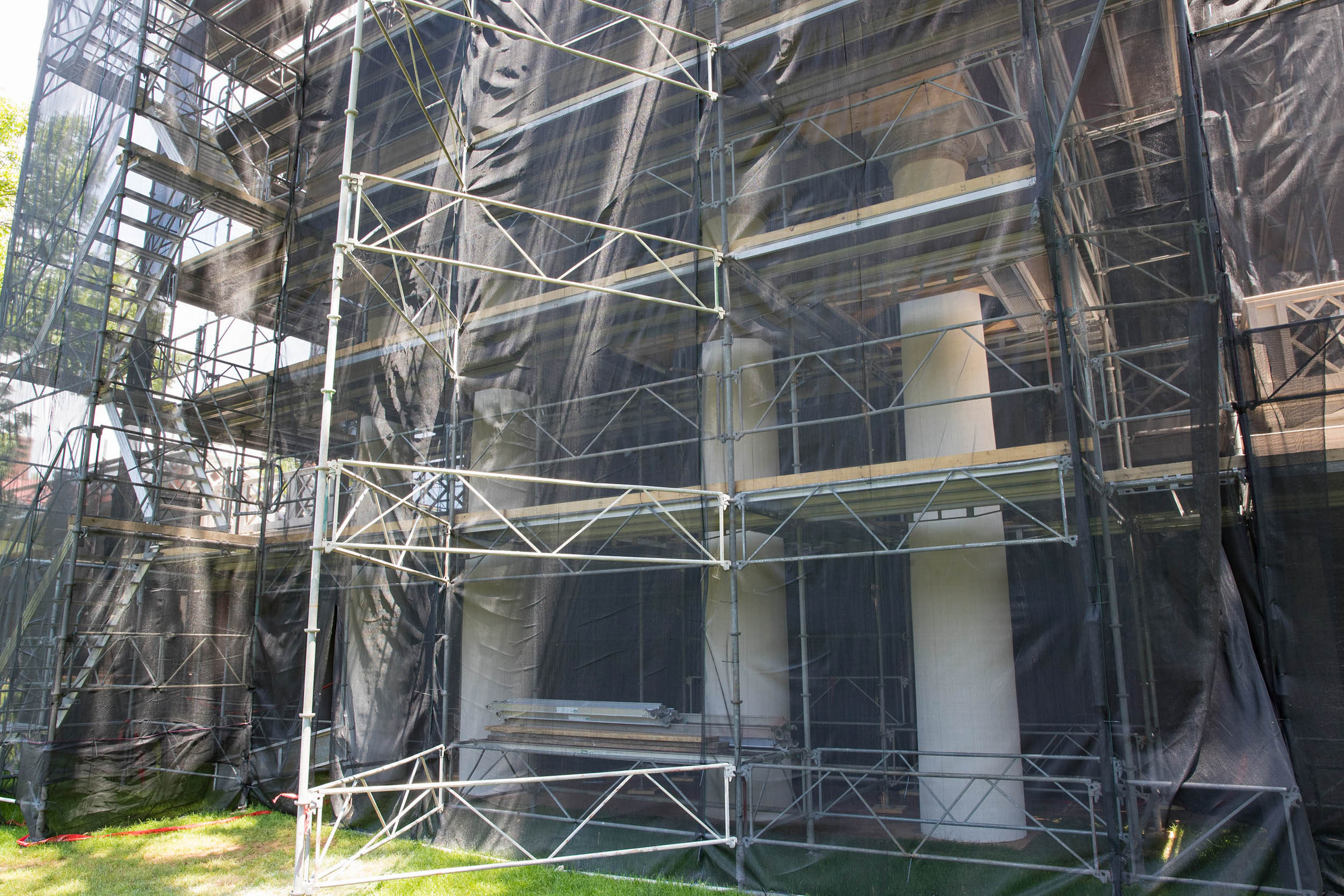 “It came to our attention that the School of Architecture had an original modillion block from the Rotunda in its possession,” Kutney said. “We had Susan sample that as well. It shows that it has the same early history that shows on the pavilions. The thought was that it came from the Annex, but the paint study confirmed that it came from the core of the Rotunda. So we actually do have a surviving fragment of paint from the Rotunda. And now we have a color.”

The first mention of the columns in front of the pavilions being painted is found in the Proctor’s Journal in 1834; initially they were unpainted. A thin limewash was first used to coat the columns. This was the traditional masonry paint at the time, but it had a weak opacity. With each additional repainting, the columns would have become lighter and whiter, but with a tan undertone. Over time, their appearance evolved into a bright white as other modern paints were used.

Hogg said when the stone hues were put on the pavilion, they were working with the best information they had at the time. “We now have substantially more information and are refining our actions based on that additional information,” he said.

“I think that [earlier], we were convinced based on what the evidence told us,” Kutney said. “Now, not only do we have fresh evidence, we have confirmation in that we have looked at every other pavilion. Now we have this supporting body of information. I think we are pretty convinced, because this is a more comprehensive study.”

A Year We Will Never Forget: 2019-20 in Review END_OF_DOCUMENT_TOKEN_TO_BE_REPLACED

‘What Will You Carry With You?’ Remarks From UVA President Jim Ryan END_OF_DOCUMENT_TOKEN_TO_BE_REPLACED