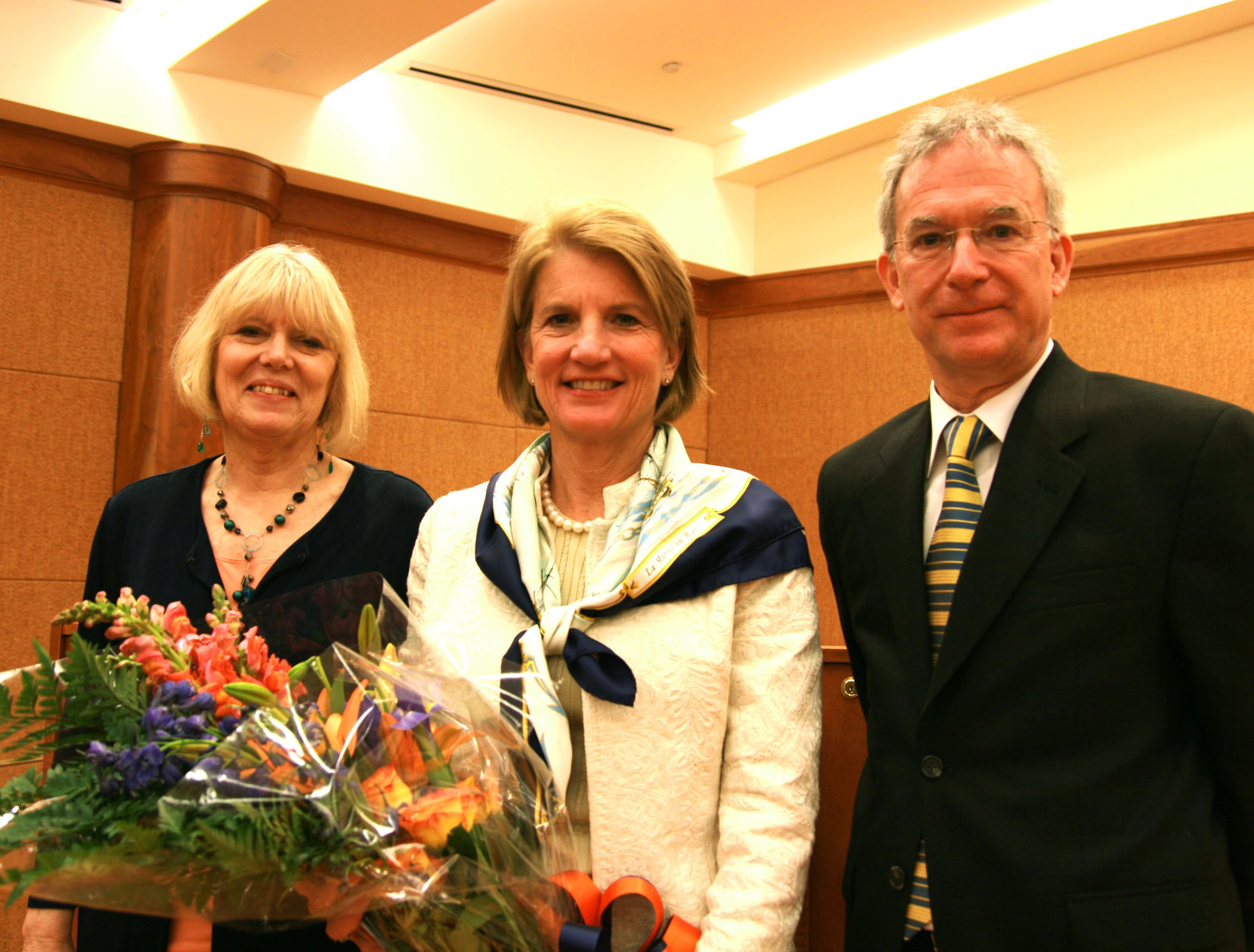 A 1976 Curry School of Education graduate, Capito is the 17th alumna to be recognized for her excellence, leadership and extraordinary commitment to her field.

As part of the day's events, the Women's Center held a luncheon in her honor, at which Robert Pianta, dean of the Curry School, presented the award to her. Capito also toured the University, met students for breakfast and visited two classes: politics professor Larry Sabato's introduction to American politics and education professor Jim Wyckoff's graduate-level seminar on K-12 education policy.

Capito, a Republican, began her career in the U.S. House of Representatives in 2000, running a campaign that highlighted her dedication to quality education and expanding health care, particularly in the rural areas of West Virginia. Re-elected in 2008, she is serving her fifth term.

She helped obtain prescription drug coverage for seniors under Medicare in W.Va., and is dedicated to reforming mine safety laws and regulations; supporting environmentally sensitive technology for coal power plants; and stimulating the local economy with new jobs and increased support for small businesses.

As the only woman serving in the West Virginia congressional delegation and the first Republican woman elected to a congressional seat in the state, this daughter of three-time W.Va. Gov. Arch Moore Jr. prides herself on being "approachable and accessible" to the constituency that elected her.

Born in Glen Dale, W.Va., Capito received her undergraduate degree in zoology from Duke University before coming to U.Va., where she earned her master's degree in education. Before entering politics, Capito served as the director of the Education Information Center for the West Virginia Board of Regents and as a career counselor at West Virginia State University. She then ran and was successfully elected to the West Virginia legislature in 1996, where she was named the minority chairwoman of the Health and Human Resources Committee and also served on the committees for the Judiciary, Banking and Insurance.

In Washington, Capito serves on the House Financial Services Committee, the House Transportation and Infrastructure Committee, and the House Select Committee on Energy Independence and Global Warming. The latter appointment, which came just two months ago, is of particular importance because West Virginia is one of the main producers of coal in the U.S.

Most recently, Capito voted "yes" on the reauthorization of the State Children's Health Insurance Program and applauded the passage of the legislation when President Obama signed it into law.

Capito has shown a strong concern for women's issues throughout her career on the Hill. As a member and former chairwoman of the Congressional Caucus for Women's Issues, she has worked to create bipartisan support for legislation concerning women's health, economic equity, education, domestic violence, child care, child support, sexual harassment and international women's issues. Capito has also supported stem-cell research funding throughout her career and is the only pro-choice representative from her state.

Past distinguished alumna award winners can be found here.

What Is the ‘4th Side’? END_OF_DOCUMENT_TOKEN_TO_BE_REPLACED