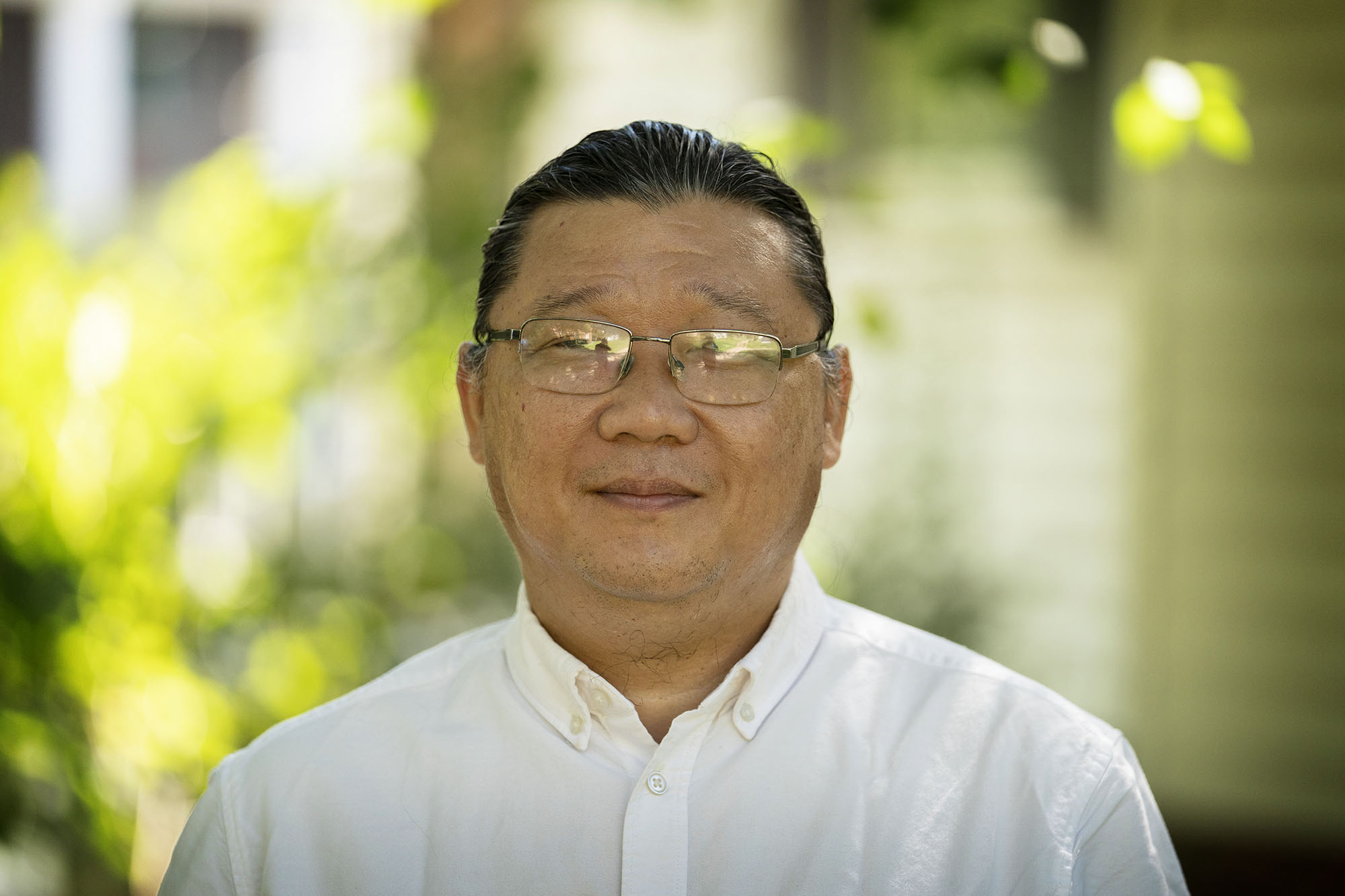 Myo Yan Naung Thein had to flee Myanmar in February after a military coup. (Photo by Dan Addison, University Communications)

In August, Myo Yan Naung Thein was looking forward to the start of classes at the University of Virginia and the opportunity to share his story and his hopes for his home country, Myanmar, through UVA’s Democracy Initiative.

Six months earlier, in February, Thein’s life looked quite different – and was very much in danger.

Myanmar’s military leaders seized control of the country on Feb. 1, capturing the its elected leader, Aung San Suu Kyi, of the National League for Democracy party, or NLD. Soldiers immediately began searching for other party leaders, including Thein, who has for decades fought for democracy in Myanmar (also known as Burma).

Thein is no stranger to persecution; he spent more than 10 years in prison as Myanmar seesawed between democratic and military rule. Still, he knew his life was in danger and that he could not help his country from a prison cell.

Soldiers surrounded Thein’s home soon after the coup, but he was away, having just attended his mother’s funeral. He went into hiding and began orchestrating protests even as he kept moving, staying one step ahead of those who sought to arrest him.

Thein eventually made contact with several groups, including the Free Burma Rangers, a humanitarian organization that works with pro-democracy groups in Myanmar, Iraq and Sudan. That group, with assistance from other supporters, staged a rescue operation, moving Thein and his wife from Myanmar’s former capital and largest city, Yangon, to the border and eventually smuggling him out the country.

It was a harrowing journey, Thein said, and the group was stopped at several checkpoints before and on the border with Thailand.

“I had changed my face and my wife had changed her face, so they did not notice us,” Thein said. “They let us go and we slept in the forest.”

At one point, soldiers again spotted the car they had been using and soon interrogated Thein and his wife again. Thein, still in disguise, told them that he was a merchant passing through from China, and the couple were once again allowed to leave. They crossed the border into Thailand and gathered with fellow insurgents, still working to aid those fighting military rule in Myanmar.

Still, they were not safe. Thein soon received threats, including confirmed intelligence that the military had sent agents and assassins after him. It was time to flee, again, this time to the United States.

The U.S. Embassy in Thailand helped Thein and his wife get emergency visas, and they were able to board a flight to America, carrying little more than the clothes on their backs and with no particular destination in mind.

That is where UVA came in.

Scholars in UVA’s Democracy Initiative, which studies challenges to democracy at home and abroad, had been keeping a close eye on events in Myanmar and soon heard of Thein’s plight.

Derek Brown is co-director of the Peace Appeal Foundation, which was helping Thein, and in the past had worked with the Humanitarian Collaborative Initiative at UVA’s Frank Batten School of Leadership and Public Policy. He began contacting faculty members to see if UVA could offer Thein any support.

“To a person, everyone wanted to figure this out,” said Stephen Parks, an associate professor of English who focuses on the role of public writing and rhetoric in supporting democratic struggles, particularly in the Middle East and South Asia. Parks has worked with human rights activists in those regions, building partnerships through writing and scholarship, and he chairs the Democracy Initiative’s Democratic Futures Working Group.

He quickly realized that UVA could provide the immediate support Thein required. As importantly, he also knew that Thein could give UVA students and faculty invaluable insight into events in Myanmar, and help students viscerally understand the hopes and fears that come with fighting for democracy.

“If we are going to study democracy, we need to see democracy as interlinked, connected to events playing out around the world,” Park said. “We immediately knew that having Myo Yan Naung Thein would be a really unique opportunity. We had so much respect for the knowledge and insights he could share. And I think we wanted to be scholars who use our resources to support those actually working for democracy.” 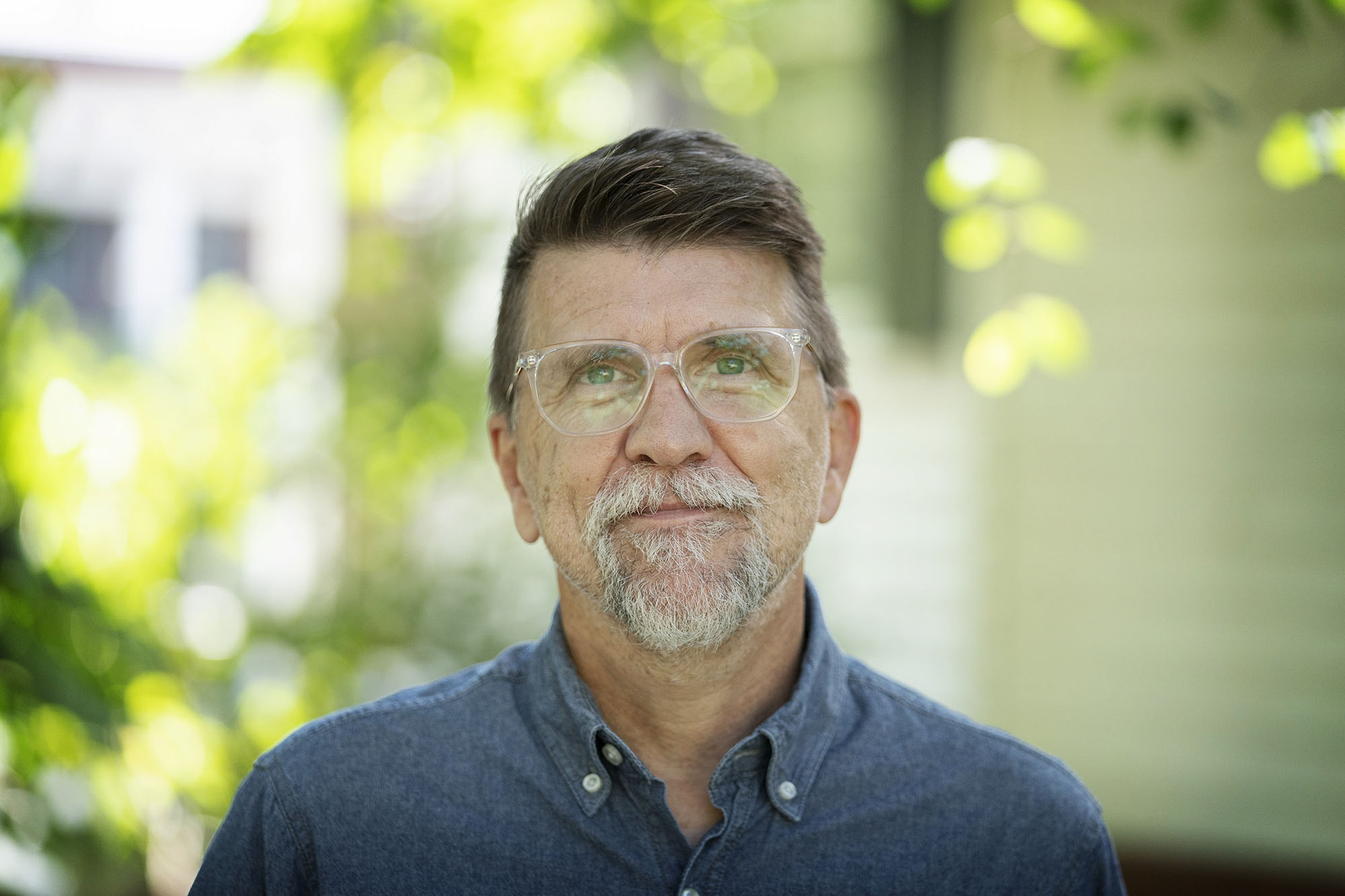 Associate Professor of English Stephen Parks is among those who helped Thein come to UVA. (Photo by Dan Addison, University Communications)

Working with Vice Provost for Global Affairs Stephen Mull, Democracy Initiative Co-Director Laurent Dubois, and English Department Chair John O’Brien, Parks was able to secure Thein a position as a visiting researcher in the Department of English, and to arrange housing for Thein and his wife.

“I’ve been at three other institutions where administrators would not even answer the phone for such a request,” Parks said. “But John, Steve and Laurent immediately understood the very direct role UVA could play in supporting democratic advocates. They immediately stepped up.”

The couple arrived in Charlottesville this summer and Thein is now a member of the Democracy’s Initiative’s Democratic Futures Working Group that brought him here. He is focusing specifically on scholarship around democracy in Myanmar, as well as making and maintain connections with fellow democratic activists around the world.

He will speak to students in Parks’ ENWR 2510 course, “Writing and Community Engagement,” and in assistant professor Tessa Farmer’s courses focused on Middle Eastern and South Asian languages and cultures. He also plans to hold a public talk, meet with UVA student leaders in small groups, and use some of his time at UVA to work on a memoir.

“I have a long history of involvement in the democracy struggle in Myanmar, and have been in and out of prison my whole life,” he said. “I have many memories of the struggles I took part in, and that I led. I would like to share my experience with international leaders and with readers.”

Even as he settles into life at UVA, Myanmar is never far from Thein’s thoughts. He worries constantly about his fellow citizens, who face potential violence from the government and sickness and death in the COVID-19 pandemic.

“People are struggling every day in Myanmar,” he said. “[The military] is using COVID-19 as a weapon, letting people die or letting people spread the virus, with medical care only for their supporters.

“We need to save our people … The world has a responsibility to protect the Myanmar citizens; they are global citizens.”

He hopes he can use his time at UVA to help democratic activists in Myanmar and in other countries seeking democratic rule.

“As a member of the working group, I am joining a team of academics and advocates researching the current state of democracy globally and struggles occurring globally, especially in countries such as Nigeria, Syria, and of course, Myanmar,” Thein said.

Parks said Thein will leave an indelible mark on the UVA students who interact with him. Parks has previously invited other global activists into his classrooms, including during a January term course, “Global Advocacy, Democracy and Public Narrative,” a course co-taught with Serbian activist Srdja Popovic.

“You can tell, when students meet someone fighting for democracy and hear their story, it is very powerful. It validates their hopes to connect their education to public work,” Parks said. “In our writing and rhetoric classrooms, we want to give students a chance to deeply engage with individuals locally and globally who have thought a lot about democracy and how Western and non-Western traditions can intermingle to create new forms of democracy. We want to provide models of how to use writing to imagine a more equitable future.

“The stakes, personal sacrifice and courage that it takes to do this work, and that Myo Yan Naung Thein has demonstrated, will have a tremendous ethical impact on students. It will demonstrate to students how they might use their own education to support efforts globally to expand the rights of those too often on the wrong side of privilege. It’s what we hope a UVA education stands for.”

Message from President Ryan Regarding Fatal Shooting on Grounds END_OF_DOCUMENT_TOKEN_TO_BE_REPLACED