Doctor in the House: A Thirst for Helping Others Drives UVA Swimmer 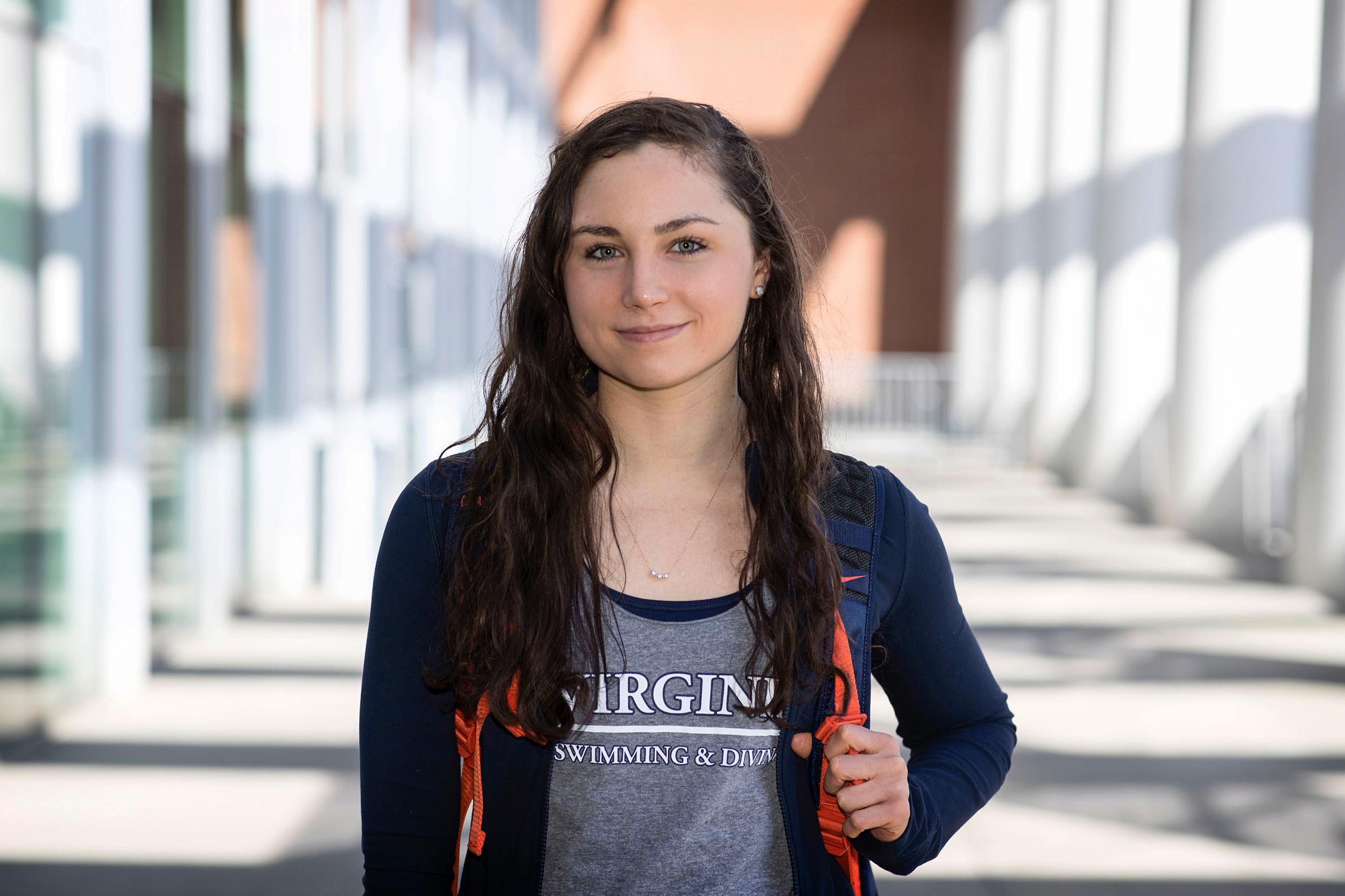 Scrubbing into surgery and watching her father’s orthopedics team make an incision into a patient’s hip didn’t make an 11-year-old Rachel Politi squeamish.

Politi was mesmerized by the methodical atmosphere of the operating room, where everyone played their role in an effort to help the patient.

Even so, Politi wasn’t 100 percent sure she wanted to follow in the footsteps of her father (an orthopedic surgeon) or her mother (a pediatrician).

But that changed when, just last year, the University of Virginia student took a cell biology course taught by professor Michael Wormington. It centered on biological processes that occur at the cellular level, and their connections to larger-scale processes and topics.

What Politi really liked is how Wormington presented each lesson like a story.

“My mind was blown every day,” Politi said. “I would be like, ‘Can you believe this!’ We talked about all sorts of real-life applications. That was the moment when I was like, ‘Yup, I definitely want to be a doctor.’”

Politi, a self-proclaimed “nerd” who has always loved school, is on her way to doing just that.

After graduating in May with a degree in biology, the Columbus, Ohio native will attend UVA’s School of Medicine.

Last month, the Atlantic Coast Conference awarded Politi, a captain of the UVA swimming and diving team, a 2019 Weaver-James-Corrigan Postgraduate Scholarship for her performance in the classroom and the pool.

“I was so honored,” Politi said. “To even go to UVA is an honor – I feel really lucky. And then to have been given this scholarship … it’s really humbling, because every day I’m around incredible people in my classes and on my team. Why do I deserve this? I just feel so lucky. It’s a really, really big honor.”

Politi nearly didn’t come to UVA. She had been considering a number of Big Ten schools – including hometown Ohio State – and the University of North Carolina. But then Politi decided at the last minute to take a visit to Charlottesville.

“The thing that stood out immediately was the family atmosphere here,” Politi recalled. “The people on the team felt like my teammates already. It was weird. I just remember feeling so comfortable here.

“Not to mention, walking around Grounds, you just get swept up in the beauty of it all.”

Four years later, she couldn’t be happier with her decision.

Politi’s face lit up as she brought up the news about President Jim Ryan’s implementation of a new living wage that had just popped up on her phone.

“Things like that, where we’re just taking into consideration the quality of life and happiness and well-being of every single person in this community, is something UVA does really well,” she said. “And to be part of that is really cool, to call yourself a member of that community.”

Having a concern for others’ well-being is what made Politi such an invaluable member of the swimming and diving team, according to head coach Todd DeSorbo.

“She’s the type of person who puts the team before herself in every instance and every sense,” he said. “Honestly, it’s probably to her detriment for her personal performance, but we preach that there is no individual greater than the team and she definitely is a great example of that.”

Before the recent ACC Championships in Greensboro, North Carolina, Politi – who had been dealing with shoulder pain throughout the season – went to DeSorbo and told him she wouldn’t be upset if he chose to give her spot in the lineup to another team member if that would be best for the team.

Politi wound up competing in the butterfly and the 200- and 400-meter individual medley for the ’Hoos, who took second place in the team standings. But the gesture was par for the course, according to teammate Vivian Tafuto.

“I think what really makes Rachel stand out as a leader to me is that she always leads by example as a teammate, student and friend,” Tafuto said. “There have been multiple times where the entire team is coming back from an away meet and all anyone really wants to do get in their car and go home. She’ll wait until everyone has a ride home and will offer to make multiple trips in order to ensure everyone gets home safe.

“She’s also not afraid to stand up for what’s right even if it isn’t a popular opinion, especially when it concerns the good of the team.”

Politi, an annual member of the ACC Academic Honor Roll, is the epitome of what DeSorbo says he looks for in a team member.

“She’ll lose sleep to help somebody else,” DeSorbo said. “She’ll stay up late to talk to a teammate to help them through a situation, even knowing that she’s got practice at 5:30 the next morning.

“She uses that time to be supportive – even if she knows it would affect her performance the next day.”

Politi didn’t qualify for the NCAA Championships, which begin Wednesday in Austin. Unfortunately, due to her academic schedule, she won’t be able to travel to Texas.

“As much as I love swimming and competing myself, I love cheering for my teammates even more,” she said. “I get so excited and almost nervous for them. It’s almost like I’m swimming their race with them, even when I’m on the sidelines.”

DeSorbo can’t wait to see how Polit’s next chapter unfolds.

“She’s going into the perfect field because she’s just good at helping people,” he said. “She’s going to make a great doctor.”