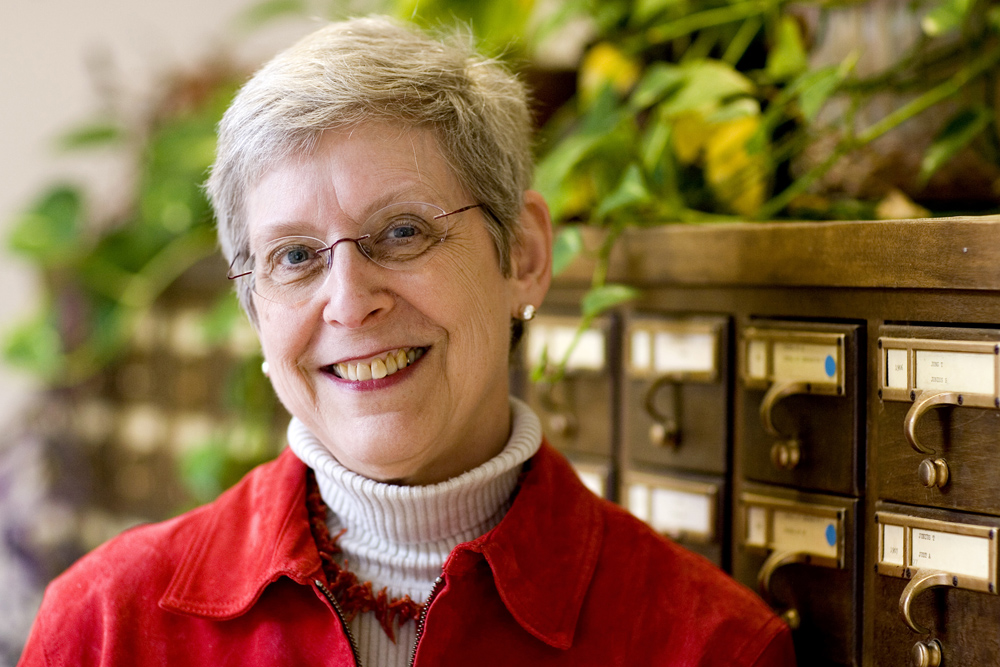 March 3, 2009 — Her office in the University of Virginia's Alderman Library is tiny and windowless, with barely room enough for two chairs. But cramped quarters can't limit Holly Shulman's expansive mind.

To talk with her is to be rocketed headlong into a rush of topics, ranging from the joys of poring over 250-year-old documents to the challenges of developing electronic tools for scholars and the general public to read those documents. A historian by training, Shulman is a documentary editor and visionary who brings an entrepreneurial spirit to her academic endeavors.

In 2007, she teamed with Sue Perdue to create Documents Compass, a nonprofit organization that helps scholars by providing the tools they need to put their works in an electronic format. At the time, Perdue served as senior associate editor of the Papers of Thomas Jefferson. The third principal member of Documents Compass is Susan Severtson, a publisher with more than 20 years in scholarly and, more recently, digital publishing.

As Shulman explained, scholars can know their documentary research inside and out, but may be overwhelmed by the challenges of adapting that work from print to the "complex, ever-changing environment" of the Internet. Doing so takes special expertise, careful planning, money and time. Those are precisely what Documents Compass offers its clients, helping them navigate the planning, fundraising, transcribing, proofreading, tagging and copy editing for digital documentary editions.

"We intend to be the midwife of your dreams," Shulman said. "We want to help other scholars make it happen as seamlessly as possible without their having to become experts themselves."

Affiliated with the Virginia Foundation for the Humanities, Documents Compass fits well with the foundation's larger effort to bring the humanities fully into Virginia's public life by making them more accessible in the digital realm.

According to Sheryl Hayes, the foundation's director of development, "We see Documents Compass as a service provider in the field of digital humanities. The printed book will probably never go away, but there is a growing demand for services like this."

The Collective Past Enters the Digital Age

After beginning operations in early 2008, Documents Compass has come out of the gates by winning two major grants to pursue projects intended to make historical documentary materials available in electronic form.

The first grant, awarded by the Andrew W. Mellon Foundation, provides $327,000 to explore the feasibility of creating People of the Founding Era, a biographical data source that will be the first electronic prosopography of the modern era. Unlike biography, which examines the life of a single person, prosoporaphy is the study of groups of people, with special attention given to their common characteristics and patterns of activity. This approach can be particularly useful for shedding light on the experiences of groups of individuals — for example, small farmers, artisans, free blacks and enslaved persons during the colonial period — who may be untraceable through more conventional biographical means.

"Prosopography will tell you something about who composes a group and how it became a force in history," Shulman explained. "Historians use prosopography as another tool in their bag."

With this support from the Mellon Foundation, Documents Compass will develop a database that includes native-born and naturalized Americans born between 1713 and 1815 as well as their children and grandchildren. By enabling scholars to study individuals and groups, People of the Founding Era will be an especially versatile research tool for better understanding America in the decades before, during and immediately after its founding.

A second grant awarded to Documents Compass also will give the public greater access to American history from the founding era.

In November, the National Historical Publications and Records Commission announced a new pilot project to digitize unpublished papers from the founding era. The project is the result of a report to the U.S. Congress by the Archivist of the United States on how to provide online access to those papers. As part of this project, the Virginia Foundation for the Humanities, on behalf of Documents Compass, received $250,000 to verify, encode and digitize the papers and develop a workflow to help scholars prepare their documentary editing projects.

In addition to these grant-sponsored initiatives, Documents Compass is assisting with other documentary edition projects, including the papers of Eliza Lucas Pinckney, an 18th-century South Carolina plantation manager, and the papers of American Revolutionary leader John Dickinson. The organization is also exploring with the Virginia Foundation for the Humanities and the Library of Virginia the prospect of doing a documentary edition of the secessionist state conventions.

Class of 2020: Memories and Moments From a Long-Anticipated Celebration END_OF_DOCUMENT_TOKEN_TO_BE_REPLACED