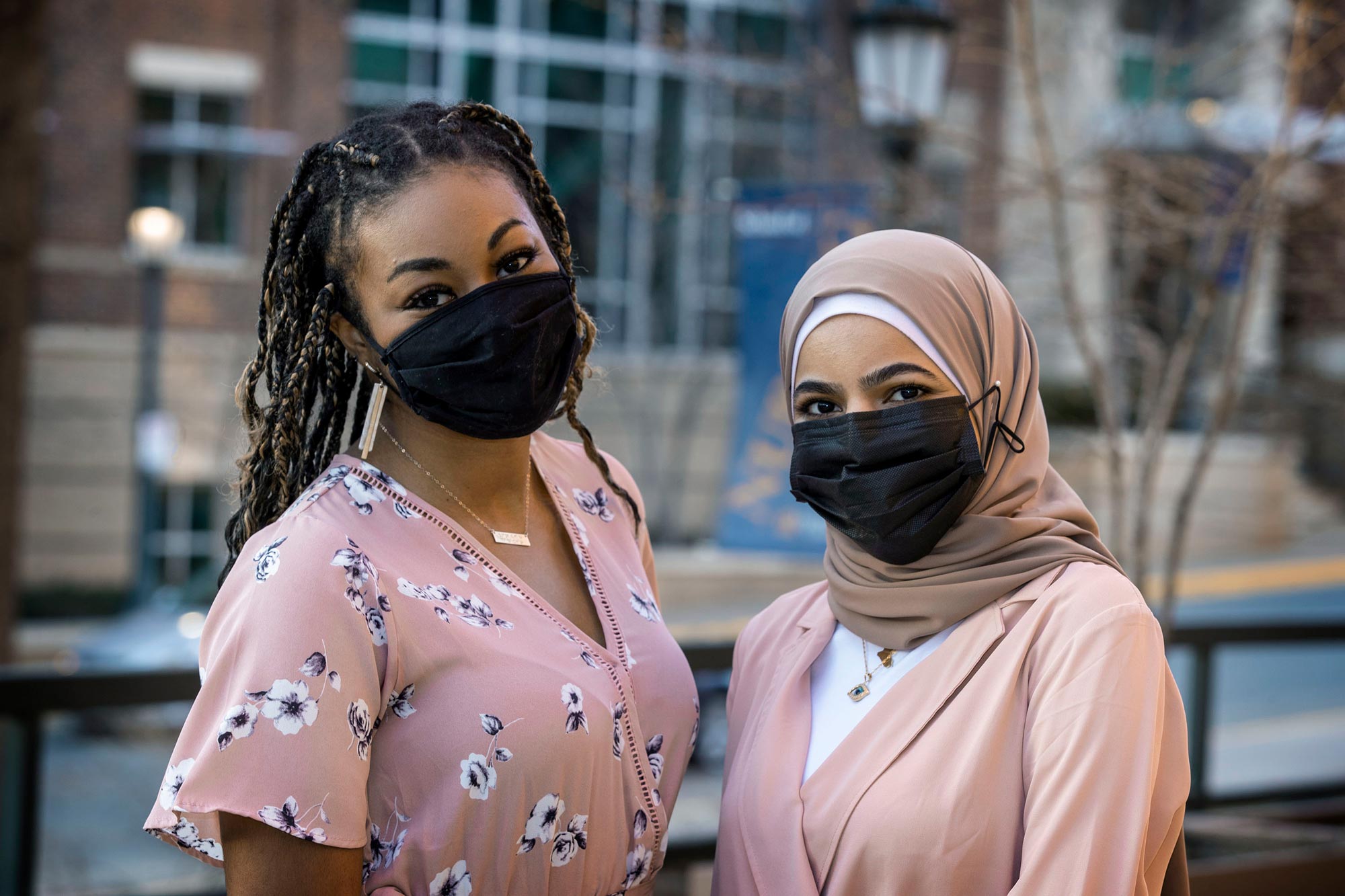 The brutal killing of George Floyd on a Minneapolis street on May 25, 2020, compelled a tsunami of grief and rage, igniting demonstrations around the world.

For University of Virginia students Milania Harris and Zahra Alisa, though, it also birthed a movement for nurses at a school and university still coming to grips with its history of exploitation, bigotry and inequality.

“Nurses need to acknowledge the history of discrimination within health care so they don’t continue these discriminatory patterns,” said Alisa, a third-year nursing student from Burke. “Our main goal is for people to come out of UVA nursing school aware of how to care of people of all types.”

But after an initial emotional virtual gathering with peers after Floyd’s death, Harris and Alisa perceived a familiar pattern among their peers and professors: the outrage, blunted by time, softened. Helplessness and inaction prevailed. The electricity of fury spurred by the latest round of Black Americans’ deaths, even in a community that suffered through the horror of a white supremacists’ rally on Aug. 11 and 12, 2017, and still isolated by a worldwide pandemic, had already begun to wane.

Heartsick, Harris and Alisa exchanged texts and held several intense, hours-long Zoom meetings together, drafting plans for a new student group with a sizable ambition: to feed learning and historical context, urge self-reflection and self-education, confront and remedy implicit bias, bigotry, racism, homophobia – and a host of other “-isms.” Advocates for Medical Equality was born.

“UVA played a direct role in both leading and perpetuating the bigotry and discrimination faced by different minority groups,” said Harris, of Chesterfield, “and although we can’t rewrite history, it’s UVA’s duty to actively work toward making things right. This history won’t just be forgotten and ignored.”

The students’ action plan was simple but expansive: teach nursing students about the history of discrimination in health care. Diversify their clinical experiences, readings and the simulations that inform their care. Create avenues for community outreach, hospital research and a mandatory class focused solely on equitable care across color, ability, gender identity and sexual orientation. And push white, heterosexual and cisgender students and faculty to educate and immerse themselves in these topics, rather than waiting for peers or even patients from minority backgrounds to teach them.

Advocates for Medical Equality’s early work aligned with four working groups formed at the school addressing racism, having difficult conversations, implicit bias, and urging inclusive topics and teaching. Fueled by Harris and Alisa’s vision, Advocates for Medical Equality members developed educational materials that were distributed to nursing students, faculty and staff through weekly “ABIs” – short for “anti-bigotry infographics” – beginning last fall through this winter. Each one offered a different topic to read, digest and reflect upon on subjects that were as powerful as they were difficult.

Racial disparities in maternal mortality. LGBTQ Awareness. Health care in prisons. Structural racism. A history of eugenicists at UVA. Their topics were bold, direct and laid bare the students’ vision.

Though established as a student group, Advocates for Medical Equality has been championed by a growing chorus of nursing faculty and senior-level administrators like Theresa Carroll, senior assistant dean for academic and student services, and Susan Kools, the associate dean for diversity and inclusion. Carroll – who nominated Harris and Alisa for the 2021 Dr. Martin Luther King Jr. UVA Health System Award, which they earned in late January with nine others – celebrated their use of the nursing school “as a platform for change.”

“Although it has taken many voices and many hands to create the results” sought, said Carroll in her nomination of Alisa and Harris, “they sowed the seeds.”

Even as Harris and Alisa – along with Advocates for Medical Equality student members and its committee chairs, Tatiana Buezo Flores, Nichole Heon, Megan Mawby and Paige O’Brien – plan to expand the organization’s post-pandemic reach, one of the most visible signs of their influence adorns a McLeod Hall wall, where it’s been since late last fall, surrounded by origami cranes created by nursing students and affirmed by more than a hundred signatures.

“We acknowledge our complicity in perpetuating the unfortunate history of medical inequality,” the banner reads, “and are working to build an environment of true inclusivity and cultural humility. UVA School of Nursing does not tolerate racism, homophobia, transphobia, ableism, or discrimination of any kind.”

The group hopes even more students and administrators will champion the cause, and are pushing the School of Nursing’s Inclusion, Diversity, and Excellence Achievement initiative to include paid student positions to truly support the intensity of the work.

“We’re doing this super out loud,” Harris said, “but we need others to be out loud with us, too.”

“You feel like you’re trying to end the whole history of systemic racism with a student group,” Alisa added, “but it’s also made me realize that starting small is OK. I’ve learned the merits of action plans and what they can accomplish. You don’t have to fix all the world’s problems to feel like you’ve done something.”