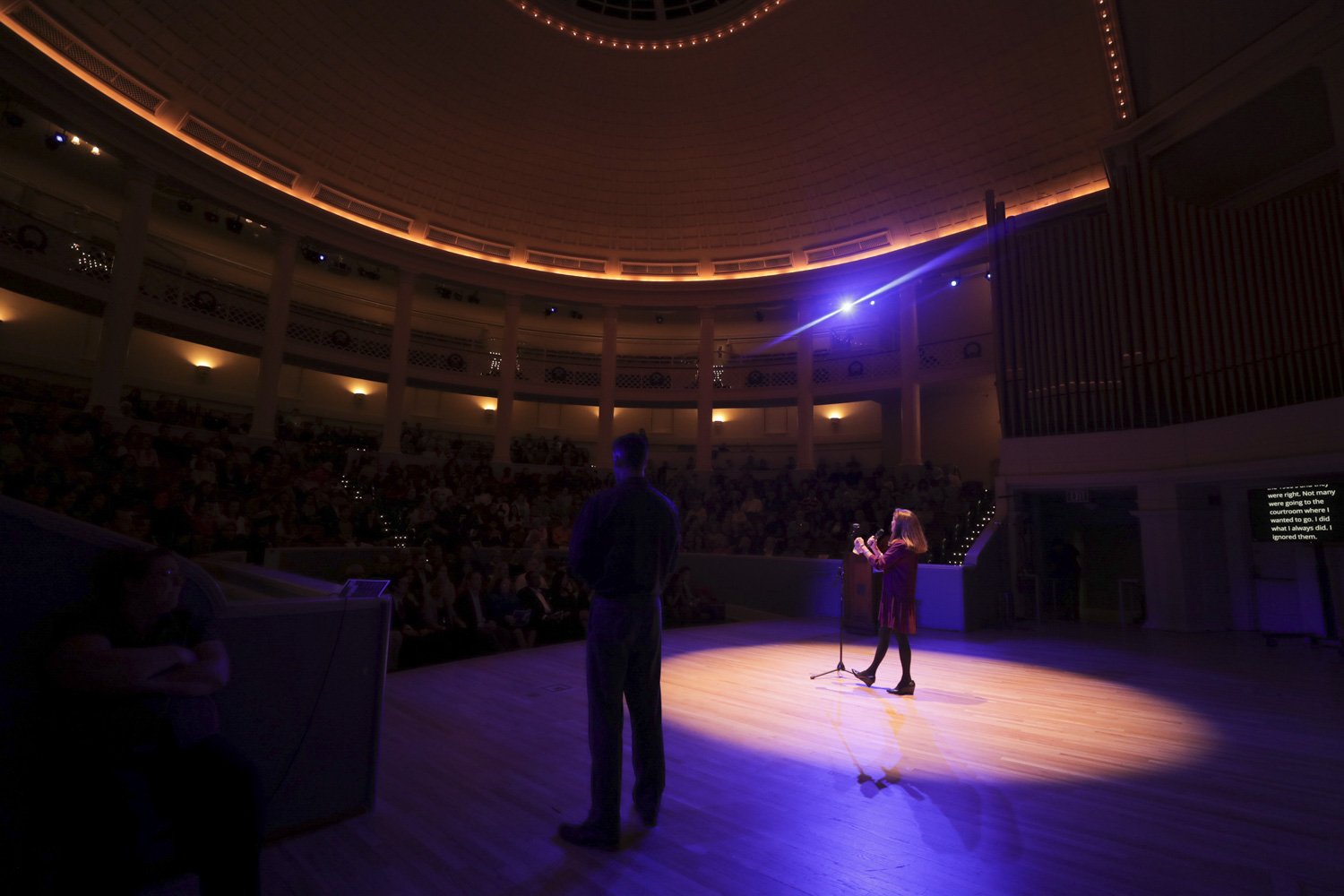 Sherri Moore, an assistant professor in the McIntire School of Commerce, prompted tears as she recounted the story of the death of her husband, when she was just 30 and four months away from delivering a baby.

One by one, 10 members of the University of Virginia community stepped up to a microphone on a dimly-lit stage Saturday afternoon to share deeply personal narratives at a special community storytelling event focused on building bridges, a theme of Jim Ryan’s presidency.

Coming a day after the pomp and circumstance of his swearing-in as UVA’s ninth president, “Double Take: Stories That Make You Think Twice,” filled seats in Old Cabell Hall.

One of the storytellers was George Thompson, who was born in Charlottesville just after the order to end segregation. It hadn’t been long ago that African-Americans were not allowed to enter the front door of UVA’s hospital and instead had to use a side door. Today, Thompson works at the front door of the medical center, where he is the lead greeter for patient guest services. He came to Double Take to share his experiences and memories of racism in Charlottesville. 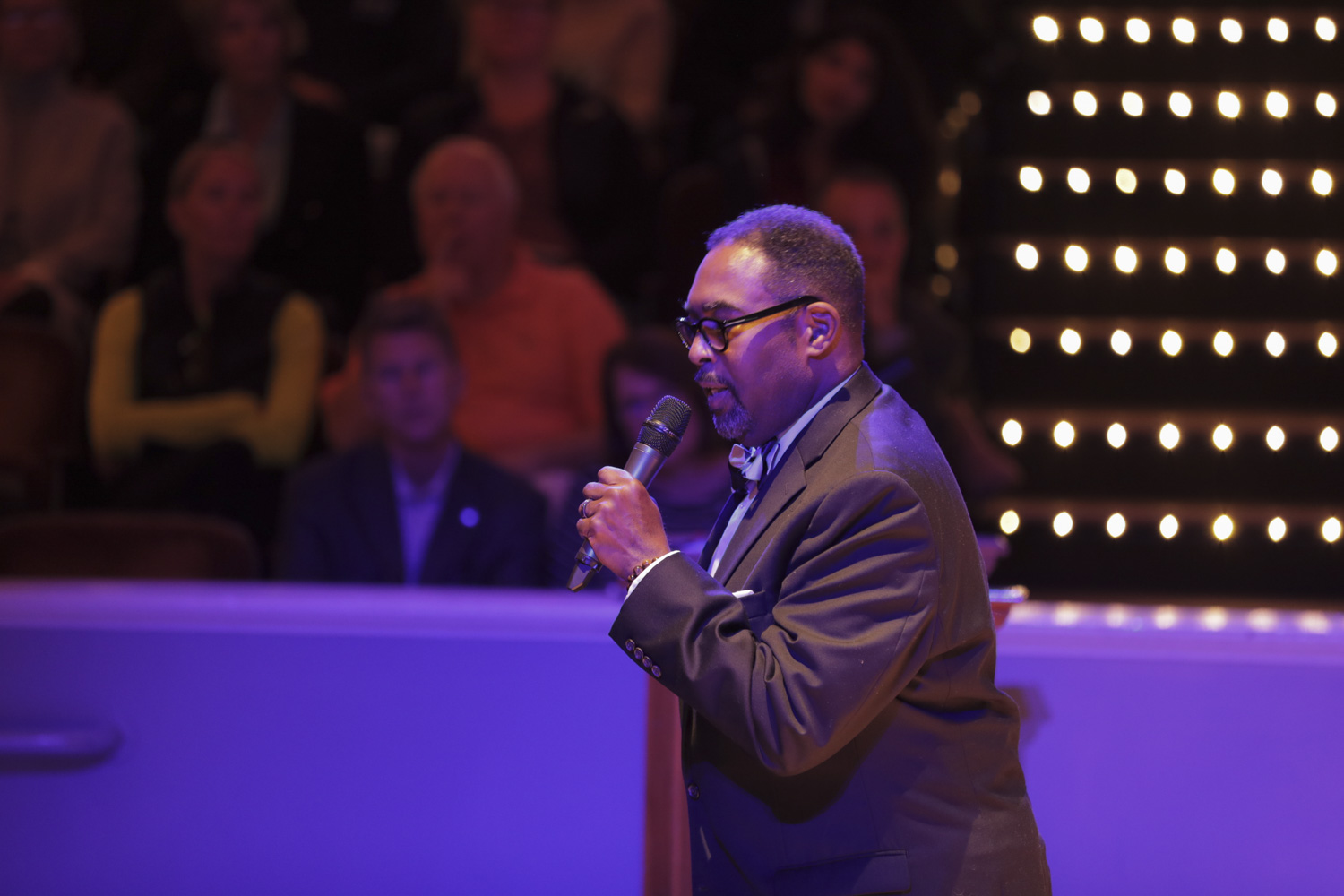 In his remarks, George Thompson called for unity in the wake of the events of August 11 and 12, 2017, which he said had opened wounds for many in the community. (Photo by Sanjay Suchak, University Communications)

Before desegregation, operating rooms were also segregated. In fact, Thompson’s mother underwent a procedure during this time and told her son that instead of the doctor doing the proper operation, he used her as a “laboratory person” for medical experimentation. To this day, his mother, who was in the audience, bears scars from that procedure, which are a constant reminder of her experience.

Thompson said in the late 1950s his older sister and her friends helped integrate Lane High School, which today houses the Albemarle County Office Building on McIntire Road. He said it was not a good experience.

When he was a young boy starting school, Thompson said he was bullied because of his race. “The slap in the face and the spit,” he said were indelibly ingrained in his memory. When he stuck up for himself, he said the principal called him to his office, “not because of what had happened to me, but because of what I had done.”

He recounted how he was forced to enter a side door and head to the balcony in movie theaters as a teen.

Turning to the horrible events of August 2017, Thompson said “to a lot of us, it was an event that opened wounds. It was bad. I commend this University for standing tall.”

“But we need to move forward. Racism, bigotry and hatred have no place anywhere,” he said to loud applause. “It takes each and every one one of you to make that change.”

The Challenges of Straddling the Hearing and Deaf Worlds

Katharine Harbury, a research assistant in the Papers of James Madison, a non-profit documentary editing project published by the University of Virginia Press, stepped into the stage’s spotlight next.

When she was in the second grade, Harbury said, she had an excellent teacher who helped put her on a path to success. Harbury is profoundly hearing impaired and her teacher worried that a third-grade teacher would not invest in Harbury’s learning, “so she taught me the third-grade curriculum while I was in second grade,” she said.

Harbury’s parents were also determined that their daughter’s hearing loss would be no excuse for not mastering English. “They treated me no differently from my siblings, knowing that I had to deal with the real world,” she said. “I am very fortunate to have these wonderful bridge-builders in my life.”

She invited Ryan and others to build bridges by learning two important concepts:

1) A person’s disability is part of that person but does not define that person.

“For example, I can read upside down and backwards. I can also write two words, one right side up to the right and one upside down to the left at the same time,” she said. “I happen to be an ambidexter, although that hasn’t made me rich!”

Still, challenges and hurdles have been part of her adult life. She said that although she can speak English and lip read, someone in the medical community automatically assumed that she used sign language and needed a professional interpreter for a doctor’s appointment. “A friend of mine nearly fell down on the floor laughing in disbelief at such ignorance,” Harbury said. 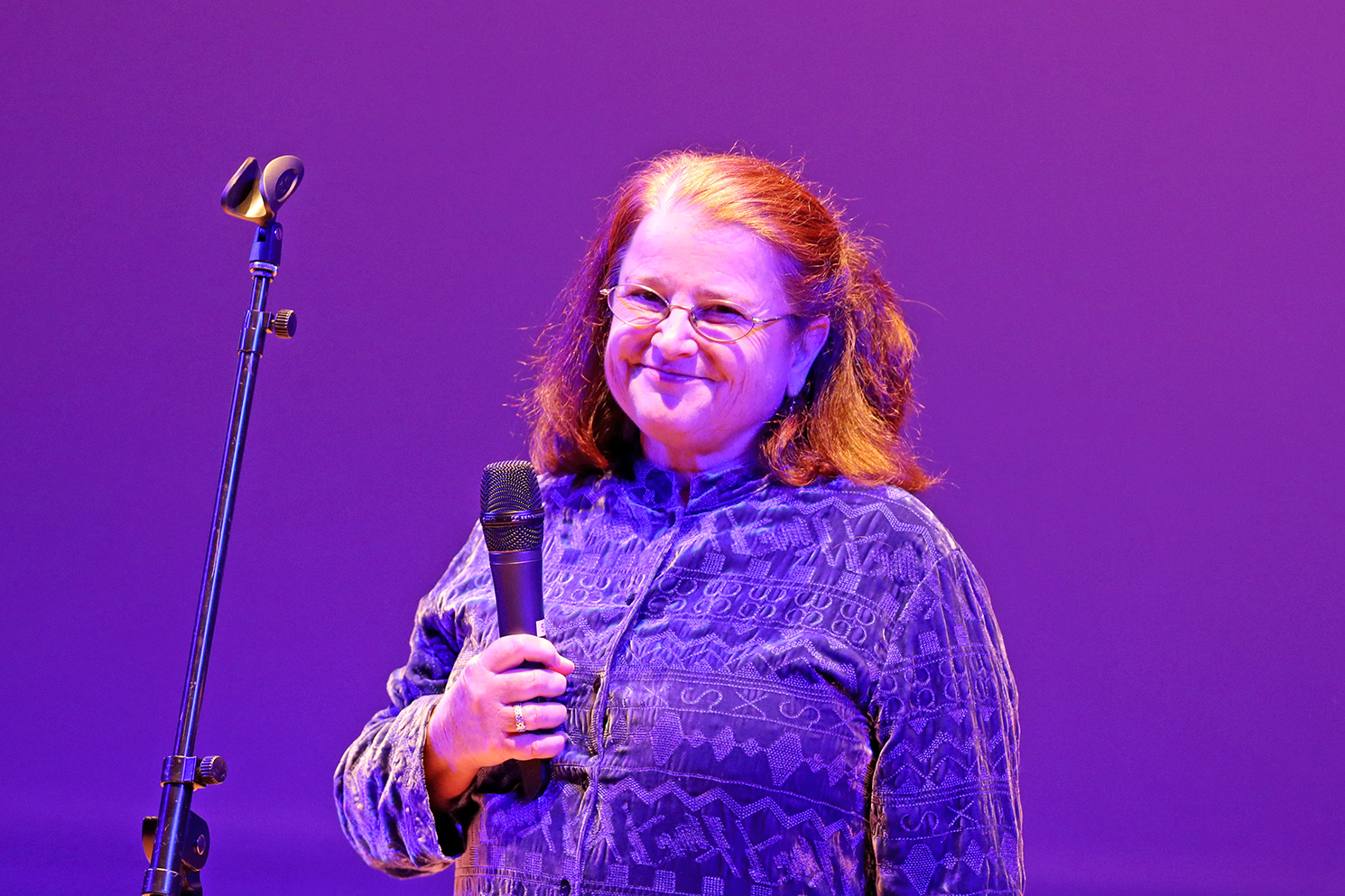 Years ago at a previous job, she said, a man jumped backwards instead of shaking her hand during an introduction. “He thought he might catch my hearing impairment,” she said in disbelief.

“A classmate in the 10th grade let me know I was not welcome on the first day of school by paying her brother a quarter to throw toilet paper all over me. I kept my cool, but my sister furiously slammed a quarter into his hand and asked him if he was proud of his quarter,” she recalled. “My sister, the feisty bridge-builder, is a legal aid attorney who currently works to protect the rights of immigrant children and refugees.”

Harbury said she’s even suffered in the deaf community. “After mastering a course in sign language for a play and winning the actress of the year award, my supervisor at work was angry instead of happy and the deaf community gave me a cold shoulder,” she said. “I betrayed their deaf culture by growing up a lip reader and speaker instead of signing.

“Here at UVA, I want to help President Ryan and others to build bridges. Eliminate ignorance, fear, assumptions, jealousy and stereotypes that happen to all of us,” she said in conclusion. “Teach acceptance, respect and tolerance. Be mentally curious and open-minded to all views.  That should be the norm, not the exception.”

Ryan closed out the program with the moving story of his adoption. Using his characteristic humor, Ryan said he’d always known he was adopted, “as long as I’ve known my name is Jim, or ‘Jimbo,’ as I was called as a kid,” or, adding to peals of laughter, “President Jimbo.”

He was just nine days old when his adoptive parents fetched him from the hospital.

His adoptive mother would tell him the story of that day. “And she said the nun walked into the room where they were waiting, and I was wearing an Irish, hand-knit sweater and a St. Christopher medal,” who is the patron saint of travelers. The nuns, not being allowed to reveal the name of Ryan’s birth mother, could only say that the items on the newborn “came from someone who loved you very much.” 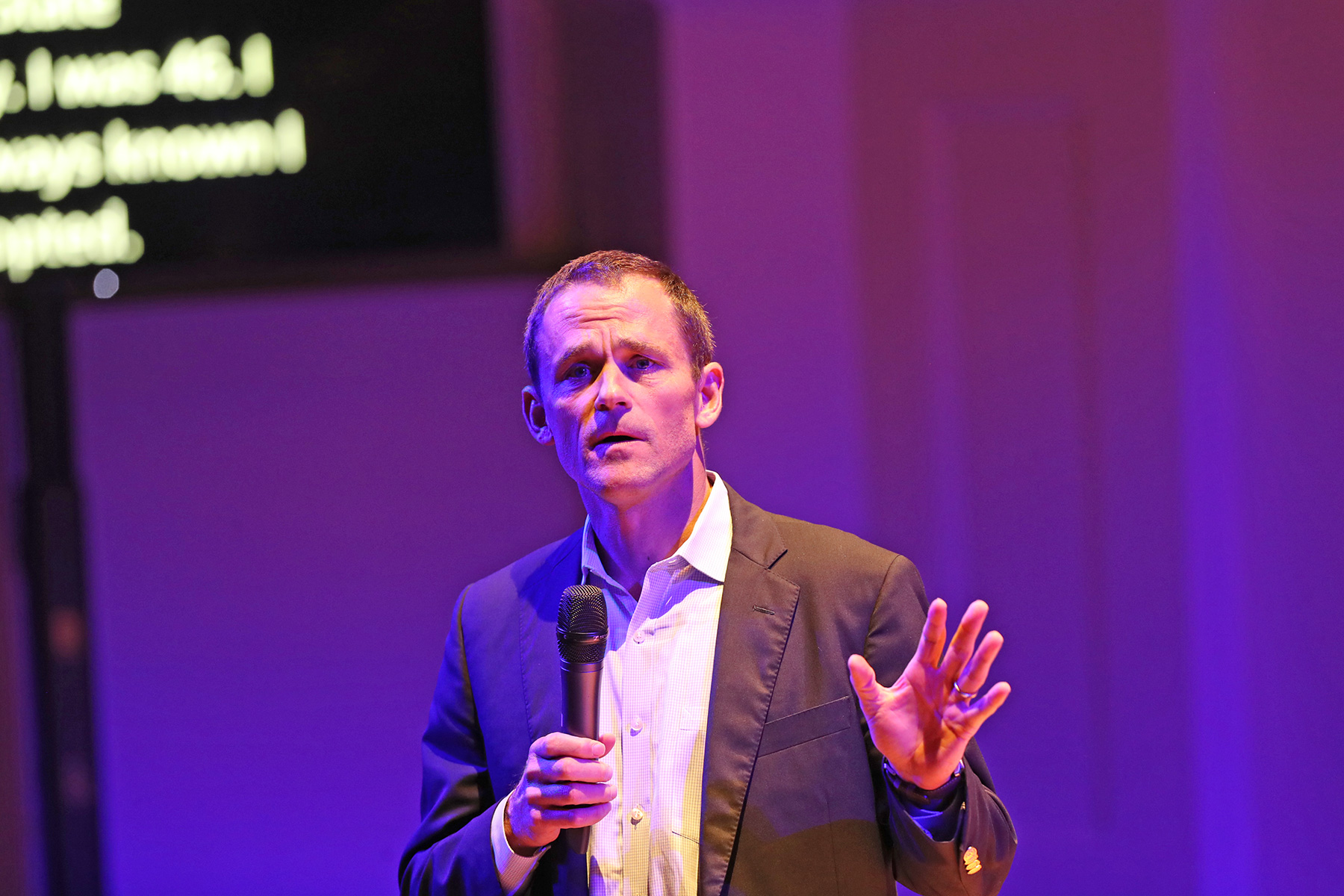 President Ryan used compassion, humor and wit to tell the story of his adoption. (Photo by Dan Addison, University Communications)

Ryan said because he’d had a wonderful childhood, with wonderful parents and “a sister who tolerated me most of the time,” he’d never been very curious about his birth parents.

That all changed about six years ago. Ryan’s adoptive parents had both passed away and a friend urged him to start looking for his biological parents. So Ryan reached out to Catholic Charities and learned quite a lot about his mother. “It turns out that my birth mother, Anne, grew up in Ireland, came to the United States and lived with and worked for a wealthy family in New York City. A letter from the charity said Anne (her last name was not shared) did not want to give Ryan up for adoption, but knew she could not afford to keep him. “I learned that she stayed in the hospital with me all nine days and fed me all of my meals,” Ryan said. “And I learned from the letter’s last line that she left the hospital broken-hearted.”

A final #ThankYouHaiku for Anne, my biological mother who I recently discovered.

New to my life, yet
my oldest life companion.
For me, I thank you. pic.twitter.com/Fla0Oa4C3z

The president said he showed the letter to his wife, Katie, who read it and with tears in her eyes urged Ryan to find his mother to let her know that he was OK. Coincidentally, a lady Ryan recalled was named “Barb,” later called him from Catholic Charities to report that they had found Anne. “It turns out my mother had married a wonderful man named Jack, had four additional children, had moved from New York to New Jersey, had lived most of their lives 15 minutes from where I grew up,” Ryan said.

He did call Anne, and he thanked her and told her he was OK. They made plans to meet at a rest stop on the Garden State Parkway, because Ryan’s family would be passing through on the way to Massachusetts, where he would be taking a job at Harvard. The Ryan family walked into the rest stop and Ryan said his children’s mouths “dropped open” when they saw Anne, “because there was no doubt that we were related.”

Since that time, Ryan and Anne have stayed in touch. In fact, Anne was in the audience Saturday, along with Ryan’s aunt, whom he has called the matriarch of his adoptive family.

“I will tell you, this is a bridge I never expected to cross,” he said in conclusion. “But it has enriched my life in so many ways and it’s one of the reasons I think building bridges is so important.”