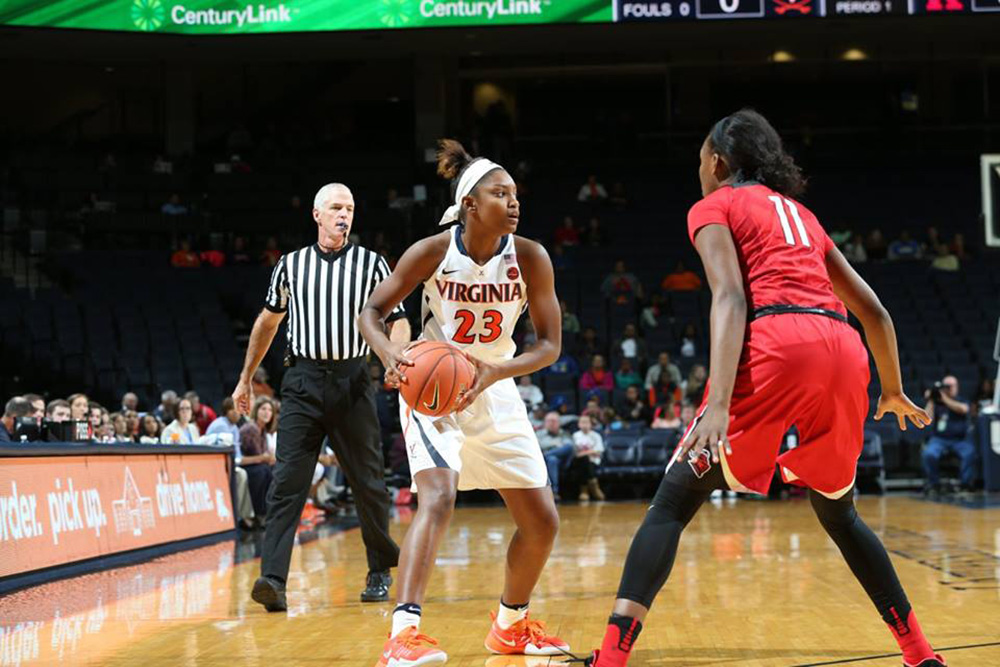 Third-year student Aliyah Huland El, a starter on the UVA women’s basketball team, has made steady progress on and off the court. (Photo by Matt Riley, UVA Athletics)

At the University of Virginia, final exams for the fall semester ended Friday, but most students finished well before then.

Not Aliyah Huland El. Her last exam, for an anatomy course, was set for Friday morning. Then she was ready to turn her attention to another test: that night’s basketball game at John Paul Jones Jones between UVA and the University of Illinois at Chicago.

She’s used to accepting – and conquering – challenges. A 6-foot-1 junior from Randolph, New Jersey, Huland El is the second-leading scorer for the Virginia women’s team. Off the court, she’s a kinesiology major with medical school in her future.

“She’s been on a mission since she got here, really,” said Adrien Harraway, UVA’s associate athletics director for student services. “She knew what she wanted to do, and she hasn’t deviated from it at all.”

Huland El is “very bright,” said Virginia head coach Joanne Boyle. “Even in the recruiting process, you knew that she was making decisions for the right reasons. That’s been stressed by her parents, but I think it’s just a part of who she is and her upbringing.”

From the start of their relationship, Boyle said, Huland El has “always wanted to be a pediatrician, and she’s never wavered on it. She’s been very strong and very secure. And so from day one, when she came in, she took the tough classes. She never backed away from it. She really challenged herself academically, and she hit it head-on and just tackled it.”

Huland El has sought the counsel of people in health-related fields, including Ed Howell, former vice president and chief executive offer of the UVA Medical Center. Howell is now a professor of public health sciences at UVA.

“I’ve talked to him about potentially shadowing different kinds of doctors, what I’m interested in doing, just the different careers in the hospital,” Huland El said.

There are no physicians in her immediate family, Huland El said, but she’s long aspired to a career in medicine. “It always kind of intrigued me how a doctor works,” she said. “What my pediatrician did, she really inspired me. And I love kids.”

She loves sports, too, and for three of her four years at Randolph High School, Huland El starred in basketball, volleyball and track & field.

“I was offered scholarships for all three sports, but basketball was my main love,” said Huland El, who holds Randolph High’s career records for points (2,286), rebounds (900), assists (450) and blocked shots (225).

During the recruiting process, she narrowed the list of the colleges she was considering to three: Virginia, Maryland and Princeton.

“It wasn’t a clear choice until I actually sat down and made a T-chart with my mom and dad,” recalled Huland El, whose father played basketball at Vermont.

“Maryland’s a lot more athletically driven, and Princeton is more academic. And I said, ‘You know what? I want the best of both worlds,’ and that’s obviously Virginia.”

She played in 31 games as a freshman, with one start, and averaged 5.6 points. But she shot only 24.7 percent from 3-point range and 33.3 percent overall.

Huland El’s accuracy improved in 2015-16, when she shot 32.7 percent from beyond the arc and 42.7 percent overall, and she averaged 9.6 points. But during a season in which she started 10 games, she totaled a team-high 94 turnovers and had only 46 assists.

She hadn’t necessarily expected immediate success as a college player, Huland El said, “but I did think the transition was going to be a little bit easier. Obviously it took a little bit of time, but that’s fine. I’m acclimated now, and I feel comfortable in the player that I am. I’m just playing with the team and taking what the defense gives me on offense and doing as well as I can on defense.”

In the most recent offseason, Huland El made cutting back on her turnovers a priority, and her ballhandling and decision-making have improved. Through eight games, she has nearly as many assists (18) as turnovers (20), and she’s averaging 10.6 points.

Among the other Cavaliers, only classmate Lauren Moses (13.6 points per game) has scored more, and Huland El is shooting 35.3 percent from 3-point range and 48.5 percent overall.

“She’s been putting time in off the court, and I think it’s a maturation process,” Boyle said. “She’s just comfortable in her game and in our system now. She can walk on the court and know what that all feels like, because she has that experience.”

Also, Boyle said, the coaching staff has a better grasp of Huland El’s strengths on the floor than when she entered the program. When she dribbles too much, Huland El can get in trouble, but she thrives as a catch-and-shoot specialist who can also finish on straight-line drives to the basket, and she has an excellent pull-up jump shot.

Huland El’s attitude has impressed the coaches, too.

“If you get on her about something, she walks in the next day, looks you in the eye, and she’s the same person. And as a coach – and I’ve said this to her before – I so appreciate that, because there’s some players that just can’t handle it. But she can look at herself and self-evaluate and take constructive criticism.”

Not long after the end of the 2015-16 academic year, Huland El was one of about a dozen student-athletes from the University – Moses was another – who took part in the first session of the UVA in Valencia summer program.

Starting in mid-May, approximately 150 students from UVA spent about a month studying in Spain, and each earned six credit hours for their classroom work in Valencia.

One of the two classes Huland El took was called “Medical Terminology,” and it was conducted in Spanish, a language she speaks fluently.

She took a similar course – in English – this semester. Her time at the University, Huland El, has for the most part “been a wonderful experience. It’s super-interdisciplinary for me. I’ve studied a lot of different things, looked into a lot of different things, taken religion courses, sociology courses, history courses, and I’ve kind of come around and realized that there’s a lot more to life than just basketball.”

“She’s dedicated,” Harraway said, “and she wants to [attend medical school]. I told her it was going to be difficult. I didn’t say it was not doable, at all, and she followed everything I advised her to do, by going to talk to certain people.”

Born and raised in Jersey, Huland El is a key part of a UVA team whose only senior is guard Breyana Mason. The Wahoos (6-2 going into Friday night’s game) have stumbled twice this season – losing to St. John’s on Nov. 25 and to Northwestern on Dec. 1 – but each time they responded with an emphatic win in the next game.

“We’ve made it a big deal to learn from our mistakes, and we understand that basketball’s a game of redemption,” Huland El said. “You can’t necessarily make a mistake and wallow in the mistake. You’ve got to get up, pick yourself up by the bootstraps and fix it and learn from it.”

The Cavaliers have considerably more height this season than they did in 2015-16, and the team chemistry is much improved too, players and coaches say.

“I think it’s clear to see everyone is really excited,” Huland El said, “and everyone wants to help each other to make the team better.”