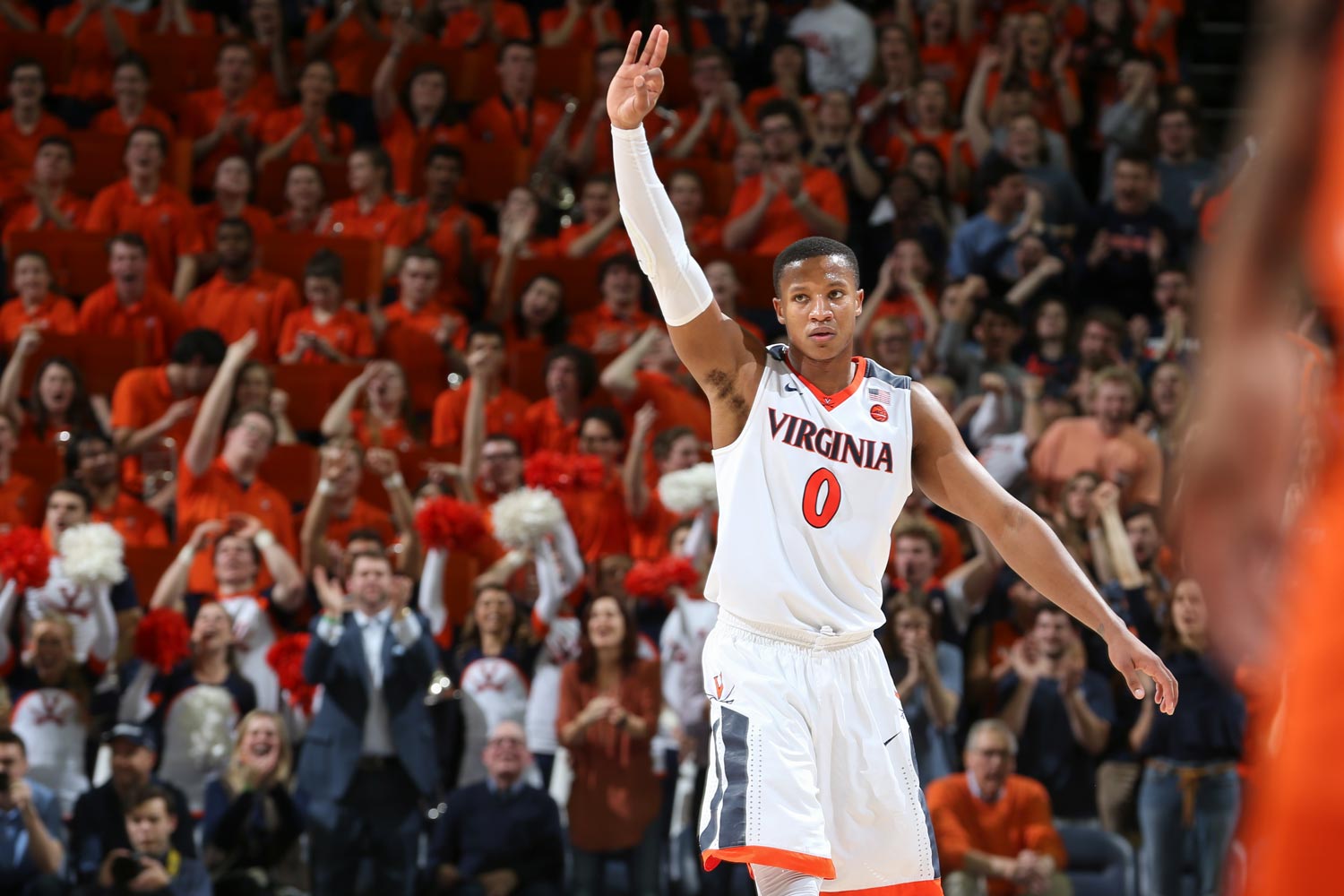 By the time the NBA draft arrives on Thursday night, Devon Hall will have auditioned for nearly two-thirds of the league’s 30 teams.

After his third or fourth workout, Hall reminded himself to enjoy the process, however exhausting it might be, “because where else would I want to be right now in my life?” the former University of Virginia guard said.

And so he’s grateful “every single day,” Hall said recently. “These are the opportunities of a lifetime, and I’m super blessed to be able to do all these. I’m flying around the country, working out for different teams. It’s definitely a grind, but I’m enjoying it.”

During his five seasons at UVA – Hall redshirted in 2013-14 – he transformed himself from a seldom-used reserve to an All-ACC performer. In 2017-18, when the Wahoos swept the conference’s regular-season and tournament titles, Hall served as a team captain and made the All-ACC second team, the ACC’s all-defensive team and the All-ACC academic team.

Hall, who turns 23 next month, left the University with two degrees: a bachelor’s and a master’s.

“It’s a product of his work ethic,” Jason Williford, UVA’s associate head coach, said. “The kid works as hard as anybody I’ve been around. So I’m happy for him, proud of him, and got my fingers crossed that his name gets called.”

Two recent mock drafts have Hall going late in the second round. SI.com projected Hall to New Orleans with the 51st pick, and ESPN had him bound for Dallas with the 54th pick.

Williford’s scouting report on Hall? “Two-way player. Can make shots. Can defend. Can guard multiple positions. And he’s a high-character guy. You won’t have any issues with that.”

Hall, who started his final 88 games as a Cavalier, has spent much of the past two months playing in front of pro scouts: in April at the Portsmouth Invitational Tournament, in May at the NBA combine in Chicago, and more recently in workouts for NBA teams.

“You’re pretty much in a different city every other day,” Hall said from Dallas, where he’d worked out for the Mavericks, whose head coach is former UVA guard Rick Carlisle.

“You just go in and compete,” Hall said. “Every single one is a competitive setting. Sometimes you’re tired going into workouts. I remember when I was in Memphis – that was my 11th one, and I was just exhausted. But you gotta go in with the right mindset and push through all that stuff.” 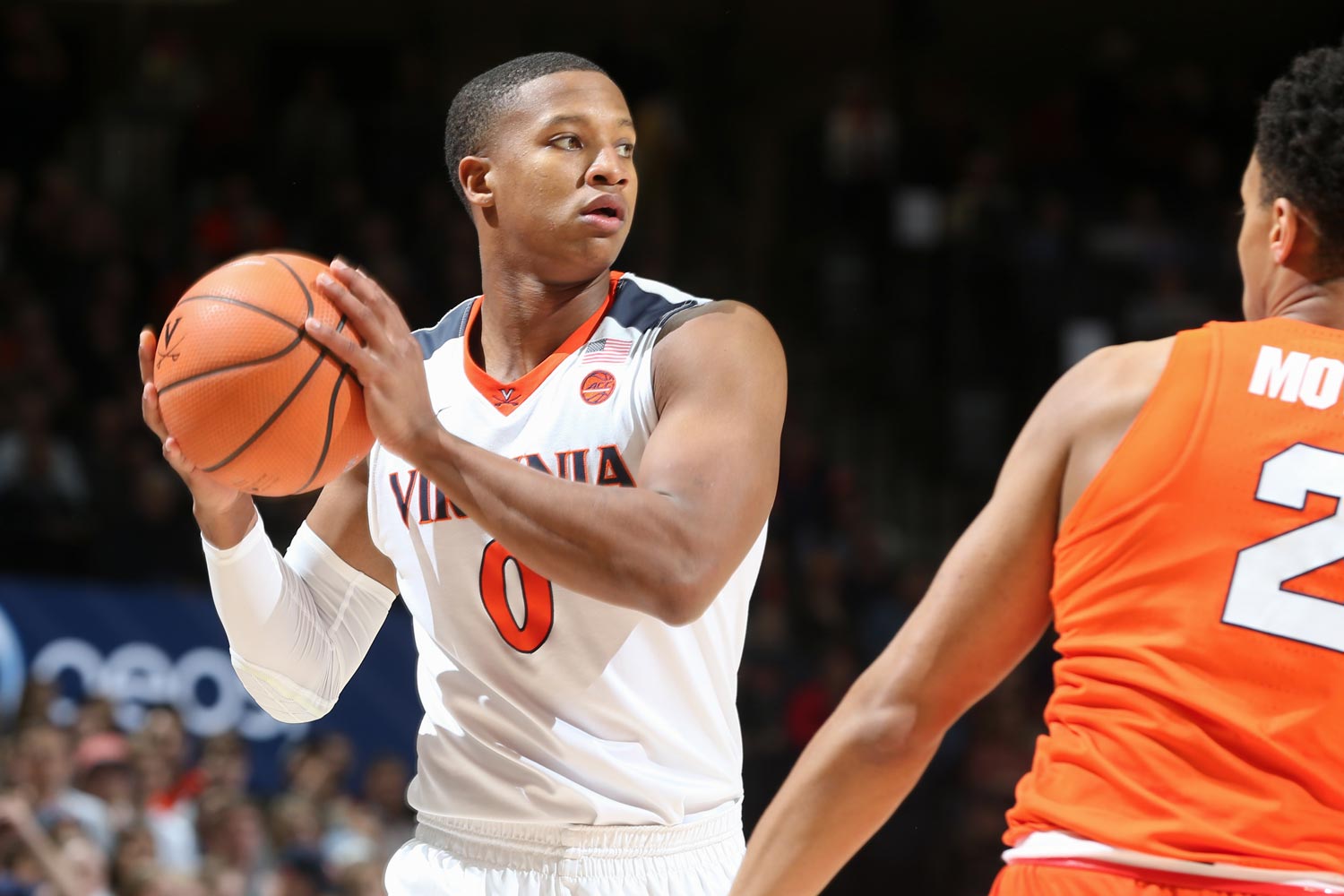 At the Portsmouth Invitational Tournament, not far from his hometown of Virginia Beach, where he starred at Cape Henry Collegiate, Hall made the all-tournament team, after which ESPN.com labeled him a “potential draft sleeper.”

At the NBA combine, Hall measured 6-foot-6 in shoes, with a wingspan of approximately 6-8, and weighed in at 206 pounds. That’s excellent size for an NBA shooting guard, and Hall is coming off a stellar 2017-18 season.

“He’s made himself into a really complete player who’s won a lot,” UVA head coach Tony Bennett said, “and I think he has the physical body, the size, that [NBA teams] like.”

In a league dominated by such superstars as LeBron James, James Harden, Kevin Durant, Russell Westbrook and Stephen Curry, many other NBA players have specific roles, Bennett pointed out, and that could help Hall create a niche for himself.

“He just finds ways to contribute,” said Bennett, a former NBA guard. “He understands what it means to fit and play a role, whatever’s required of him.”

“He took on a bigger role every year,” Bennett said. “He is the model – one of the best I’ve seen – at being patient and [willing to accept] delayed gratification. Not instant gratification.

“It was little by little. I’m sure he had his doubts, but he stuck with it. I think he’s more the exception than the norm in today’s culture of instant gratification.”

Williford said: “There were always flashes. He had size for the position, and he was an athletic kid. He just kept working. Got his body right, got his shot right, and I think it was more or less [a matter of] getting his mentality to where he was consistently confident.”

Hall said he never lost confidence in himself, even when he didn’t have a prominent role for UVA on the court.

“I think that your mindset has to be fixed a certain way, knowing that if something doesn’t work out the way you expect it to right away, then there’s got to be another step,” Hall said. “The steps have to be consistent, and that’s how I was, wanting to grind, grind, grind and keep getting better.”

To an NBA team seeking information about Hall, Bennett said he would “always start with the character piece, and he’s as good as it gets that way.”

Hall said he’s spoken to all of them except Scott, who preceded him at UVA, about life in the NBA.

“It’s helped,” Hall said. “I asked for advice going into this process, and what they told me is, the main thing is to compete. The [NBA teams] know what you can do. Don’t worry about being perfect. Just go in and play as hard as possible. That’s what I’m doing, as well as trying to knock down shots and be effective on the defensive end and show I’m versatile enough to guard multiple positions.”

At the heart of Bennett’s coaching philosophy is an unwavering commitment to defense. The countless hours Hall spent at that end of the court during practices at JPJ continue to pay dividends as he tries to impress NBA scouts.

“For sure, I think it translates well,” said Hall, who’s living in Atlanta as he trains for the draft. “All the closeouts, all the positioning, knowing to be vocal [on defense]. With communicating, you can really set yourself apart. If you can communicate, you make up for a lot of mistakes.

“Being in a good spot to be successful on the floor on the defensive end has helped me, and Coach Bennett has definitely helped me. Some guys just don’t have that [defensive background].”

Like Hall, Brogdon spent five seasons in Bennett’s program at UVA. The Bucks drafted Brogdon early in the second round in June 2016, and he was named the NBA’s rookie of the year 12 months later.

Brogdon was 23 when he entered the NBA, considerably older than many of his fellow rookies. Hall may benefit from the success such players as Brogdon and former Villanova star Josh Hart – both of whom completed their college careers – have had in the NBA.

“I think having a guy who’s seasoned, who knows the game well, has experience and has the physical tools, is definitely helpful,” Hall said. “The transition isn’t so much [as with] an 18- or 19-year-old kid.”

The 2017-18 team was Bennett’s ninth at UVA, and he has to replace three seniors: Hall, forward Isaiah Wilkins and guard Nigel Johnson. Still, such players as Kyle Guy, Ty Jerome, Jack Salt, De’Andre Hunter, Mamadi Diakite and Jay Huff return, and the Cavaliers are expected to again rank among the nation’s best teams.

Hall will miss playing at JPJ, but he looks forward to watching the ’Hoos next season.

“They definitely have the right pieces to be successful,” he said.

A Year We Will Never Forget: 2019-20 in Review END_OF_DOCUMENT_TOKEN_TO_BE_REPLACED

‘What Will You Carry With You?’ Remarks From UVA President Jim Ryan END_OF_DOCUMENT_TOKEN_TO_BE_REPLACED