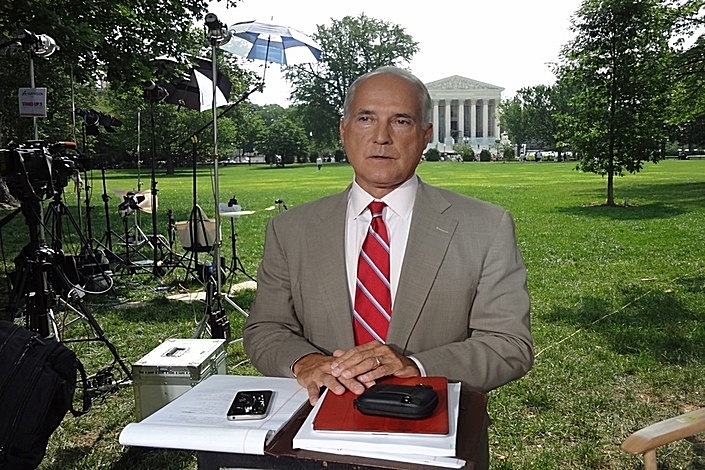 Wyatt Andrews, an award-winning journalist who covered presidential campaigns, the U.S. Supreme Court, the first Gulf War and historic summit meetings between the United States and the Soviet Union during his 34-year career with CBS News, is joining the faculty of the University of Virginia’s Department of Media Studies.

A 1974 graduate of the University, Andrews retired from CBS News last month and is joining the College and Graduate School of Arts & Sciences next spring as a professor of practice. He is the first faculty member within the Department of Media Studies to hold that title, a University appointment reserved for distinguished professionals who have been recognized internationally or nationally for contributions to their field.

Andrews will teach courses on the news media, journalism ethics and multimedia news reporting. In addition to teaching, he will assist in fundraising efforts for the College and the Department of Media Studies while mentoring U.Va. students interested in following his career path into broadcast journalism.

Andrews shared in the Columbia/DuPont Silver Baton Award presented to “CBS Evening News” in 2014 for its coverage of the mass shootings at Sandy Hook Elementary School in Newtown, Connecticut. He also won three Emmy Awards during his CBS career for his coverage of the 1984 assassination of Indian Prime Minister Indira Gandhi, the 1986 Reagan-Gorbachev summit in Reykjavik, Iceland and the 2003 Washington, D.C. sniper case. Most recently, Andrews specialized in covering health care and veterans affairs for CBS News.

“I consider teaching at U.Va. to be a dream job, and I am both honored by and grateful for the opportunity,” said Andrews, who graduated, with honors, with a bachelor’s degree in foreign affairs. “My role within the media studies department will be to help our students better analyze the revolution transforming the news media and, in time, to assist the next generation of U.Va. writers and reporters to navigate and shape that revolution.”

Hector Amaya, who chairs the Department of Media Studies, said that Andrews’ extraordinary career as a national correspondent will strengthen the department’s offerings in journalism, broadcasting and multimedia news reporting.

Five years ago, 20 U.Va. students graduated with bachelor’s degrees in media studies. This spring, according to Amaya, the department is scheduled to graduate 201 media studies majors. With 328 undergraduates currently majoring in the discipline, the interdisciplinary media studies major ranks as the fifth-largest in the College, behind biology, economics, foreign affairs and psychology.

The College does not offer a major specifically related to journalism. However, Andrews will offer his students insight into the skill set that he developed over the course of his career in broadcast journalism, Amaya said, while emphasizing the importance of the liberal arts education that prepared him to cover a variety of high-profile beats.

“With Wyatt, we will have someone who can regularly teach on the practices and craft of journalism, which is a tough profession but that continues to be one of the most important professions in a democracy,” Amaya said. “We have students who want to work as journalists after graduating, and it’s great to have someone who has reported at the highest levels of the field to teach our students. Not only will Wyatt teach them the craft of journalism, but also its ethics, how decisions are made in the newsroom, and the challenges that new production technologies are bringing to issues of ethics and journalistic objectivity.”

Andrews will join the faculty in the spring. Among the courses he will teach will be a survey course offering students an overview of news production and of how to analyze the news they consume in the contemporary market. Andrews also will teach an upper-level course on media ethics as well as two “practice of media” courses preparing students to put together news stories for broadcast and online distribution.

Andrews has long been a mentor to U.Va. students aspiring to follow him into broadcast journalism. As a student, he was news director and then station president of WUVA, a student-run radio station, and he returns every semester to run a training workshop at the station.

“When I started at WUVA, I was thrilled that someone of his caliber was coming down here and taking the time to share his insight and experience with us,” said Sharpe, who plans to pursue a career in TV news production. “He’s been a great resource and mentor, and having him here has been incredibly motivating for those of us who think they want to do this for a living.”

Jenna Dagenhart, a reporter for Charlottesville’s NBC affiliate, WVIR, first met Andrews at a career panel in 2011 when she was a U.Va. student. As she pursued a master’s degree at Columbia University’s Graduate School of Journalism, Dagenhart shadowed Andrews on his reporting assignments as a CBS News intern. She says that no matter how busy he was on his own assignments, Andrews never failed to carve out time to answer her calls for advice on how to prepare for her own interviews or on how to craft the script for her reports. She continues to count him as one of her most important mentors in the competitive field of broadcast journalism.

“I had no idea I wanted to be a journalist until I met Wyatt. His passion for journalism is just contagious, and his commitment to getting it right is reflected in his work,” said Dagenart, who graduated in 2013 with a bachelor’s degree in media studies. “It thrills me to know that Wyatt will be teaching and mentoring young journalists at U.Va. We owe a lot to him.”

Andrews started his broadcast career in 1974 as a reporter for WTVR in Richmond. He went on to work as a local news reporter for WFTV in Orlando (1977-79) and with WPLG in Miami (1979-81), where he won a local Emmy Award for his reports on the exodus of Haitian refugees and a second Emmy, as well as the Sigma Delta Chi Award, for his series on the 1980 crime wave in Miami.

From there, Andrews went on to join CBS News and was promoted to national correspondent in 1991 after serving as White House correspondent during President George H.W. Bush’s administration, as Moscow correspondent and bureau chief and as a reporter in CBS’ Tokyo bureau. He also served as the CBS News Supreme Court correspondent from 2003 to 2009 and was the principal reporter for the “Eye on America” segment for the “CBS Evening News.”

A Year We Will Never Forget: 2019-20 in Review END_OF_DOCUMENT_TOKEN_TO_BE_REPLACED

‘What Will You Carry With You?’ Remarks From UVA President Jim Ryan END_OF_DOCUMENT_TOKEN_TO_BE_REPLACED