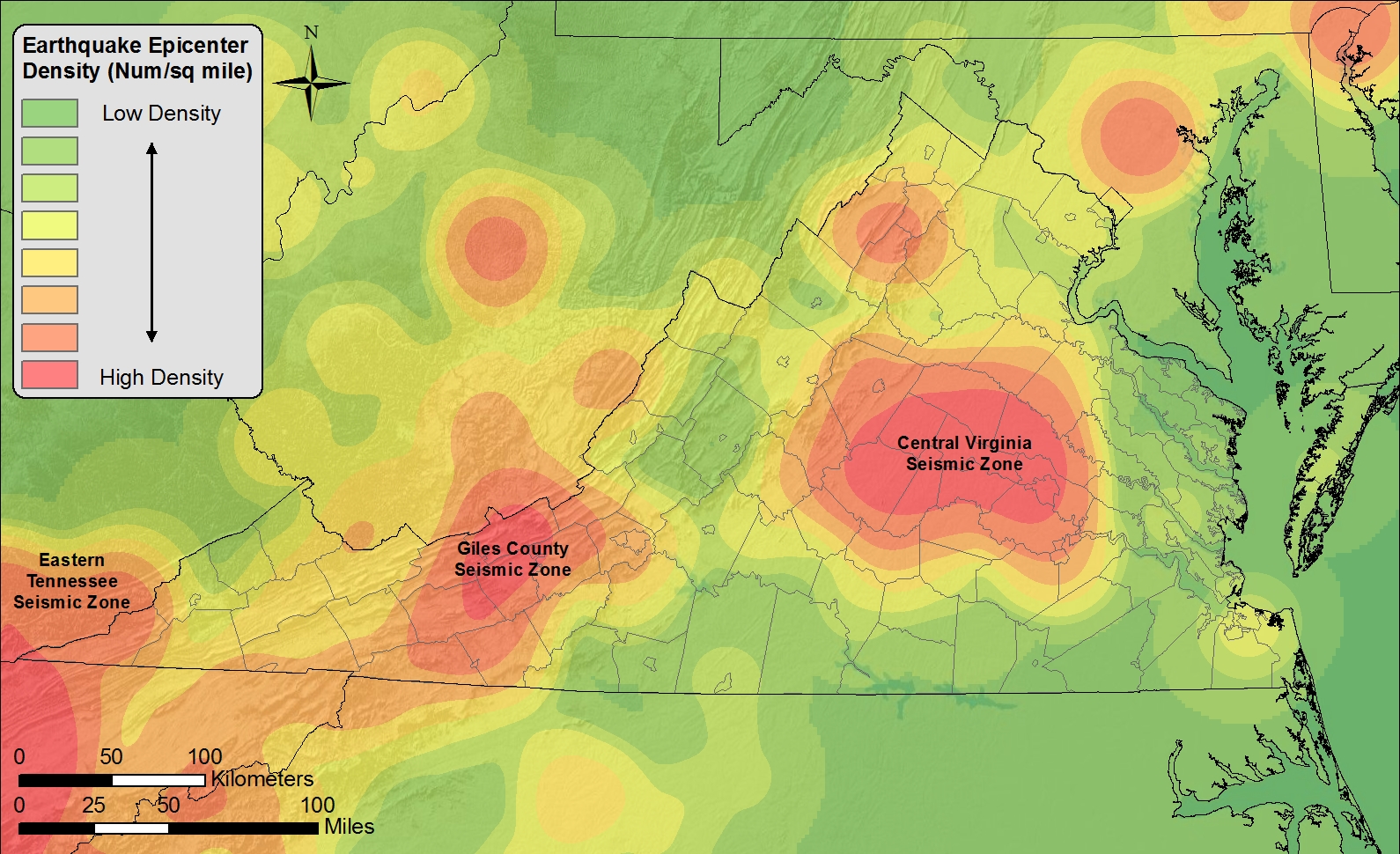 The 5.8 magnitude earthquake that struck the commonwealth in 2011 was a wake-up call for many Virginians. Originating deep under Louisa County, the quake was felt as far north as Canada and caused significant structural damage around the state.

Today, earthquakes pose an even greater risk to the commonwealth as the population density and development continue to increase.

In the latest edition of the Weldon Cooper Center for Public Service’s Virginia News Letter, geologists Wendy Kelly and Anne Witt explain how the state is preparing for the next quake.

“Prior to 2011, we didn’t have a comprehensive database to identify the faults where earthquakes originated,” Witt said.

The authors work with the Virginia Department of Mines, Minerals and Energy’s Division of Geology and Mineral Resources, which is currently evaluating the state’s seismic history and compiling a geodatabase of geologic faults within its borders.

“It’s going to be the first all-inclusive detailed database of fault lines in Virginia,” Witt said. “We have a basic map, but those are very generalized faults for the entire state. This will be taking all the data we have, historical and modern, and compiling it all.”

Many of Virginia’s faults are still considered “blind,” hidden underground without surface evidence to indicate their location, so turning to historical earthquake data is one of the few ways geologists can map their location.

“We still don’t know very much about earthquakes in the eastern U.S.. We have a lot more to learn about these seismic zones and why they even exist,” Kelly said. “Identifying faults is easier in the West because the landscape is younger and the faults can be more apparent.”

By combing through historic data in written records and geologic indicators of prehistoric earthquakes, scientists have been able to identify three major “seismic zones” where many earthquakes appear to originate in Virginia.

The Central Virginia Seismic Zone stretches from Richmond to Charlottesville and encompasses much of the Piedmont. Other smaller hot spots can be found in the New River Valley within the Giles County Seismic Zone, and along the southwestern border in the Eastern Tennessee Seismic Zone.

Making better maps of these areas is not only important to Virginia, but also for the United States as a whole. Geologists across the country can use the data to better understand why earthquakes like the one in 2011 are felt so far afield.

“It seems that these eastern-originating earthquakes tend to ring the entire East Coast like a bell,” Witt said.

In the case of the 2011 earthquake, scientists knew it originated in the Central Virginia Seismic Zone, but it didn’t line up with any previously mapped faults.

“In 2011, we thought we had pretty good mapping of where two major faults ran through the Central Virginia zone, and that earthquake actually occurred between them,” Virginia State Geologist David Spear said.

In order to better understand these seismic zones and their related hazards, the Division of Geology and Mineral Resources is participating in a project funded by the Federal Emergency Management Agency and the Virginia Department of Emergency Management. Together they will assess the commonwealth’s seismic risks by overlaying their geodatabase of faults with population and infrastructure maps.

Using that risk assessment data, the Division of Geology and Mineral Resources is working with the 12 Virginia planning district commissions that fall inside the seismic zones to create strategies for mitigating loss.

Anthropogenic seismicity, or quakes that are induced by human activity, is becoming more of a concern in the eastern U.S. A few instances of induced seismicity related to coal mining have been recorded in Southwestern Virginia, but other industrial activities such as deep well injection and reservoir construction have triggered seismic events elsewhere in the country and world.

Although severe earthquakes are relatively infrequent in Virginia, seismic-related risks will increase as the population and infrastructure expand. Historic seismic data and real-time monitoring will be crucial tools for the state’s emergency readiness.

“It’s really important to stress that this is a work in progress, because so many faults are yet to be discovered,” Kelly said. “With time we hope to identify more faults and have better data to provide to state and local planners.”

Monkeypox Is Spreading, But University’s Risk Believed To Be Low END_OF_DOCUMENT_TOKEN_TO_BE_REPLACED

Q&A: Assessing the Risks and Rewards of Pelosi’s Plan to Visit Taiwan END_OF_DOCUMENT_TOKEN_TO_BE_REPLACED

These Giant Wind Turbines, Inspired by Palm Trees, May Be the Future of Renewable Energy END_OF_DOCUMENT_TOKEN_TO_BE_REPLACED