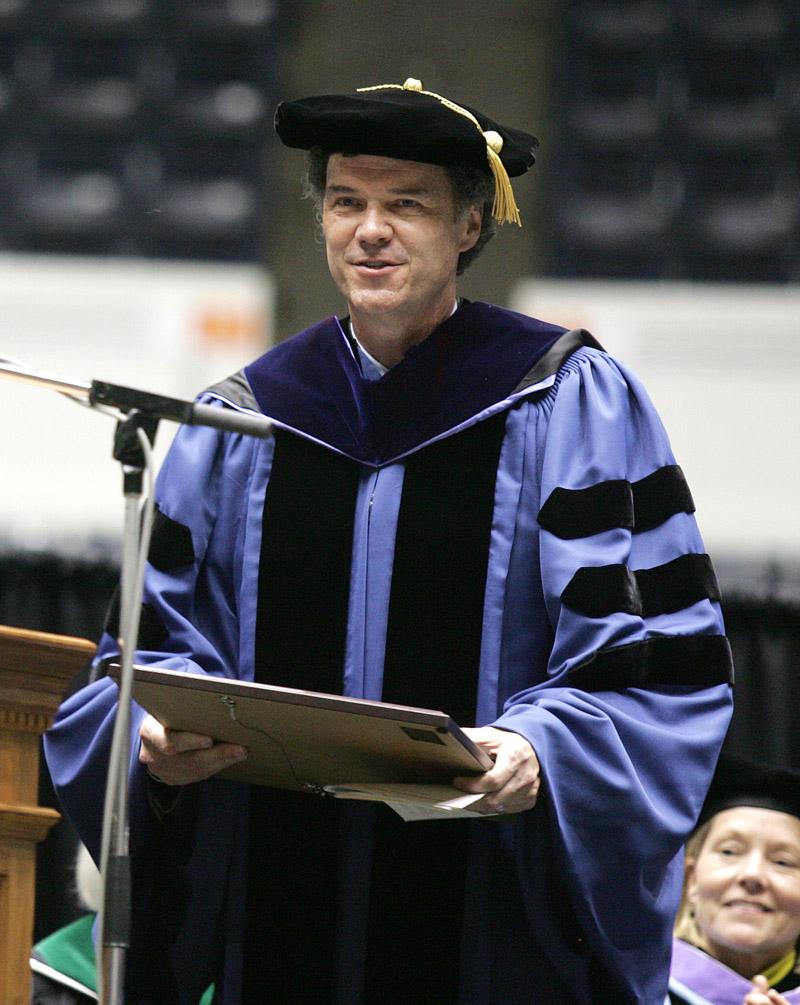 Oct. 20, 2006 -- Edward L. Ayers, dean of the College and Graduate School of Arts and Sciences and the Hugh P. Kelly Professor of History at the University of Virginia, received the University’s highest honor, the Thomas Jefferson Award, during Fall Convocation today.

Ayers is the 53rd winner of the award, which has been given annually since 1955 to a member of the University community who has exemplified in character, work and influence the principles and ideals of Jefferson, and thus advanced the objectives for which he founded the University.

The Thomas Jefferson Award presentation was part of Convocation ceremonies in University Hall that included recognizing third-year U.Va. students who had earned intermediate honors and a keynote address by William B. Harvey, vice president and chief officer for diversity and equity.

“Since his arrival at the University 26 years ago, Ed Ayers has been recognized as one of the institution's most skilled and inspiring teachers,” said Casteen. “Students talk about his captivating lecture style and his gift for storytelling. Whether leading small seminars or teaching large lectures, he engages his students and mentors them.

“As dean of the College and Graduate School of Arts and Sciences, Ed has devoted his keen intellect, his masterful storytelling and his ebullient personality to the service of faculty, students and alumni. Now he is marshalling their energies to revitalize the built environment and the academic promise of the College.”

A member of the University of Virginia faculty since 1980, Ayers has been honored for both his teaching and his scholarship. In November 2003, he was named the National Professor of the Year for doctoral and research universities by the Carnegie Foundation for the Advancement of Teaching and the Council for Advancement and Support of Education.

He has also won the Outstanding Faculty Award from the State Council of Higher Education in Virginia and the 2002 James Harvey Robinson Award from the American Historical Association for the best aid to the teaching of history.

Ayers has written or edited nine books for which he has earned numerous awards. “Vengeance and Justice: Crime and Punishment in the Nineteenth-Century American South” (1984) won the J. Willard Hurst Prize for best book in American legal history. “The Promise of the New South: Life After Reconstruction” (1992), a finalist for both the National Book Award and the Pulitzer Prize, was named the best book on the history of American race relations by the Organization of American Historians. “In the Presence of Mine Enemies, War in the Heart of America 1859-1863,” which was published in 2003 by W.W. Norton and Company, received the 2004 Bancroft Prize for a distinguished book in American history and the American Historical Association’s Albert J. Beveridge Award for the best English-language book on the history of the United States, Canada or Latin America from 1492 to the present.

That book is based on “The Valley of the Shadow: Two Communities in the American Civil War,” a digital media project that Ayers conceived. The World Wide Web version of the project has attracted more than 4 million visitors. The web and CD-ROM version, published by W. W. Norton and Company in 2000, won the first annual eLincoln Prize for best digital work on the era of the American Civil War. The Valley Project is used in classrooms at all levels throughout the country and makes available thousands of original sources for students and scholars to conduct their own research and draw their own conclusions about history.

President Clinton appointed Ayers to the National Council on the Humanities in 2000. Ayers has been a fellow at the Center for Advanced Study in the Behavioral Sciences, Palo Alto (1999-2000), and has served as the Fulbright Commission’s John Adams Professor of American Studies, University of Groningen, The Netherlands (1995). He was named to the Board of the Council on Library and Information Resources (2002) and to the Board for the National Council for History Education (2003).

Ayers received his doctorate in American studies from Yale in 1980 and joined the U.Va. faculty that year. He has been dean of the College and Graduate School of Arts & Sciences since 2001.