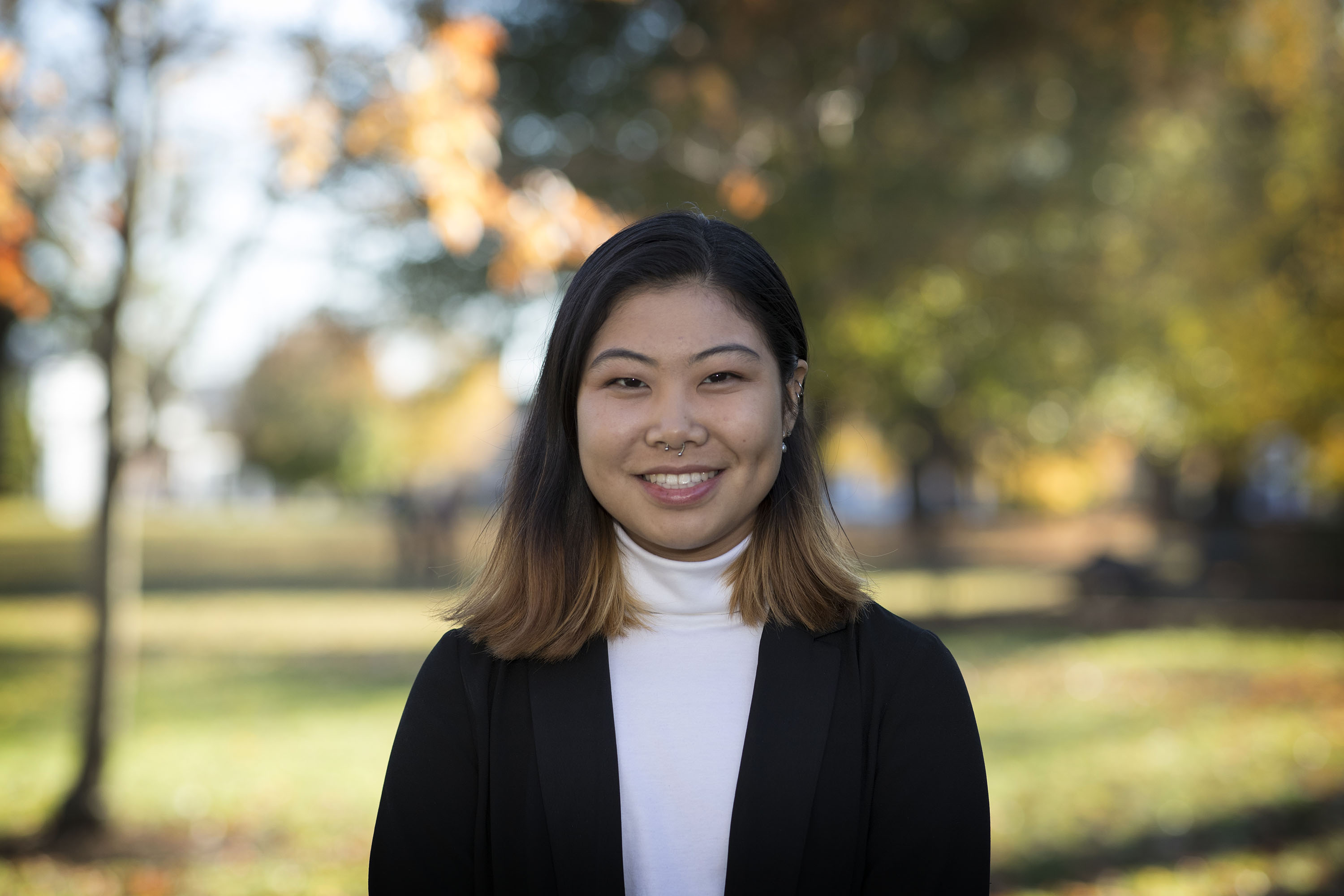 University of Virginia student Eileen Zijia Ying of Clarksville, Maryland, will continue her studies at Oxford University next fall as a Rhodes Scholar, the selection committee announced Saturday.

Ying, a fourth-year honors politics and English (modern and global studies) major, will pursue Master of Studies degrees in world literatures in English and in women’s studies.

Rhodes Scholarships, created in 1902 by the will of Cecil Rhodes, fund all expenses for two or three years of study at the University of Oxford in the United Kingdom.

“The MSt in world literatures in English will allow me to explore global Anglophone literature, or texts written in English but produced in former British colonies,” she said. “Much of the critical race scholarship with which I’m familiar looks at race and coloniality from a distinctly American perspective. And while this has been immensely fruitful, I’m also interested in the insights that a more expansive view would bring. With its history of violence and imperialism in India, China, Hong Kong and Malaysia, the United Kingdom serves as a unique case study in Asian postcoloniality.

“The MSt in women’s studies, on the other hand, will serve as a theoretical bedrock, a space where I can engage more seriously with gender and sexuality before enrolling in a Ph.D. program in the United States. I’m excited for the opportunity to study with scholars at Oxford whose work I admire, and to take what I learn not as a given, but as something amenable to critique.”

Ying’s current work lies at the intersection of Asian diasporic speculative fiction, queerness and biopolitics, exploring questions that are fundamentally human, she said, adding that she finds hope and inspiration in the genre.

“Speculative fiction offers special insight into alienated and racialized subjects, especially when we read it analogically,” Ying said. “Unlike conventional immigrant narratives, which gesture toward assimilation, belonging and wholeness, speculative works tend to dwell in discomfort and estrangement. Quaint suburbs are replaced by urban wastelands, hermetic family dramas forced open by the looming threat of late-capitalist destruction and environmental devastation. I’m interested not only in how this shift queers the Asian diasporic subject and unsettles ‘consensus reality,’ but also in how it offers alternative imaginings for the future.”

Ying notes that her academic and political work has been centered on the U.S. She has studied Asian American history and literature and organized around distinctly American issues of race and space.

“Yet this is precisely why an education at Oxford sounds promising to me,” Ying said. “I work in fields where connections, for the most part, have not yet been drawn between the two regions. I want to begin to forge these links. When we speak about ‘race’ in the U.S., we are almost always operating on place-specific assumptions. And though this is not always necessarily a problem, it does become suspect when the topic at hand – in my case, speculative fictions, global capital flows, and 21st-century migrations – is transnational in nature.”

Ying’s eventual goal is to pursue a Ph.D. in English.

“I want to be the kind of writer and teacher that I wish I had growing up,” Ying said. “I want to raise issues of race and class and gender in the classroom, to develop lectures and seminars that cater to young queers of color and create a space for reflection and self-discovery in addition to intellectual pursuit.”

She is also interested in exploring issues of university administration and activism among professors.

“I have a host of political commitments that cannot be contained within scholarly work,” she said. “I’ll be doing as much local, anti-racist, anti-capitalist organizing as I can outside of my career.”

Ying said she was surprised at receiving the scholarship, but said that for a variety of reasons, her UVA experience prepared her for the Rhodes Scholarship selection process.

“I’m used to being asked pointed questions in class,” Ying said. “I’m used to advocating for myself. I’m used to speaking up. So when I walked into the reception and interviews, it was as if I had done it all before.”

The current Martin Purcell Family Jefferson Scholar, Ying has improved the University community in many ways. Among these contributions, she co-founded and now serves as editor-in-chief for the Virginia Review of Politics; designed and taught an undergraduate course on the history of Asian American activism; and chaired the Young Democratic Socialists at UVA.

“I want to be the kind of writer and teacher that I wish I had growing up. I want to raise issues of race and class and gender in the classroom, to develop lectures and seminars that cater to young queers of color and create a space for reflection and self-discovery in addition to intellectual pursuit.”

Mrinalini Chakravorty, an associate professor of English, director of undergraduate studies and director of modern and global studies, called Ying the most brilliant student she has ever taught. She said Ying is widely and uniformly esteemed by her professors. Ying enrolled in Chakravorty’s upper-division literature course, “The Queer Novel,” in the autumn of 2018.

“She is as gifted a writer as she is quick-witted, articulate and learned,” Chakravorty said. “I have never been as impressed with the seriousness and talent of an undergraduate student as I was with Eileen’s performance in this course.”

Chakravorty is also impressed with Ying as a person.

“Eileen is uniquely calm and self-possessed,” she said. “She has an openness and sincerity to her that makes her a favorite of her peers. I have observed that she draws people to her because she is so unstintingly reliable and kind and generous in attitude. She is beloved by her teachers, colleagues and her students because she so consistently dazzles with her insight, even as she remains sensitive to other perspectives and open to humor. She’s an avid reader whose vast knowledge, especially of literature, cultural studies and political philosophy, is quite remarkable and not constrained by her own identifications alone.”

“Eileen is passionate in her commitment to social justice and particularly good at connecting the diverse communities with which she identifies to questions of political access and equity,” she said. “Eileen has her heart set on being an activist-scholar. She is fully aware that a life of the mind, particularly in the study of literary arts, is not the most profitable course to pursue as a career, but nevertheless sees purpose in doing so.

“I have no doubt that she will thrive at Oxford.”

Sidney Milkis, a professor of politics and director of the Honors Program of the Department of Politics, said that Ying is an exceptional student and scholar. “She is just the kind of intellectually ambitious individual we hope to attract to the Honors Politics Program,” he said. “She draws connections between politics and literature that all too often go unseen; and she explores how racial, ethnic and sexual inequalities are deeply implicated in public spaces, shedding new light on the important but under examined role of political geography in distributing wealth and power.

“Eileen has brought intellectual courage and passionate engagement to the Honors Politics tutorials; and her teachers take pride in seeing how the unique challenges of the Honors program helped prepare Eileen for the trial of the Rhodes interviews – and the exciting course of study she will pursue at Oxford University.

“Eileen’s award also testifies to the quality of the University of Virginia's Department of Politics Honors Program, which has graduated five Rhodes Scholars in the past seven years.”

“I’m not exaggerating when I say that I consider Eileen more like a peer than a student,” Chong said. “She is incredibly well-read and sophisticated in her thinking and I find our conversations about her readings to be a joy. She has been very carefully considering the historical factors that have racialized Asian Americans in this country through labor and immigration and thinking through whether these categorizations hold, are intensified, or have dissipated in the present and the future of late capitalism, which is when many of the works of literature she’s analyzing are situated.”

Chong said Ying has also been doing some complex comparative work in the field of Afro-futurism, as well as a long-standing discussion of biopolitics on considering how populations might be defined and managed not only based on their DNA or racial phenotype, but also new categories such as their susceptibility to disease, resilience to climate change, adaptability to digital or intellectual labor.

“All of these are reflected in the futuristic or near-future dystopias represented in a large swath of contemporary literature that Eileen is examining,” Chong said. “I’m glad that the Rhodes has acknowledged her research potential, as she has the ability to move the field of Asian American literary studies forward into new ground.”

Andrus G. Ashoo, director of the Office of Citizen Scholar Development, was enthusiastic about Ying’s selection and noted the breadth of talented students at the University.

“For every recipient of the Rhodes Scholarship we have, there are many other deserving candidates from the University of Virginia and probably a few students who didn’t even think of applying,” Ashoo said. “So I’m elated when I get a phone call with news like this. Eileen is an impressive scholar with a track record of running toward challenging questions and opportunities to learn, and she always seems to do so in community with others. I am proud to know her, and I am excited for the opportunity she has these next few years at Oxford.”

A Year We Will Never Forget: 2019-20 in Review END_OF_DOCUMENT_TOKEN_TO_BE_REPLACED

‘What Will You Carry With You?’ Remarks From UVA President Jim Ryan END_OF_DOCUMENT_TOKEN_TO_BE_REPLACED