Exhibit Will Explore U.Va. Presidents as Students and Scholars 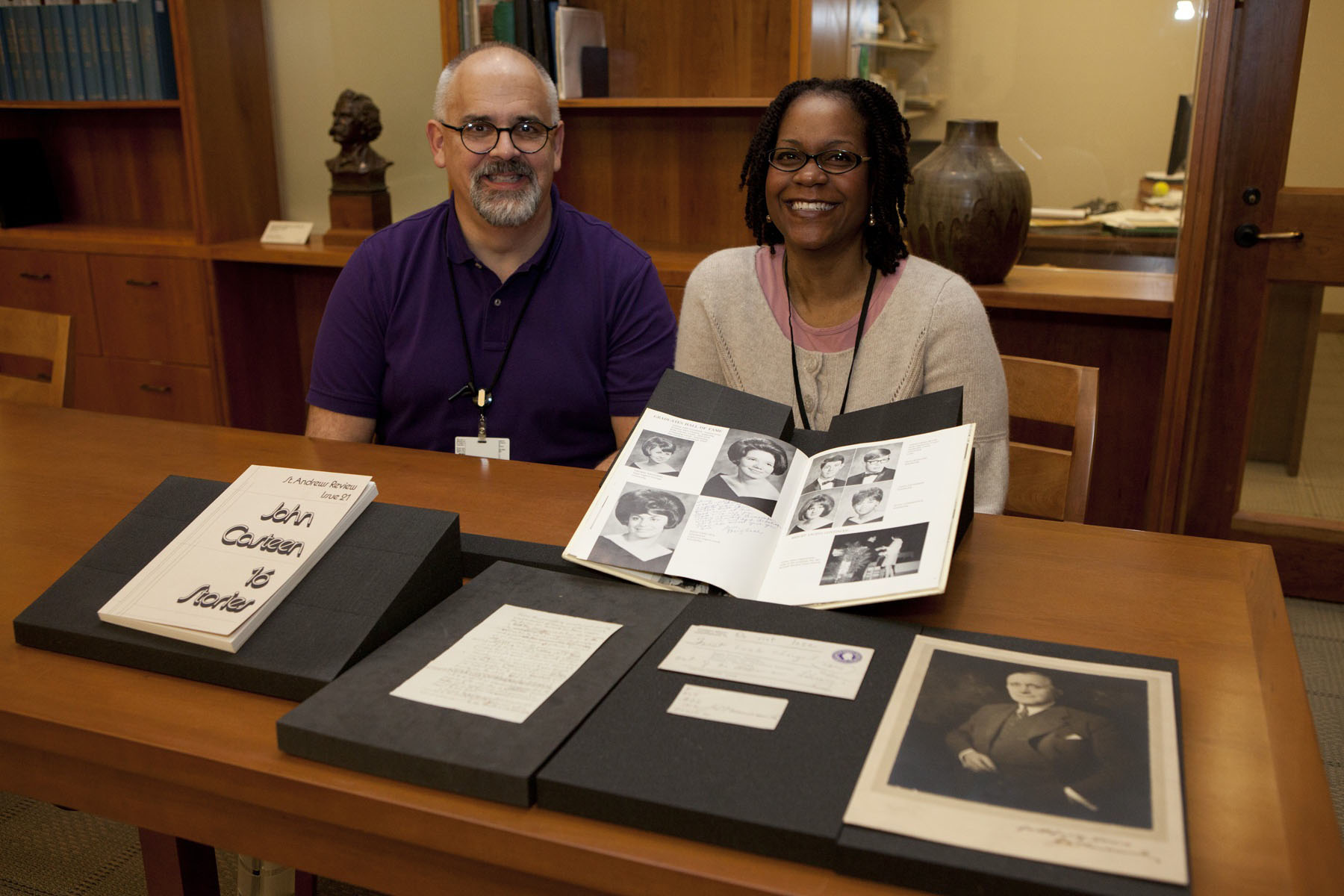 February 4, 2011 — Researching all eight of the University of Virginia's presidents, Edward Gaynor and Petrina Jackson were struck by how many of the issues they wrestled with haven't much changed since Edwin Alderman became the first president in 1904.

Gaynor, head of collection development for the Albert and Shirley Small Special Collections Library, and Jackson, the library's head of instruction and outreach, dug into the University's archives and collected items for an exhibit, "Students, Scholars, Leaders: The Academic Lives of the University of Virginia's Presidents."

The exhibit opens Tuesday in the lower gallery of the Harrison Institute/Small Special Collections Library and runs through June 5.

Alderman's 1882 college graduation speech from the University of North Carolina at Chapel Hill, which will be on display, was on the influence of corporate power, still an issue in the 21st century. John L. Newcomb (president from 1931 to 1947) had to manage the University through the Great Depression and World War II; war and recovery from the Great Recession are again contexts talking about today."

And like President Emeritus John T. Casteen III, Newcomb presided over a huge expansion of the University's Grounds, funded by the federal government through the Depression-era Works Progress Administration.

The exhibit is in honor of Teresa A. Sullivan, who will be formally installed as U.Va.'s eighth president on April 15, during Founder's Week. The focus is on the presidents as students, scholars and researchers, from their high school years through post-graduate research.

"They weren't born presidents," Gaynor said. "They grew and developed."

Thomas Jefferson didn't name a president at U.Va.'s founding. The University's chief executive was the rector, who chairs the governing Board of Visitors, with the chairman of the faculty managing day-to-day operations. "Each faculty member took it on for a year so all faculty would be well-informed about the University's operations," Gaynor said.

It wasn't until the Rotunda burned in 1895 that the idea of having a president gained sufficient momentum. "It became apparent that neither the rector nor the chairman could manage as extensive a rebuilding of the University and do everything else expected of them," Gaynor said.

The job was defined and an offer made to future U.S. president Woodrow Wilson, who was then president of Princeton University. He declined, and three years later, Alderman, president of Tulane University, took the job.

His college graduation speech, which was awarded UNC's Mangum Medal for oratory, will be accompanied in the exhibit by a photo of him as a high school student in 1874 in Wilmington, N.C.

Jackson and Gaynor noted that Edgar F. Shannon Jr., who presided from 1959 to 1974, represented a turning point for U.Va. presidents in terms of scholarship.

"He was a true academic: Rhodes Scholar, a Tennyson scholar and a Guggenheim Fellow," Jackson said. His most important work, on the poet Alfred Lord Tennyson, is in the exhibit, as is the text of the speech he gave on the steps of the Rotunda in 1970 amid student anti-Vietnam War riots.

"It defines who he is," Gaynor said. "It's a very powerful speech. He put a lot of himself into it."

As a U.Va. student, Frank Hereford (1974-1985) was a sportswriter for College Topics, the predecessor to the Cavalier Daily, and a physics major. "We have a top secret report he helped write while a graduate student in the Physics Department for Jesse Beams, who worked on the Manhattan Project," Jackson said.

Casteen will appear in the exhibit as a member of the debate team in Corks & Curls, the University's yearbook, and through a book of his short stories. "Even while he was dean of admission, he still produced scholarly writing and short stories," Gaynor said. "We have drafts of his stories and his dissertation."

Sullivan provided her doctoral dissertation, "Marginal Workers, Marginal Jobs: Underutilization in the United States Labor Force," and The Shield, her yearbook from St. Joseph's High School in Jackson, Miss., of which she is a 1976 graduate. She appears in numerous photos as valedictorian, a debater and member of the National Honor Society, and of course there are the inscriptions. "Stay the sweet girl you are," wrote her friend, Mary Anne Rice, class salutatorian.

In addition to honoring U.Va.'s presidents, Gaynor said the purpose of the exhibit is to show the place of Special Collections at the University. "We want people to remember that we are the University archives," he said. "We are a critical part of the University's research mission; the material here is to be used. I hope it would inspire people to come in and dig a little deeper."

Class of 2020: Memories and Moments From a Long-Anticipated Celebration END_OF_DOCUMENT_TOKEN_TO_BE_REPLACED