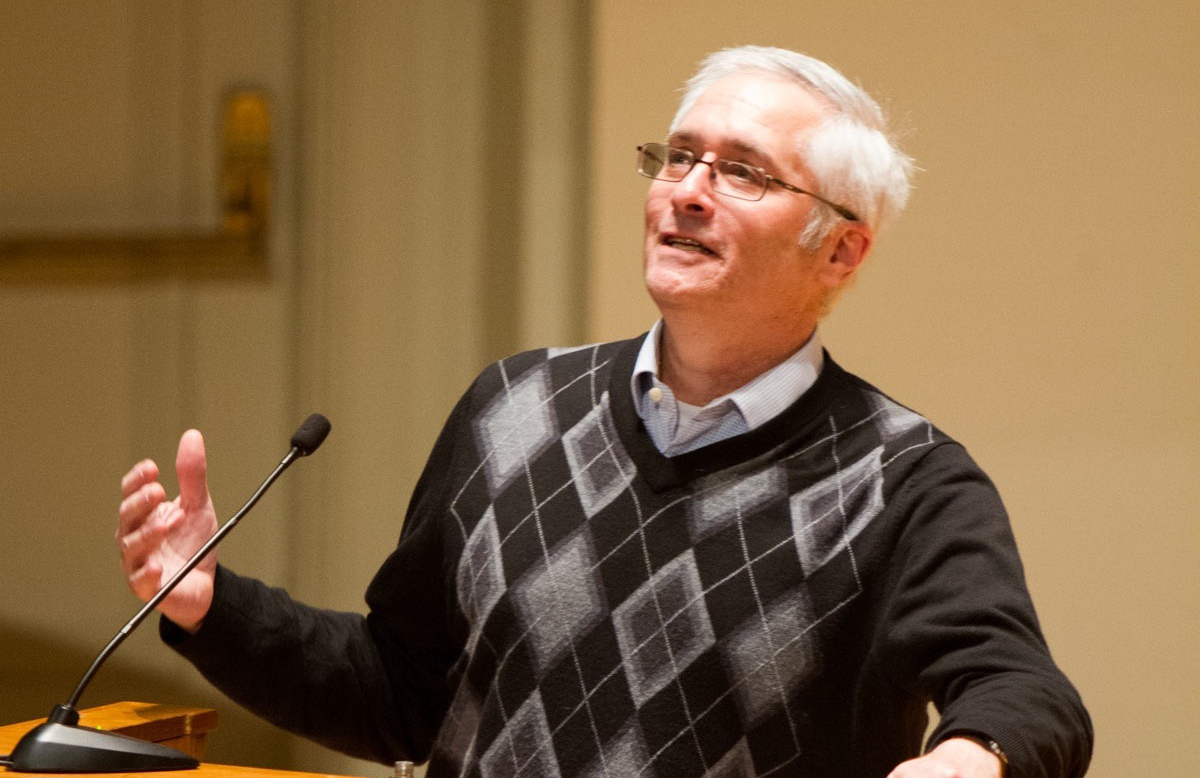 The meaning of life, social inequality and Judeo-Christian theory were among the six weighty topics covered by University of Virginia faculty members in Old Cabell Hall Auditorium on Thursday – each in less than 12 minutes.

The talks were a part of the Student Council’s third annual “Look ‘Hoos Talking” event,  a program modeled after TED conferences, where experts outline ideas and research in an entertaining and accessible manner.

“Look ‘Hoos Talking” is a chance for students to interact with the academic world in a different way and exposes them to ideas that stretch across disciplines, said Schuyler Miller, co-chair of the Student Council’s Academic Affairs Committee.

“This event is important because it gives professors the opportunity to share great ideas outside of their classrooms and students the chance to absorb ideas from an array of academics,” Miller said.

Students nominated and selected the speakers for this year’s “Look ‘Hoos Talking,” and about 450 students and faculty came to hear them speak.

This year’s program included physics professor Lou Bloomfield, philosophy professor Mitchell Green – both of whom are teaching MOOCs this semester – media studies professor Bruce Williams, religious studies professor Paul Jones (all of the College of Arts & Sciences), assistant professor of computer science Mark Sherriff in the School of Engineering and Applied Science, and Theresa Carroll, senior assistant dean for academic and student services in the School of Nursing. The student a cappella group “The Hullabahoos” also performed during intermission.

“The professors are from different fields of study to emphasize the research and innovation occurring across U.Va,” Student Council president Johnny Vroom said before the event. “This program is indicative of the academic culture we have at U.Va. and lies at the intersection between entertainment and academia.”

Green opened the program with the big question: What is the meaning of life? He talked about different philosophical approaches to the question and concluded by interpreting “meaning” as “value.”

“You’ve got to be the one to say what’s valuable in your life – hopefully after reflection and experience,” Green said.

Jones also explored fundamental philosophical questions through his talk “Patience: A Theological Experiment.” Approaching the subject through a Judeo-Christian perspective, Jones asked what would entail a better kind of theology. He proposed viewing God as an alternately patient and impatient entity that allows “human beings the time and space needed to live into the diverse identities they are called to have.”

Williams turned the conversation to social inequality in his talk on HBO’s television series “The Wire,” the subject of a class he’s taught for each of the past three years.

“‘The Wire’ is better than most social science because it is also art,” Williams said, explaining that the show provides a humanistic view of social and economic inequality that science oftentimes cannot convey.

The problems with the system are serious, however, Sherriff said. “We are getting to a point where Internet service needs to be as clear and available as water, telephone and electric utilities.”

Carroll’s talk was also humorous. Titled “The Sleep Patterns of Post-Menopausal Women,” her lecture focused on what keeps her up at night, such as her worries about student growth and development and support for women scholars.

Bloomfield concluded the program with “Interesting Times Come from Coloring Outside the Lines.” He talked about life decisions through the metaphor of paths and choosing between the well-worn path or setting out on a new path. “Life is a journey, so the route is important,” he said.

Audience member and third-year student Colleen Gallagher said she appreciated the diverse perspectives represented at the event and even felt inspired to potentially step outside her French and English majors. “I might even go so far as to take computer science next year after having seen Mark Sherriff give such a hilarious presentation on the otherwise scary subject of piracy,” she said.

“I felt each talk brought something new to the table and challenged listeners to think,” Miller said. “In total, the speeches exhibited the diversity of interests and passions that we find at the University. I appreciated that the talks weren’t merely academic ideas from each professor’s area of study, but rather the talks explored the meaning of life, relationships, risks, patience and social values.”

Student Council will post a video of the event here.

Fall Is in the Air on Grounds END_OF_DOCUMENT_TOKEN_TO_BE_REPLACED