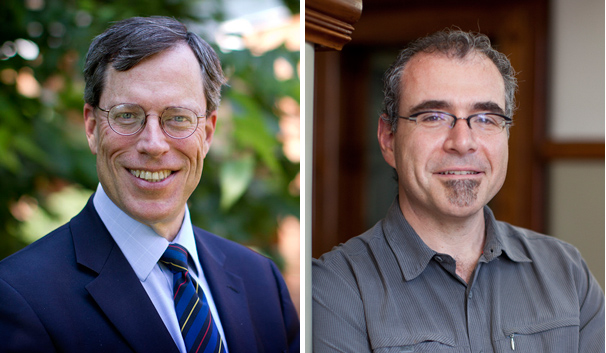 University of Virginia history professor Philip Zelikow stands by the statue of the “Bird Man,” as many on Grounds call it, and tells who the statue represents and how the sculptor interpreted the man’s story. Zelikow describes the statue as a symbol of how the world entered the modern age after World War I.

His lesson is part of the video that introduces his massive open online course, or MOOC. “The Modern World: Global History Since 1760” debuts today on Coursera, an online education company started last year by two Stanford University professors.

Zelikow, the White Burkett Miller Professor of History, is one of five U.Va. professors teaching the first group of MOOCs this semester, who have been working hard to make interesting videos and adapt educational materials to virtual classrooms full of unprecedented numbers of students.

U.Va. is among 33 universities whose faculty are offering courses through Coursera. More than 2 million people around the world have signed up for the classes.

The five non-credit courses from U.Va. – three from the College of Arts & Sciences and two from the Darden School of Business – are seeing big enrollments of 30,000, 40,000 or more. Prospective students can view a short video in which the faculty members summarize their courses on the Coursera website. Two of the courses start this month, including one that has a second part that begins in April, and three others will start in March.

Kristin Palmer, Information Technology Services’ program director of online learning environments, detailed the steps necessary for putting the courses in their virtual, as well as physical, environments: “Coordinating the preparation of the materials to ensure successful online delivery; restructuring the on-Grounds course to get the maximum benefit from professor face-to-face interaction and dialogue to improve the learning experience; copyright clearances for a global audience; filming lectures in advance and working through post-production; developing various assessments (in-video, weekly quizzes, assignments); developing on-Grounds assignments that provide a richer experience with the course staff and subject matter; Coursera site preparation and branding; and then staffing both courses to provide a supported learning environment.”

Nearly 38,000 students had signed up for Zelikow’s modern history course a few days before Monday’s debut. At the same time, almost 90 U.Va. students were enrolled for the same class on Grounds. Both the Coursera and the U.Va. students will use the same online material as a common foundation for their different learning experiences, Zelikow said.

Philosopher Mitchell Green, Horace W Goldsmith Distinguished Teaching Professor in Humanities, has almost 48,000 registered for his course, “Know Thyself,” which begins March 4. He said he hopes some of the 120 U.Va. students taking the philosophy class on Grounds will volunteer to help moderate discussions in the online course.

“In terms of coverage of material, they will be about one month ahead of their online peers, and so should be in a good position to help them learn,” he said. “And of course, one of the best ways to master an idea is to teach it to someone else. As a result, I am hoping that my on-Grounds students’ participation in the MOOC will enhance their educational experience.

“It might also enable them to engage fruitfully with learners of a wide variety of ages, cultures and geographical origins.”

One of the challenges is how to replace or make up for the absence of face-to-face, nonverbal communication with students, Green said.

“We are working hard to make the video lectures high quality,” he said. “Doing so requires my re-thinking some of the ways I teach, since in lectures on Grounds I work hard to respond to students’ questions. Unfortunately, the video camera doesn’t raise questions, or even furrow its brow when I am being unclear, so as I film lectures I’ve been trying hard to anticipate questions and possible misunderstandings.”

Physics professor Louis Bloomfield, who’s putting his popular “How Things Work” class on Coursera, also stressed taking the time to make the most of the course videos. The class is a practical introduction to physics and science in everyday life, using an approach for non-science students.

At this point, his class will consist of six “episodes,” as he’s calling them, beginning in March. Eventually he’d like to complete a two-semester sequence of 40 episodes.

“As for the online videos themselves, I’m not trying to prepare simple video versions of my class lectures,” Bloomfield said. “I’m not a perfect lecturer and the skill I bring to the classroom is not perfectly prepared words. Rather, it’s my ability to interact with the students and bring each topic to life in a responsive way, guided by student questions or observations.

“Since I can’t recreate that interaction in a video, I need to bring something else of value to the video. What I’m doing is to produce those videos the way I have produced science television, with all of the creativity and nearly as much pre-production, production and post-production.”

To keep their students engaged, Zelikow and Darden professor Edward Hess, who is teaching “Grow to Greatness: Smart Growth for Private Businesses” in two parts, will intersperse short videos with writing exercises or quizzes.

“This course is based on the principle that one learns by doing,” Hess says in his introductory video. His students – numbering more than 60,000 for part one of the class –may also choose to join a “course community,” where they can learn from each other.

Even before its Jan. 28 start date, Hess’ course has had 8,000 users log in and look at the site, and 689 posts in discussion forums from 450 individuals.

Creating some kind of community is another challenge in how best to promote smaller-group discussions as part of the course, Darden professor Michael Lenox said. He will teach “Foundations of Business Strategy” to more than 40,000 online students. He said he’s still deciding on some processes: He might have small groups produce video notes on topics and also have students vote which questions they’re posing are the most important to answer.

The preparation requires a lot of effort, several of the teachers said, but surprises as well as challenges.

Green has already heard from some of his online students.

“I’ve been inspired and delighted by many of the students and educators from across the country and globe who have signed up for my course and who have reached out to me to express their enthusiasm,” he said.

“One high school teacher from Boise plans to build a fuller, graded course for her AP English students atop the platform provided by my ‘Know Thyself’ course. A group of professors at a small college in Michigan plans to do much the same at the college level. I’ve received charming notes from Scotland, India and China. One person, writing from Peru, has gone so far as to offer to translate all my lectures into Spanish.

“As you might imagine, I’ve taken her up on the offer!”