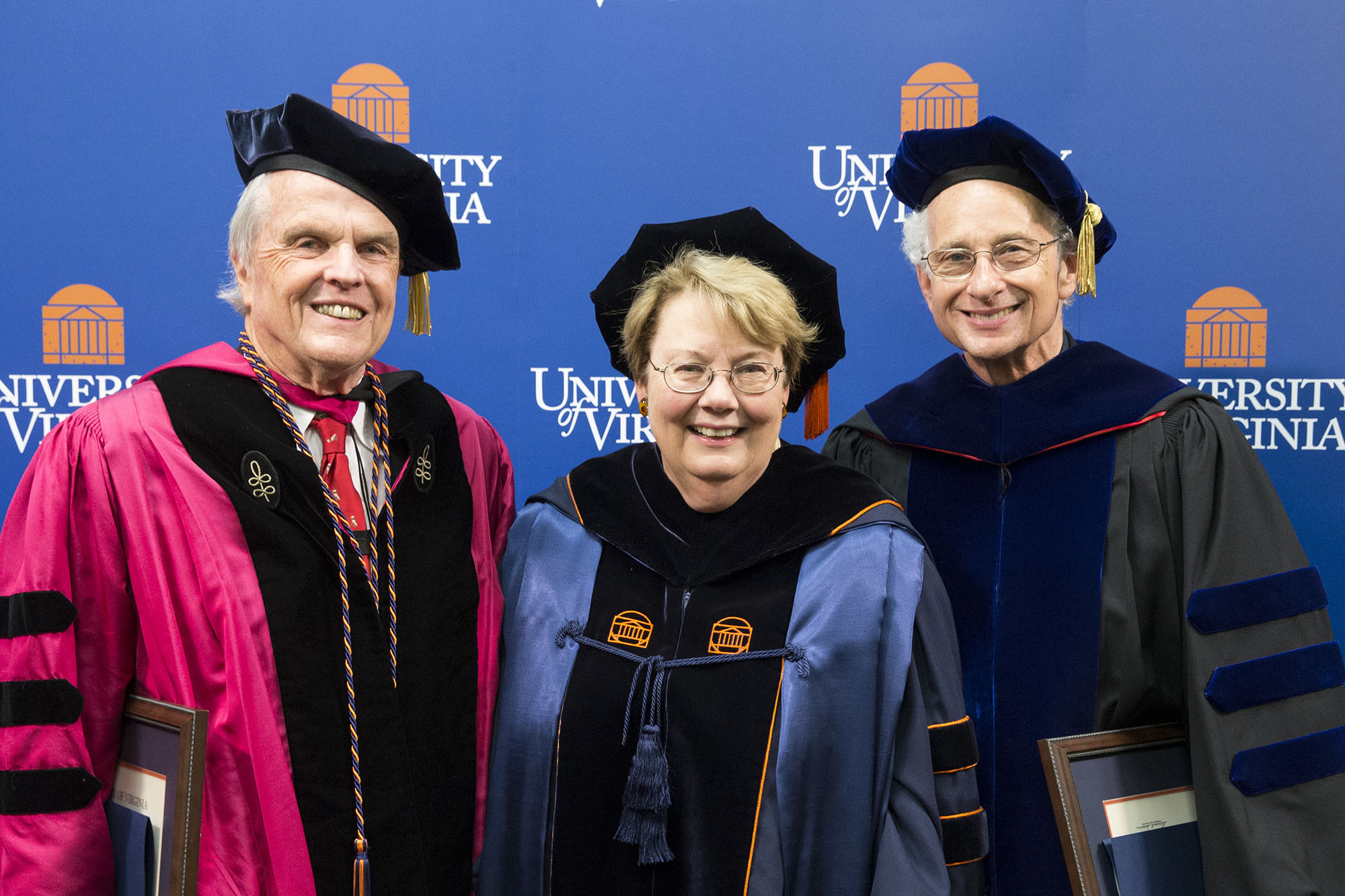 While an ensemble of the Cavalier Marching Band played lively music, University of Virginia faculty, administrators and about 400 students in academic regalia followed Grand Marshal Gweneth L. West in processing to the stage at Friday’s Fall Convocation ceremony, held at the John Paul Jones Arena.

Fall Convocation, which kicks off Family Weekend events, honors third-year undergraduates for their academic success, reveals the Thomas Jefferson Award winners and recognizes faculty who have received teaching awards earlier in the year.

Intermediate Honors were awarded to third-year students who are in the top 20 percent of their school’s classes while carrying a full courseload during their first four semesters at the University.

The deans of the College of Arts & Sciences and the schools of Architecture, Education, Engineering and Applied Science and Nursing presented the 418 candidates in their disciplines, and U.Va. President Teresa A. Sullivan conferred the Intermediate Honors upon them.

“These students have committed themselves to the pursuit of scholarship in the manner envisioned by Thomas Jefferson when he opened the University in 1825,” Sullivan said.

In introducing Gallagher, Sullivan told an anecdote showing the esteem his students have for him. He announced to one of his classes that he would be leading a tour at the Fredericksburg battlefield that Saturday, beginning at 9 a.m., and invited them to join him, stressing that it was not a required assignment.

The audience that morning at the battlefield was much bigger than usual – not only did many of the students show up, but they also told their parents, many of whom attended.

In his remarks, Gallagher gave four suggestions that he said would be helpful to anyone, no matter what age, with his advice often filtered through his historical perspective.

“I urge you never to settle for less than what you, from an honest assessment of your capabilities and of the nature of a project or assignment, know to be a full effort,” he advised the students. “I believe you have the internal sense to hold yourselves to a personal standard higher than those set by others – including, at times, by those who measure and grade your efforts.”

His second suggestion elaborated on the excess of hyperbole in our culture. He urged the audience to “be alert to exaggeration in what passes for news coverage.”

“The ‘news’ – and I put that in quotes – frequently emerges ... almost never framed with an appreciation for historical context that would reveal that almost nothing is really new and that our nation, at various points, has dealt with far greater crises than any currently unfolding,” he said.

He commented on three topics that “suffer especially from a lack of attention to proper historical framing”: discussion of immigration issues, coverage of the possible spread of the Ebola virus and the alarming message that the U.S. is witnessing the worst-ever political discord.

Although Ebola presents “a challenge, both medical and administrative,” he said in the influenza pandemic of 1918-19, almost 30 percent of Americans were infected out of a population of 106 million at the time. Between 500,000 and 675,000 people in the U.S. died from that flu.

In terms of political division, he said, “As for our never having been so divided, historians of the Civil War can counter with at least one obvious example that puts the lie to that idea.

“Avoiding hyperbole – hysterical excess might be a better phrase – in our political discussions would render us far better able to deal with the kinds of crises that have come up before, and which, as a nation, we always have managed to overcome.”

In his third suggestion, he encouraged the students to choose a career to which they could passionately dedicate themselves.

“You will spend untold thousands of hours at work, and few things can give you as much chance for long-term satisfaction as choosing a profession that gives you a sense of enjoyment, of challenge and of accomplishment,” he said.

He used himself as an example, saying when he graduated with a Ph.D. in history from the University of Texas at Austin in 1982, the academic job market was much worse then than now. He worked at a well-paying job, which he did not name, for 10 years before he looked for a teaching job and found one at Pennsylvania State University. Although he had to take a substantial pay cut, he said it was the best thing he could have done.

“I would not trade places with anyone in the United States,” he said, adding that he still “savors his working situation.” He wished the same to all the students there.

“I like to think of you getting things right in your own work and experiencing the singular delight and satisfaction of succeeding at something that matters to you.”

For his last suggestion, he said he was directing it especially to “the young men in the audience who might be resistant to this advice.” That advice: to read the novels of Jane Austen, starting with “Pride and Prejudice.”

The bestowing of the Thomas Jefferson Awards offered another opportunity to illustrate “instructive characters.”

Leffler, Edward Stettinius Professor of History, joined the Corcoran Department of History in 1986. He specializes in U.S. foreign relations during the Cold War period, and has received several top prizes for his work. He also served as dean of the College and Graduate School of Arts & Sciences from 1997 to 2001.

“It’s a great honor to receive this award,” Leffler said after the ceremony, citing other “very distinguished” recipients he has known who were deans, Hugh Kelly and Raymond Nelson, who had a tremendous influence on him, he said.

“Alec” Horniman, Kilgallon Ohio Art Professor of Business Administration in the Darden School, was recognized for his concentration on leadership and applied ethics, as well as his collaboration with members of the University across all its schools and departments.

“It is a distinctive honor to be recognized by the university I’ve chosen to devote myself for 47 years,” he said, also after the ceremony. Horniman said his career was not a planned journey, as he started out working for an aerospace firm. He didn’t intend to become a professor, but a friend challenged him to get his doctorate, and he came to the Darden School soon after that.

He thought he might teach for three years, he said, but he enjoyed it so much, he has stayed at U.Va.

At the conclusion of Fall Convocation, Sullivan invited the parents, students and their families to enjoy the variety of events planned for Family Weekend.

A Year We Will Never Forget: 2019-20 in Review END_OF_DOCUMENT_TOKEN_TO_BE_REPLACED

‘What Will You Carry With You?’ Remarks From UVA President Jim Ryan END_OF_DOCUMENT_TOKEN_TO_BE_REPLACED