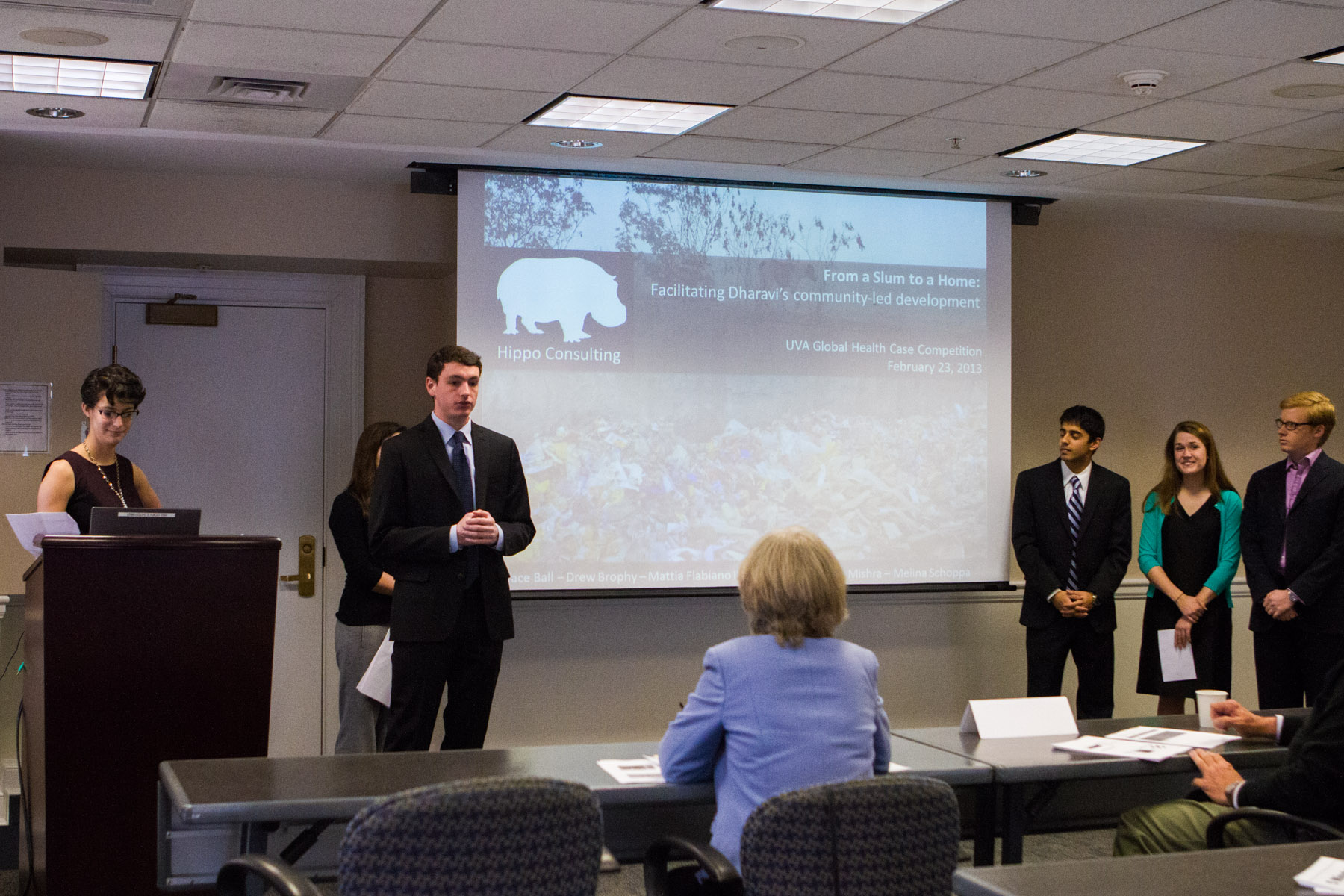 Drug-resistant strains of tuberculosis are being reported in the Mumbai slum of Dharavi, one of the largest slums in the world and home to an estimated 1 million people. That’s the hypothetical case that 10 teams comprising 93 students from nine of the University of Virginia’s 11 schools were asked to address at the inaugural U.Va. Global Health Case Competition on Saturday and Sunday.

Hosted by the Center for Global Health, the competition drew students from diverse fields of study to address the complexity of the case and generate encompassing and multi-dimensional recommendations.

“The case competition is a call to action as well as a celebration and showcase of all the different perspectives that exist on Grounds,” Center for Global Health director Rebecca Dillingham said. “These perspectives are all critical for coming up with reasonable and scalable solutions.”

“Traditionally the different schools at U.Va have been very siloed,” said Colleen Laurence, a 2007 College of Arts & Sciences graduate currently enrolled in U.Va.’s post-baccalaureate, pre-medical program. “We thought this event was a great opportunity to bring the schools together for an amazing cause.”

Laurence, along with fourth-year medical student Pranay Sinha, suggested hosting a case competition to U.Va.’s Center for Global Health last fall. A year ago, Laurence helped organize the International Global Health Case Competition at Emory University, where she was earning her master’s degree in public health. It was the fifth year Emory hosted a case competition and the first year for international participation. Sinha competed on the team from U.Va that participated last year, and like Laurence, he hopes to expand the program at U.Va. “The competition has the potential for having such a transformative effect on the community,” Laurence said. “As a U.Va. graduate, I wanted to see that happen here too.”

“This is a hypothetical exercise, but it has real implications,” Laurence said, explaining that while the case narrative is fictional, all of the evidence and statistics are real. “These are real problems, and so the students are proposing real solutions. If you’re going to create a solution that is tenable, you need to incorporate all different perspectives and consider different fields – not just medical fields but also anthropology, religious studies and so on.”

Students applied as a team or individuals in January and received the case Feb. 18, four days before they were to present. The day before the competition, the teams met with a faculty mentor for an hour to go over their strategy and research.

“The fact that they came up with these solutions in only four days is incredible,” Sinha said. “It gives us hope for the future that these are the next leaders of global health.”

Shortly after the final round of competition closed, Legro announced the winning team to be the only one whose members were all first-year students. They topped teams of fourth-years and graduate students with their proposed mobile health clinic and data-collection network to win the $1,200 prize.

“It is surprising because we are probably the team with the least experience with this type of critical thinking,” team captain Marisa Reddy said. “Our team is so cohesive and has intelligent, creative individuals. What it came down to was what is the most innovative and cost-efficient solution that can be implemented. We all became very passionate about our idea.”

The other members of the winning team include Benjamin Harris and Usnish Majumbar of the College, and Christopher Cai, John Hack and Sreemoyee Som of the Engineering School. They advance to compete at this year’s International Global Health Case Competition at Emory on March 23.

Laurence said that U.Va.’s competition is a part of a new Center for Global Health initiative. Boosted by a student advisory board and events such as the case competition, the center is seeking to continue to develop into an interdisciplinary institution, she said.

“That’s the dream, though it’s probably years away,” she said.

Fall Is in the Air on Grounds END_OF_DOCUMENT_TOKEN_TO_BE_REPLACED