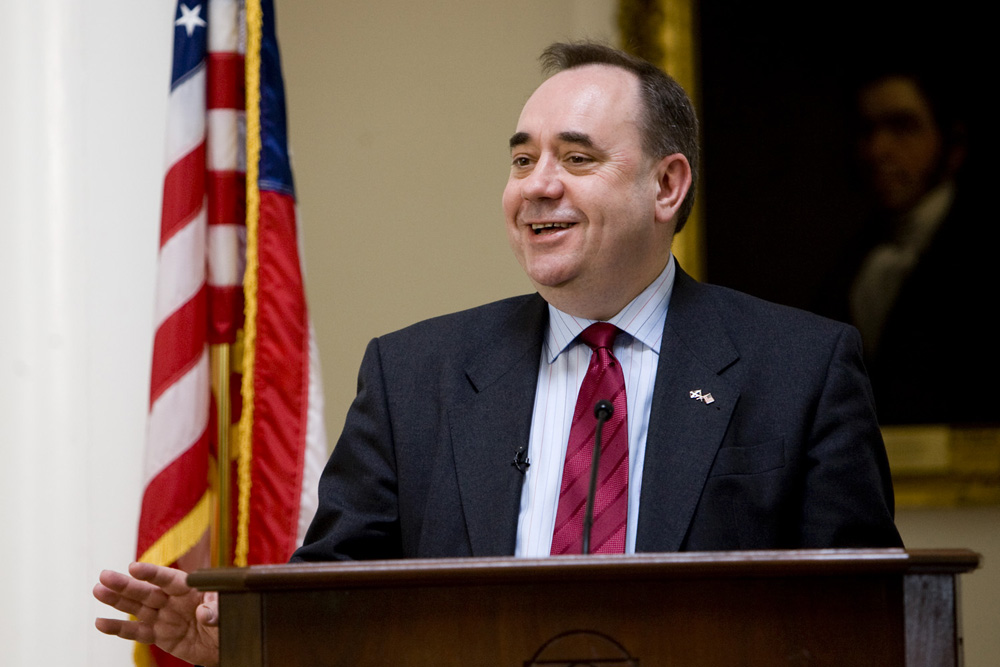 April 1, 2008 — Addressing a standing-room-only audience in the Dome Rome of the University of Virginia's Rotunda Tuesday, Alex Salmond, the first minister of Scotland, linked his nation's independence to the principles of Thomas Jefferson, the father of U.Va.

Salmond is on a tour of the United States to mark Scotland Week — a series of events that celebrates the cultural, economic and academic achievements of the Scots. Salmond is the head of the Scottish government, which directs domestic issues within Scotland but leaves security issues and foreign affairs to the British government. As leader of the Scottish National Party, Salmond made it clear that he wants to take the next step of full independence for Scotland.

"Scotland is a nation and it should be self-governing," he said. "People do it better when they do it themselves."

Salmond linked Scottish independence to Thomas Jefferson and the Declaration of Independence, which Salmond said was influenced by the 14th century Declaration of Arbroath. That declaration, to which Scottish noblemen put their seals in 1320, declared Scotland to be an independent sovereign state.  The declaration was historic, Salmond said, because it stated that all men were equal in the eyes of God; that there was a two-way relationship between the government and the governed; and that the king would be replaced if he did not defend the country.

“Arbroath was not only a ringing declaration of the fundamental rights and integrity of an independent Scotland, but arguably Europe's first statement of a contractual relationship between government and governed," Salmond said.

These values resonated with Jefferson, who included them in the Declaration of Independence. "These are principles that apply to all nations and all people," Salmond said.

"Jefferson was relentless in the pursuit of democratic principles," Salmond said, "and he was unabashed in his ambition for the United States of America and all of its people. We in Scotland – our politicians and our people – can draw inspiration from the conduct of Jefferson."

Salmond also cited Scotland as the first nation to provide universal public education in 1696. That, he said, is a value that Jefferson would have applauded. Salmond said that having a well-educated population has benefited the country through to modern times.

The time is right for Scottish independence, Salmond asserted, because there is international access to markets and there is now shared sovereignty through organizations such as the European Union and the United Nations. He said that Scotland would also not be a pauper state, since it had an industrial base, a vast financial services industry and energy resources. In addition, the transition to an independent government would be relatively simple, since there is already a government infrastructure in place.

"The vast majority of people want a referendum," Salmond said, so that Scotland can follow a clear direction dictated by the people.

Salmond, who said he was impressed with the University's Declaration of Independence exhibit, presented Dr. Arthur Garson, executive vice president and provost, with a limited edition printing of the Declaration of Arbroath.

The first minister joked with his audience about how many people who had no Scottish heritage were trying to claim it and he thought that was a supreme compliment. And while he is spending Scotland Week in the U.S. this year, he invited the audience to visit Scotland next year to celebrate the 250th birthday of the national poet Robert Burns.

Here Is What You Need to Know About the New Coronavirus Variant, Omicron END_OF_DOCUMENT_TOKEN_TO_BE_REPLACED

Fall Is in the Air on Grounds END_OF_DOCUMENT_TOKEN_TO_BE_REPLACED

Meet the Cats and Dogs Your CVC Donation Supports END_OF_DOCUMENT_TOKEN_TO_BE_REPLACED