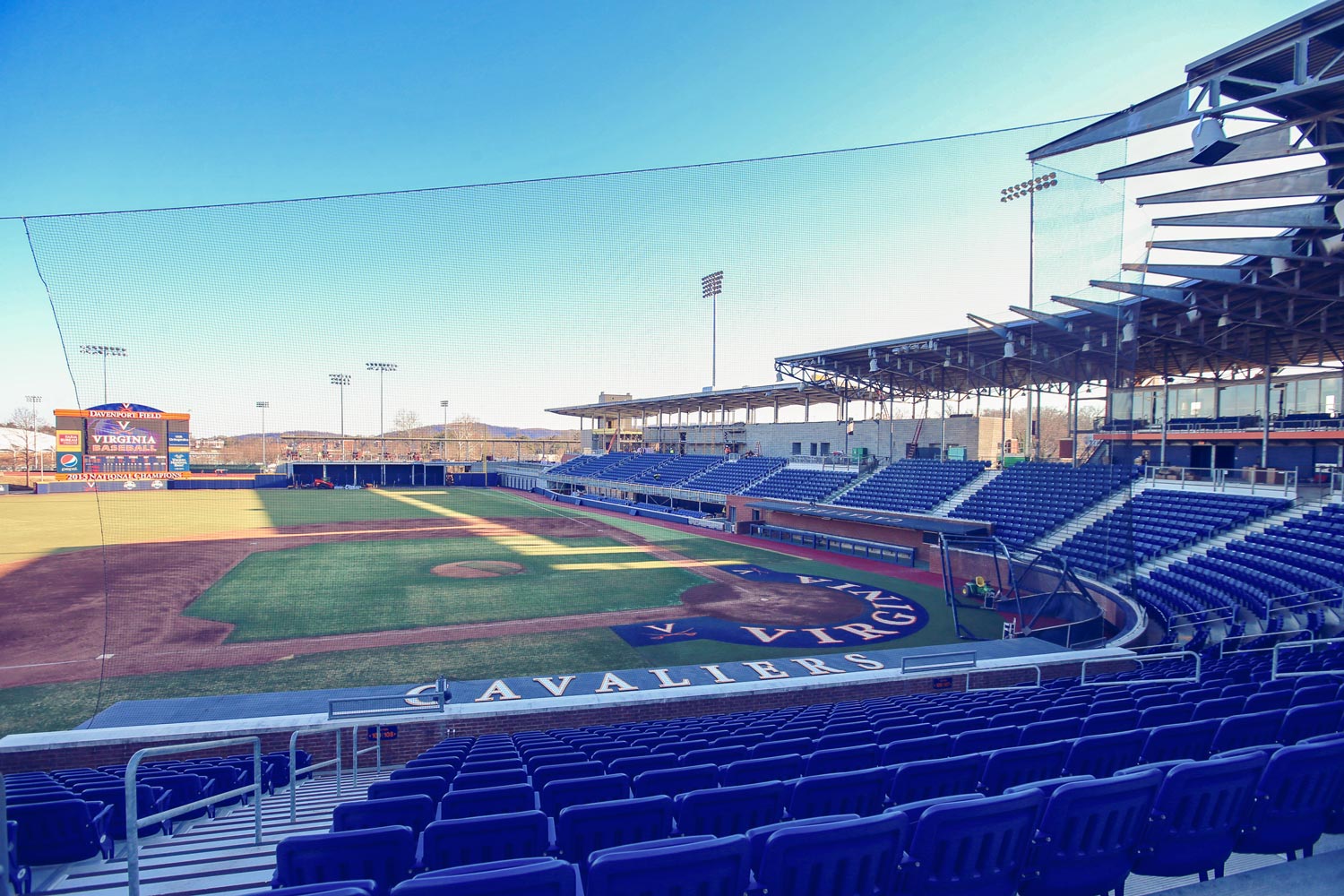 Fans at the Cavaliers’ Feb. 20 home opener will see a transformed stadium – particularly in areas along the right-field line. (Photo courtesy UVA Athletics)

During his illustrious run as the University of Virginia’s head baseball coach, Brian O’Connor has signed his name to countless pieces of memorabilia. He broke new ground recently.

“I signed an autograph on the hard hat of one of the guys who’s been working out here every day,” O’Connor said. “I was truly humbled and honored do that, because these guys are putting the work gloves on every day to make this happen.”

For some eight months, Davenport Field, the home of one of the NCAA’s premier baseball programs, has been a construction site. The Cavaliers, who have made 14 consecutive appearances in the NCAA tournament, opened practice Friday, and as their Feb. 20 home opener approaches, the 40,000-square-foot expansion project is nearing completion.

“Three weeks away from opening day, it looks like a ballpark,” said O’Connor, who’s in his 15th season at UVA. “The permanent seats are in, and the excitement is certainly in the air with our team, not only about starting practice, but because of the fantastic stadium.”

The project will cost $18.76 million. The Virginia Athletics Foundation has commitments for $16.3 million, including gifts, seat revenue and suite revenue, and fundraising continues.

“[Executive director] Dirk Katstra and the VAF staff have done a tremendous job of getting the commitments and gifts necessary for this undertaking,” said Carla Williams, Virginia’s athletics director. “I also have to commend the efforts of Coach O’Connor. The belief our supporters and former players have in him has played a big part in making this a reality.

“We are all excited for the season to begin and for our fans to have the opportunity to enjoy the changes at Davenport Field.”

O’Connor said: “I’m ecstatic that we’ve been able to have people donate the amount of money that they have to this project. We’re very, very close to the finish line. To do a baseball stadium project of this size, and be able to be as close as we are, speaks to the commitment of people to this program and this University.”

Construction started on the project in June. As the renovations began to take shape around them, the Wahoos practiced at Davenport Field in the fall and held their annual Orange & Blue World Series there.

“To do a project of this magnitude from the end of last season to the beginning of this season is almost unprecedented,” O’Connor said. “The University, the architect, the construction workers, they took it on, and here we are three weeks from opening day, and it’s scheduled to be ready.”

Reserved seats are sold out for this season, as are the 140 field club seats along the right-field line. In all, 2,605 season tickets (reserved and general admission) have been sold.

“I just can’t wait for people to sit in the seats and take in the different views at the ballpark,” O’Connor said. “I think it’ll be an incredible atmosphere.”

Fans will notice numerous upgrades and new features at Davenport Field, including:

Under O’Connor, Virginia has posted a 639-239-2 record, with four trips to the College World Series in Omaha, Nebraska. The Cavaliers were NCAA runners-up in 2014 and a year later won the program’s first NCAA title.

Virginia played its final home game last season on May 16, defeating Richmond 8-3. It would have been hard for O’Connor that night to envision the transformation that’s followed at Davenport Field.

“I see where we were at the end of last season and where we’re at today, and I’m just amazed,” O’Connor said. “The work that these people have done, the guys that wear the hard hats every day, has been incredible. They just haven’t stopped. It seems like there’s a lot of pride in this project.”