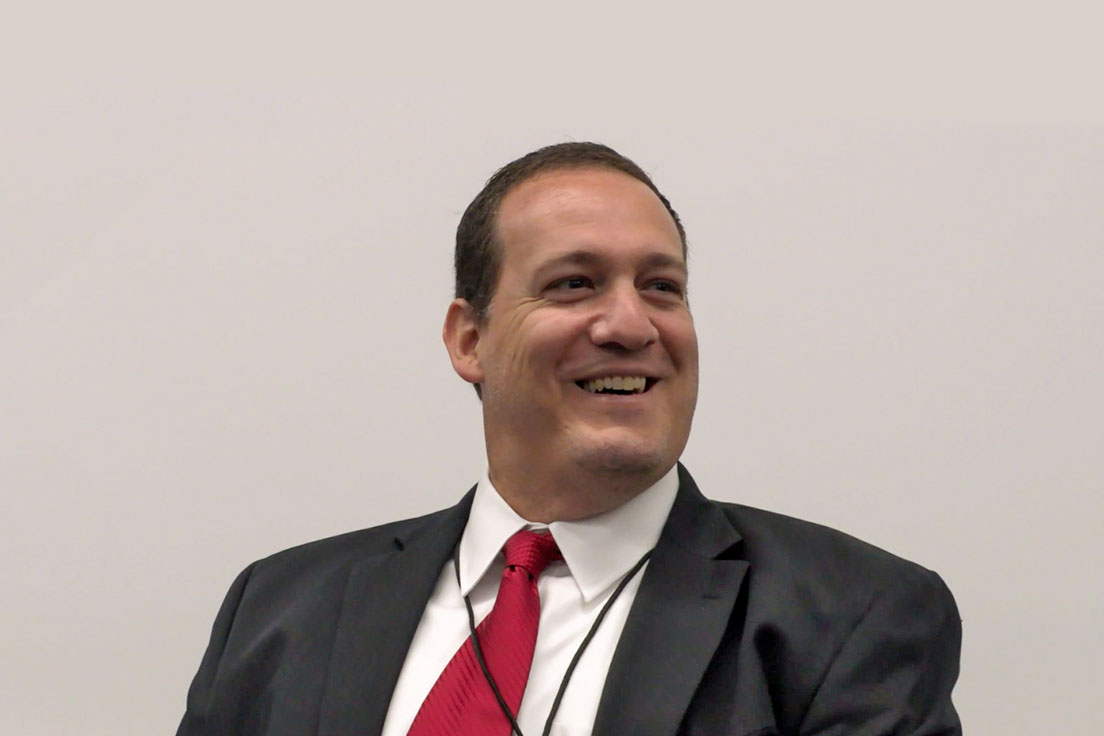 Nearly a quarter-century later, on the other side of the country, Burns was one of about 45 speakers at the inaugural Campbell Trophy Summit in late August. Their audience at Stanford University included 82 former nominees for the Campbell Trophy, which is sponsored by the National Football Foundation and College Hall of Fame.

“I’ve been to a lot of really wonderful events, professionally and athletically and so forth,” Burns said, “and this was one of the best things that I’ve ever done. It was just fantastic.”

At UVA, Burns followed an exceptionally challenging path. On the football field, he was a standout for head coach George Welsh on teams that posted a combined record of 30-16-1. In the classroom, Burns earned three degrees in nuclear engineering from the University: his bachelor’s and master’s in 1995 and his Ph.D. in 1998.

“I can’t mess this up, because there’ll be no Masters if I get it wrong,” Burns said with a smile during his remarks at Stanford. (Augusta hosts the annual Masters, one of professional golf’s four “major” tournaments, each year.)

The Campbell Trophy Summit, sponsored by Intuit Inc., was launched to honor the legacy of Bill Campbell, who died in 2016. Campbell played and coached football at Columbia University before enjoying great success in business in the Silicon Valley. His protégés included Steve Jobs of Apple, Larry Page, Sergey Brin and Eric Schmidt of Google, Jeff Bezos of Amazon, and Scott Cook and Brad Smith of Intuit.

“He was an amazing guy,” Burns said.

The organizers of the Campbell Trophy Summit, Burns said, thought “a great way to celebrate Bill’s life and legacy would be to bring in 100 or so young men that might have been Campbell finalists or winners over the last four- or five-year period, that are early-career young men, and use this as kind of a mentoring and networking opportunity for them, where they are the audience.”

The former football players spoke in part about what the game has meant to them, Burns said, and the “folks that had been personally involved with Bill talked about him and his approaches to life and business and so forth.

“It was like a whole series of pretty interesting TED Talks. My topic was how football is a platform for life and kind of pointed to my work as a nuclear engineer and things I’d done that you might not think have a real strong tie to football.”

Football, Burns told his audience, is “a unique microcosm for learning how to dynamically synthesize strategic planning, tactical execution and resilience in the face of adversity among a team with diverse talents toward the achievement of a common goal.”

The lessons he learned in the sport have proven valuable to him as an executive in the nuclear industry, Burns said, “and I went through a whole list of those.”

Burns and his wife, Robin, live with their four children in Aiken, South Carolina, about 20 miles from Augusta. None of the children is yet close to picking a college, but when that time comes, their “choices are UVA and Virginia,” Burns said, laughing.

A graduate of Bishop McNamara High School in Forestville, Maryland, Burns has four siblings. Three of them attended UVA as undergraduates, including his sister Laura Burns, who played lacrosse for the Wahoos.

His other sibling, James, played football at the Air Force Academy. But he eventually ended up at the University too. James Burns received his master’s from UVA in 2006 and and his Ph.D. in 2010, both in materials science and engineering. He’s now an assistant professor in engineering at UVA.

About six years ago Tom Burns and his wife purchased a house near where his brother lives in Crozet.

“We were figuring that we’ll move back and I’ll commute and go where I need to go, just because I want to be in Charlottesville,” Tom Burns said. “We’ve been threatening to move back ‘next year’ for, like, six straight years, so I think our credibility has been a little bit shot. But I think in the next two or three years we’ll be there.”

Burns, a member of the Raven Society at UVA, lived on the Lawn during his fourth year. His room number, 43, matched his jersey number. He received many accolades as an undergraduate, among them the Gray-Carrington Scholarship, which honors the memory of former students Arthur P. “Pete” Gray IV and Edward C. Carrington Jr.

The UVA Alumni Association annually presents the scholarship to a student who demonstrates exceptional personal integrity, achievement, leadership and humility.

Since earning his Ph.D. and leaving UVA, Burns has stayed busy. Before taking his current position at Parsons, he worked for the Defense Nuclear Facility Safety Board and as a consultant to the U.S. and international commercial nuclear power industries.

The challenge of having to balance athletics and academics at UVA, Burns said, taught him to prioritize and manage his time wisely.

“I was able to compartmentalize like a champ,” Burns said, “and it helps now, because with everything going on with work at a job like this, if you can’t compartmentalize when you go home, it’s miserable.”

At Virginia, he said, his attitude was as follows: “When I’m doing schoolwork, I’m focused on school, and football is not in my mind at all. And during football, I’m thinking about football. Not that I had many bad tests, but if you did, that’s not the time to worry about it, when you’re at practice. I can worry about that when practice is over.”

Playing for Welsh, who was inducted into the College Football Hall of Fame in 2004, was an experience Burns will never forget.

“George was great,” Burns said. “I think I was the only person in the history of Virginia football that got out of study hall. I was like, ‘George, trust me, I’m going to study. It takes me a half-hour to walk [to study hall] and a half-hour back. I lose an hour. Can you just let me out?’ And so he did, and I put it to good use.”

Burns returns to Charlottesville several times a year and follows his former team religiously. “I rise and sink with the fortunes of that football program,” he said.

He’s encouraged by what he’s seen from Bronco Mendenhall, who’s in his second year as UVA’s head coach.

“A lot of good things seem to be happening for UVA football,” he said. “I am looking forward to more of the hard-nosed, error-free football that the ’Hoos showed out in Boise as the season moves forward.”

He remains convinced that UVA can succeed in football without compromising its academic standards.

“Our football team should be vying for ACC championships and beyond. Our other sports are. If Stanford can do it, there’s no reason I see that we can’t do it.”

A Year We Will Never Forget: 2019-20 in Review END_OF_DOCUMENT_TOKEN_TO_BE_REPLACED

‘What Will You Carry With You?’ Remarks From UVA President Jim Ryan END_OF_DOCUMENT_TOKEN_TO_BE_REPLACED