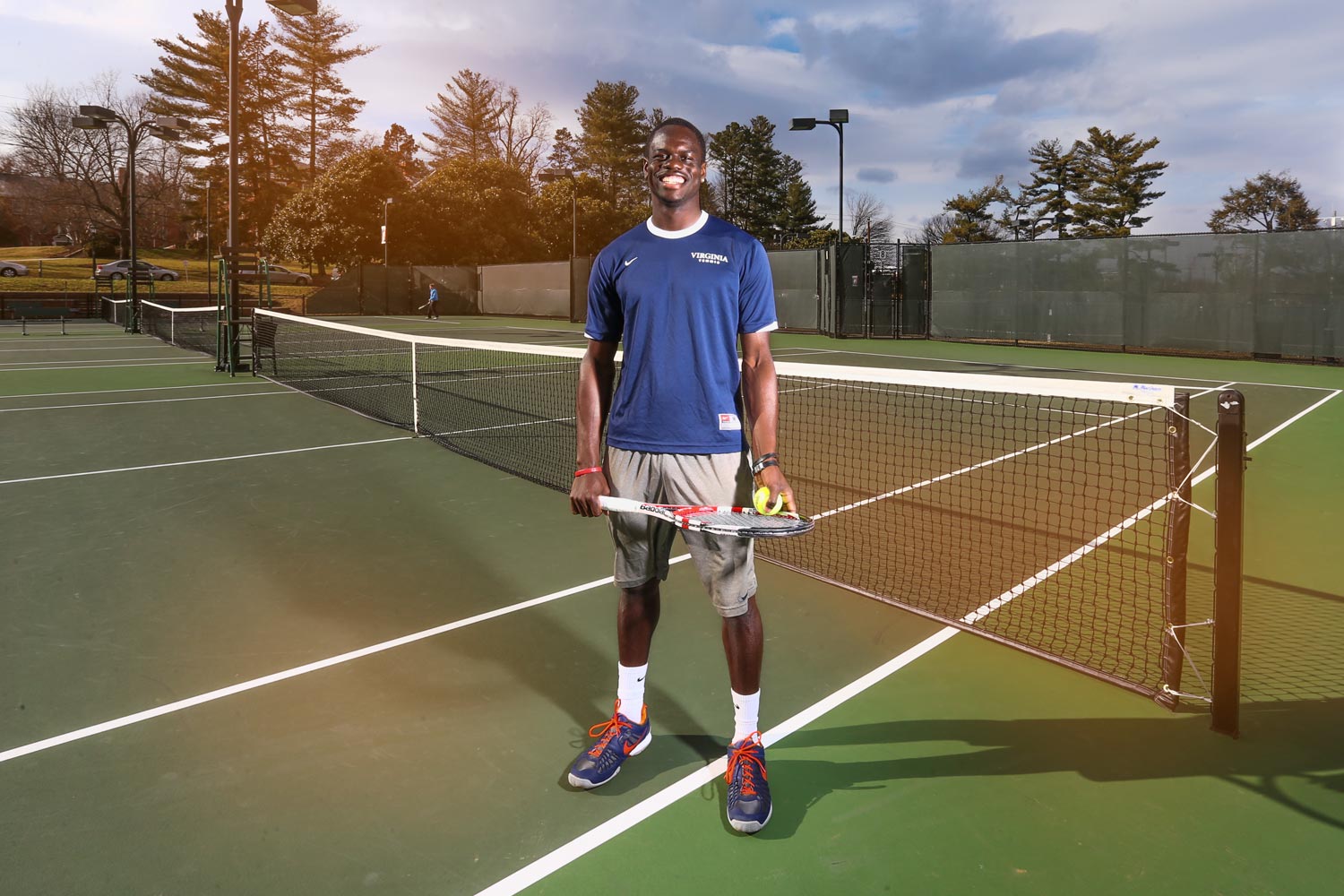 Jarmere Jenkins was sitting in a Philadelphia office in August, working a 9-to-5 job as an investment sales consultant, when the feeling hit him like an overhead slam to the midsection.

“I was having tennis withdrawals,” he recalled.

The former University of Virginia star, who had led the Cavaliers to their first NCAA championship in 2013, was in his first couple of months at an investment management company following a four-year run on the professional tennis tour.

For Jenkins, the transition was too sudden.

“I had been playing tennis since I was 4 years old,” he said. “To do that for so long and then just go cold turkey – it just didn’t sit well when I was in that office.

“I just felt like I had a lot more to offer the tennis world than I did the corporate world.”

In the fall, the tennis legend – who in September had her first child with UVA alumnus, Reddit co-founder and now-husband Alexis Ohanian – hired Jenkins to be her hitting partner as she chases a record-tying 24th grand slam singles title.

Jenkins, 27, is still pinching himself.

“It’s a little bit surreal at times to see her in person and to be on the court training with her,” Jenkins said. “I had always wondered how she got to be where she is today – and now I get to see the process she goes through and just connect those dots. I don’t have to wonder anymore.”

Jenkins, who was ranked as high as No. 190 in the world during his time on the pro tour, got the gig through his older brother, Jermaine, who is the hitting partner of Williams’ older sister, Venus.

Venus knew Serena was on the lookout for a new partner and would frequently ask Jermaine about what Jarmere – who she knew had done well on the tour – was up to. Eventually, Serena texted Jermaine to see if Jarmere had any interest. That led to Jarmere flying to France for a tryout under the watchful eye of Patrick Mouratoglou, Williams’ coach.

Jenkins’ blend of athleticism and power wound up being exactly what Mouratoglou was looking for.

Jenkins, one of nine children – his family was once featured on “Oprah” – grew up in Atlanta.

Coming out of the junior ranks, he thought about turning pro, but was ultimately attracted to the family atmosphere that former UVA coach Brian Boland fostered within his program. “If I would have gone pro, that would have been an awful decision. UVA definitely set me up both on and off the court to put me in the position that I am today – whether it was on the tennis side or academically,” said Jenkins, who majored in anthropology.

In 2013, Jenkins had one of the greatest seasons in school history, leading Virginia to the NCAA team title, winning a doubles crown with partner Mac Styslinger and making it to the singles finals – a campaign that culminated with Jenkins winning Atlantic Coast Conference Male Athlete of the Year.

“You just saw a machine out there,” recalled Andres Pedroso, UVA’s director of tennis and head men’s tennis coach, who was an assistant coach on the 2013 squad. “He left nothing on the court.”

As a pro singles player, Jenkins – despite missing one 10-month stretch with an Achilles tendon injury – won a few lower-level tournaments and reached the final round of qualifying at the U.S. and Australian Opens.

However, the travel required to take his game to the next level was too much of a financial burden – a challenge many players outside the top 100 face.

“The numbers weren’t adding up,” Jenkins said. “I would go out and play tournaments and do well, but I would come back in too much debt. I just decided to call it.

“I reached the point mentally, more so than physically, that it was time to move on.”

After deciding the investment sales job wasn’t for him, Jenkins began coaching a junior player in Puerto Rico. But while there, Hurricane Irma hit, forcing him to return to the U.S.

A short time later, Jenkins got the call from Serena. “It just worked out really well,” he said. “She was looking for somebody and I was available.”

As a fellow African-American player, Jenkins has looked up to Williams as long as he can remember. With another grand slam singles title, Williams would tie Margaret Court for the most in history. “In my perspective, she’s the greatest female athlete of all time,” Jenkins said.

While he declined to get into specifics of Williams’ training, Jenkins calls the 36-year-old’s regimen “meticulous.”

“Everything is set up for her, physically and mentally, to where she gets the best out of herself each and every day,” Jenkins said. “There is nothing she leaves up to chance. She takes care of every little detail. She’s super-serious about practice. She comes in, does what she needs to do and then she leaves and still has a life after that. How you see her in her matches is how she practices as well – with the same intensity, the same fierce look in her eye. She wants to be the best all the time. The Serena that you see playing on TV at Wimbledon is the same Serena that you’ll see on a random court in Florida training.”

The fact that Williams is married to Ohanian, a former Wahoo, was just a funny coincidence. Jenkins had met the tech titan a few years before through mutual UVA friends. “He’s a cool, cool guy,” Jenkins said.

Jenkins is living in West Palm Beach, Florida, where both Williams sisters train, though he will be spending a good deal of his time on the road once Serena returns to the tour, with next month’s Australian Open rumored to be on the itinerary. Williams won the event last year – while pregnant.

Pedroso believes Williams couldn’t have found anybody better than Jenkins as she approaches the twilight of her career. “There’s a reason why she’s won 23 grand slams,” Pedroso said. “She puts a great team around her – and Jarmere is a great choice.”

When his playing days are over, Jenkins thinks he wants to stay in tennis in some capacity, though right now he’s just focused on being a part of Team Serena.

“I just want to take every day and try and be the best that I can for Serena in accomplishing her goals,” he said.

What Is the ‘4th Side’? END_OF_DOCUMENT_TOKEN_TO_BE_REPLACED