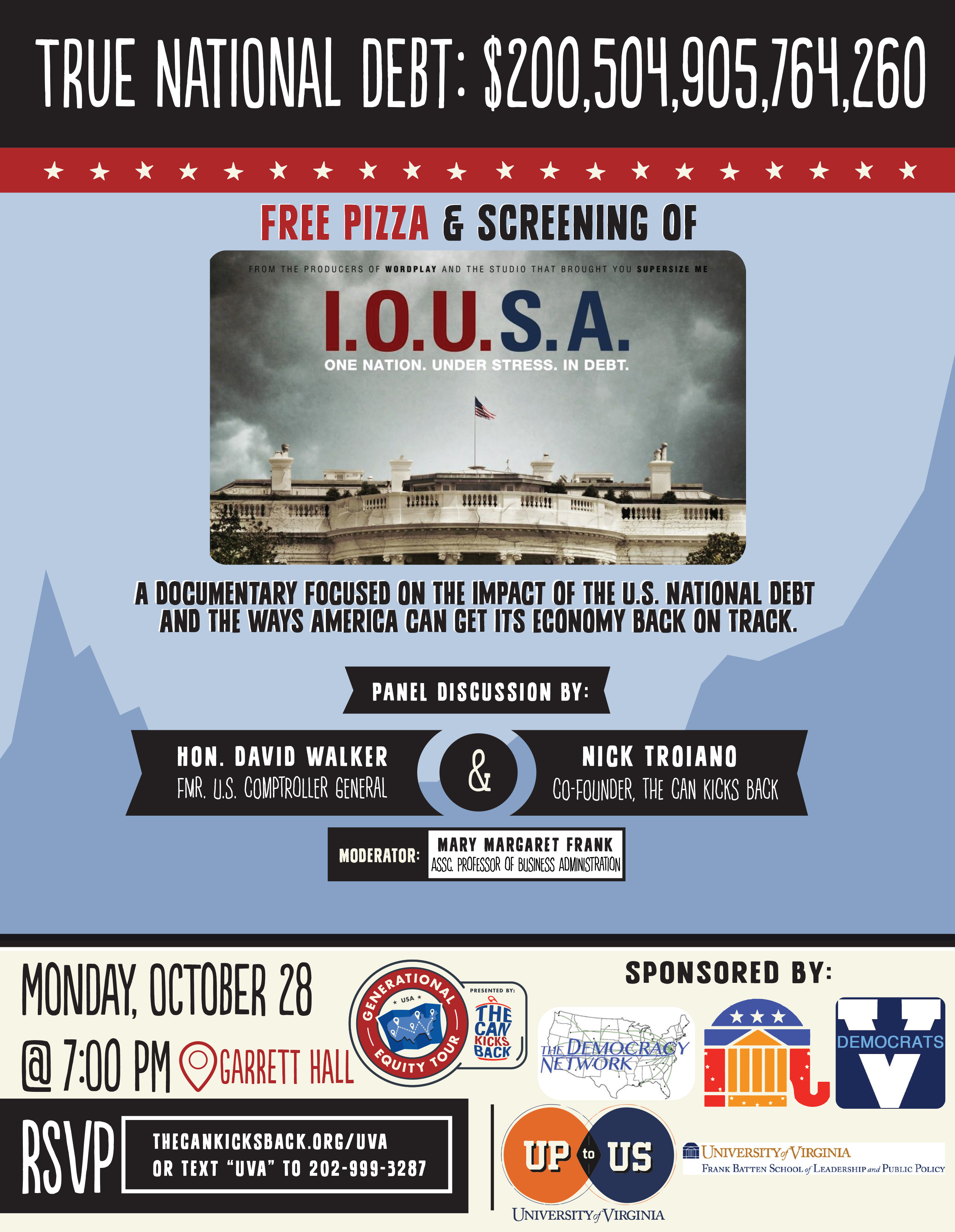 David Walker, former U.S. Comptroller General under President Clinton, will speak at the University of Virginia on Monday at 7 p.m. in Garrett Hall. He will discuss his calculation that the true size of the national debt exceeds $200 trillion when adjusted to include promised government benefits to current retirees that will far exceed what those Americans have paid in total lifetime taxes, leaving future Americans with a bill beyond their capacity to pay.

Walker will address how “to defeat the national debt and reclaim the American Dream” as part of a five-week, cross-country “Generational Equity Tour” organized by The Can Kicks Back, a non-partisan campaign led by young people that advocates for a fiscally sustainable and generationally equitable federal budget, according to the campaign.

Walker will be joined by Nick Troiano, co-founder of the campaign, in a discussion moderated by Mary Margaret Frank, an associate professor at the Darden School of Business and one of three academic directors of the school’s Institute for Business in Society. This semester, Frank is teaching an interdisciplinary course on the national debt, in which student teams will produce an online educational series about the national debt. “We in this country must not only create a dialogue across party lines, but also across generational lines,” Frank said.

The discussion will follow a screening of a shortened (30-minute) version of the documentary “I.O.U.S.A.” about the national debt, which prominently features Walker. The discussion will conclude with audience questions and an interactive poll. The event is free and open to the public, and pizza will be provided.

The Can Kicks Back campaign has published a 44-page report, “Swindled: How the Millennial Generation Will Pay the Price of Washington’s Paralysis,” that contends older Americans will receive government benefits far beyond their lifetime contributions. Over the course of her lifetime, someone who is 65 today will receive an average of $327,400 more in benefits than she paid in taxes, the report states. Consequently, the report forecasts today’s young workers will be stuck with a bill far beyond their capacity to pay. Future Americans’ lifetime net taxes will be $420,600 – a tax burden of 60 cents of every dollar they earn.

The tour seeks to build support for a bipartisan piece of legislation, the INFORM Act, which would require the government to annually disclose this information.

The event is sponsored by the Frank Batten School of Leadership and Public Policy, the University Democrats, the College Republicans, the Democracy Network and the U.Va. chapter of Up to Us, which was recognized by President Clinton in April for winning a nationwide competition to engage and educate college students about the federal government’s long-term debt.

At UVA, There Is a Club for Everyone END_OF_DOCUMENT_TOKEN_TO_BE_REPLACED