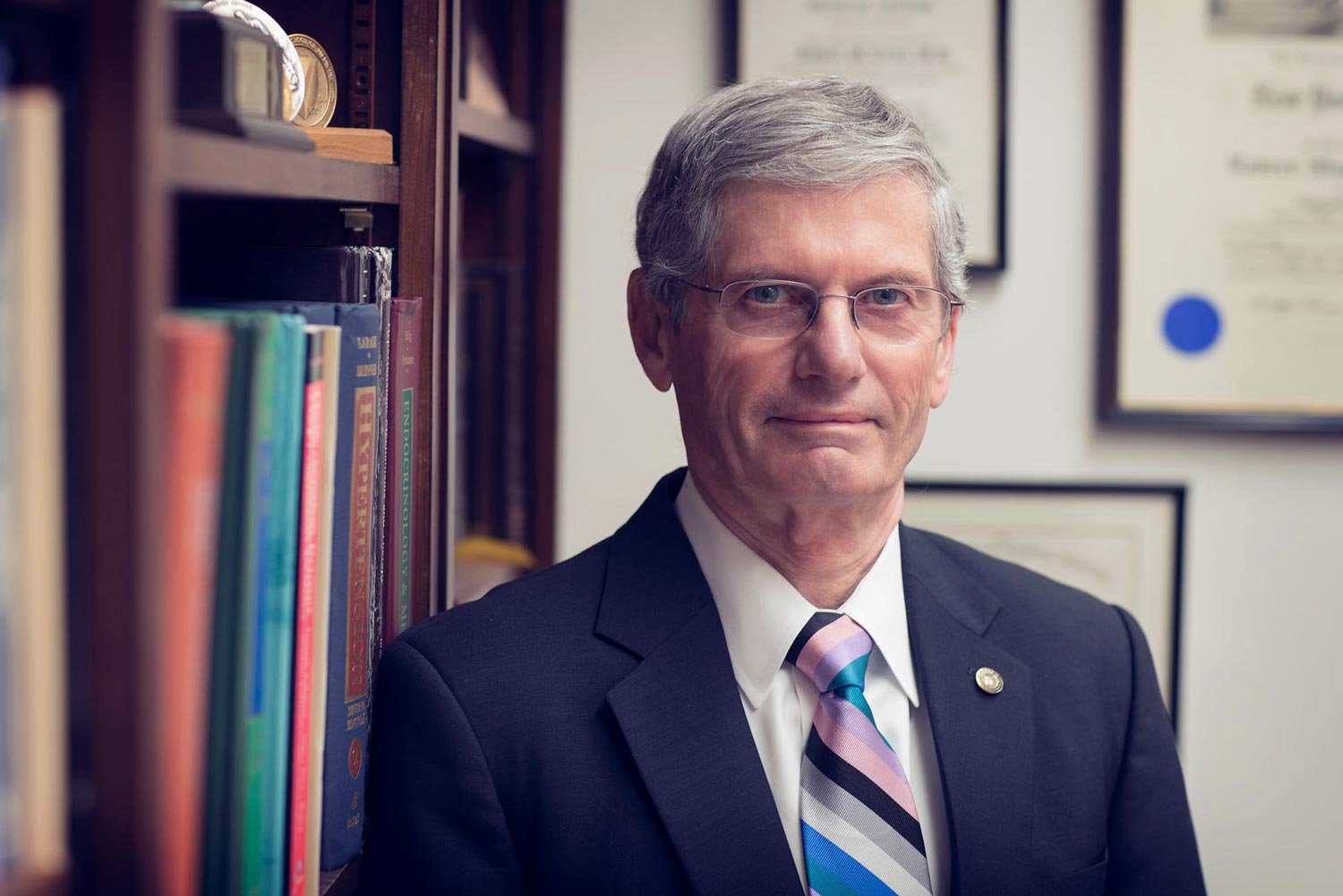 For Dr. Robert Carey – the co-chair of the committee that developed the guidelines and a former dean of the University of Virginia School of Medicine – it was the culmination of decades of work and what he called the most meaningful accomplishment of his long and illustrious career.

In the first update in 14 years, the American Heart Association, the American College of Cardiology and nine other groups redefined high blood pressure as a reading of 130 over 80, down from 140 over 90.

“The recommendations we made were substantial,” said Carey, 76, a professor of medicine in the Division of Endocrinology and Metabolism. “This is an opportunity to make a significant, positive difference for a lot of people.”

The wider net captures 46 percent of U.S. adults, compared to the 32 percent under the previous measure, meaning 103 million people are now considered hypertensive – up from 72 million.

The new criteria came from recent studies showing that lower blood pressure than numbers previously considered normal significantly reduces the chances of heart attack and stroke, as well as the overall risk of death.

The new guidelines will have a significant impact on how doctors diagnose and manage the condition, with an emphasis on early identification and prevention and a focus on lifestyle modifications rather than drug treatment, Carey said.

Suggested steps to reduce blood pressure for those new to the hypertensive category include weight loss, a heart-healthy diet, sodium reduction, potassium supplementation, restricting alcohol and exercising at least 150 minutes a week.

The significance of the three years’ worth of work that Carey put into the guidelines is hard to overstate. Heart disease is the leading cause of death among Americans, and high blood pressure is one of the top preventable causes of heart attacks and strokes, second only to smoking.

Carey, who has been studying and treating hypertension for nearly half a century, is optimistic that once the findings are disseminated and absorbed by doctors, it will have a lasting effect.

“It goes beyond the medical community and I hope it will have an impact on the public,” he said. “And I particularly hope that lifestyle modification will come through as a mechanism for lowering blood pressure.”

From Vandy to Dean

As his colleagues and family will tell you, Carey is remarkably humble and approachable for someone doing work that affects millions of people and who served for 16 years (from 1986 to 2002) as dean of UVA’s School of Medicine, making him the longest-serving dean in the school’s history.

Carey came to UVA in 1973 after receiving his medical degree from Vanderbilt University in 1965 and completing fellowships in endocrinology with Dr. Grant W. Liddle at Vanderbilt and in hypertension with Sir Stanley Peart at St. Mary’s Hospital Medical School (now Imperial College) in London, England.

Five years after he arrived, he became director of the Division of Endocrinology and Metabolism – a position he held until he was named dean in 1986 – developing the program into one of the best in the nation.

During his time as chief of endocrinology, Carey recruited Dr. Helmy Siragy, now a professor of medicine focusing on hypertension and diabetic kidney disease, for a work fellowship.

“One of the major attractions in coming to UVA was Dr. Carey,” said Siragy, who still works closely with him. “He’s a very impressive person and down to earth. He can really persuade you, and you’d never know he was trying to persuade you.”

He added that the lessons learned from Carey went well beyond the laboratories and classrooms.

“He taught me a lot. Significant knowledge, obviously, but also humanity, how to behave, how to accommodate others’ needs,” he said. “In 33 years, I’ve never seen him mad.”

Although Carey is most proud of his blood pressure work, he said serving as dean was his highest honor. And he made the most of it, ushering the Medical School through a period of tremendous transition and growth while focusing on supporting faculty and students; recruiting; building groups, departments and programs; and arranging interdisciplinary collaboration across Grounds. 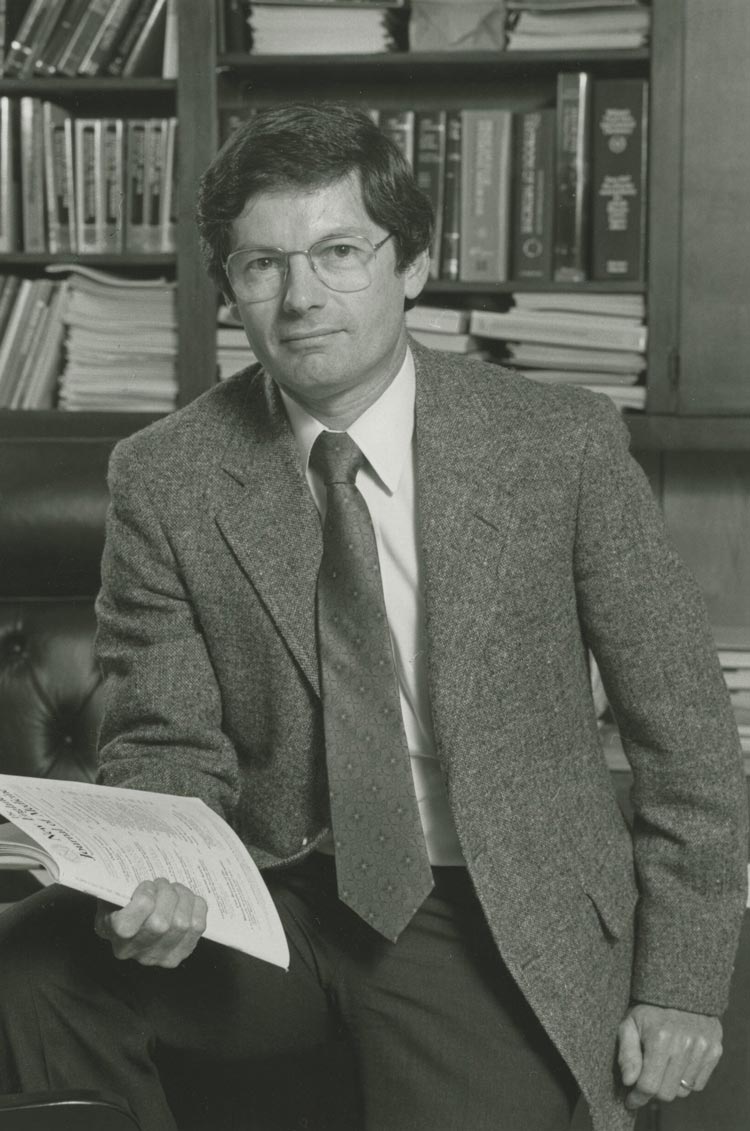 “I felt that was perhaps the best job I could have had,” Carey said. “It was an incredible privilege and opportunity to serve our faculty and students in the school. It really caused me to realize what incredible brainpower and energy our people have in the School of Medicine.”

Carey presided over the foundings of the departments of Public Health Sciences, Emergency Medicine, Radiation Oncology and Physical Medicine and Rehabilitation. He initiated numerous programs, developed new research centers in a variety of fields, oversaw the construction of four new research buildings and a conference center. National Institutes of Health funds to the School of Medicine quintupled, private fundraising increased 12-fold and 60 endowed professorships were established.

“Bob was the dean at a period when it was important to the University that the medical dean be both a practicing scholar and a practicing physician, as well as the dean,” UVA President Emeritus John T. Casteen III said.

“It was easy to admire him because he was not a showy dean,” Casteen added. “Bob was a quiet, thoughtful dean who knew what he had to accomplish and got it done, and in the process cultivated a generation of spectacular faculty.”

Even as Carey undertook the work of growing the Medical School at a pivotal point in its history, he made time for research and mentoring, operating with something of an open-door policy.

“Even as dean, I had access to him at any time of the day,” Siragy said.

Living in Pavilion VI on the Lawn with his wife Theodora, Carey also made time to nurture student development outside the classroom.

“They were very much involved in student life on the Lawn,” Casteen said. “They were in a sense for a lot of the students something like a foster family.”

Back to the Lab

After stepping down from the deanship in 2002, Carey chose to focus his energy exclusively on the blood pressure work that had brought him to UVA.

“Bob reached a point in his career when we needed him to be successful on the research side of his career,” Casteen said.

As it turned out, the move was good for Carey’s own blood pressure. Realizing that he was carrying too much weight after the deanship, he lost 15 pounds through dieting and running.

“My pressure came right down. I would be hypertensive today,” he said.

Dr. Shetal Padia met Carey in 2004 when she was exploring a fellowship in endocrinology and metabolism.

“At that point I had not had any basic science laboratory research experience at all. And he didn’t seem to care. He said, ‘That’s OK, if you’re interested in high blood pressure, come back and join the lab,’” she said.

“I would never have the research career I have right now if it weren’t for him,” said Padia, an assistant professor of medicine who continues to work closely with Carey in the Division of Endocrinology and Metabolism.

Padia and others who have worked with him say Carey’s focus, enthusiasm and persistence are remarkable and inspiring to younger generations of researchers, who he always makes time to mentor.

“His passion for hypertension is obvious. He lives, sleeps, breathes it,” she said.

“He could have 1,600 things going on and he makes you think that yours is the most important. He’s also a bit like a robot – we don’t know when he actually sleeps or eats.”

A Failure at Retirement

Carey attempted retirement in 2015. He was unsuccessful.

After receiving two NIH grants to continue his work on hypertension, he decided he wasn’t ready to hang up his lab coat just yet, though he did retire from clinical practice to allow more time for research.

“The year he tried to retire, he was on so many committees and things, he went into work every day anyway,” Theodora Carey said. “As my daughter says, as long as you don’t charge for something, they’ll keep asking you to do it – especially when you do it very well.” 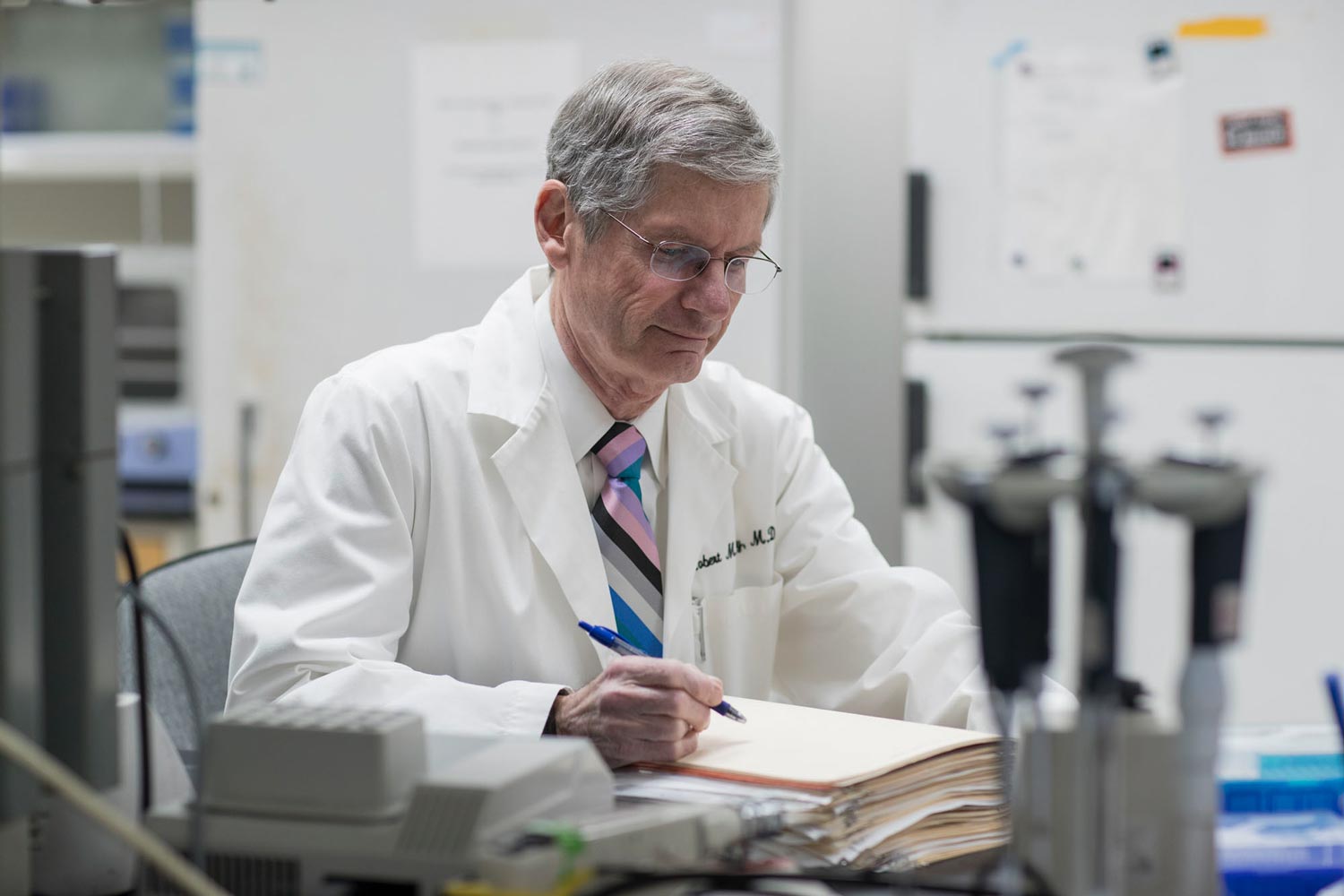 At 77, and on the heels of what he considers to be the most important work of his career, Carey still isn’t ready to step away just yet.

“I enjoy every minute of what I’m doing, and I like being around young people, trainees, so we’ll just have to wait and see,” he said.

Theodora said that in addition to his passion for his work, part of his reluctance to retire is borne out of a loyalty to the University.

Despite being courted by several institutions throughout his career, especially his time as dean, Carey has always remained committed to UVA.

“He felt like his allegiance was here and he could do his best work here,” she said.

The explanation, he said, is simple.

““This is my intellectual and professional home.”

Here Is What You Need to Know About the New Coronavirus Variant, Omicron END_OF_DOCUMENT_TOKEN_TO_BE_REPLACED

Fall Is in the Air on Grounds END_OF_DOCUMENT_TOKEN_TO_BE_REPLACED

Meet the Cats and Dogs Your CVC Donation Supports END_OF_DOCUMENT_TOKEN_TO_BE_REPLACED