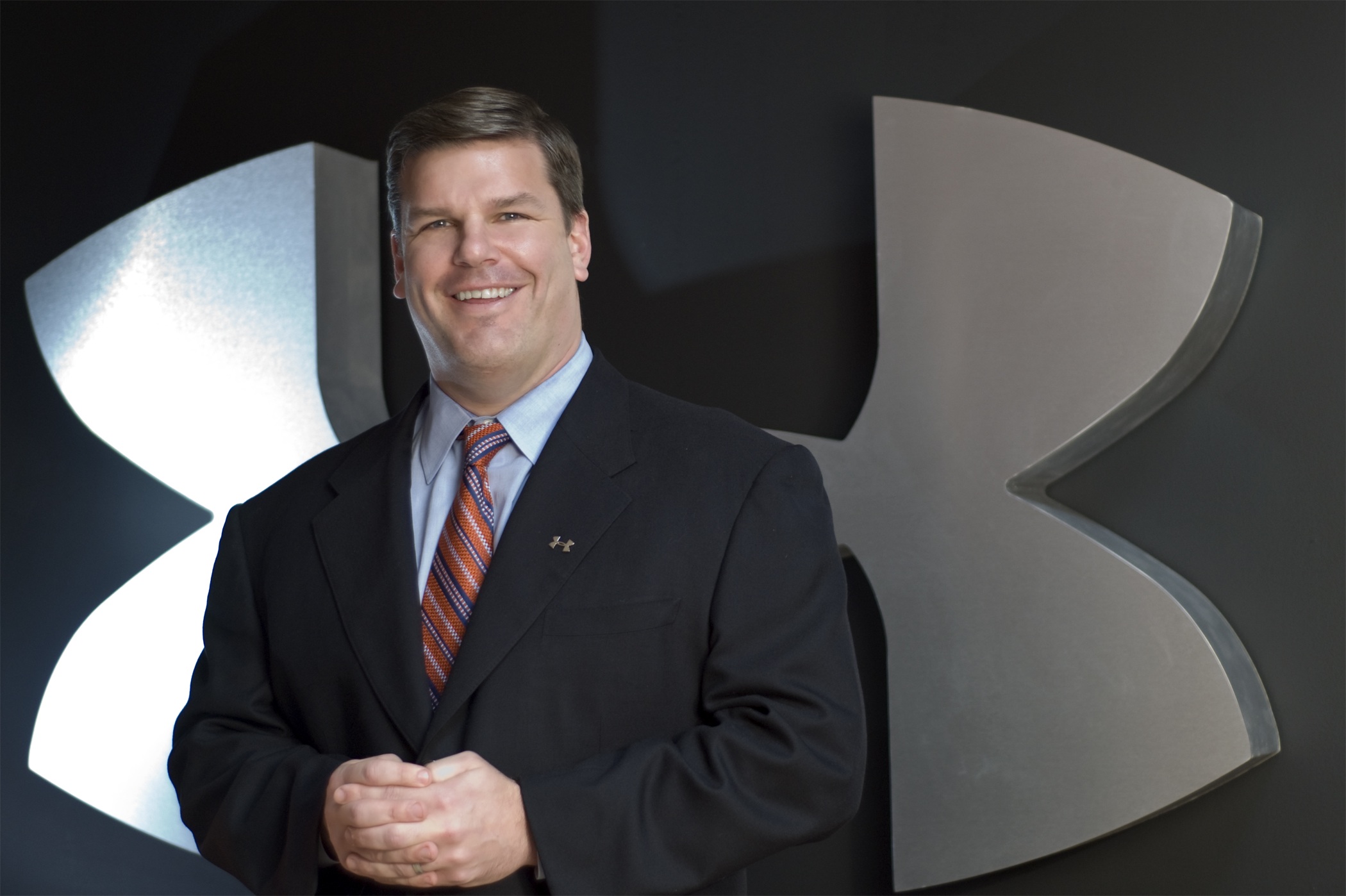 Ryan Kuehl is on the road again. On the current trip, he’ll meet with the international press, check out the retail end of things in the U.K. (where business is up 73 percent), meet with partners and maybe play a little golf. This is the life of a marketing professional for a major corporation.

Kuehl, a former lineman on the University of Virginia football team and a former long snapper for NFL teams like the Washington Redskins and the New York Giants, is a 1994 graduate of the McIntire School of Commerce.

Since retiring from football, he’s risen to become vice president of sports marketing and sponsorships for Under Armour Inc., the upstart athletic apparel company that’s taken its place among established brands like Nike, Reebok and Adidas.

Kuehl said he believes in making your own luck and attributes part of his success to his ability to do just that.

“I think my biggest strength is I’m extremely self-aware. I know what I am and I know what I’m not.” He’s not afraid to ask questions and he takes his self-awareness into the business world daily. He said he believes being a good teammate and building a solid team are the hallmarks of a great leader.

When he’s not on the road, Kuehl, along with his wife, Kimberly (the former Kimberly Dunham, a 1994 graduate of the College of Arts & Sciences and a women’s lacrosse player), live in Maryland with their three children. He’s still connected to U.Va. athletics as a member of the Virginia Athletics Foundation, and continues to work with the men’s and women’s lacrosse teams.

UVA Today caught up with Kuehl just before he left for Scotland, where he hoped to squeeze in a few rounds of golf while he prepares with Team Under Armour for the upcoming British Open.

A. I had a great experience playing football for Coach [George] Welsh and being a part of a strong team – I’m real proud of that and what we accomplished. The dream was always to play in the NFL and I was going to give it every chance I had. I’m happy with the way things transpired – I played in the NFL for 12 years and then I transitioned to Under Armour.

Q. You seem to be adept at transitioning – going from defensive lineman to long snapper and then off the football field to the offices of Under Armour. How did you successfully navigate going from one role to the next?

A. The biggest thing is I never really thought of myself as a football player or an athlete. I just thought I was going to work like anybody else. For me, it was always about the next step. Football was just a head start and I used every opportunity I could to further myself, whether through networking, through education or through extending my NFL career as far as I could. I’ve always had a forward-thinking mind and was just never one to settle.

Q. You earned a degree from the McIntire School. How did it prepare you for what you’re doing now?

A. McIntire did such a great job, particularly with two things: group work and case studies. Twenty years later and I still remember how group work, teamwork, taught me that you’ve got to be flexible. You’ve got to be able to work with people, and I think the group-work mentality that they have at McIntire is key.

Case studies give you exposure to real-world situations. It’s not all written in textbooks, so the case studies we looked at and learned from were as close to the real world as you could get.

Q. Under Armor has signed big-name sports stars like Stephen Curry, and you’ve received a lot of attention for signing 2015 Masters champion Jordan Spieth early. Describe what you look for in someone who may eventually represent your brand.

For universities, I look at what they see in us. Are they forward-thinking? We’re not as big as Nike or Adidas, but we’re on the rise.

Q. You’re a big-time U.Va. fan. Which sports or players are you following most closely?

A. Athletics has had a tremendous year, from team accomplishments to individual accomplishments. Morgan Brian in the World Cup, national championships in tennis, soccer and baseball – all of these things make the alumni proud, and it makes me proud just to see kids out there playing the right way, coaches coaching the right way and representing the community in the right way. So, when you do that, and then win on top of it, it’s really a cool thing.

Q. What’s your fondest memory of your time on Grounds?

A. On Grounds, it’s really about the spring afternoons when you’re walking through the colonnades onto the Lawn. That, to me, was the quintessential U.Va. experience. Athletically, playing at Scott Stadium, running onto the field, that was just the best.

A lot of the McIntire School teachers were season ticket-holders. Probably one of the best things is when we’d beat a rival school, we’d come in on Mondays and get a wink and a “good win” from the teachers. That, to me, was cool. That sense of community, knowing everyone is pulling for you, motivated us to play harder because we knew we had people who counted on us to play well and represent the school well.

A Year We Will Never Forget: 2019-20 in Review END_OF_DOCUMENT_TOKEN_TO_BE_REPLACED

‘What Will You Carry With You?’ Remarks From UVA President Jim Ryan END_OF_DOCUMENT_TOKEN_TO_BE_REPLACED