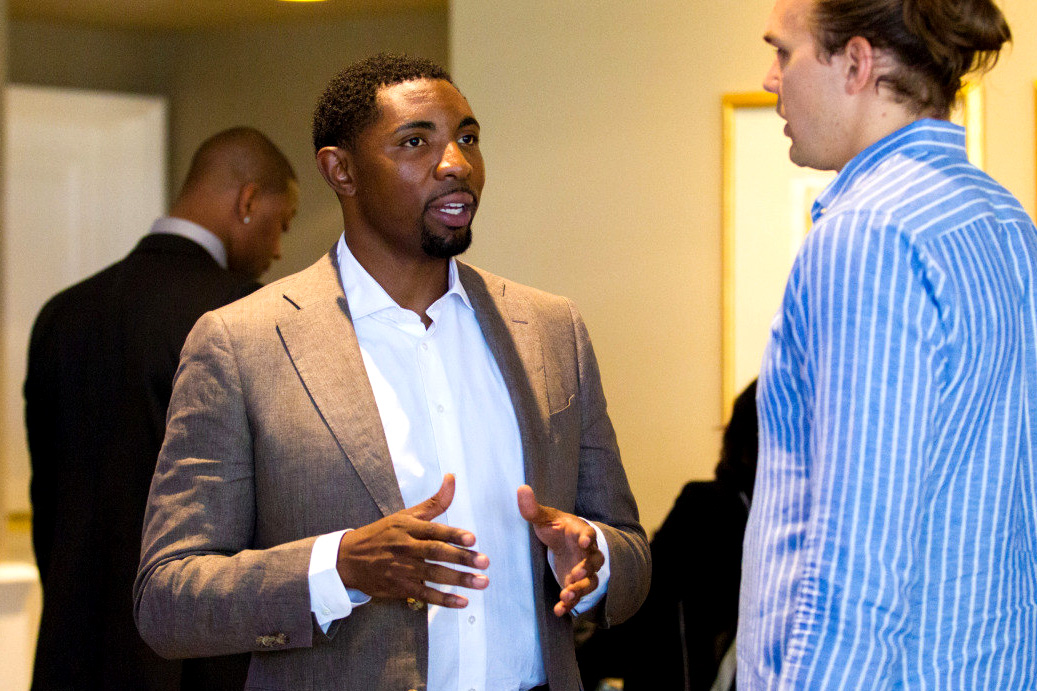 Fifteen years later, Roger Mason Jr. still thinks about his only appearance in the NCAA men’s basketball tournament and considers how his college career could have unfolded differently. Mason was a sophomore guard on the University of Virginia team that, as a No. 5 seed, lost 86-85 to giant-slayer Gonzaga University in a first-round game in Memphis, Tennessee.

The 2000-01 Cavaliers, coached by Pete Gillen, had a deep, talented roster that included Mason, Adam Hall, Chris Williams, Donald Hand, Keith Friel and Travis Watson. Had they defeated Gonzaga, standing between the Wahoos and the Sweet Sixteen would have been a No. 13 seed, Indiana State.

“That was a tough game,” Mason said of the loss to Gonzaga, “and I do think about what would have been, particularly the next year when we didn’t have a healthy Adam Hall, and we just couldn’t get it together. You wish you got further, but that’s for the history book.”

As a junior, Mason led the Cavaliers in scoring, but the team struggled late in the season and finished a disappointing 17-12 after losing in the NIT’s first round.

For Mason, a 6-foot-5 guard from Silver Spring, Maryland, that was his final college season. He entered the NBA draft in 2002, and the Chicago Bulls selected him with the 30th overall pick.

A long NBA career followed, during which Mason played for Chicago, Washington, San Antonio, New York, New Orleans and Miami. His playing days are behind him, but the NBA still dominates Mason’s professional life.

“It’s funny, when I was a player, I never thought about working for the union,” said Mason, 36. “It was never my goal or a dream of mine. I always thought I’d either be a general manager or maybe go into ownership or something else. But I really just organically fell in love with being a representative for players and fighting for player rights.

“At this point, I’m living a dream job, to be the deputy executive director of the players’ association at a time when our game is doing so well. We have the ability to really effect positive change, both in the community and with our guys. As far as the future, I have no idea what’s in store, but I know one thing: I’m loving being able to do this and work under Michele and work for our great players.”

Mason, who still has family in the D.C. area, returns to Charlottesville from New York City where the association is headquartered at least a couple of times each year. When he was in school, the Cavaliers played their home games at University Hall. Since 2006, the basketball program has been based at John Paul Jones Arena, and under head coach Tony Bennett’s leadership Virginia has become a national power. (The Cavaliers open their 2016-17 season on Friday, traveling to face the University of North Carolina-Greensboro.)

“It’s always fun to come back and to know that I had a hand in getting the arena built,” Mason said, “and [reflect on] the success we had, Coach Gillen and Travis and the rest of my teammates. It’s always fun to see what we helped establish, and Tony’s done a great job taking his program to a new level.”

The Cavaliers’ current coaching staff has been welcoming, Mason said. “It’s always tough when the coach you played for is long gone, so there’s not that emotional connection. But Tony has been great, and he’s been real good to me when I come down there, so we have a nice relationship.”

For nearly a decade, the NBPA’s annual Top 100 camp for elite high school players has been held at JPJ. Mason oversees the camp, and so he was in town in June “working and making sure that folks were doing their job and seeing ways that we can improve the camp moving forward.”

Mason said he keeps up with several of his former UVA teammates, among them Watson, Hall, Josh Hare and Majestic Mapp.

After focusing on economics during his first two years at UVA, Mason transferred into the School of Architecture, where he studied urban planning. He completed work on his degree after leaving the University.

“I wouldn’t have this job right now if I hadn’t,” Mason said. “It had its challenges, but I’m happy I was able to get it done.”

During his 10 seasons in the NBA – he also played professionally in Greece and Israel – Mason grew increasingly active in the players’ association.

“The first time I was a player rep actually was in 2007,” he recalled. “I had been an alternate before that. But I’ve always been interested in the business [of the sport], and after I watched an agent overcharge me, I said, ‘I want to dig in deeper and understand the business.’ Once that happened, I naturally became more of a player advocate.”

In February 2014, Miami traded Mason to Sacramento, which then waived him. At that point, Mason recalled, he expected to play for another two or three years. But during the controversy over racist remarks made by Donald Sterling, who then owned the Los Angeles Clippers, the NBPA’s president, Clippers guard Chris Paul, couldn’t speak on behalf of the players, so Mason took on a leading role.

He delivered a speech in Los Angeles to which current and former players, including Magic Johnson, LeBron James and Kareem Abdul-Jabbar, responded enthusiastically, Mason said.

“We were also dealing with stuff with our former executive director, and we were looking for a new executive director,” Mason said. “So going through that process and interviewing folks, along with the Sterling situation, made me realize that I loved the union and I loved fighting on behalf of players.

“When we hired Michele, I was contemplating continuing to play, but she told me she wanted me to be her deputy executive director. And so I turned down continuing my playing career in favor of starting my career as an executive.”

“The campus and the school and the education that I got while I was there, I truly appreciated it,” Mason said. “I didn’t have much of a social life, because all I was focused on was getting good grades and making it to the NBA. And so I think my social side of things kind of failed, but it all worked out. I made it to the NBA, and I had [a long] career. Something worked out, that’s for sure.”

A Year We Will Never Forget: 2019-20 in Review END_OF_DOCUMENT_TOKEN_TO_BE_REPLACED

‘What Will You Carry With You?’ Remarks From UVA President Jim Ryan END_OF_DOCUMENT_TOKEN_TO_BE_REPLACED