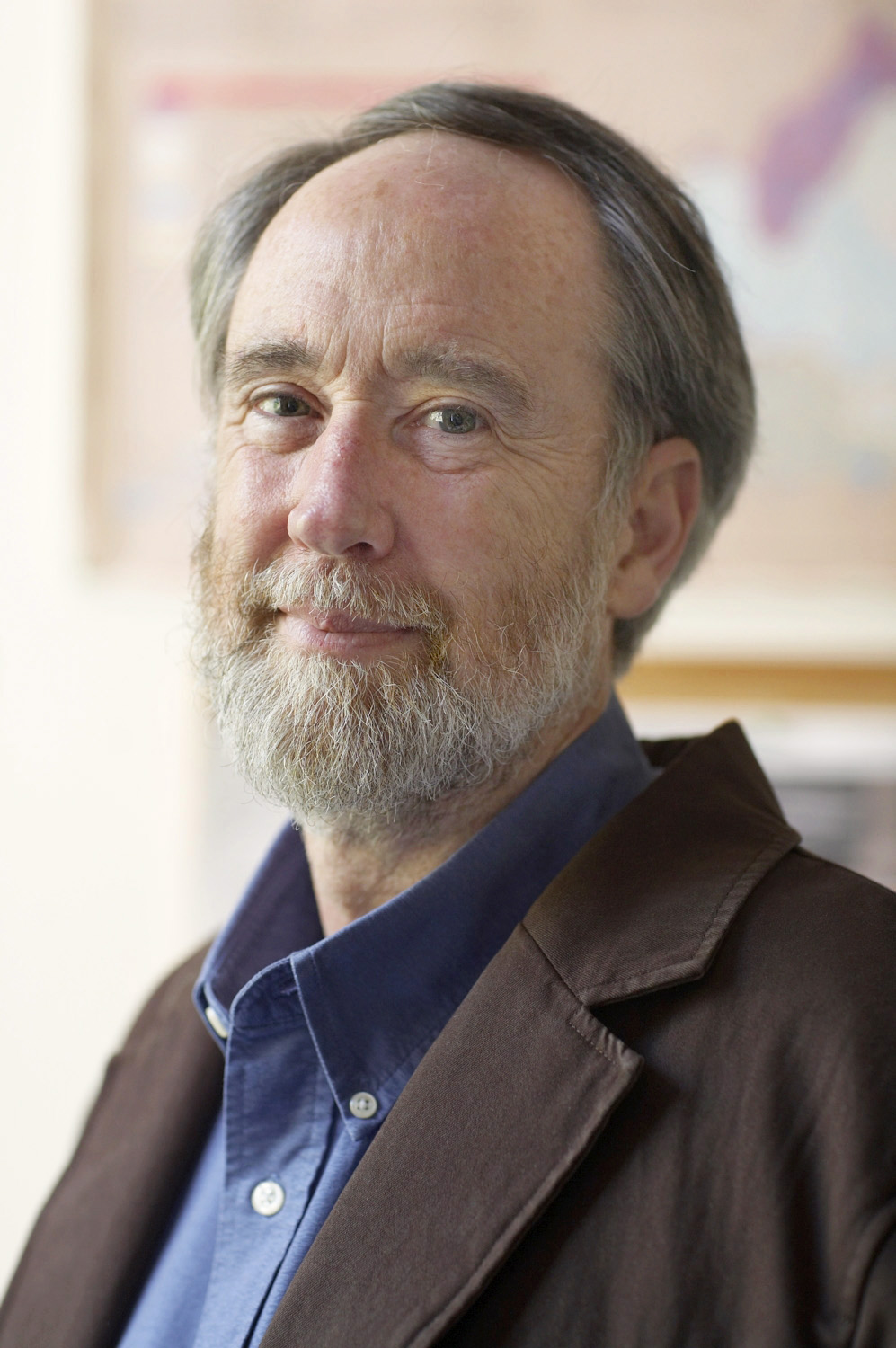 May 19, 2012 — The recipients of the 2012 Algernon Sydney Sullivan Awards at the University of Virginia are Madeline Tolmie and Ari Dimas, who will graduate Sunday, and P. Paxton Marshall, professor of electrical and computer engineering.

They were honored today during Valedictory Exercises on the Lawn, along with several students chosen by their 2012 classmates for special recognition. The Fourth-Year Trustees also presented to President Teresa A. Sullivan their class gift of $578,538, the second-highest total ever, given by 64 percent of the students – an all-time record for participation. The graduates and their guests heard from Val Ackerman, founding president of the Women's National Basketball Association and 1981 College of Arts & Sciences alumna.

The Sullivan Awards were presented by Bill Wilson, religious studies professor in the College, who chaired the awards committee.

"The committee this year had an extraordinary number of excellent nominees, and we can all take pride in knowing that there are so many devoted, talented, and selfless citizens in our community," he said. "It was a difficult job sorting out the winners, but we know we found the right people."

"She continuously looked into the future knowing that there was always more that could be improved and more lives to change for the better," Wilson said.

Tolmie held several leadership positions in the Global Development Organization and served as the global development studies representative on the College Council. She also spoke to younger students, encouraging them to consider the major.

She helped lead a Jefferson Public Citizens project that assessed the needs of special-needs children in the rural, marginal communities of the Bushbuckridge region in the Limpopo province of South Africa. She spearheaded Disabilities Awareness Week at U.Va., and throughout the year championed fellow students with disabilities through advocacy and education.

After graduation, Tolmie will teach special education with Teach for America in Atlanta. "I strive to live beyond myself and hope that someday I can live up to all that this award entails in honor of Algernon Sydney Sullivan," she said.

Ari Dimas, a College student double-majoring in philosophy and sociology and a member of the men's soccer team, has largely concentrated on uniting the student-athlete lifestyle with non-athlete culture.

"Ari's leadership as a Student Athlete Mentor for three years has been as exemplary as his athletic prowess," Wilson said. "When the scores are long forgotten, he will be recalled as the humble gentleman who made sure others would succeed and receive the accolades."

As a first-year student, he played soccer as a scout for the women's team. He was asked to try out for the men's team as a walk-on, and played for three years, including on the 2009 NCAA and ACC championship team.

Dimas took on major roles with Madison House, 'Hoos for a Cure, Third-Year Class Council, Sexual Assault Board and numerous other organizations. For three years he gave many hours to the First-Year Seminar program to ensure that new students had a chance to meet faculty and upper-class students in a setting that instilled confidence and lasting friendship.

This spring, he was selected as a sociology intern in President Sullivan's office. Though he will graduate Sunday, Dimas plans to return next year for a final season of soccer while pursuing graduate work.

"I am little without my family, close friends and colleagues," he said. "This is as much an award for those who have impacted my life as it is for me."

Paxton Marshall has "enlightened, enabled and ennobled," Wilson said, citing his courses on engineering in community, renewable energy and energy efficiency in commercial buildings; through leadership and collaboration with local energy initiatives and University Energy and Utilities; and through countless committees and dedicated student mentoring.

A professor in the School of Engineering and Applied Science, Marshall has been in the forefront of ecoMOD – a project to design, build and evaluate affordable, prefabricated homes based upon sustainable design principles – and innumerable other initiatives.

"Paxton is a man whose conviction and foresight, combined with deep caring for his fellow man, has enabled him not only to educate, but inspire, a generation of engineering students," Wilson said.

Marshall believes in the value of things that transcend position, influence, career and peer recognition, Wilson said. "As one of his close colleagues remarked, 'Paxton has dismissed the trappings of being a full professor; he has moved beyond this, guided by a set of deeply held personal values.'"

Each year, the Algernon Sydney Sullivan Foundation sponsors the presentation of awards at 54 colleges in the southeastern United States to individuals who have served others, their institutions and their wider communities.

Created in 1925, the awards are given to two distinguished fourth-year students and a member of the University community in memory of the award's namesake, a New York lawyer, businessman and philanthropist. The awards are intended to perpetuate the excellence of character and humanitarian service he epitomized.

The Fourth-Year Class Trustees presented their awards for community service, cultural fluency and being an unsung hero.

The recipient of the Community Service Award is Samantha "Sammy" Chao, who not only became program director of Charlottesville Area Riding Therapy, but also head program director for all of Madison House's recreational therapy programs, which provide "specialized recreation, rehabilitation and companionship services to those in need." She is also an EMT and serves as the membership committee chair for the Charlottesville-Albemarle Rescue Squad. A College student, she will receive a bachelor's degree in cognitive science.She’s remaining in Charlottesville as a rescue squad volunteer and recruiter and plans to become a physician assistant.

The Cultural Fluency award, which recognizes students who have created and promoted relationships with people from a variety of cultures and backgrounds, went to Aashish Edakadampil. A native of Mumbai, India, he created his own major, "transnationalism through film, theater and literature," in which he studies various disciplines with the goal of emphasizing the beauty of multiculturalism. He directed, edited, shot and performed in "My Land," a song and music video exploring the perspectives of six individuals from four continents.After graduation, he will be a videographer for Virginia Magazine and intern with filmmaker Jay Lavender.

Katherine Marsh received the Unsung Hero Award for going out of her way to stand up for others and providing assistance whenever it's needed. She has been involved in the Confidential Crisis Hotline, Madison House Big Sister program, Young Women Leaders Program and Camp Kesem, a student-run camp for children whose parents have cancer. She will graduate from the College with degrees in psychology and studies in women and gender.She plans a career in social work.

Nick Nelson, who took a bachelor's in economics from the College and will take a master's in commerce in August from the McIntire School, received the Louis A. Onesty Memorial Scholar-Athlete Award from the Seven Society. Nelson was captain of the wrestling team for two years, leading the team to second- and third-place finishes at the ACC championships. He also served as president of the ACC Student-Athlete Advisory Council and was a volunteer wrestling coach for local elementary school students.

The Seven Society recognized the Latino Student Alliance with the James Earle Sargent Award, which goes to a student or organization making major contributions to the University. The alliance organized multiple events this year that have helped to increase awareness of Latino culture on- and off-Grounds. They co-sponsored a discussion of the DREAM Act, which would grant eventual permanent residency to children of illegal immigrants who attend college or serve in the Armed Forces. Other events focused on Latinos in education, particularly higher education. Accepting the award was outgoing chair Alexa Proffitt, who will join Teach for America after graduation.

Gordon C. Burris, who over 45 years has served the University in capacities ranging from physical education instructor and coach to assistant dean of admission to senior assistant to two presidents, received the Gordon F. Rainey Award Jr. Award for Vigilance to the Student Experience. The award is presented by the Society of the Purple Shadows.

In Memoriam: Life of Drama Professor To Be Honored Sunday END_OF_DOCUMENT_TOKEN_TO_BE_REPLACED