Game On: Look Back at Basketball and Football Classics on ‘Wahoowa Saturday’ 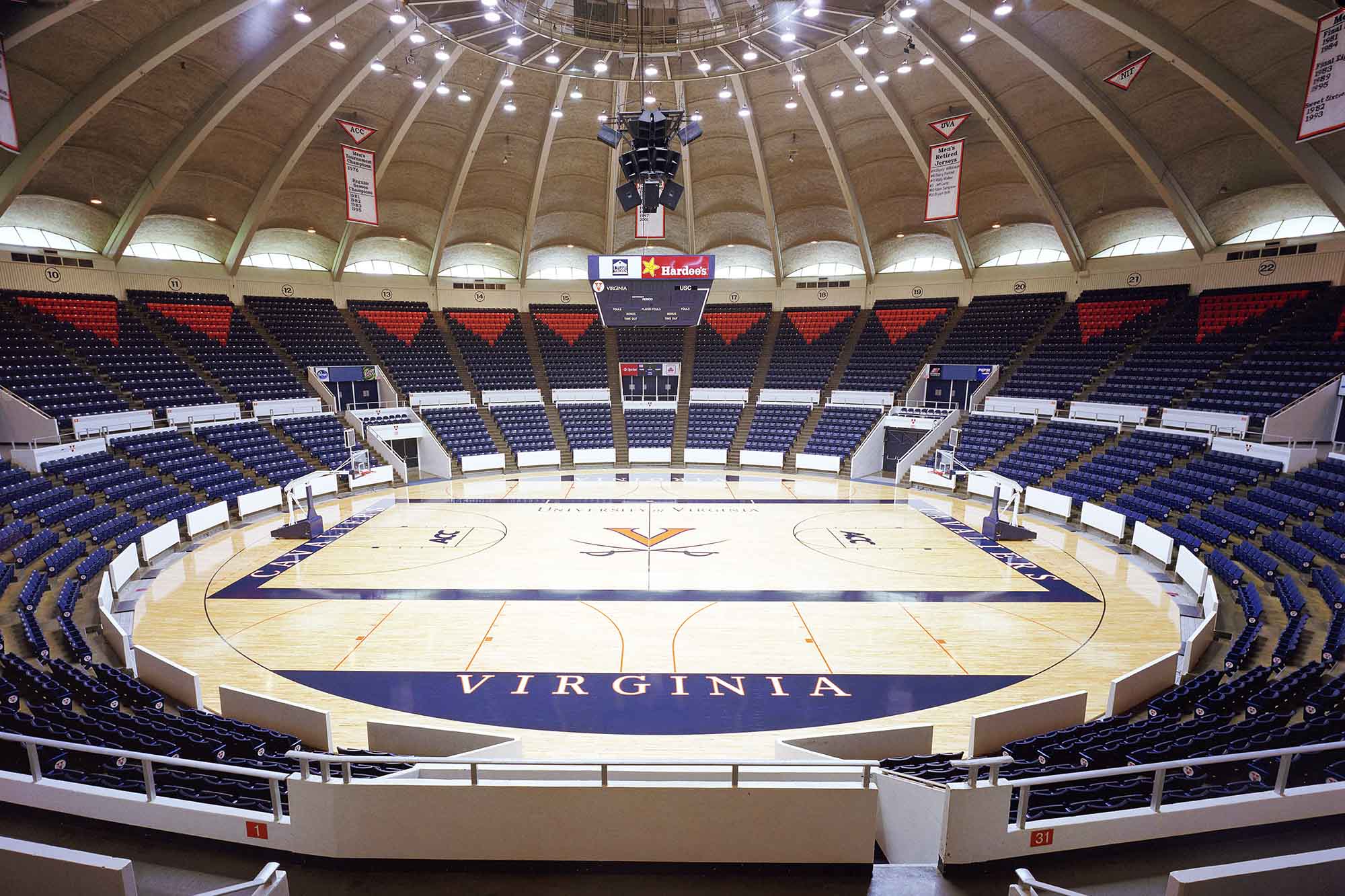 Televised sports – or at least sports-related content – have been a treasure trove for many people during the COVID-19 global pandemic.

With most college and professional sports leagues shut down, sports fans have instead consumed a 10-part ESPN documentary on NBA great Michael Jordan and the Chicago Bulls dynasty, or tuned in to last weekend’s live golf event featuring Tom Brady, Peyton Manning, Tiger Woods and Phil Mickelson, which raised $20 million for pandemic-related charities.

On Saturday, the University of Virginia athletics department will get into the action, rebroadcasting several classic Cavalier basketball and football games as part of a virtual event, “Wahoowa Saturday.”

The all-day event, a prelude to the “Wahoowa Virtual 5K” on Wednesday gets underway at 10 a.m. and is scheduled to conclude just after 7 p.m. It will also feature a virtual tailgate, a watch party featuring the 2007 football team, various contests and prizes, and a singing of “The Good Old Song.” Fans can access the events on a number of platforms, including the ACC Network, Twitter, Facebook, YouTube, the Virginia Sports App and WINA radio (1070 AM and 98.9 FM) in Charlottesville.

“One of the benefits of sport is that it brings people together to share a common experience,” said Todd Goodale, UVA’s senior associate athletics director for external affairs. “Wahoowa Saturday and the Wahoowa 5K are events designed to do this while we’re apart. We look forward to UVA fans everywhere enjoying and participating in these virtual events over the next week.”

For a look back at the classics scheduled to re-air as part of Wahoowa Saturday, UVA Today caught up with Roanoke Times sportswriter Doug Doughty. The UVA alumnus, who was inducted into the Virginia Sports Hall of Fame in 2018, covered every one of the selected games.

Here’s what to watch out for. 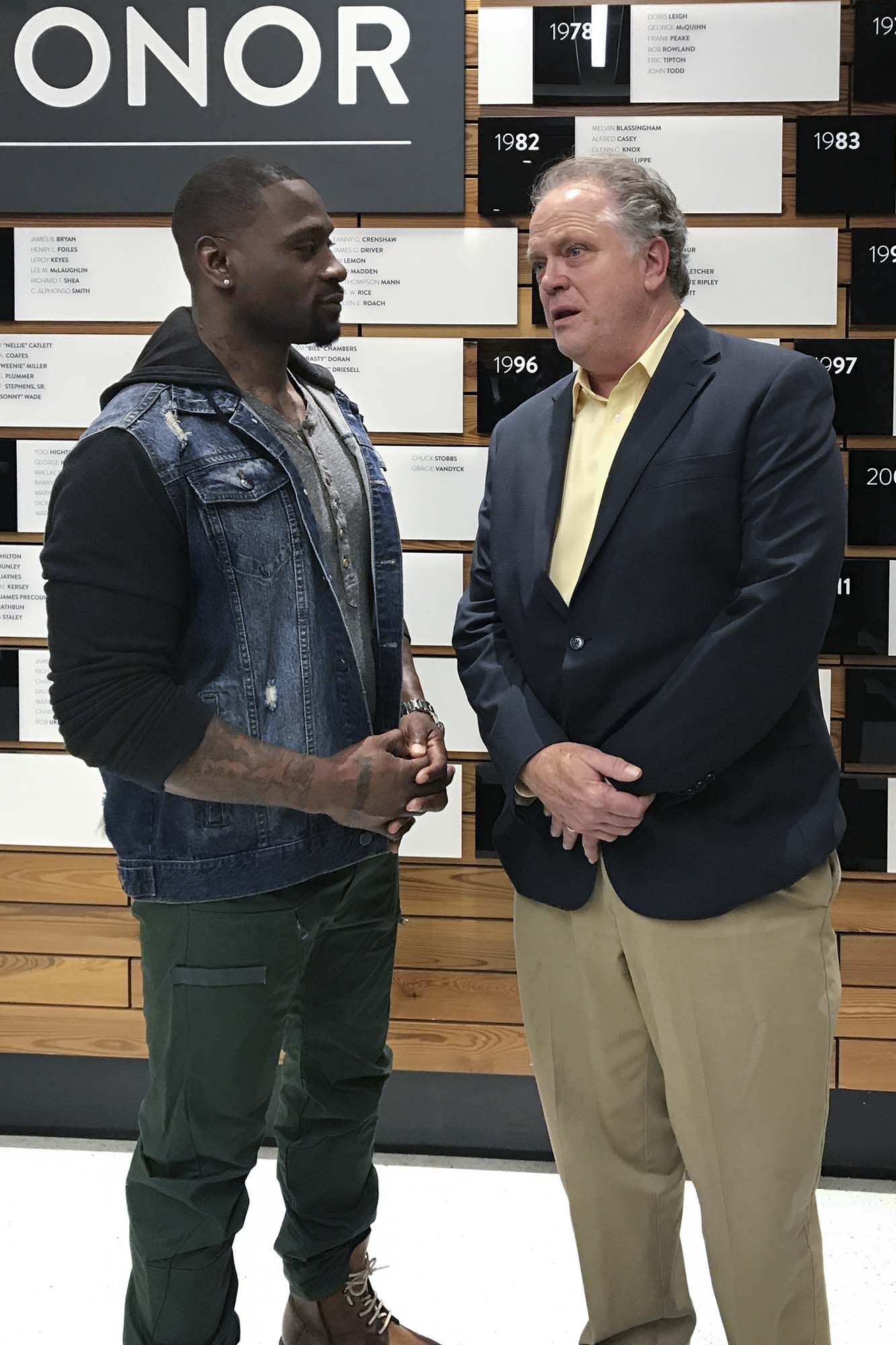 The skinny: In an early-season meeting between college hoops behemoths, No. 1-ranked UVA – led by legend Ralph Sampson – defeated No. 3 Georgetown and Patrick Ewing, 68-63, in front of a crowd of 19,035 at the Capital Centre in Landover, Maryland, to improve to 6-0 on the season.

Doughty: “Sports Illustrated wanted Ewing and Sampson to pose in boxing gloves before the game, which they declined. You had two of the best players ever. Sampson finished with 23 points, 16 rebounds and seven blocks. Ewing had 16 points, eight rebounds and five [blocks].

“What jumped out at me was how testy [Georgetown head coach] John Thompson was after the game. He was not happy at all.”

The skinny: In his final UVA home game, Sampson led the Hoos to an 83-81 win over the archrival Terrapins at University Hall.

Doughty: “Ralph was fouled with a few seconds left and missed both free throws. Craig Robinson tipped it back to Ralph, who hit a short jumper to win the game. Robinson saved what could have been a real downer. Ralph’s jersey was retired in a ceremony following the game.” 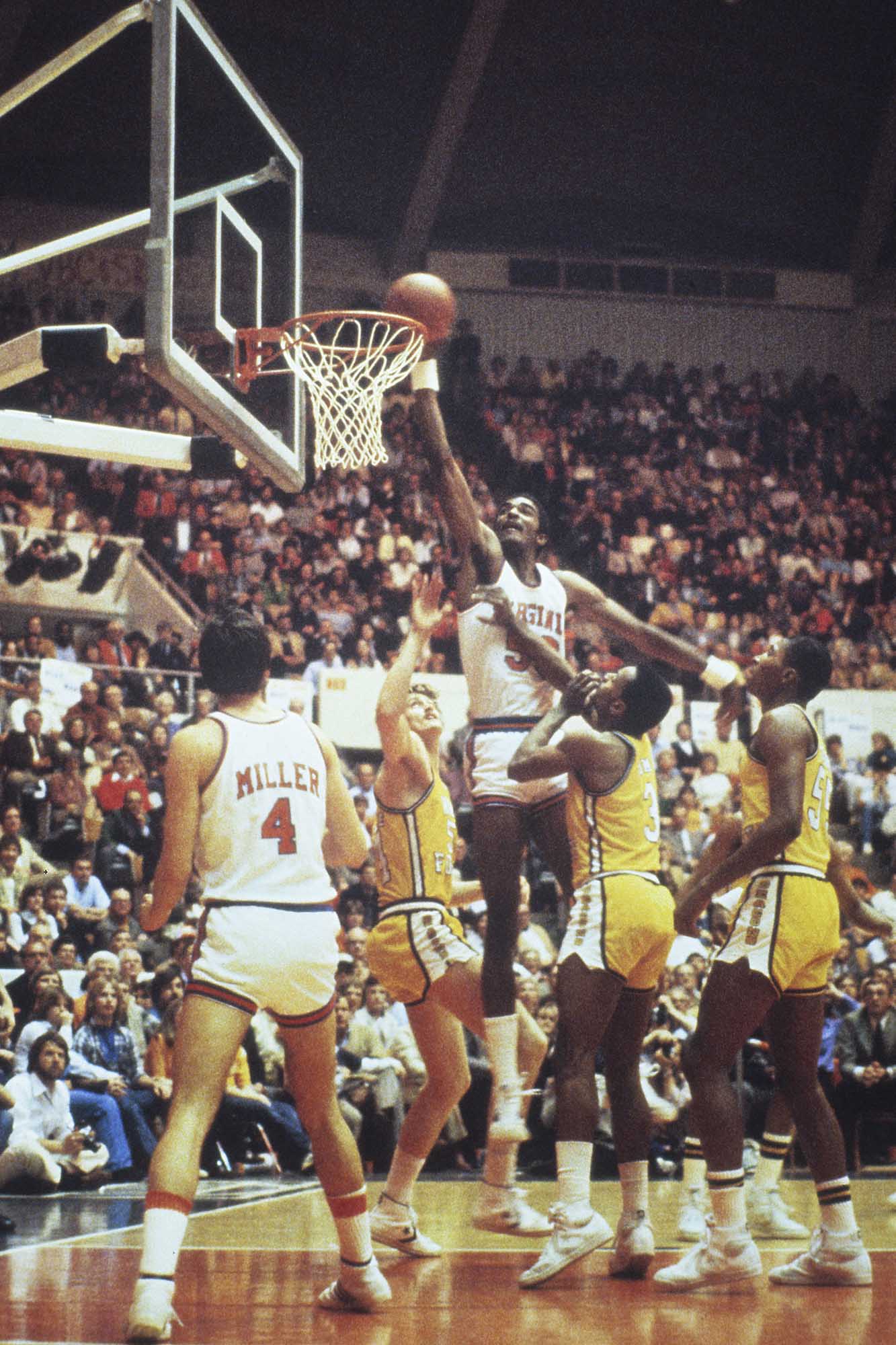 The skinny: Appearing in a bowl game for the first time, UVA defeated Purdue, 27-24, in the Peach Bowl at Atlanta’s Fulton County Stadium on New Year’s Eve.

Doughty: “They had lost to Clemson, 55-0, in the first game of the season and then went 8-1-2 over the rest of the season. That, in itself, was a pretty impressive accomplishment.

“What strikes me the most is that nowadays, there are certain bowl games that are seen as lesser bowls. At that time, there really were no lesser bowls. Virginia was a legitimate team. It wasn’t like they were some .500 team that got into a bowl because there were too many bowls. That was a team that earned its way into a bowl. It was a very good team.

“They were certainly not the favorite against Purdue. Purdue had Jim Everett as quarterback. It turned out to be an exciting game, a close game. After the game, the hotel lobby was just swamped. There was this huge party. Everybody was there.” 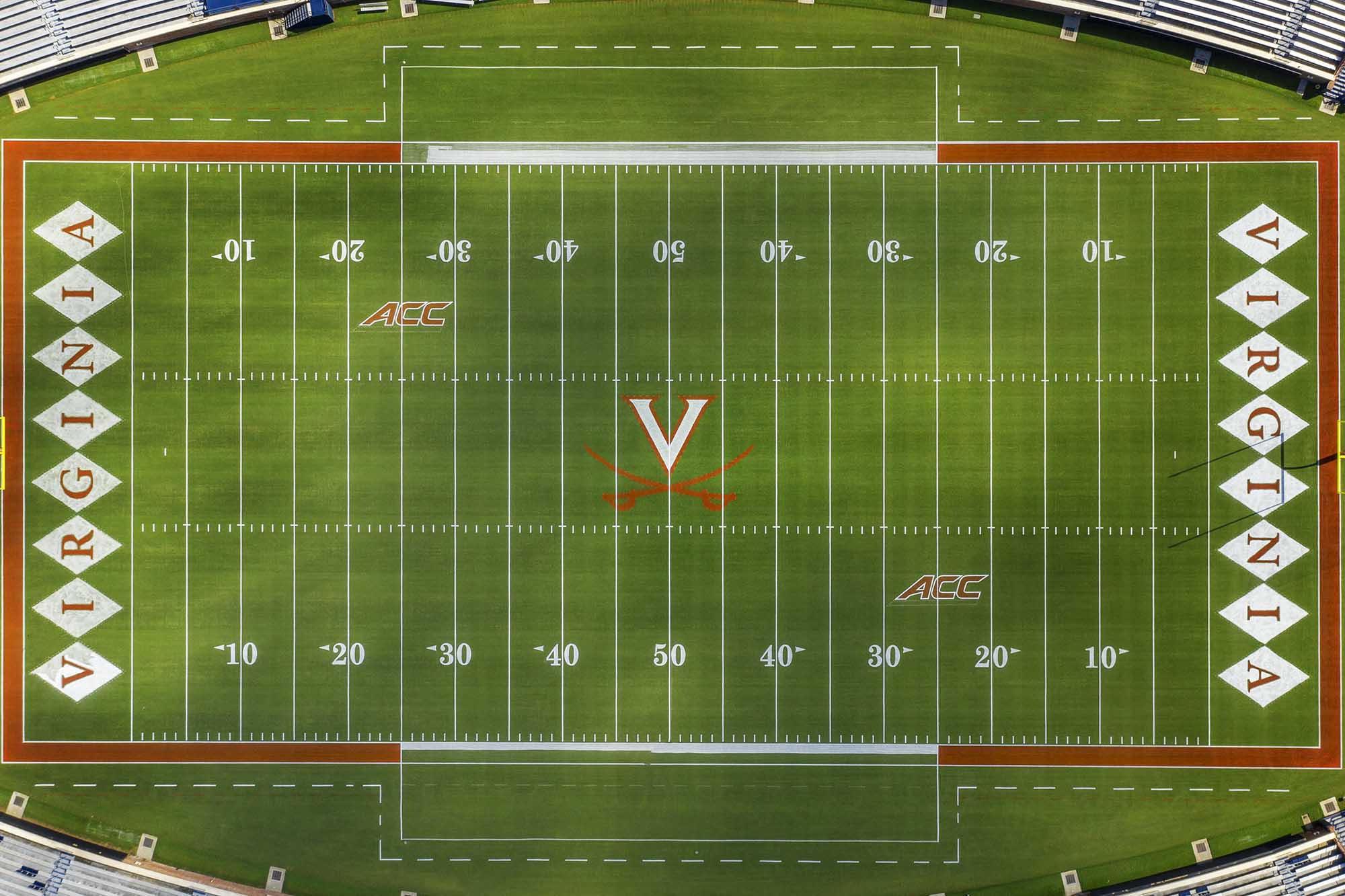 The skinny: The Hoos had gone 29 years without beating Clemson before a 20-7 win over the No. 9 Tigers at Scott Stadium.

Doughty: “That was huge. The media who covered that game got T-shirts saying something to the effect of, ‘I was there.’”

Doughty: “The win was the Cavaliers’ eighth in a 14-game span, including a tie, against the Tar Heels. Before that, UNC had gone 11-1 against UVA between 1969 and 1980. UVA cornerback Ronde Barber intercepted three passes and was named Sports Illustrated’s national defensive player of the week. Virginia did not have a turnover and downed three Will Brice punts inside the Tar Heels’ 20. The 1994 UVA team finished 9-3, including a victory over TCU in the Independence Bowl. It ended a four-game bowl losing streak for the Cavaliers.”

Doughty: “That was a shocker. It was the first time Miami had been shut out at home since 1974 and their most lopsided loss since 1944. Despite ending the season with losses to No. 8 Virginia Tech in Charlottesville and Texas Tech in the Gator Bowl, a 9-4 finish matched Al Groh’s highest win total in nine seasons as the Cavaliers’ head coach.”

A Year We Will Never Forget: 2019-20 in Review END_OF_DOCUMENT_TOKEN_TO_BE_REPLACED

‘What Will You Carry With You?’ Remarks From UVA President Jim Ryan END_OF_DOCUMENT_TOKEN_TO_BE_REPLACED