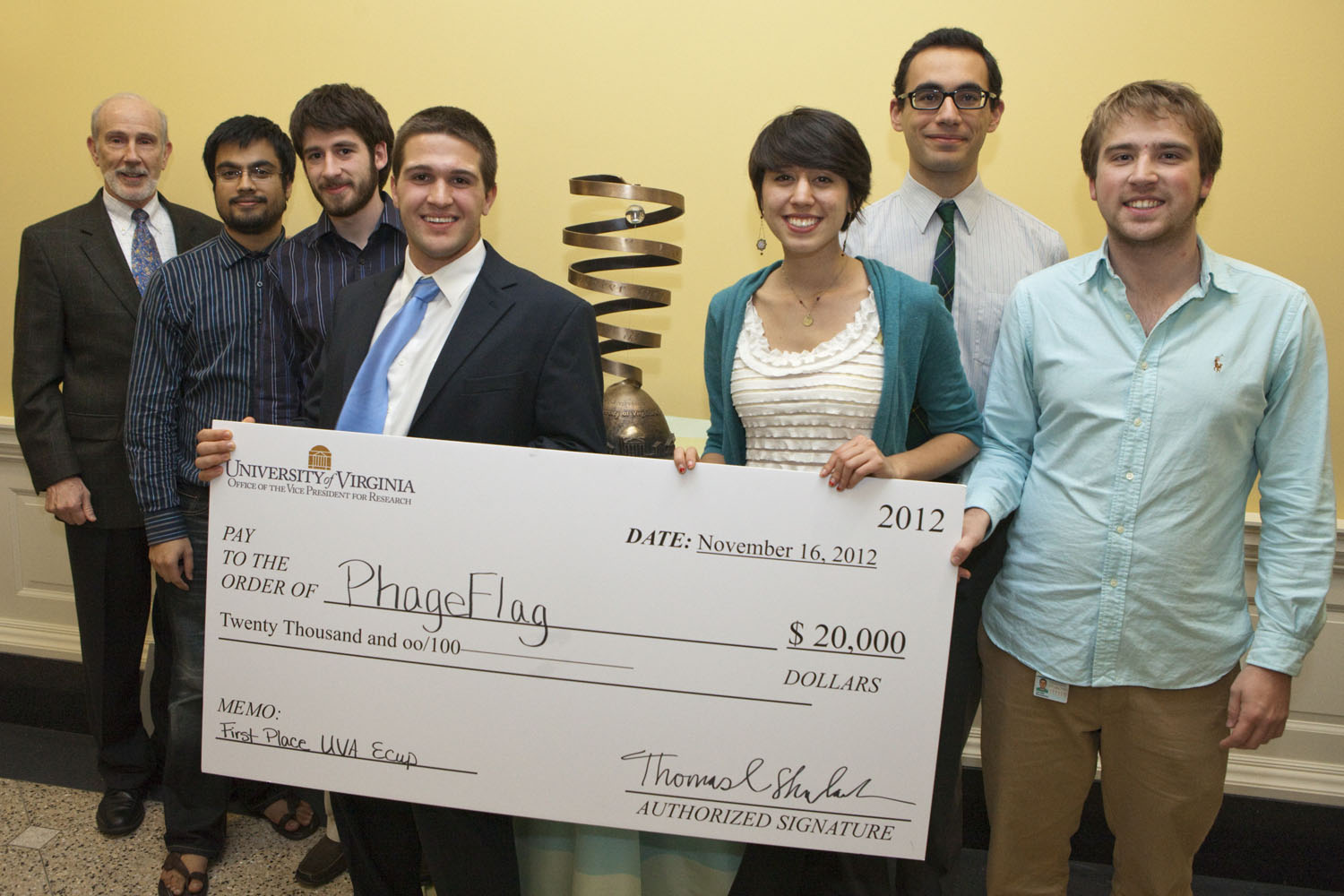 A student team developing a diagnostic test that could play a key role in the fight against whooping cough claimed the top prize of $20,000 at this year’s University of Virginia Entrepreneurship Cup, held on Friday.

The next three top finishers at the E-Cup took home prizes of $10,000, $5,000 and $5,000, respectively, for business plans to create a microscale catheter, a grilled-cheese food truck in Charlottesville, and software that generates personalized exam feedback in large lecture-style classes.

The competition, now in its fourth year, was hosted for the first time this year at the Curry School of Education, where a standing-room-only crowd of more than 120 squeezed into Bavaro Hall’s Holloway Hall to watch the culmination of a Universitywide competition for the most innovative and feasible business idea.

E-Cup judge Rob Patzig, senior managing director and chief investment officer at Third Security, a Virginia-based venture capital firm and sponsor of the E-Cup, said he was impressed with both the variety and quality of all the finalist teams. “We probably see 700 to 800 business plans per year, on average. We only invest in two or three companies a year, usually. Everything that I saw today would make the top 10 percent of all the business plans that I see any given year. The fact that you are not seasoned professionals who have all done this four or five times, that’s really astonishing to me – the quality of the thinking, the novelty of the ideas.”

U.Va. Vice President for Research Tom Skalak said, “The cup is about connecting all this talent and energy to the sources of capital and other supports to get these ideas out into the real world where they can make a difference.”

The first-place team, PhageFlag, had previously won the semifinal competition for the Health System track for their idea to combat whooping cough, which infects 30 million to 50 million people a year globally and kills about 300,000, mostly children.

The team presented plans for a diagnostic test that employs some clever genetic engineering to piggyback on the biological indicator process of home pregnancy tests, melding that indicator with bacteriophages, viruses that infect only a specific bacteria, much like a key only fits one lock. (The team’s key genetic engineering idea won a silver medal last month at a regional round of the International Genetically Engineered Machine, or iGEM, synthetic biology competition for undergraduates.)

In practice, a patient would cough into a sample tube containing the diagnostic phages, explained Shaun Moshasha, a fourth-year in the College of Arts & Sciences majoring in chemistry and physics. After a few hours, the sample would be added to a pregnancy test, which would only be positive if the patient had the target bacteria, Bordetella pertussis, that causes whooping cough.

The test will initially target whooping cough, but the basic design can be adapted “very easily” to detect any bacterial disease present in the saliva, including tuberculosis, chlamydia, gonorrhea, Lyme disease and MRSA, a deadly flesh-eating bacteria that is resistant to typical antibiotics, said team member Rachel Smith, a fourth-year biomedical engineering major in the School of Engineering and Applied Science.

By piggybacking on an over-the-counter pregnancy tests, the PhageFlag test is simple, low-tech, durable, low-cost and accurate, requiring no refrigeration or laboratory processing, with a shelf life of years, Moshasha said. Those qualities make it ideal for use in Africa, South Asia and other developing regions that suffer from the great majority of the worldwide disease burden from bacterial infections like tuberculosis and whooping cough.

“This is the kind of brilliant idea you don’t see very often. This changes diagnostics if it works,” said Patzig, whose venture capital firm focuses on life sciences investing. “The moment you said this, it’s so completely obvious that this is a smart way to do diagnostics using phages, I cannot believe no one’s ever done this before.”

The PhageFlag test was “no one person’s idea,” Moshasha said. Rather it was developed collaboratively by a large team, including fourth-year students Joe Muldoon, Alex Zorychta, Syed Hassan and John Hubczak, and third-year Josh Fass, along with six faculty advisers including Kim Kelly, assistant professor of biomedical engineering and a diagnostics expert, and Dr. Erik Hewlett, a professor of internal medicine and pharmacology, a whooping cough and infectious disease expert, and former associate dean for research in the U.Va. School of Medicine.

Taking home the E-Cup trophy was uniquely satisfying for fourth-year Smith because, as a first-year in a class taught by Dana Elzey, associate professor of materials science, she was part of the student team that created the trophy in 2009.

If the second-place winner eventually makes it to market, hospital patients in the intensive care unit may be able to finally sleep through the night, spared from the now common practice of being awakened hourly for painful lancet sticks to measure blood glucose levels.

The team representing the School of Engineering and Applied Science, HD MicroSampling, took home $10,000 for its HemoDrop microscale catheter. Inspired by a mosquito's proboscis, which can penetrate human skin without being felt, the HemoDrop catheter needle’s tiny size makes it much less painful than a traditional needle, biomedical engineering fourth-years Tim Higgins and Andrew Andreae explained.

Once inserted, the HemoDrop’s consumable sampling reservoir collects only a few drops of blood. Blood can then be measured at a central lab, providing more accurate measurements than the now standard disposable lancet tests, which “were never designed for use in a critical care setting,” Higgins said.

The two $5,000 honorable mention prizes went to the Virginia Toastie and TestConnect teams, representing the College of Arts & Sciences and the Social Entrepreneurship tracks, respectively.

The Virginia Toastie team of four first-year students – Evan Slotnick, Aaren Barge, Chris Cai and Ben Harris – presented plans for a food truck that would move around to serve “quick, cheap and healthy” grilled cheese sandwiches to at least three target customer groups: U.Va. students, including vegetarians; time-crunched U.Va. Health System workers; and students out late at night on Rugby Road. The team’s well-choreographed presentation featured understated humor that earned numerous peals of laughter, and compliments from the judges for being the most thorough presentation of the day.

TestConnect software will enable instructors to provide personalized exam feedback in large lecture-style classes, explained Rosemary Malfi, a Ph.D. student in environmental sciences. Designed for multiple-choice tests, the TestConnect software harnesses an “instructor feedback bank” containing relevant feedback for every question, such as pointing to a key textbook passage. Combining that feedback with exam records for each student, the software would automatically generate personalized exam feedback for each student, saving teachers a great deal of time, and providing more student-teacher interaction, Malfi said.

The other four finalists included: